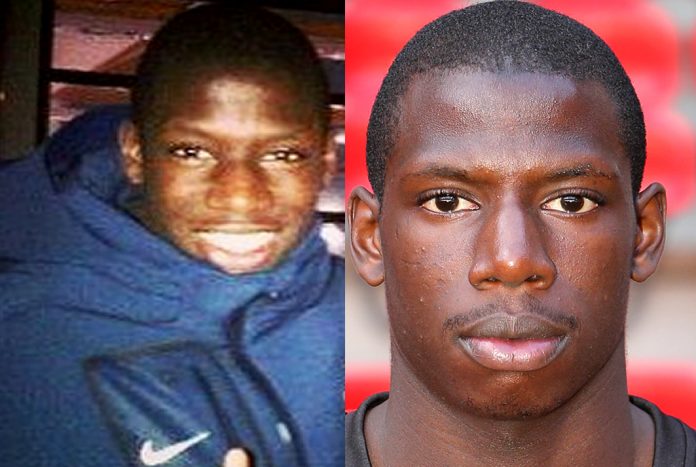 LifeBogger presents the Full Story of a Football Genius best known by the nickname “Doucs”.

Our Abdoulaye Doucoure Childhood Story plus Untold Biography Facts gives you a complete account of notable events from his childhood.

The analysis involves his life story before fame, family background and relationship life. More so, many other OFF-Pitch facts (little known) about him.

Yes, everyone knows he is a dynamic midfield ball-winner, a nifty passer and the current “heartbeat” of the Watford team.

However, not many soccer lovers have read Doucoure’s Biography, which is quite interesting. Now without further ado, let’s Begin.

For Biography starters, Abdoulaye Doucoure was born on the 1st day of January 1993 in Meulan-en-Yvelines, France. He was born as the second-youngest of eight children to Malian parents.

Doucoure grew up with his family in the underprivileged neighbourhood in Mureaux, West Paris.

As a child, during his early days, Doucoure was known as a game freak. On account of his experience with PlayStation, he said;

“You get used to waiting your turn to have a go on  PlayStation. For me, I made sure  i was  ready to take it when it comes. ITo continue giving in my best and never to relent. It’s the same in football.”

Back then, Doucoure attended a French-speaking school Doucoure which offered him the opportunity to passionately play competitive soccer during sports periods.

His former PE teacher, Mickaël Pellen knew his determination as a powerful force that would help make him big.

“I loved athletics when I was young,” says Doucouré as he continued to talk about his early sporting days…

“Back then I was a runner. I did some sprinting and love the long distance. cross country  where I won all the  races. I won big events and lots of titles for my  school.”

The Athletic Trait: Looking closely at his present-day pic, one would notice Doucoure has the physique of a middle-distance runner.

His athleticism was one element of his game that he harnessed properly. Also, in school during his early years, Doucouré was someone who would speak eloquently with mesmerizing charm and intelligence.

At the age of 12, he was elected by his classmates as one of his school’s municipal advisers.

Did You Know?? .., Doucoure used his advisory position to lobby his local government for the construction of proper football facilities near Vigne Blanche, located in his underprivileged neighbourhood in Mureaux, West Paris.

Shockingly, his legislative lobby went successfully. It is this intelligence he brings to football today.

The young French Lad was unable to join a club until he was 11. This was due to proximity and parental restrictions. In his words;

“To get to the only club in my area you had to cross a really busy road and my mother forbade me from going there.

She only relented when other residents went to her and said: ‘

Please You have to let him go, things are better structured there and he will be able to make a success of himself.’ “

After much persuasion, Doucoure’s parents (especially through his mum’s approval) allowed him to join the local youth team, OFC Les Mureaux. There, he got the chance to showcase and build his talent.

Abdoulaye Doucoure Biography – When the going gets tough:

At some point in his early development at OFC Les Mureaux, Doucoure felt it was time to move to greater heights.

This time, his parents saw him as a mature boy and would permit him to find his way to any football-playing location. This saw the teenager moving to apply for trials in the best youth clubs in Paris.

Sadly, his first trial at France’s prestigious Clairefontaine academy went unsuccessful. In explaining his account of the sad experience, Doucoure once said;

“That was a major disappointment because it is a legendary academy and it was a dream  if things had worked out. My trial failure  made me more determined to  move around and find a club,”

In that same year, 2007, Pellen, a scout for Rennes, recommended Doucouré to the Breton club. At Rennes, he had a successful trial and a fruitful youth career spell.

The year 2010, Doucouré rounded up his youth academy and was promoted to Rennes’ B side. Thanks to his amazing performance, that same year, he became hailed as one of the rising stars of European football.

This was just three years after his failed trial at France’s prestigious Clairefontaine academy.

“I’ve never given up on anything and I’ve always known how to be patient,” 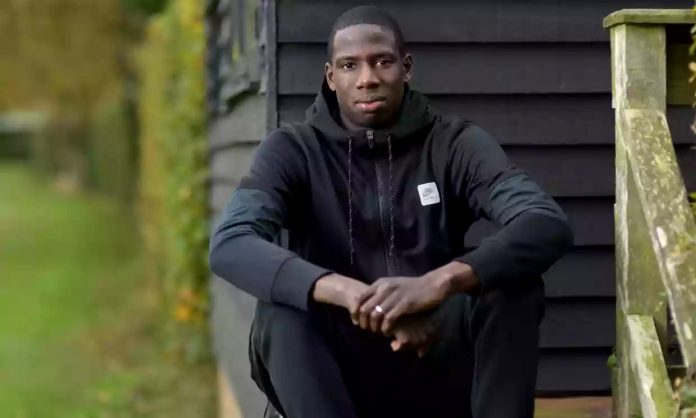 A statement once said by Doucoure as he reflects on how he has endured two severe injuries to the same knee.

This injury came shortly after his participation in the memorable European Under-17 Championship tournament. In the photo below, you would quickly notice he was a teammate of Paul Pogba. 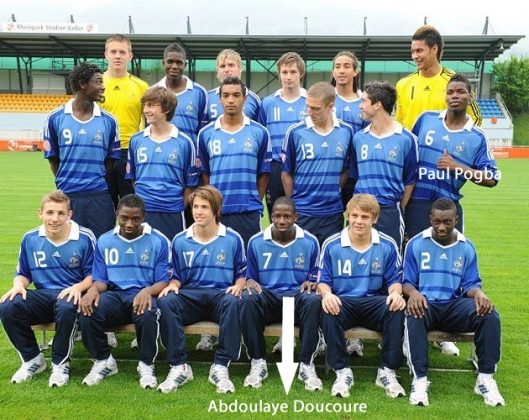 Doucoure was among France’s youth international selectors from under-17s all the way up to the 21s.

Tearing his cruciate ligaments in his left knee was his first serious injury. Doucoure continued to manage his injury until he left Rennes in 2016 for Watford. 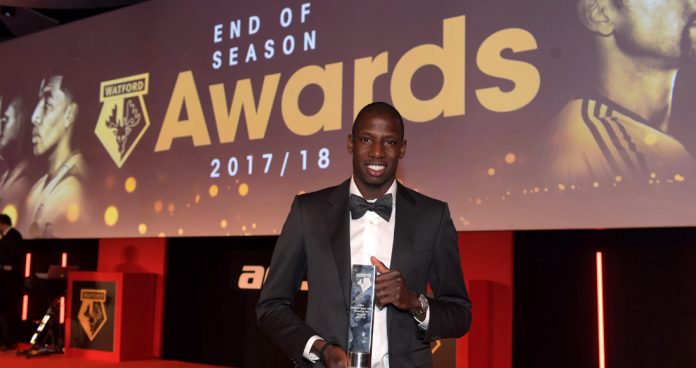 Did You Know?? Because of this injury, Doucoure was once set to leave Watford and was close to joining Lorient even before he could start a league game for the English club.

His only reason for staying was because the paperwork arrived 33 seconds late. Reflecting on this, he said;

“It was crazy. I was on the tarmac at Luton and was about to go on the private jet to sign the papers at Lorient and my agent called me and told me to stay here, that the deal was off.”

Yes, everyone usually has a sinking feeling when a flight is cancelled or delayed. However, this wasn’t the case with Doucoure.

He was happy the transfer paperwork didn’t go through. In his words;

“I was not disappointed as I did not want to go. I wanted to stay and fight for my place. My dream is England and I want to stay here.”

He once told Journalists.

The patient Frenchman had to wait a long time to overcome his setbacks and prove his ability. It took no time before Doucoure became the fulcrum of the Watford midfield.

He could drop deep to pick up possession, switch play from side to side and launch amazing passes (even no-look) and attacks.

Not much is known about his relationship life. However, online reports suggest Doucoure is married to his wife, who together lives with their daughter in Hemel Hempstead.

Doucoure named his daughter Benta after his mother, which emphasizes just how close he is to her.

Because of Her: Doucouré once turned Watford down in the summer of 2015. This was because his wife was pregnant, and he did not want to move.

Watford came calling again six months later, and Rennes accepted an offer of around £8m. This was a time Benta was already born. Speaking about his wife and England, he once said;

“My wife speaks English and we have a very good life in England. The people of England are very nice and I want to stay here a long time.”

Doucoure is a down-to-earth French man who loves to send money to his relatives both in France and his native Mali in West Africa. Speaking of Africa, he once said…

“I have a lot of family in Africa and I am very happy to send monies when they need it for medicine or hospital”.

French’s golden generation might have won the 2018 FIFA World Cup. It is pertinent to note that Doucoure belongs to this group and still keeps in touch with a notable member of this group. According to him;

“Pogba is still my friend. I speak to him and when we went to Manchester he gave me his shirt. We speak on phone. He’s a nice guy.”

Thanks to his performance, Doucoure has not given up hope of joining his friend in the Fench national team.

Abdoulaye Doucoure’s handball equalizer against Southampton gave football authorities reasons why VAR must be used in the game. 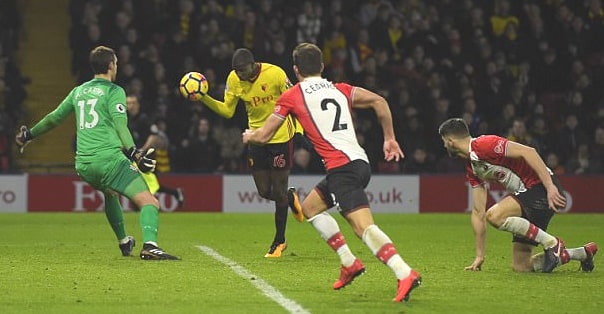 Judging from the photo above, Doucoure deliberately deceived the official by cheating and denying Southampton a win.
From his perspective, he chooses not to nudge the ball into the goal with his arm to avoid the risk of a collision with the Southampton goalkeeper.
READ FULL STORY:
Ademola Lookman Childhood Story Plus Untold Biography Facts

Thanks for reading our Abdoulaye Doucoure Biography Story. At LifeBogger, we strive for accuracy and fairness in our delivery of French Football Stories. The Life History of Corentin Tolisso and Laurent Koscielny will excite you.