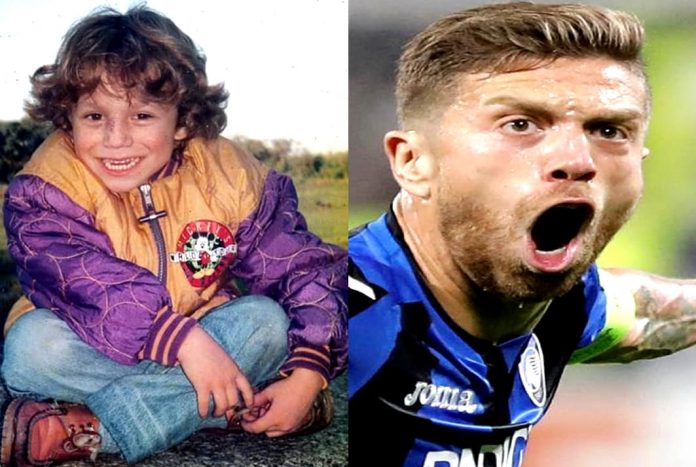 In the nutshell, this is a Life Story of the Argentine professional footballer. We begin from his boyhood days, to when he became famous.

To whet your autobiography appetite, here is his childhood to adult gallery — a perfect summary of Papu Gomez’s Bio.

Yes, everyone knows he is a great leader on the pitch- technically gifted and dynamic. However, only a few consider our version of Papu Gomez’s Biography which is quite interesting. Now without further ado, let’s begin.

For Biography starters, he bears the nickname “El Pachu“. Papu Gomez’s parents had him on the 15th day of February 1988 and gave him the names Alejandro Darío Gómez.
The name “Papu Gomez” is just a nickname. The talented footballer was born in the city of Buenos Aires, Argentina to parents whom little is known about at the time of writing this bio. Below is a photo of Papu Gomez’s parents- his look-alike dad and beautiful mum.
Gomez is an Italian-Argentine national of mixed ethnicity with South American family origins. He was raised at Avellaneda in his birth city – Buenos Aries – where he grew up alongside his sister Monica.
Growing up in a middle-class family background at Avellaneda in Buenos Aries, young Gomez practically lived and breathe football during his formative years.
The family house of young Gomez was not far from the stadiums of local clubs Independiente and Racing. In fact, it was close enough for him to comfortably go there on a bicycle.
What more? Gomez’s uncle was a part of the Independiente team which won the Intercontinental in 1984 while his father worked with the club. There’s no denying the fact that football was in the air for young Gomez.

Unlike most Argentines, particularly kids of his age, Gómez didn’t grow up singing the praises of Diego Maradona. His idols were rather Argentine Legends – Pablo Aimar, Juan Román Riquelme and Sebastián Verón.
In addition, Gomez was very much invested in local clubs, he was a big fan of Independiente (where he also had a number of idols) and had the most of his career buildup at local club Reading.

Reading was young Gomez’s boyhood club, an outfit where he took his early steps in competitive football, learning and perfecting skillsets that he never knew would take him beyond the South American continent in just a few years.
By the time Gomez was aged 14 he joined Arsenal de Sarandí and rose through the ranks of the Argentine club, helping its youth side win the 2005 Copa Tandil title before making his first-team debut in 2006.
Gomez spent 6 years at the club with his best performing year being 2007 when he contributed goals that helped his side win the Copa Sudamericana finals against Club America on away goals rule.
Subsequent football endeavours saw Gomez had an impressive one year spell at Argentine club San Lorenzo de Almagro, a development which led Italian side – Catania to secure his services.

While at Catania, Gomez’s form drew interest from top-flight clubs including Athletico Madrid, Fiorentina and Inter Milan. However, he chose to play for little known Metalist Kharviv of the Ukrainian premier league.
Reasons for Gomez’s uncommon move bordered on the fact that he was confident of improving at the Ukrainian side and getting the opportunity to be an integral part of the club’s participation in an upcoming Champions League.
Sadly, the forward’s expectations were not met at Metalist Kharkiv. To start with, UEFA upheld Metalist’s ban from the league citing the club’s involvement in a 2008 match-fixing as a strong reason.
To make matters worse, Gomez was unhappy that the club lacked quality and visibility coupled with the language barrier which made him feel lost.
It wasn’t long before he declared his intention to opt-out of his contract by accepting half salary but the request was not granted.

Gomez refused to return to Metalist the following season citing the violent and volatile climate that engulfed Ukraine, neither did most foreign players return for the same reason.
It wasn’t long before Gomez was acquired by Italian Side Atlanta in the last hours of the summer transfer window in Italy.
The forward had an impressive decent debut 2014/2025 season with the Atlanta and went on to establish himself as one of its leading goal scorers and providers of most assists.
He even captained Atlanta to a historic third-place finish in the 2018–19 Serie A season, a position that earned them a spot in the 2019–20 UEFA Champions League, as well as the 2019 Coppa Italia Final. The rest, as they say, is history.

Moving on to Papu Gomez love life, he is respectably married to his girlfriend turned wife Linda and has not been involved in premarital or extramarital controversies. Neither are there available records of Papu Gomez’s girlfriends before he met Linda.
Linda is not just Papu Gomez’s wife but his number one fan as well as a career woman who works as an architect. The couples marriage is blessed with three kids at the time of writing they include Bautista (son) Constantina (daughter) and milo.

Family without doubt makes his career and love life more illustrious. In this section, we bring you more facts about Papu Gomez family members beginning with his parents.
About Papu Gomez father and mother: To start with Gomez’s parents, he doesn’t reveal much about his father and mother.
The little we know about the supportive parents comes from an interview in which Gomez briefly revealed that his father works with local club Independiente. He also acknowledged his mom has been one of the most important women from his early life to date.
About Papu Gomez siblings and relatives: Papu Gomez has a sister identified as Monica while it’s not certain whether he has brothers and sisters asides Monica.
There are no further records of Papu Gomez’s family roots and ancestry particularly his paternal grandparents as well as maternal grandfather and grandmother.
One of Gomez’s uncles has been identified as Hugo while his aunts, cousins, nephews and nieces are largely unknown.

Do you know that Papu Gomez does not necessarily need to be on the news for good form to court attention? His off-pitch personality – which is much defined by Aquarius Zodiac sign – constantly puts him in the limelight.
He is cool, unique, action-focused, sincere and rarely reveal facts about his private and personal life. Gomez’s interests and hobbies include watching movies, swimming, playing video games, playing tennis, cooking and spending quality time with his family and friends.

Speak of how Papu Gomez makes and spends his money the estimated sum of the striker’s growing net worth is fed by wages and salaries that he receives for playing top-flight football while analysis of his spending habits reveals that he lives a luxurious lifestyle.
Evidence of such lifestyle includes his ability to board private jets for travels to luxurious vacation sites. In addition, the striker has expensive cars parked in beautiful garages of his house and apartments.

To wrap up our Papu Gomez childhood story and biography, we present little or Untold facts about the football genius.
Smoking and drinking: Although Gomez has not been seen smoking, he is big on drinking and was once spotted enjoying a jug of beer with his wife Linda. Notwithstanding, it is certain that the forward drinks responsibly to safeguard his health and prevent occasions of public ridicule.
Religion: There are no records of Papu Gomez being explicit about his religion. However, the odds are greatly in favour of him being a Christian as evident in the name of his son Bautista and daughter Constantina. This implies that Papu Gomez’s parents possibly raised him a Christian.
Tattoos: Gomez ranks among several Argentine-born football geniuses who are big on tattoos. The forwarded has colourful body arts on his arm, chest, legs with enough space to add more arts by the years.
About his nickname: Do you know that Gomez’s nickname “El Papu” has something to do with his diminutive height of 5 feet 5 inches.
The nickname which is believed to have been given to the forward by his mom is culled from “Papuchi” which means “short stature”.
Armbands: Asides being a football genius Papu Gomez is famed for his style and originality thanks to his wife who makes beautiful captain armbands for him.
The armbands either pays tribute to football greats or commemorate special occasions in football as well as in the life of Gomez’s family.

FACT CHECK: Thanks for reading our Papu Gomez Childhood Story Plus Untold Biography Facts. At LifeBogger, we strive for accuracy and fairness.