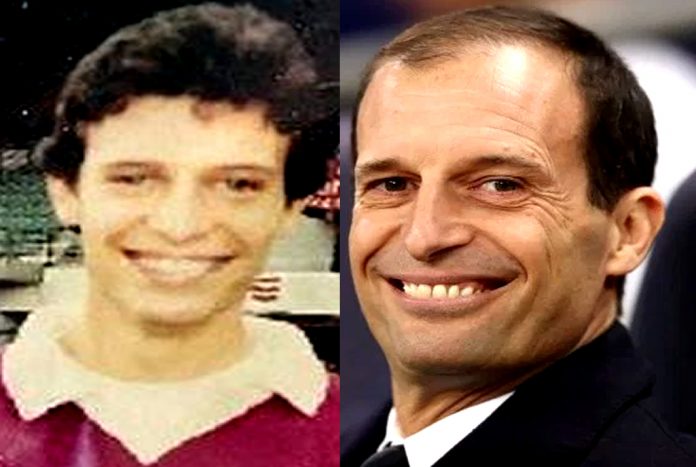 LB presents the Full Story of a Football Manager who is best known by the nickname “Anchovy“.

Our Massimiliano Allegri Childhood Story plus Untold Biography Facts bring to you a full account of notable events from his childhood time to date. The analysis involves his early life, family background, life story before fame, rise to fame story, relationship and personal life etc.

Yes, everyone knows he is one of the best coaches in Serie A. However, only a few consider Massimiliano Allegri’s Biography which is quite interesting. Now without further ado, let’s Begin.

Starting off, Massimiliano Allegri was born on the 11th day of August 1967 at the city of Livorno in Italy. He was the first of two children born to his mother, Carla Allegri and to his father Augusto Allegri.

Young Allegri was raised in the district of Coteto, in Livorno where he grew up alongside his younger sister Michela.

Growing up in the district, Allegri was a sport-loving kid who juggled sporting interests between horse racing and football. He was however more drawn to horse racing, a sport which he fell in love with after his grandfather took him to a racecourse when he was only aged 5.

The youngster remained passionate about horse races and all that it entailed including placing bets which he sometimes won or lost. Allegri soon became an owner of horses to make his passion for the sport complete. Such was life for the happy kid.

Allegri’s passion for horseracing registered a sharp decline after forced schooling and tough parenting set him on the path of building a career in football. The teenager never liked schooling and being forced by his parents to regularly attend classes added fuel to his hatred.

“Massi, you can’t skip school! You need to take these exams! You need to sit still and learn about Napoleon!”. Recalls Allegri of his parent’s attempt to overcome his hatred for schooling.

While Allegri put up with the forced schooling he figured out that he wasn’t meant to be a good student but could fare well in other endeavours and might as well become an administrator of the school.

“I remember sitting in class one day, and the teacher was mad at me about something, and I had this realization. I remember saying to myself: ‘I am not meant to be a good student. But I could be a good principal'”. He thought.

In the same light, the competitive football games he played as a teenager for his hometown club Livorno, confirmed his aversion to followership and drives for leadership.

“Even when I was on the football pitch as a teenager, I wanted to be the teacher. I had a few passionate discussions with my own coaches, but it wasn’t for more playing time or anything like that. It was because, even then, I wanted to run the team my own way”. He recalled to Players Tribune.

The coaching prodigy dropped out of school when he was aged 16 to focus on football. He spent 8 years playing for the first team of Italian clubs that include: Cuoio Pelli Juventus, Livorno, Pisa and Pavia before joining Pescara in 1991.

While at Pescara, Allegri established himself as a midfielder and developed a close relationship with his coach turned mentor, Giovanni Galeone. It is worthwhile to note that Galeone was an impressive coach whose managerial prowess made “control-seeking” and stubborn Allegri humble for years.

“I spent seven years with him, Galeone was very imaginative and had innovative concepts” admits Allegri.

After 19 years of playing professional football, Allegri embraced retirement with Aglianese being the last club he played for. He thereafter began his managerial career with the Serie C2 team of Aglianese and had an impressive season with them.

2014 was the year in which Allegri became the new head coach of Juventus. Although Allegri’s appointment was not welcomed by many who considered him unfit to take over from Antonio Conte, he has so far proven to be a first-class coach by leading Juventus to four consecutive Coppa Italia titles, two champions league finals among other achievements. 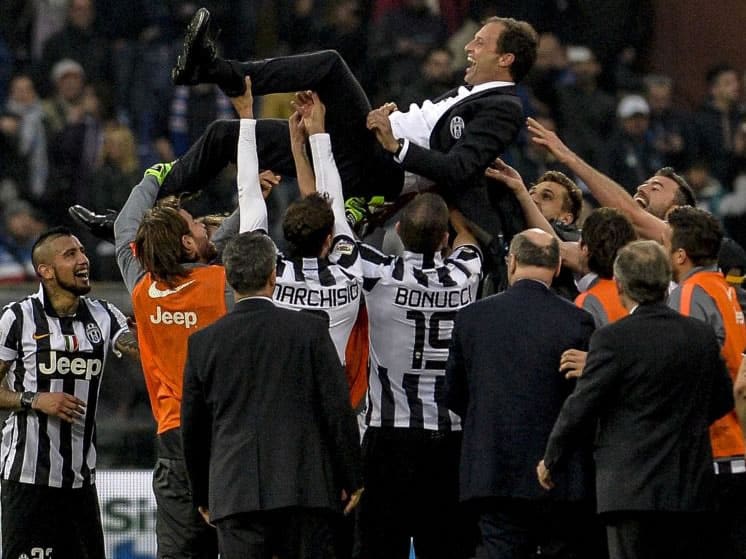 Massimiliano Allegri has been married once. We bring you information about his dating history, marriage and subsequent relationships.

First was his relationship with a beauty called Erika in 1992. The lovebirds dated to the point of being engaged and were billed to get married. However, Allegri amicably ended the relationship and called off their planned wedding ceremony 24 hours to the event. Erika who was a college student at the time supported Allegri’s decision and they both went separate ways.

Subsequent relationships saw Allegri get married to Gloria Patrizi in 1994. Their marriage was blessed with a daughter Valentina Allegri (born 1995). However, the union didn’t last long as they got separated after 4 years of marriage.

Moving on Allegri began dating Claudia. All seem well for the duo who suddenly got separated while Claudia was pregnant with Allegri’s first son Giorgio. The boy was given birth to in 2012 months after his parents had called it quits.

Allegri as of 2019 currently dates actress Ambra Angiolini. They both live together with reports suggesting that they might soon pull off a secret wedding soon.

Allegri was born into a family of 4. We bring you factual details about members of his family.

Allegri’s dad is Augusto Allegri. Augusto is a responsible father who catered for his wife and children by working menial jobs at a seaport including lifting boxes with his bare hands. He is no doubts close to Allegri who speak well of him at any given opportunity.

Massimiliano Allegri’s mother is Carla Allegri. She used to work as a nurse before taking up a job at a cleaning company to raise more money for the family’s upkeep. She sadly passed away in May 2018 at the age of 74.

About Allegri’s Sibling: Allegri’s has not a single brother but enjoys the company of his loving younger sister called Michela. Unlike her elder brother, Michela has endearing qualities to her credit including being calm and outgoing.

Many have over the years considered Allegri to be a cold and aloof individual. Little do they know that he decisively opted for detachment as it helps him to be a better manager.

His decision to live a private life might not be unconnected to the barrage of criticisms that he has become used to. Speaking with GQ magazine in 2016 Allegri acknowledged the popular set of criticisms making the rounds in the following manner.

“‘Allegri is a jerk,’ they said. ‘He plays at the casino, he bets on horses, he leaves a bride at the altar, he’s just crazy in the head.'”

Nicknamed ‘anchovy’ for his thin frame, Allegri has a confident persona and is famed for his ability to observe and flexibility in tackling problems from different points of view.

FACT CHECK: Thanks for reading our Massimiliano Allegri Childhood Story plus Untold Biography Facts. At LifeBogger, we strive for accuracy and fairness. If you find something that doesn’t look right, please share it with us by commenting below. We’ll always value and respect your ideas.