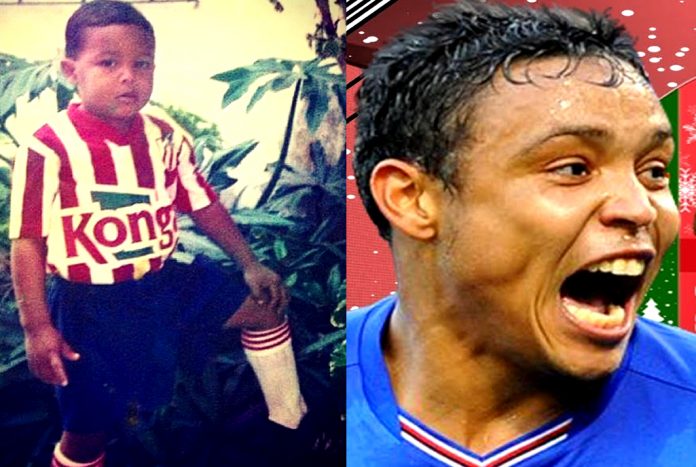 In the nutshell, this is a Life Story of the Colombian professional footballer, from his boyhood days to when he became famous.

To whet your autobiography appetite, here is his childhood to adult gallery — a perfect summary of Luis Muriel’s Bio.

Yes, everyone knows of his ability to score magical goals and create scoring opportunities for his teammates.

However, only a few consider our version of Luis Muriel’s Biography, which is quite interesting. Now, without further ado, let’s begin.

Starting off, he bears the nickname “The Colombian Ronaldo”. Luis Fernando Muriel Fruto was born on the 16th day of April, 1991 at the municipality of Santo Tomás in Colombia.
He was born to his mother, Elizabeth Fruto and to his father, Luis Muriel sr. Below is a photo of Luis Muriel’s parents, who appear to be in their late 40s.
The Colombian national of Latino ethnicity with South American family origins was raised at his birthplace in Santo Tomás, where he grew up alongside his brothers, Luis Alberto and Jesus. Here is a cute photo of Luis Muriel as a kid. 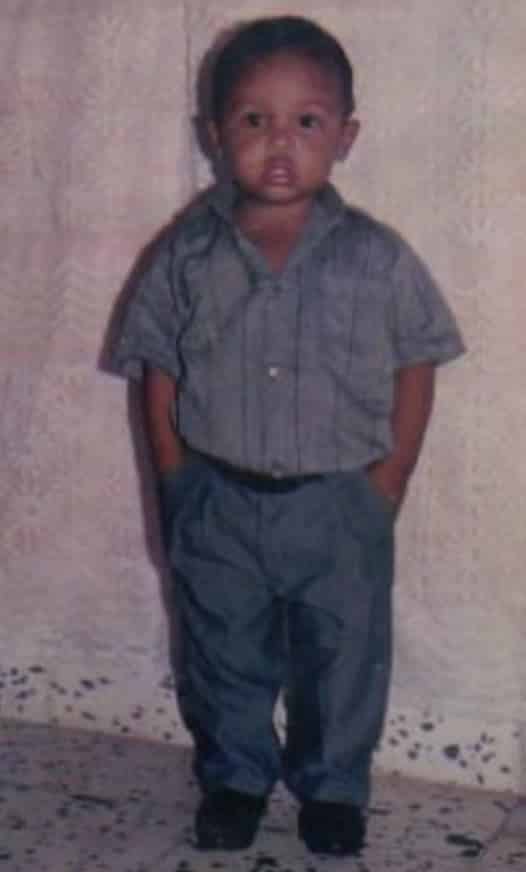 Growing up in a lower-class family background setting at Santo Tomás, young Luis was only 5 years old when he began playing football at a local pitch not far from his family house.
“He was productively restless about football which became his breakfast, lunch and dinner.
More intriguing was the fact that he also had the hunger to become not just professional but a great professional.”
Recalled a close family friend – Humberto Barrera.

It wasn’t long before Muriel began training with the school team of Santo Tomás (Saint Thomas) where he studied and learnt the basics of competitive football.
Thereafter, a 10-year-old Muriel joined the youth systems of Athletico Junior, which was the biggest team in town and became alert to the possibilities of achieving his childhood dreams.
However, Muriel had challenges with training at Athletico Junior due to his family’s poor finances.
As a result, he joined his brothers and cousins in selling cassava buns made by their grandmother and used a part of the profits accrued from the sales in covering the cost of training at Athletico Junior.

Did you know that Muriel’s rise through the ranks of Athletico Junior was almost ruined by a serious injury that made him gave up on football when he was aged 13?
Upon recovery, Muriel was convinced by his former coach to get back into the sport and he went on to become Athletico Junior top scorer in a national tournament.
By the time Muriel was aged 17, he joined Deportivo Cali where he started his professional career.
It was at the club that the football prodigy pulled off impressive goals and stellar performances that earned him the nickname “the Colombian Ronaldo”.
The nick was in comparison to former Brazil striker Ronaldo De Lima who he unarguably shares a physical resemblance with.

Midway into his debut season with Deportivo Cali, Muriel drew the attention of Italian Side Udinese which secured his services in 2010 and loaned him out for two seasons, first to Granada and thereafter Lecce.

The period was very complicated for Muriel who had a hard time getting used to a new culture, food, people and most importantly European football.

When the young striker eventually completed his loans tenure and returned to Udinese, he had become overweight and was tasked with going through the harrowing experience of shedding fats before the start of the 2012/2013 season.

Muriel went on to record a sharp decline in form during the following season as he again, struggled with weight issues and to cap it all, picked up an injury.

It wasn’t until the start of the 2015 season that Muriel’s fortunes began to change for good when he joined Sampdoria on loan and went on to secure a permanent contract with the club by establishing himself as a consistent goal scorer.
Fast forward to the time of writing, Muriel is a key striker for Italian Side Atlanta (en route Sevilla and Fiorentina) where he has stats speaking well for him with an impressive record of 10 goals in 15 appearances! The rest, as they say, is history.

Away from Muriel’s career ups and downs, his love life has been on an all-time high ever since he got married to his beautiful girlfriend turned wife, Paula Renteria.
Not much is known about when the couples began dating and got married neither is it known whether Muriel had previous girlfriends before his marriage to Paula Renteria.
Paula is not just a beautiful wife but Muriel’s number one fan. Muriel loves Paula beyond measure and sometimes dedicates his goals to her.
Their marriage is blessed with three cute girls at the time of writing they include Maria Camila, Maria Paula and Maria Celeste.

Moving on to Luis Muriel family life, the football genius is big on family and never ceases to acknowledge that he was blessed to have a loving and supportive family.

In this section, we bring you facts about Luis Muriel Family members beginning with his parents.

Luis Muriel Sr is the father of the football genius. He worked as a taxi driver during the striker’s early life and was very supportive of the life and rise of the football genius.
Little wonder Luis promised to buy his dad a taxi when he was a child. He fulfilled the promise years later when he got paid his first salary at Deportivo Cali.
Thanks to Muriel’s breakthrough, his dad doesn’t have to work anymore but live to enjoy the sacrifice he made to ensure his oldest son’s success.
About Luis Muriel’s mother:
Elizabeth Fruto is Luis Muriel’s mom. She is of Latino family roots like her husband and helped raise Muriel and his siblings.
The football genius credits her for yelling at him – like a second coach – to be on top of his game and bring home trophies.
Elizabeth tries her possible best not to miss Muriel’s games. What more? Her unconditional love always reminds the football genius that maternal love is timeless!.

Luis Muriel is the oldest son born to his parents. He has two siblings identified as Luis Alberto and Jesus.
The former was building a career in football at Deportivo Cali in 2015 while the latter was studying veterinary medicine during the same period.
There are no records of daughters born to Muriel, his parents, as the odds are greatly in favour of the striker having no sisters.

Moving on to Luis Muriel’s extended family life, there are no records of the striker’s ancestry, particularly those of his paternal grandparents as well as maternal grandfather and grandmother.
Similarly, not much is known about Muriel’s uncle, aunts and cousins. While his nephew and nieces are yet to be identified at the time of writing this bio.

Have you ever thought about what makes Luis Muriel tick? Have you tried hard to figure the essence of his off-pitch personality?
Then keep reading as we reveal facts about the playmaker’s persona in order to help you get a complete picture of him. To start with, Muriel’s persona reflects traits exhibited by individuals guided by Aries Zodiac sign.
He is easygoing, energetic, ambitious, emotionally intelligent and has no problem with revealing facts about his private and personal life.
The striker’s interests and hobbies include going out for leisure walks. Also, playing the accordion, horse riding, scuba diving, underwater exploration. As well as spending good time with his family and friends.

Do you know that Luis Muriel has an estimated net worth of over $8 million? At the time of writing his Biography.
Constituents of Muriel’s net worth take form in the salary and wages that he receives for playing football. While analysis of his spending habits reveals that he lives a luxurious lifestyle.

Pointers to the striker’s luxurious lifestyle include his little known house at Philly. As well as the expensive apartments he lives in when plying his football trade at different clubs. In addition, Muriel possesses a number of exotic cars which he rarely flaunts.

To wrap up our Luis Muriel childhood story and biography, we present lesser-known or untold facts about the striker.

Luis Muriel – with a height of 5 feet 10 inches – has tattoos on the upper part of his body. The striker is yet to reveal the meanings behind the body inks. However, some seem to be self-explanatory especially the cross at his back.

The Colombian international is not given to taking hard drinks. Neither has he been spotted smoking at the time of writing.
With such a healthy habit, the striker joins the league of football players. People who take their health seriously and would not do anything to compromise it.

The striker, like Bruno Guimarães, loves pets, particularly dogs. He is often seen taking them out for a walk or riding with them in his cars. His wife and children also share Muriel’s liking for Dogs.

Muriel, like Luis Diaz and Yerry Mina, is big on religion and often professes his faith, which is nurtured by Catholicism.
The striker revealed in an interview that he believes in God. Adding that his entire household has the blessed Virgin Mary and follows the teachings of the Church.

FACT CHECK: Thanks for reading our Luis Muriel Childhood Story Plus Untold Biography Facts. At LifeBogger, we strive for accuracy and fairness.