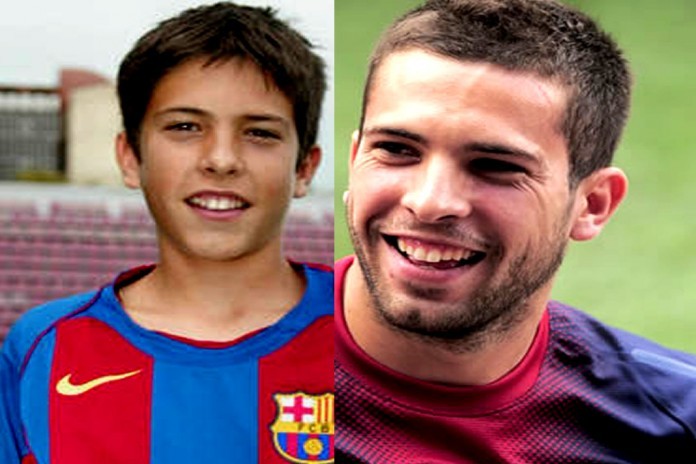 Lifebogger presents the Full Story of a Football Genius best known by the nickname; “Moto GP“.

Our Jordi Alba Childhood Story plus Untold Biography Facts brings to you a full account of notable events from his childhood to date.

The analysis involves his life story before fame, family life and many OFF-Pitch little-known facts about him.

Yes, everyone knows he is a fast attacking left-back with pace and stamina. A Baller who has motivated other Spanish Left-Backs – the likes of Marc Cucurella and Marcos Alonso.

However, only a hand few fans know much about Jordi Alba’s Bio which is quite interesting. Now, without further ado, let’s Begin.

For Biography starters, Jordi Alba Ramos was born on the 21st day of March 1989 at L’Hospitalet, Spain. He was born into the Catalan ethnic group to his mother, Maria Jose and father, Alba Miguel.

Being born and bred in the second-largest municipality in Barcelona meant a high chance to take football as a hobby thanks to a city known more for football than any other thing.

Little Jordi grew up playing football with his brother David Alba in the L’Hospitalet neighbourhood of Barcelona.

Growing up, he had his early education at Barcelona school of Spanish which gave him the opportunity to passionately play competitive soccer during sports periods.

At the age of 7 in the year 1996, Jordi Alba’s family decided to make their son take football as a career.

That same year, little Jordi Alba started his footballing journey with his Catalonia native club Hospitalense. He was deemed the smallest, the bravest and the captain of his team as noticed below.

Despite being so small which was a limitation, Jordi showcased a blistering pace that tempted the then youth manager to accept him with hopes that he would grow taller in coming years.

Alba actually his career in the youth ranks of Barcelona as a left-winger. He enjoyed his early times at the club. One of his memorable moments involves him having dinner with former FC Barcelona head coach, Louis Van Gaal.

As showcased in the photo below, both sat on the table discussing Jordi’s best position of play in football. 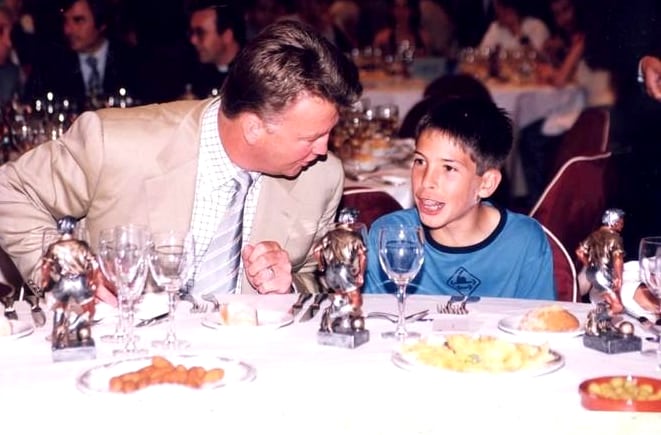 Having a high rate of development and fraternizing with Louis Van Gaal doesn’t guarantee favouritism in Barcelona’s Le Masia academy. Jordi Alba had one major problem. The fact that he was being “too small”.

While his teammates grew taller with their ages, poor Jordi suffered from stunted growth. This caused heavy debates among the Barça Infantil B management even though Lionel Messi was pardoned.

In 2005, Barcelona released Jordi Alba for being deemed “too small and thin”. Little did they know he would appear in the FIFA world cup 5 years later.  It is pertinent to note that Jamie Vardy suffered the same fate as a youth footballer.

Frequent intake of growth supplements was merged with a barrage of on-pitch speedy displays. Growth finally came which corresponds with a time Jordi attained the nickname “MotoGP” 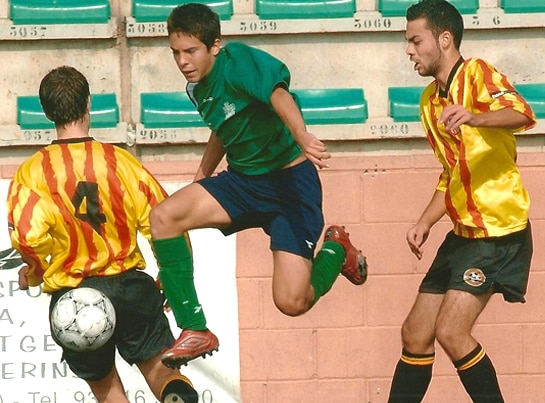 After two years which saw him grow taller, FC Valencia decided to cash in on the left-back for a fee of €6,000.

It was at Valencia Jordi Alba finally finished his youth career after helping its youth team get a promotion to the Tercera Division.

Alba made his professional debut in the 2008/2009 season. His outstanding performance in the 2010 FIFA World Cup eventually attracted FC Barcelona, who first pleaded for mercy and forgiveness.

Jordi Alba forgave his old club and joined them in 2012. The rest, as they say, is now history.

Football is a golden tree, a place where Jordi Alba in his youth have found shade and solace thus making him a great person. Now, behind this great Spaniard came a wag who rolled her eyes into his heart.

Starting off, Jordi Alba in 2009 (the year he got into the Spanish U20 team) started a relationship with his ex-girlfriend Mellisa Morilas.

Melissa, who spent the last 3 years with the footballer, is a student and they met at a popular Valencia nightclub. 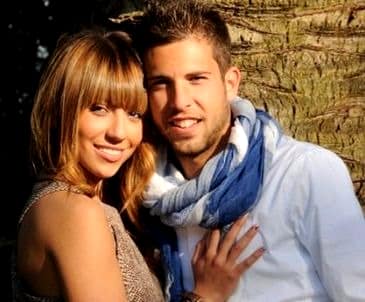 The sizzling Spanish girl kept Jordi on close surveillance and away from the prying eyes of other wags. This, by implication, meant she was a jealous lover.

Jordi has also said she has temper issues and treated him as if he was a kid as seen from the picture below. 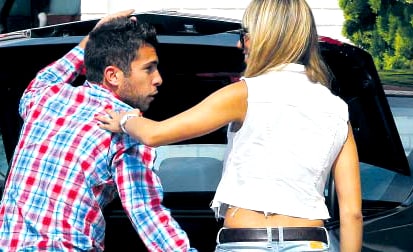 Mellisa once said that she sees Jordi as capable of “being humble and very loving with THE GIRLS”. She once revealed to the Spanish press that her boyfriend is “Always on Surveillance and Good in Bed”.

Melisa’s Continuous surveillance as time went on didn’t go down well with Jordi Alba. This led to the end of their relationship, which lasted for four years.

In 2014, the year of the FIFA world cup, Jordi started dating Romarey Ventura. They were seen together before 2014 but previously denied having affair. 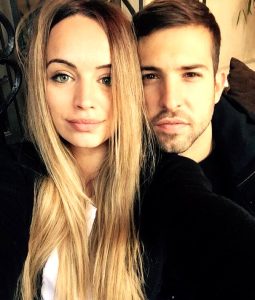 Romarey is from Sevilla. She was once a student of Tourism in the university and is also involved in modelling.

The pair have shared several photos together (notable beach photos) some time back while they were rumoured to be dating each other. 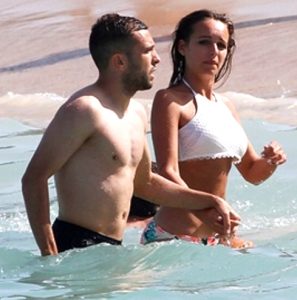 In addition, Romarey Ventura has a good relationship with Alba’s sister in law (David’s wife).

Some time back, both Jordi and Romarey wanted to show their happiness to the fans. As of August 2017, Romarey Ventura was pregnant with their first child.

She posted a photo on Instagram with Alba in it in which he’s touching her stomach. “full of lots of love” she wrote. 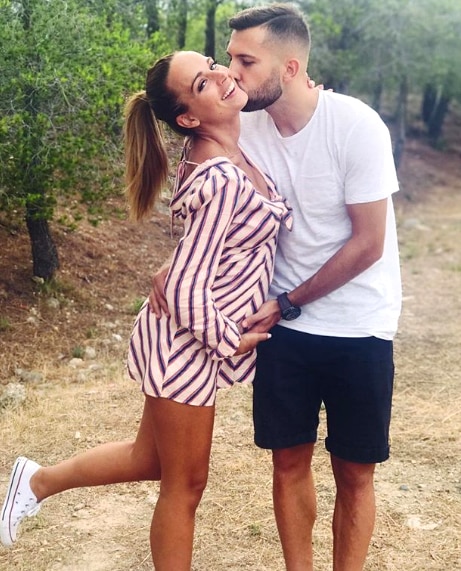 The parents of Alba must be happy because his brother David is expecting a child with his partner, Carol, at this same time. “seems both planned it” 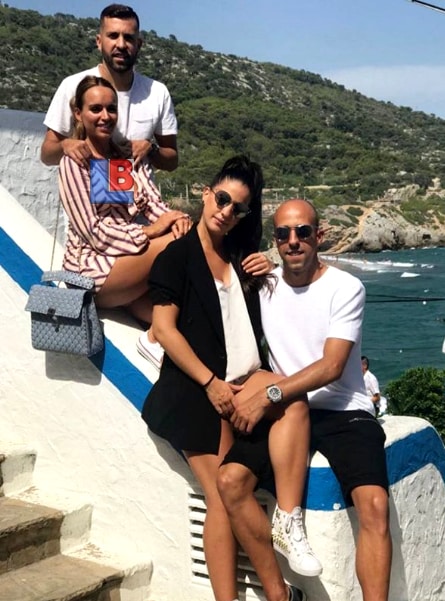 Jordi and Romarey had their first son Piero on the 18th of January 2018. 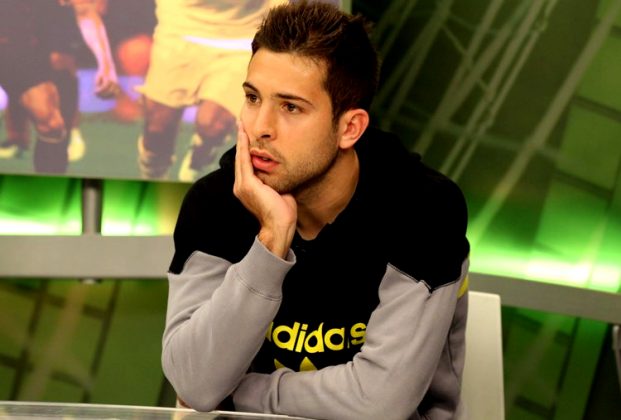 In the interview of Jordi Alba with Mundo Deportivo, the full-back also had to answer questions about his personal life. For example…Alba confessed he sleeps 12 hours a day!. Below are the following Q and A sessions.

Jordi Alba Responds: “Living there, I went to the cinema, shopping centres or bars. I also goes to the theatre “Joventut”, where my love’s mother acts”.

Jordi Alba Responds: “I love playing it and I keep doing it with my father. It makes me think and that’s why I think it’s great that chess is taught at schools”.

Q: Are you Salad mad?

I eat it for lunch and dinner…

Again, I can’t at breakfast but I am happy with salad, some chicken and some rice. I drink about  3 litres of water a day”.

Q: Are You a Fan of Music, maybe Kevin Roldan?

Jordi Alba Responds: “I like rumba and “flamenco”. Kevin Roldan? I don’t know who he is”

Q: Do you love Television?

Finally, on Jordi Alba Personal Life, he is said to be the brand ambassador of Braun and promotes the products. He owns several luxury cars including Audi. 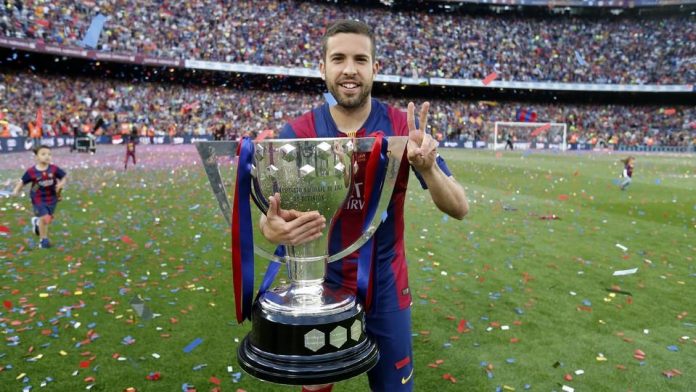 Alba has won several domestic and international titles. Before the 2017/2018 season, he has helped FC Barcelona achieve La Liga and Copa del Rey four times each.

He achieved the Supercopa de España twice and the FIFA Club World Cup in 2015.

More so with Barcelona, he achieved both the UEFA Champions League and UEFA Super Cup in 2015. Besides his club’ success, he received several individual awards till now. Some of the most notable awards among them are as follows: 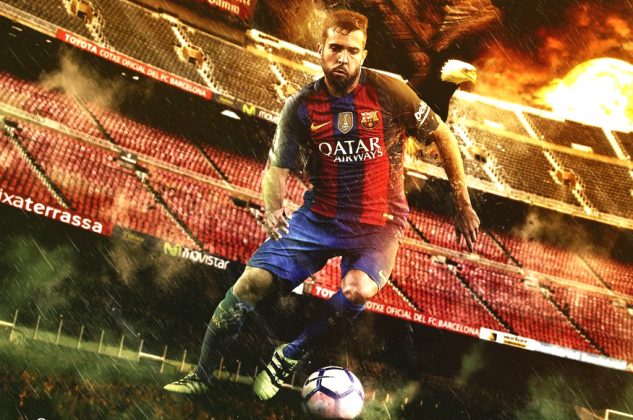 Alba is a technically very gifted and fast attacking left-back who can also be used as a left-winger.

His pace and stamina allow him to be very involved in both offence and defence as he can get from one end of the pitch to the other very quickly.

FACT CHECK: Thanks for reading our Jordi Alba Childhood Story plus untold biography facts. At LifeBogger, we strive for accuracy and fairness.