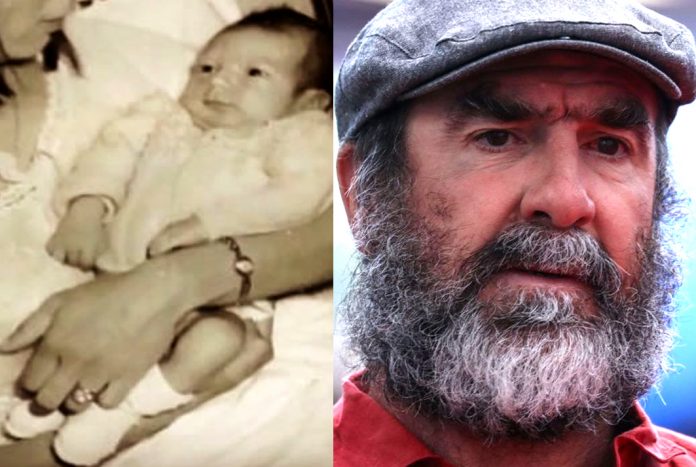 To give you a taste of the engaging nature of Eric Cantona’s Bio, here is a pictorial summary of his life.

Yes, everyone knows of his role in reviving Manchester United as a footballing force in the 1990s. However, only a few consider Eric Cantona’s Biography, which is quite interesting. Now, without further ado, let’s begin.

For starters of his Biography, Eric Daniel Pierre Cantona was born on the 24th day of May 1966 at Marseille in France. He was the second of three children born to his mother, Éléonore Raurich, and to his father, Albert Cantona.

The French national of white ethnicity with Italian, French as well as Spanish-Catalan roots was raised at Caillols area of Marseille, where he grew up alongside his brothers Jean Marie and Joel.

Growing up in his native land, Cantona’s family was relatively poor. Nonetheless, he had a happy childhood characterized by obsessive street football and aesthetic appreciation of the Mediterranean landscape surrounding their abode.

By the time Cantona was aged 15, he began playing organized football at local club SO Caillolais where he started as a goalkeeper but soon figured out that the dimensions of any goalpost inhibit exploits.

Thus, he wandered upfront, enjoying every bit of the process but stopped short of the opposition goal post as a centre-forward.

Having featured in over 100 matches for SO Caillolais, Cantona set sails for club Auxerre where he hoped to turn professional.

Cantona arrived at Auxerre as a 16-year-old who looked every bit of innocent.

The football prodigy spent two years working his way through the ranks until he eventually made his professional debut during a 4-0 league victory over Nancy.

Thereafter, Cantona’s career was put on hold in the year 1984 to enable him to undergo a compulsory national service after which he was loaned out to Martigues.

Although all began well for Cantona at Martigues, “end well” was a phrase that wasn’t yet coined for the next 7 years of his career.

It was at Martigues that Cantona made his first professional temperamental play appearance when he punched teammate Bruno Martini in the face. The next year (1988) he went all kungfu in tackling Nantes player, Michel Der Zakarian.

Series of fines and suspensions that were initiated to curb Cantona of his excesses failed to produce desirable results as he was enmeshed in more disciplinary cases at Marseille, Bordeaux, Montpellier, and Nimes where he announced his first retirement from football in 1991.

Acting on the advice of his close friend and biggest fan – Michel Platini, Cantona made a comeback to football at Sheffield Wednesday, where he had a short stint.

Thereafter, he spent a few months at Leeds United and helped the club win the Premier League title.

Cantona’s big break came not long after in 1993 when he helped Manchester United win her first league title in 26 years.

With the feat, Cantona became the first player to win the premier league title with different teams in successive seasons.

Fast forward to date Cantona ply his trade in the entertainment industry as an actor. His first acting gig came after a 1995 suspension from football, during which he played the role of a rugby player in the French comedy film “Le bonheur est dans le pré”.

He has acted in numerous films ever since, with the latest being “Ulysses & Mona”. The rest, as they say, is history.

Away from the complexities of his football career, Cantona had a scandal-free marriage with his first wife Isabelle, who bore him two children, Raphael and Josephine before they went separate ways in 2003.

Moving on, Cantona met actress Rachida Brakni while acting on the set the film L’Outremangeur.

They began dating not long after and went on to get married in 2007. Their marriage is blessed with a son, Emir.

Regarding Cantona’s family life, he is from a lower-class family background of 3 members. We provide factual information about immediate and extended members of his family.

Albert is Cantona’s dad. He worked as a psychiatric nurse during the football legend’s early life and went on to become an amateur painter.

Cantona credits Albert for instructing them to always observe the world, appreciate its beauty and learn from the tragedies that befall it.

Éléonore Raurich is Cantona’s mom. She helped raise Cantona and his brothers and was by far the biggest positive influence in Cantona’s life.

She gave him the confidence he needed to express himself and motivated him that he could be anything that he set his heart towards.

Cantona has just two siblings, an elder brother identified as Jean Marie as well as a younger brother named Joel.

Jean used to work as a sporting agent before he became involved in film projects while Joel had a less illustrious football career before he also delved into acting.

Cantona’s maternal grandparents were Pedro Raurich and Francesca Farnos while his paternal grandfather and grandmother were Joseph Cantona and Lucienne Thérèse Faglia, respectively.

Cantona has uncles and aunts who are yet to be identified, neither are his nieces, nephews, and cousins known at the time of writing.

Contrary to wide speculation, Cantona doesn’t have an attitude problem but a personality that many can’t handle. His persona exhibits traits of Gemini zodiac signs like quick-wittedness and sensitivity.

More so he is emotionally in tune, imaginative, and open to revealing details about his personal and private life.

His interests and hobbies include playing beach soccer, acting, writing, and spending time with family and friends.

Assets that testify of the legend’s massive wealth and give an inkling to his spending pattern include his £2m mansions in the trendy Fontenay-sous-Bois district of Paris.

Though not much is known about Cantona’s cars collection, it is believed that he has a penchant for classic rides that convey his sense of style.

Thanks for reading up to this stage. Here, we provide you are lesser-known facts that you never knew about Eric Cantona.

Cantona is yet to expressively make known his religious affiliation. Neither is he known to be an atheist. Nonetheless, he is religious at other super qualities like creativity, advocacy and giving back.

He is given to smoking on and off-screen as well as drinking responsibly. Close studies of his smoking patterns reveal that he sticks to tobacco cigarettes as against cannabis and other recreational inhalants.

The legend belongs to the old crop of football players who have no tattoos at the time of writing. Neither are the odds in favour of him getting body arts as he has long gone past his prime.

Do you know that the name Eric means “One” or “Ruler” while “Cantona” is a name of French origin that means “Thanks”. In addition, he was nicknamed “The King” for his footballing prowess in England.

Thanks for reading our Eric Cantona Childhood Story plus Untold Biography Facts. At LifeBogger, we strive for accuracy and fairness.