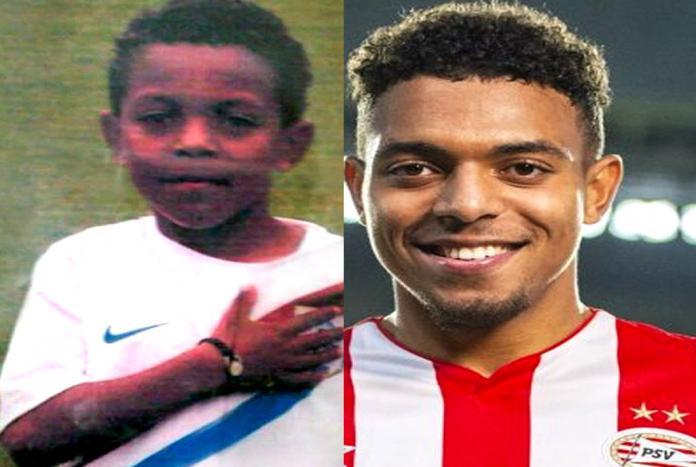 Our Biography of Donyell Malen tells you Facts about his Childhood Story, Early Life, Parents, Family, Girlfriend/wife-to-be, Lifestyle, Net Worth and Personal Life.

In a nutshell, we portray the history of a Dutch professional footballer of Wieringen origin. Our story begins from his early days, to when he became famous.

To give you a taste of the engaging nature of Donyell Malen’s Bio, here is a pictorial summary of his life.

Yes, everyone knows of his dribbling skills and prolific goal-scoring form. However, only a few consider Donyell Malen’s Biography, which is quite interesting. Now, without further ado, let’s begin.

For Biography starters, Donyell Malen was born on the 19th day of January 1999 at Wieringen in the Netherlands. He was born of the union between his mother, Mariska Manshanden and his father, Robert Malen.

The Dutch national of mixed ethnicity with Surinamese roots (similar to Tyrell Malacia) was raised at his birthplace in the village of Wieringen in North Holland, the Netherlands, where he grew up without biological brothers and sisters.

Growing up at Wieringen, young Malen was a dark boy who stood out in the white village owing to his premature-like ability to feature in competitive games for club VV Succes when he was only four years old.

By the time Malen was aged 5 in 2004, he began an earnest career buildup at HVV Hollandia where he spent no fewer than 3 years learning a new skillset.

While Malen was at it, he was tipped to become a key member of a top-flight football club academy and the Dutch National team.

As the years went by, Malen’s life practically revolved around football.

Thus, he was “too broke” to afford a rich social life outside the sport while his room at home further got him neck-deep in soccer as it was decorated by posters of his childhood hero and mentor Ronaldinho.

It wasn’t long before a 9-year-old Malen was admitted into the youth systems of Ajax where he spent the most time (about 8 years) of his youth career plying his trade as an excellent attacker.

While the management of Ajax’s talented B-juniors was yet to make known its plans to Donyell, Arsenal came scooping up the football prodigy with juicy offers that included a contract proposal.

Arsenal did make good on their agreements with Donyell including getting him featured in most games of the Youth Premier League which further saw to his debut for the club’s senior team during The Gunners 2–0 win over Sydney FC in July 2017.

Barely a month later, Arsenal was quick to sell Malen to PSV Eindhoven as the English side believed that the then 20-year-old had failed to make enough progress during his 13 months spell.

News of the controversial “let-go” was greeted with an outcry from fans who described it as ‘Worse than losing Alexis Sanchez’.

Moving on with his career at PSV II, Malen made progress in leaps and bounds that saw him named the best talent of the 2017–18 Jupiler League.

He went on to make his debut for PSV in a 4–0 Eredivisie victory over PEC in February 2018. Donyell, alongside Cody Gakpo, won the 2018 Eredivisie title with PSV that year.

Fast forward to the time of writing, Malen is one of the most prolific goal-scoring talents in the dutch league who is sought after by top-flight teams, including Liverpool FC and ex-club Arsenal F.C. The rest, as they say, is history.

About Delisha – Donyell Malen’s Girlfriend and Wife to be:

There are just a few names that make Malen smile when mentioned, especially that of his girlfriend – Delisha. What do we know about the potential better half at the time of writing?

To start with, she is a natural brunette who loves travelling and eating good food. In addition, she earnestly loves to keep her private life away from the prying eyes of the press.

Although not much is known about when the lovebirds met and began dating, they are widely considered as perfect couples who desire to walk down the aisle before welcoming son(s) and daughter(s) to share in their love.

Family is where life really began for Malen and where love never ends for him. We bring you facts about his family life.

Robert Malen is the father of Donyell Malen. He played football for the Surinamese youth team during Malen’s early life.

Robert got separated from Malen’s mom much later but nonetheless shares a close bond with his celebrity son who regards him as a father figure.

Mariska Manshanden is the mother of Donyell Malen. She played an important role in the life and rise of her son by driving him to train no fewer than 3 times every week.

In addition, she moved to London to keep him company and of course, made it a point of duty to cheer Malen from the stands alongside his biological dad Robert.

Malen was the only son born of the union between his mom and dad. As a result, he has no biological brothers and sisters but little-known half-siblings born to his father from another relationship.

Away from Malen’s immediate family life, he has a grandfather and grandmother identified as Joop and Marian respectively, while there are no existing records of his uncles, aunts, cousins, nieces and nephews at the time of writing.

Speak of Donyell Malen’s personality, he has an amazing persona that reflects the cool and awesome traits of individuals guided by Capricorn Zodiac sign. He is confident, organized, intelligent and religiously hardworking.

The playmaker rarely reveals details about his personal and private life. He has a few interests and hobbies. They include swimming, fishing and spending time with friends and family.

Do you know that Donyell Malen’s net worth is still under review at the time of writing?

Notwithstanding, he has a market value of €18 million as of 2019. With a lucrative annual salary that seems to keep rising over the years.

As a result, the attacking talent lives a luxurious lifestyle at his Eindhoven home, where he lives with his girlfriend.

In addition, he rides in a nice car and plans to own his own house in the nearest future.

To end our Donyell Malen childhood story and biography, here are lesser facts about him.

Malen has no body arts at the time of writing, neither do fans have tattoos of him yet. He is rather focused on improving his physique. Also, his stamina and possibly height for more aerial duels.

The playmaker is apparently not big on religion and has not yet given clear pointers to his beliefs. Thus, it cannot be authoritatively stated whether he is a Christian, Muslim or atheist.

We strive for accuracy and fairness in our quest to deliver Dutch Football Stories. Surely, the Life History of Noa Lang and Jeremie Frimpong will excite you.