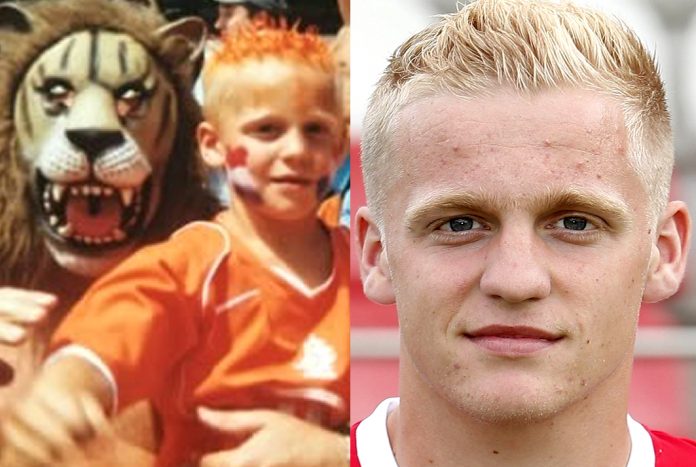 LifeBogger presents the Full Story of a Dutch Football genius best known by the nickname “Mardonny”.

Our Donny van de Beek Childhood Story plus Untold Biography Facts bring you a full account of notable events from his childhood time to the moment he became famous.

Yes, everyone knows of his brilliant passes and ball retention capabilities. However, not many soccer fans have read a concise version of Donny van de Beek’s Biography, which is quite interesting. Now, without further ado, let’s begin.

For Biography starters, Donny van de Beek was born on the 18th day of April 1997 at Nijkerkerveen in the Netherlands.

Donny was the first of two children born to his mother, Gerdina van de Beek and to his father, Andre van de Beek.

The Dutch national of white ethnicity comes from a middle-class family background and was raised by both parents at Nijkerkerveen in the Netherlands, where he grew up alongside his younger brother, Rody van de Beek.

Growing up in a farmhouse at Nijkerkerveen, young Donny was initially not concerned about football during his early life. The then youngster preferred climbing trees and spending time with animals.

Similarly, Donny (just like Kepa) developed an interest in tending to birds of his family’s aviary, a development which once saw him daringly climb up to the roof of the farmhouse through a pole and mesh.

Donny was less than five years old when he began studying at an unnamed school in Nijkerkerveen. While at the school the youngster was described as a normal kid who was calm and not shy like his mates.

By the time Donny was aged four, his father Andre took him to watch a football game at Ajax’s stadium. Donny instantly developed an interest in the sport and was thereafter enrolled in the local club Veensche Boys.

Donny Van De Beek was very young when his father first took him to watch a football match. Credit: Instagram.

Recalling Donny’s first day at training with Veensche Boys, his father Andre revealed that: “Donny fared excellently well during the training and made playing the sport his top priority from that day”.

It was at Veensche Boys that young and ambitious Donny spent a few years honing his skills in football as well as learning how to make brilliant passes that are characteristics of his present style of play.

It wasn’t long before the determined youngster’s performances courted the attention of top-flight clubs, including Ajax, which admitted the then eleven-year-old to their esteemed academy in the year 2008.

While at the youth systems of Ajax, Donny gradually rose through the ranks and established himself as one of the club’s most promising players, a development which earned him a promotion to Ajax’s first team in 2014.

Although Donny made only six appearances for Ajax in his first season, he kept improving and began to record regular appearances from the year 2016 and under the Erik ten Hag era. The rest, as they say, is history.

Donny is yet to be married at the time of writing. We bring you facts about his dating history and current relationship life.

To begin with, Donny is not known to have been in any relationship before he met his longtime friend, Marijn van Eijkelenburg.

The lovebirds who are from the same hometown became romantically attached during their late teens and have remained a pair ever since.

Meanwhile, Donny has no son(s) or daughter(s), a development that might change if he takes his relationship with Marijn to the next level.

van de Beek was born into a family of four members we bring you facts about his family life.

Andre van de Beek is Donny’s dad. Although Andre was never a career football player, he once served as the leader of Veensche Boys, and he is credited for introducing his son Donny to football when he was aged 4.

The supportive father of two is in a good relationship with Donny and serves as his unofficial personal coach.

Gerdina van de Beek is Donny’s mom. She shares a good relationship with Dony and takes delight in sharing details of the football genius’ childhood story with the world.

Unlike most mothers of football players, Gerdina is passionate about the sport and helped raised Donny to become the player that he is today.

Dony has no sisters but a younger brother called Rody. like Donny, the sibling began training at Veensche Boys but did not end up as a popular and sensational player like Donny.

Nonetheless, Rody is one of Donny’s biggest fans and shares a close mutual bond with him.

Away from Dony’s immediate family, little is known about his paternal grandfather and grandmother, as well as his maternal grandparents.

Similarly, he is yet to reveal anything about his uncles and aunts, a development which goes across the board for his cousins, nieces and nephews.

What makes Dony Van de Beek tick? Sit back as we bring you the makings of his personality to help you get a complete picture of him.

To begin with, Dony’s persona is a blend of Aries Zodiac traits. He is modest, energetic and knows exactly what he wants.

Considered to be a near conservative, Donny moderately reveals details about his personal and private life, including hobbies like sitting in the jacuzzi, hanging out with friends and playing darts. He also has interests in fashion, canoeing and boxing.

Although Donny Van De Beek’s net worth is still under review, he has a market value of 22.50 million Pounds as at the time of writing.

The midfielder, whose origin of wealth outside football is unknown, lives a middle-class lifestyle and has seemingly devised a ratio that prevents him from spending above his earnings or salary.

The true value of his house at  Nijkerkerveen is yet to be fully ascertained, while not much is known about his car collection.

Notwithstanding, there’s no denying the fact he can afford to fly in jets and regularly embarks on shopping sprees.

To wrap up our Donny van de Beek childhood biography, here are some untold or lesser-known facts that are rarely included in his bio. 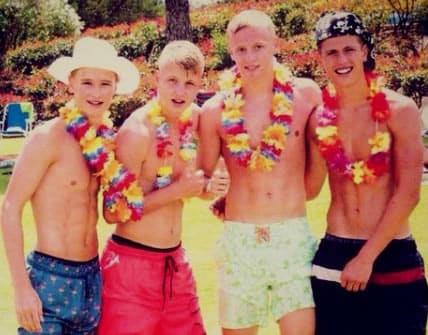 Thanks for reading our Donny van de Beek Childhood Story plus Untold Biography Facts. At LifeBogger, we strive for accuracy and fairness in our quest to deliver Dutch Soccer Stories. Surely, the life history of Noa Lang will excite you.