LifeBogger presents a Full Life Story of a Football Genius best known by the Nickname; ‘Ox’.

Our version of Alex Oxlade Chamberlain’s Biography Facts, including his Childhood Story, brings to you a full account of the notable events of his boyhood days. We then proceed to tell you how Ox became famous.

The analysis of the Ex-Gunner and English professional footballer involves his life story before fame, family life and many little-known facts about him.

Yes, everyone knows about his play making abilities. However, only a few fans consider Alex Oxlade Chamberlain’s biography, which involves learning more about his parents, brother, and lifestyle, etc.

The footballer’s life outside the pitch is quite interesting. Now, without further ado, let’s begin. For Biography starters, he bears the name Alexander Mark David “Alex” Oxlade-Chamberlain. Chamberlain was born on the 15th day of August 1993 in Portsmouth, the United Kingdom by Mark Chamberlain (father) and Wendy Oxlade (Mother).

Note: The name Oxlade is the surname of his mum, while Chamberlain is that of his dad. Alex was born a mixed-race. His mum is white while his dad is black.

His dad’s family (just like that of Jacob Ramsey) is of Jamaican background. It was Alex’s grandparents who emigrated to England from Jamaica to seek a better living.

Alex spends his childhood life participating in different sports. Thou he started kicking a football at age 2. He was deemed very intelligent by his teachers in school.

A child who excelled in sports outside of football. Ideally, Oxlade-Chamberlain attended St John’s College, Portsmouth.

The Sun revealed that Oxlade-Chamberlain nearly chose rugby union over football when he was offered a trial at London Irish. However, he played rugby as a scrum half or full back.

According to the former Arsenal star, “My senior school didn’t play football. It was a rugby and cricket school and as I was on a sports scholarship, I was forced to play rugby.

I played scrum-half or full-back and I was all right at it. I got a trial for London Irish but couldn’t do it because Southampton wouldn’t let me.”

Oxlade-Chamberlain was also an avid cricketer with him playing as a wicketkeeper, bowler and opening batsman with southeast Hampshire.

He was offered trials as a wicketkeeper-batsman with Hampshire but declined because it conflicted with his love for other sports.

Alex was also one of his school’s favourites in athletics as a little child. He was his school’s best underage sprinter. His pace was the obvious reason why he participated in many sports at the grassroots level. He decided to finally follow in his father’s footsteps by choosing football as a sport he would perform on a more regular basis. 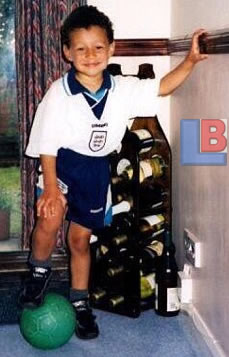 As a schoolboy footballer, Alex Oxlade-Chamberlain thought a lack of inches would wreck his dream of becoming a famous player like his dad.

According to DailyMail Sports, the former Arsenal teenager would be taken by his father, Mark Chamberlain, to a park near Portsmouth’s Port Solent marina for football training. He gained the nickname ‘The Ox’ from his elementary school because of his powerful playing style which earned him his first trophy and player of the competition award as a child.

His father, Mark Chamberlain, was a former England winger. He was regarded as one of the fastest English player during the 1970s and 1980s. As his son Alex puts it,

‘Until I was nine or 10, I genuinely thought I was quicker than my dad,’ says Oxlade-Chamberlain.

‘Then one day when we raced he battered me and I didn’t know what had happened. I started telling him he was cheating. Obviously, he thought at that age I could take losing.’

His dad, Mark Chamberlain tells the anecdote somewhat differently. ‘It got to the point when he was 11 or so — I can’t remember exactly how old — and he was talking to some people who had seen me play.

They told him, “Your Dad’s quick”, and he said: “Quick! He’s not quick. I always beat him!” That’s when I told him, “But I let you wont” This was when we had the challenge.

This however doesn’t change the fact that both are still best friends till date.

Alex Oxlade-Chamberlain is under no illusions as to how different his life so far has been to his father Mark’s career as a professional footballer in the 1970s and 1980s. His dad won major trophies during his time.

He was famous for his play making skills in England’s 1984 victory in the Maracana. The former Arsenal winger credits his father with having given him the extra push to become a professional footballer

Wendy Oxlade (pictured below) is Alex’s mother. Many of his fans who had never seen her pic would believe Alex had a dark mother. Wendy is British Born and hails from Portsmouth, England.

Wendy Oxlade is a humble and quiet mother who is hardly seen in the public eyes. She had additional hopes asides from football for her little star when he was good at all activities.

According to Alex via ExpressSports,.. “My mum always tried to push me to do drama at school and I never really understood why until now, to be honest.

I never wanted to be somebody on the stage, but I was always quite good at it so my teachers kept forcing me into the situation.

Because of that, I continued doing drama until I was about 14 but I had never got heavily involved in any of the big plays and was multitasking to get my youth football going.

I deceased from drama finally after I was almost released by Southampton, my youth club”

Thou, little is known about him. Christian Oxlade-Chamberlain is his younger brother. He was born in the year 1998 in Portsmouth, United Kingdom.

Christian is a midfielder who joined Portsmouth FC in 2015. Both brothers don’t look alike.

Christian, thou young is still yet to be in the limelight, unlike his elder brother.

Neville Chamberlain, born 22 January 1960, is an uncle to Alex. He is the elder (2 years older) brother to his Chamberlain’s dad (Mark).

Their father (Alex Chamberlain’s grandfather) after migrating from Jamaica, got married to a white woman. Neville has a gene of his mum.

After retiring as a player he worked as an agent for his brother Mark. Neville Chamberlain has also worked as assistant manager at Alsager Town and manager of Hanley Town.

Previously, there was no availability of any of his relationship history. However, there has been keen speculation and gossip about who his girlfriend is.

Several names of girls came forth in a suspicion that she might be his girl as MarriedWiki reported. This has however changed recently in the one time secret love story of Alex Oxlade Chamberlain.

It was confirmed in February 2017 that Oxlade-Chamberlain had made public, his relationship with singer Perrie Edwards of the girl group Little Mix. The pair have been spotted laughing and joking as they enjoyed a spot of lunch in Mayfair, before he put his number in her phone and they parted ways. Perrie and Alex’s relationship has gone from strength to strength since they went public with an Instagram post in February 2017. They are both used to five-star catering and healthy eating.

Both pairs would be announcing their marriage soon according to reports. They would never stop chilling. Seemingly no Premier League squad is truly complete unless there’s at least one player who drives a Range Rover.

In the current Liverpool team, the young English attacking midfielder Alex Oxlade-Chamberlain is a player who has been seen regularly turning up to training in one of the British-brand SUVs. As Alex puts it…“IF you are looking for a mentor, someone to advise you in the art of footballing; who better to turn to than Thierry Henry?” That seems to be the view of Alex Oxlade-Chamberlain.

Quoted on TeamTalk, Oxlade-Chamberlain also said: “I might have to have a few words with Thierry before i proceed to Liverpool. I still think there’s no better man to advise me on how to be the best even after living in a club that regards him as a true legend”

He had been offered a new £180,000-a-week deal to extend his stay at the Emirates but opted instead to join Jurgen Klopp’s Liverpool.

Reports suggest Oxlade-Chamberlain has agreed a £120,000-a-week deal with the Reds after undergoing a medical at St George’s Park on the 30th of August, 2017.

At some point, things didn’t go well for him, On two occasions, he came close to being released by Southampton’s academy. He later revived his form.

At 16 years and 111 days old, Oxlade-Chamberlain became Southampton’s second-youngest ever player when he came off the bench in a 5-0 League One win over Huddersfield Town in March 2010. Alex went on to become the second-youngest footballer ever to make Premier League appearance for ‘The Saints’ (after Theo Walcott).

He was a popular figure who wore the number 10 jersey number for the Saints. In August 2011, it became known that Oxlade-Chamberlain signed for Arsenal. There were rumours that ‘The Gunners’ paid about £12 million.

Alex Oxlade-Chamberlain became the youngest Englishman to ever make a Champions League goal.

He practically did not take part in the first part of the season matches, as Walcott and Arshavin performed for the team.

However, after Gervinho went to the Africa Cup of Nations, the footballer got an opportunity to come on the pitch more often. The rest, as they say, is history.