LifeBogger presents the Full Story of a Football Genius best known by the Nickname; “Tiger”.

Our version of Theo Walcott’s Biography Facts, including his Childhood Story, brings you a full account of notable events from his boyhood days. We then proceed to tell you how Mr Handsome became successful in football.

The analysis of the Ex-Arsenal Legend involves his life story before fame, family life, and many OFF and ON-Pitch little-known facts about him.

Yes, everyone knows about his blazing speed and impact with Arsenal. However, not many fans have read Theo Walcott’s Biography, which is quite interesting. Now, without further ado, let’s begin.

For Biography starters, Theo James Walcott was born on the 16th day of March 1989 in Stanmore, United Kingdom.

Interesting to know, Theo was born to a white English mother, Lynne Walcott, and a black British Jamaican father, Donald Walcott. His baby looks came from both parents.

Theo grew up in Compton, Berkshire. He attended Compton Church of England Primary School and The Downs School.

The youngster started out in athletics. Theo was known back then as was Pacey, a skilful and determined child.

He said in a recent interview;…“I’d have gone into athletics. You’ve got to utilise the things you are good at and as I’m fast I once channelled all my energies into sprinting.”

Everyone admired Theo’s handsomeness as a child. His parents were proud to have a handsome boy as a child. Asides from athletics, Theo was also good in art and craft, as pictured below.

His career path was well thought of by his parents and loved ones. In a bid to continually showcase his pace, they all saw football as the best option for young Theo.

Theo started playing football for the local village team instead of a youth club. His parents saw him as a fragile child and wanted to experiment his pace in the game first from a local level.

Theo once recalled; As a little kid, I wasn’t even interested in football. My parents and loved ones made me go into it because of my pace.

The first time I played I was nine and I volunteered to go in goal thinking it would be exciting to save penalties.

I later realize I cant use my speed as a goal keeper. My pace was well utilized as soon as i converted to a forward”

Because of his performance, Newbury youth football club acquired him. Thanks to his pace, Young Theo once scored more than 100 goals in his one and only season for Newbury.

This was when the whole of Britain started recognizing him. Theo was the smallest in his team at that time.

While playing for the club, young Theo attended The Downs School, Compton. This is a Comprehensive school in Newbury, England.

Theo once recalled a moment in school…”When I was 10 years old, my teacher got us to imagine our future. That made me draw a timeline for the rest of my life.

I had just started playing football at Newbury, so I drew pictures of me as a professional footballer. I imagined I’d drive a nice car, have a nice house, and win the World Cup with England.

I’d also imagined I will have two wives – one would die and so I would get remarried (I haven’t told my girlfriend Mel about that as I keep it a secret.) – and then I’d die aged 90. It was all very far-fetched, but the footballer part has come true.

Theo grew up to be a fine footballer for Newbury. His pacy performance led to a move to Swindon Town, where he played as their number 9 against bigger and tougher opponents. 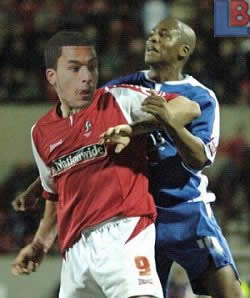 He spent only six months there before leaving for Southampton after he rejected a chance to join Chelsea FC, who at that time have started pumping monies into players.

The likes of Arjen Robben, Didier Drogba and Frank Lampard were already present.

In the 2004–05 season, Walcott starred in the Southampton youth team that reached the final of the FA Youth Cup against Ipswich Town.

In addition, he became the youngest person to play in the Southampton reserve team, at 15 years and 175 days. Walcott transferred to Arsenal on 20 January 2006, for a fee of £5 million. The rest, as they say, is now history.

Theo Walcott’s parents come from a middle-class family background with roots in Jamaica. Raheem Sterling as well as Jacob Ramsey, etc, are also from a similar root. Now let’s tell you about members of his household.

His dad, Donald, got married to Lynne a few months after arriving in Britain. Getting married to a British citizen gave him a permanent stay in the country. Recently, Donald and Lynne separated for unknown reasons. After their separation, Walcott’s dad began dating Gail. He got married to her after a short relationship stint.

Walcott said on his father’s wedding day…‘What an amazing day!!! Congrats to my Dad & Gail on becoming #Husband & #Wife.’ You could see Theo’s resemblance to his dad in the picture below.

Lynne Walcott has always seen her son as the apple of her eyes from his youth. Both mother and family breadwinner son share a strong bond.

Theo Walcott’s mother, Lynne Walcott out of love for his son, picked up a career as a female youth football coach. Below is a picture of her and her crew.

First, she is older than him. Theo Walcott’s sister Hollie, is a bodybuilder who came second in the British Natural Bodybuilding Federation Central Championships in July 2010.

First thing first, he is as handsome as his younger brother. Growing up, Ashley Walcott was never interested in football. He leveraged on furthering his education. Ashley and his dad once took the decision not to travel to Ukraine to watch Walcott play in the country due to possible racist attack confrontations. In his words, “Somethings aren’t worth risking”

Both Theo, Donald, and Ashley are very close pals. Theo is darker compared to his brother Ashley, who is the softest of all.

If a young boy loves a lady’s soul instead of her body, he ends up loving only one woman. This is the Theo Walcott’s Love Story.

Theo has been in a long-term relationship with his childhood sweetheart, Melanie Slade, who is a physiotherapist by profession.

She is very lovely and sweet just like her then-boyfriend (now husband) who is very handsome.

Their relationship began in 2004 after their meeting at the WestQuay shopping centre in Southampton.

On June, 2013 the couple married at the Castello di Vincigliata, an Italian castle at Tuscany, Italy.

Theo’s marriage was blessed immediately with its fruit. Their first son Finley James Walcott was born on 10 April, 2014. The photo below shows Theo, Mel and Finely. Mel was already pregnant with her second child. Theo Walcott once labelled himself ‘the happiest person in the world’ after sealing a ‘perfect weekend’ by scoring hours after staying up all night for the birth of his second child.

Walcott netted Arsenal’s crucial second against Bournemouth, settling Arsene Wenger’s ‘nervous’ side despite a lack of sleep following 12 hours of labour with wife Melanie Slade which started in the early hours of that day.

The forward celebrated with a rocking gesture, dedicated his goal to his new boy Arlo who was born on the 26th of November 2016. When Melanie Walcott, wife of Arsenal and England footballer Theo, gave birth to their son Finley in April 2014, doctors confirmed he had a congenital heart defect. Surgery had to be done on 10 weeks old Finley. In Melanie Walcott’s words,

“Theo and I had no idea anything was wrong when I was pregnant with Finley. He arrived two weeks early and I had a natural birth, but then suddenly doctors said he had a heart murmur, which we were told was quite common.

After 24 hours it’s supposed to heal, but it was still there. Doctors said they wouldn’t know what it was until they did an ECG and ultrasound of the heart.

Luckily, we could stay with him as I didn’t want to him to be out of my sight, and we ended up in Watford Hospital for five days as they wanted to establish what was going on before they let us go home.

They kept on doing tests to make sure his ­condition wasn’t changing, but fortunately, nothing critical was happening. The doctors diagnosed that Finley had pulmonary valve stenosis, a congenital heart defect.

Theo and I were terrified, although my physio background helped – I know how the heart works. He looked well too, so looking at him you wouldn’t have known – that made us feel positive. He was in good hands.

We went home and were referred to a specialist at the Royal Brompton Hospital in London. We saw the consultant quickly. When he went into surgery, it was the hardest two-and-a-half hours.

Finley came round after the surgery relatively quickly and we saw him ­immediately. He was a very upset baby because he didn’t know what was going on.

He stayed in overnight with all the catheters in and we took him home the next day. Finley’s fine now, and although he’ll have regular checkups until he’s 16, hopefully that’s that.” Burglars once raided Theo Walcott’s mansion as he played Champions League match with FC Barcelona. This happened on the 8th of March, 2011. They stole properties that is worth over £40,000.

After breaking into the £2 million house through a conservatory window, the crooks helped themselves to property including a VW Gold car which was parked on the driveway.

He said the damage to the house that night had caused ‘huge upset’ to the family who felt their home had been violated.

Both burglars, Ryan Lee and Kevin, would have been jailed for three years and nine months.

Theo Walcott’s parents and brother, who also live at the home, were at the club’s Emirates Stadium cheering him, when the raid took place.

Most Handsome Footballer in the World:

Theo is the only footballer whose pretty face can charm any lady into liking and falling for him. Without being biased, Theo Walcott is regarded by many football pundits as the most handsome footballer in the world.

His charming looks makes many girls fall for him without taking a second glance. All thanks to his pretty face and his well-tattooed body.

His family made a cameo appearance in the 2007 film Harry Potter and the Order of the Phoenix, directed by David Yates, the partner of Walcott’s aunt. Walcott himself was due to appear as well, but his commitments to Arsenal forced him to drop out. In August 2011, Walcott’s auto-biography Theo: Growing Up Fast was published by Bantam Press. The book caused controversy because of his criticism of England manager Fabio Capello, whom he describes as “cold and clinical”. For Berkshire School, they ranked me in the top two for my age, but it was always going to be football for me.”

Weaknesses
In his words…“My left foot. It’s so beneficial at this level to be able to use either foot, so it’s something I’m working on. I could also do a lot better with my heading.”