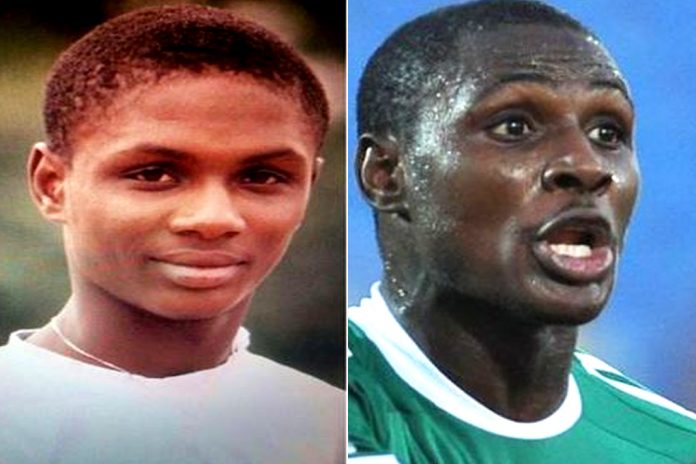 In a nutshell, we give you the history of the Nigerian footballer who has made a name for himself in the game. Our Bio begins from his early days to when Odion Ighalo became famous.

Yes, everyone knows about his Premier League history with Watford, but few consider our Odion Ighalo’s Biography, which is quite interesting. Now, without further ado, let’s Begin.

For Biography starters, his full names are Odion Jude Ighalo. He was born on the 16th day of June 1989 in the ghetto area of Ajegunle, a rough neighbourhood of Nigeria’s Lagos state notorious for producing many musicians and ghetto kings.

Odion was born to his mother, Martina Ighalo (a former petty trader) and Father, Paul Ighalo.

Ighalo started from the slum and grew up in a poor family setting. In his words…

“Back then in Ajegunle,  it was difficult to live, difficult to eat and that is why I thank God. My parents didn’t always have what we wanted or needed, we had to struggle,”

he told The Guardian.

While his father was mostly unemployed, his mother owned a petty shop where she sells drinks and provisions.

Madam Ighalo used to carry her wares and rushed to hawk ‘pure water’ so that her son, Odion Ighalo can play football.

She’ll save some money to buy football boots for her son while his dad goes opposite to pays his transport money to go to school. There was indeed a clash.

As is the case with many young lads growing up in Nigeria, Ighalo’s parents disagreed about their son’s desire to become a footballer.

While his mum supported his quest while his dad wanted him to go to school and study because it was safer than being in the open field. Pa Paul Ighalo’s case was well built.

As a boy, Odion Ighalo and his football teammates would hit the deck when they heard gunfire during training.

The bullets didn’t know the difference between the young footballers and the drug dealers selling their narcotics on a corner of the pitch, who the police were targeting.

As DailyMail reported, growing up in the Ajegunle ghetto, at the heart of Nigerian city Lagos, life can be like that. This was why his dad rejected him for becoming a footballer.

As Ighalo puts it, …“My mum stood beside me and protected him from my dad who would spank him for leaving school to play football”

Odion grew up as a young footballer watching the likes of Kanu Nwankwo, Samson Siasia, Jay Jay Okocha, Samuel Eto’o, Andy Cole etc. They were his role models who inspired him to be a striker.

Back then, Odion Ighalo can use to travel locally to play football within his Ajegunle’s neighbourhood where he trains with other football players.

In a bid to get out of poverty, Odion had to stop schooling to take football professionally.

He ignored the consequences of his dad.

Despite the poverty surrounding his circumstances, the onetime young and aspiring player was very determined to make it in his chosen career. He played sometimes on an empty stomach.

When Ighalo started on the streets of Lagos, he never anticipated playing in the English Premier League.

He was determined to play football and make some money to fend for his family and take care of his caring mother.

The talented amateur baller played on the same local pitch called “Maracana” in the Tolu community area of Ajegunle.

It was the pitch where the likes of Emmanuel Amunike and Kanu Nwankwo played as amateurs.

He started playing professionally with Prime FC and later moved to Julius Berger pictured below.

His miracle finally came. Odion was discovered by Argentine FIFA agent Marcelo Houseman (pictured below) who recommended him and took him on trial to Norway.

In Norway, he passed his trials and first played as a professional in Lyn Oslo where he scored nine goals in 20 games before moving on to Udinese – Italy.

It didn’t take long before Granada came calling, where he became a Legend for the club, helping them to get progress to the Spanish La Liga in 2011.

The Spanish club named part of its stadium after him. This legendary feat attracted the English League club, Watford. The rest, as they say, is now history.

Outside the pitch, Ighalo is a loving father of three kids and attributes his successful career to his beautiful wife and childhood sweetheart, Sonia Ighalo, pictured below.

Sonia supports her husband both emotionally and spiritually.

“Anytime, before he goes out to play a game, I always pray for him and wish him the very best. It’s been God, He has been so faithful to us and we give Him all the thanks.

There’s nothing much that I really do behind but I do encourage him as my husband anytime he’s out there playing,” Sonia Ighalo told Nigeria’s Punch Newspaper.

Odion recently started bringing his family out on social media, which made many people think he wasn’t single as against old belief.

Below is a photo of Odion Ighalo with his pretty wife, mother and kids on a boat cruising in China.

Ighalo loves his mum so much that he never fails to carry her along with him on his family expedition. Surely, his wife Sonia bonds with her mother-in-law. 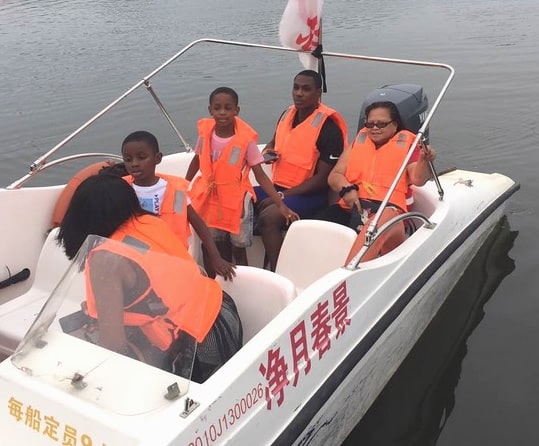 Ighalo and his only daughter share an enviable bond, that no one in his family, even his mother, can match up to.

Both father and daughter are practically inseparable, and their love only grows stronger with time. Below is a photo of both. 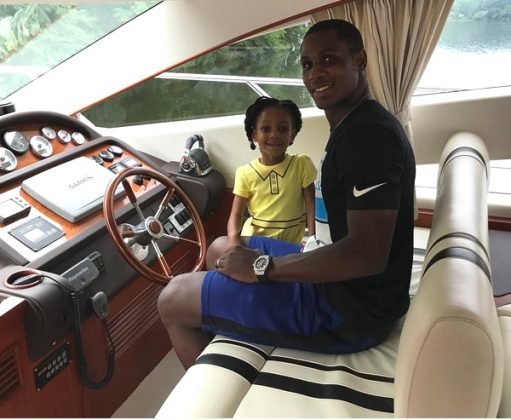 Ighalo is indeed, a proud family man who has taken his personal life away from football said, “Of course, I’m married with kids, and I don’t talk about my family and relationship, it is personal,” he told Nigeria’s Naij.

He continued…“My wife has been very crucial to my impressive career. She has been able to build a good home, and she makes me and the children happy. She is everything to me, I want to say that my marriage has recently has made me be a complete man,”

Without a doubt, Odion has shown he is much of a family man, as he doesn’t shy away from sharing wonderful moments with his lovely children. 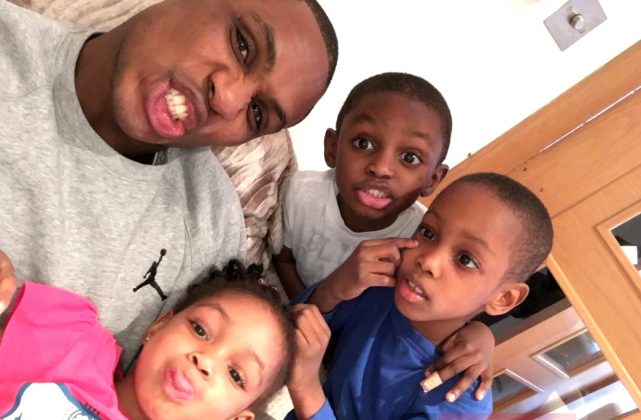 Very little has been said about his dad since the beginning of this write-up. Ighalo might not have been really close to him because of he might have never bonded well with him as a kid. More so, owing to the fact that he was against him being a footballer.

Below is a picture of the Late Pa Paul before his death. Just looking at the picture suggests he had his son while he was probably in his 50s.

“My father was in his late 90’s and never complained of being sick. Unfortunately, in the early hours of a fateful morning, we were told that he had taken ill.

A nurse from the Faithland Hospital came around to attend to him before he gave up the ghost. We were all shocked because nothing was wrong with him.

On Monday morning when people knew he was late, our house was a sort of Mecca until his corpse was moved to Edo State that same day for burial.”

The death of Papa Paul Ighalo left Odion Ighalo dumbfounded considering the fact that he had a father-son conversation with him only two days before his death which papa prayed for him to score goals as he was experiencing Goal drought.

Madam Ighalo is alive and surely reaping the fruits of her labour. She is now settled with a comfortable life and shelter, a just reward for her devotion, commitment and sacrifice to her son.

The Ighalos now live in Lagos’s city centre for the good life, concluding a wonderful story of moving from grass to grace.

Ighalo is a fun persona and that is very obvious in his social media posts. But little do people know Ighalo is a boxing fan as evidenced by his attendance at Anthony Joshua’s World Heavyweight bout against American Charles Martin. 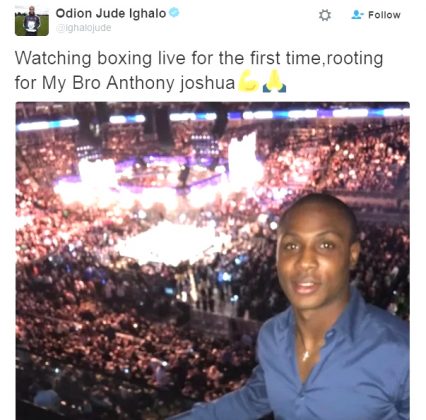 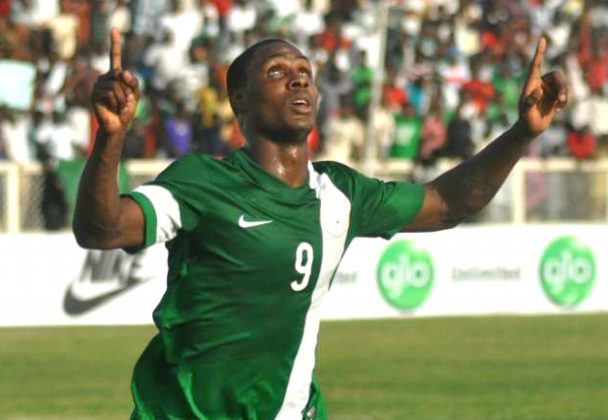 Punishment for the ‘Thank You Jesus’ inscription:

Referee Ghead Grisha once gave Ighalo a yellow card. It came after the forward lifted his shirt to reveal a ” Thank You Jesus” inscription. Shortly after giving Nigeria a goal. 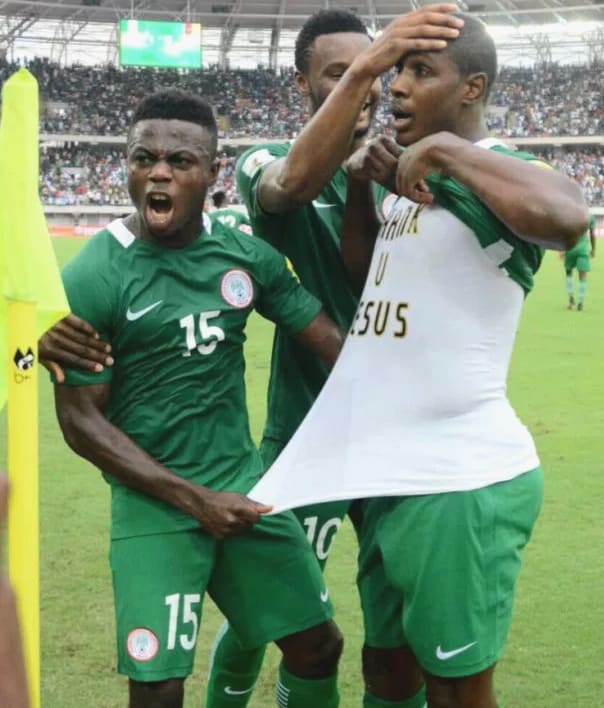 As if the yellow card wasn’t enough, FIFA also threatened to give him additional sanction.

According to their rules, Football players are banned from the display of political, unapproved commercials, and religious or personal ‎messages in undershirts.

He gives back to the society immensely. “I’m planning to open an orphanage in Lagos” Ighalo once said.

“I don’t do these things because I want people to praise me. I’ve been doing them before I joined Watford. Ever since God started blessing me, I have been helping the kids, helping the widows.”

This is according to Pastor Benjamin Igoh, founder of Nigeria’s Wazobia Widows Foundation. He said that Ighalo has gotten an undying passion for the less privileged. Particularly in Ajegunle.

This is where the striker began his career before leaving for Europe, is the reason behind his form.

Ighalo is known to be a devout Christian. He is the kind of believer who often dedicates part of his wages to Nigerian charitable organisations to help impoverished children. Also, helping schools and widows below the poverty line.

“My family are No.1 – every month I send money back home to them, but I also send donations to the less privileged because I come from poverty,” the striker told Mirror in 2015.

Without a doubt, there are benefits of playing in numerous leagues across Europe. One of such is the opportunity to learn different languages and culture. This is the case of Odion Ighalo.

At 27, Ighalo has managed to play in four top leagues in Europe. This, by implication, means he is able to converse in three other languages apart from English.

Did You Know??.. Ighalo once acted as an interpreter for Spanish and Italian players at the Hornets.

Thanks for reading LifeBogger’s version of Odion Ighalo Biography.

We strive for accuracy and fairness in our quest to deliver you Nigerian Football Stories. Kindly stay tuned for more. The Life History of Victor Osimhen and Victor Moses will excite you.

I love ighalo because of his assistant to poor people.

I love ighalo for his obedient to his parents & most importantly for saying that he send money apart to his family,to those who are below poverty line because he come from poverty.i praise him for this statement & I commend him to build orphanage God will uplift him among all footballers.finally may u always remain contented for the rest of ur life.