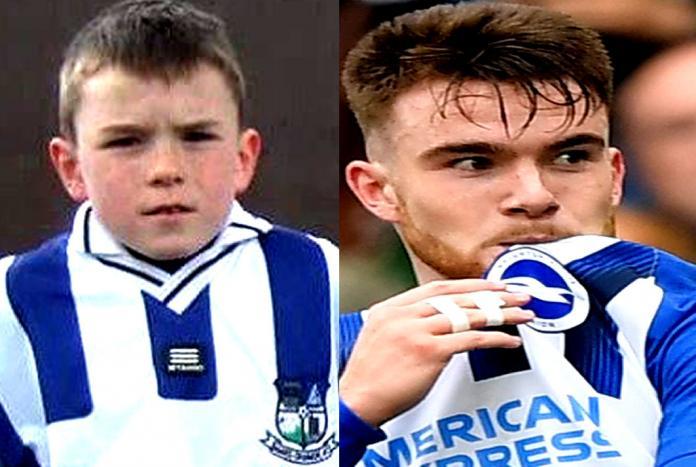 Our Biography of Aaron Connolly tells you Facts about his Childhood Story, Early Life, Parents, Family, Girlfriend/wife to be, Lifestyle, Net Worth and Personal Life.

In a nutshell, we give you the history of the Irish professional footballer. We begin from his early days, to when he became famous. To give you a taste of the engaging nature of Aaron Connolly’s Bio, here is a pictorial summary of his life.

Yes, everyone knows he was that prolific teen who downed Spurs on his first Premier League start of the 2019/2020 season. However, only a few consider Aaron Connolly’s biography which is quite interesting. Now without further ado, let’s begin.

For Biography starters, he is best known with the name “The whizzkid” and full names; Aaron Anthony Connolly. He was born on the 21st day of January 2000 to his mother, Karen Connolly and father, Mike Connolly in Oranmore, a town in the Republic of Ireland. Connolly was the first child born to his lovely  Irish parents pictured below.

Aaron Connolly has his family origin from Oranmore, a town in County Galway, west of Ireland. The place he came from is often referred to as the Cultural Heart of Ireland, a place known for its vibrant lifestyle and numerous festival celebrations.

Aaron Connolly wasn’t raised in a wealthy family background. His parents were like most people who did average Irish jobs but never struggled with money for family upkeep. According to social media reports, Aaron Connolly grew up alongside his brother named Ethan Connolly who just like him, also became a footballer.

Aaron Connolly’s parents initially wanted their son to be a scholar with no idea he would ever make it in sports. Back then, Connolly would go about his scholarly endeavours at Brierhill National School located in east Galway. While at school, he had a keen eye on the football field just beside the school which he usually plays football after he was done with classes.

A former teacher of Brierhill National school who goes by the name Conor Hogan remembers a young Aaron Connolly as the little boy who would wear football jerseys flying around the place and kicking the soccer ball, no matter the weather condition.

“I was a substitute teacher there for six months and I remember his class had about 30 lads and Aaron Connolly was among very few lads who were very sports-mad.” Conor Hogan, Aaron’s former teacher recalls.

As a young hurler, Aaron Connolly learned his football trade as a tough, diminutive forward. At some point, it occurred to his parents that there was never much doubt that Aaron was heading in the right direction. Finally, the pride of his Aaron Connolly’s family members and school teachers knew no bounds when he got invited to attend trials at Mervue United.

In the year 2011, Aaron Connolly made the move to Galway’s top schoolboy club Mervue United where he got accepted into the academy after passing their trials in flying colors. Understanding their boy’s desire to play football for a living, Connolly’s parents did all they could to support his aspirations.

It didn’t take long for Aaron Connolly to adapt and begin to make an impression in the academy and grabbing his first sporting honour (see above). He moved up the ranks very quickly and was invited to participate in several sporting competitions.

Aaron Connolly’s first major football success story came in a certain tournament when he scored 18 times as a 15-year-old. The whizkid’s achievement saw him helping his team win a local trophy which meant much to his parents.

Thanks to his success, he became the best player in the whole parish of Castlegar, Galway, Ireland. This feat also earned him the opportunity to get scouted by top English football clubs among whom was Brighton.

In the year 2016, Aaron Connolly made the decision to continue his footballing maturation process abroad. This was a time he made a move across the Irish Sea, joining Brighton & Hove Albion who invited him for trial after seeing his performances.

He impressed enough during his trials and the club to offer him a two-year scholarship. That year 2016, he was also invited to represent his Ireland U17 and participated in the Irish School FA Cup which he won.

Aaron Connolly grew from strength to strength for both club and country football. In 2017, he became the leading goalscorer in the qualifying stage for the 2017 UEFA European Under-17 Championship, scoring seven goals in six matches.

This performance got him fast-tracked in the Brighton & Hove Albion under-23 side where he made his debut at just the age of seventeen.

Winning this great award caught the attention of senior team manager Graham Potter who activated his Return to Brighton after a loan spell from Luton Town.

Aaron Connolly endured a meteoric rise to prominence on the 5th day of October in a match against Tottenham where he scored his first-ever Premier League goal, scoring twice in the 3–0 home victory. Below is a piece of video action. Credits to SpursTV.

Without a doubt, the wonder kid has proven to football fans that Ireland’s production line for forwards is NOT YET DRY!. The rest, as they say, is history.

Behind every successful man, there is a woman. For a footballer like Connolly, there is indeed a glamorous WAG… that is referring to his beautiful girlfriend who goes by the name Lucinda Strafford. As revealed by his social media account, both lovers began dating around January 2019.

Lucinda Strafford is without doubt a beautiful brunette who oozes confidence in every one of her snap. She is a selfless person who does nothing more than providing emotional support for her man even thou it means putting her own life on hold.

One of the couple’s favorite getaways for the summer is the Spanish Tenerife island and waters of Ibiza. As observed below, Lucinda is super affectionate with Aaron Connolly, whom she usually refers to as “her prince“.

Both Aaron Connolly and his girlfriend Lucinda are just about to be one of the most established couples of Brighton & Hove Albion Football Club. The fact that both they have been dating for a while now leaves no doubt that a wedding could be the next formal step.

Getting to know Aaron Connolly Personal Life facts away from seeing him in action on the pitch would help you get a complete picture of him.

Judging from the photo above, you’ll realize Aaron Connolly is an eccentric and energetic person who loves to stay happy with what he’s got. He finds it easily adapt to the energy that surrounds him and uses his mind at every opportunity.

Aaron Connolly is glad to have forged his family’s own path toward financial independence thanks to football. Right from his youthful days, his parents had played the usual role of taken all chances to see him play all his matches.

Both Mike and Karen caught an early flight in order to see his boy’s first Premier League start and first two goals. As Connolly took in the action, his proud Dad knew his son has finally fulfilled his dreams.

Getting to known how Connolly’s lifestyle as regards how he spends his monies would help you get a better picture of him.

Starting off, deciding between practicality and pleasure is presently not a difficult choice for the Whiz kid. Making money in football is just a necessary evil but spending it on his girlfriend  Lucinda Strafford as they visit beautiful destinations examples; ( Jamaica, St Lucia, Mauritius, Ibiza, Antigua and Las Vegas) seems to him, a normal lifestyle.

Aaron Connolly’s lifestyle isn’t as exotic as one would assume after looking at the photo above. It appears he still has a strong grounding in keeping his finances in check and well organized. As at the time of writing, there are no signs of Connolly showcasing flashy/ exotic cars, mansions, expensive wristwatch etc.

His Role Model: Just like many Irish footballers, Connolly adores Irish legend, Robbie Keane whom he is likened to. He repaid him by becoming the first Irish teenager (since Robbie Keane in 1999) to get a brace in an English top-flight game. Below are some of his goal-scoring techniques which is likened to the Legendary Robbie Keane. Credit to VTSports

He thought his Ireland senior call-up was a prank: Just a week after his brace against Spurs which fetched him a man of the match display, Aaron Connolly, Later that day received a call-up from senior Ireland boss Mick McCarthy for their country’s next upcoming Euro 2020 qualifiers against Georgia and Switzerland. He felt it was a prank after being told of the news. The rest, as he saw, became a history.

FACT CHECK: Thanks for reading our Aaron Connolly Childhood Story plus Untold Biography Facts. At LifeBogger, we strive for accuracy and fairness. If you find something that doesn’t look right, please share with us by commenting below. We’ll always value and respect your ideas.