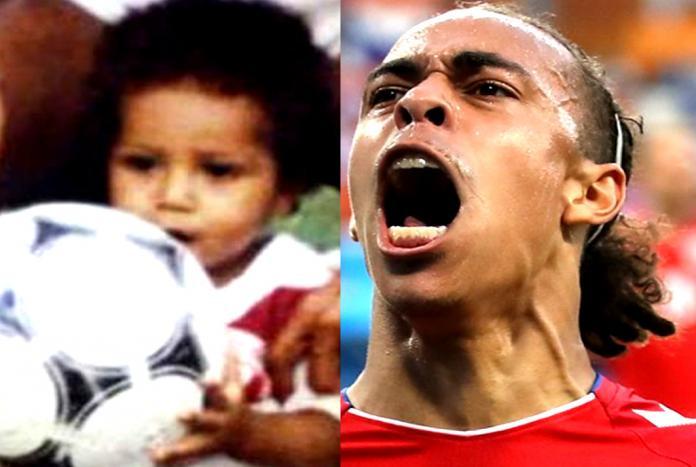 In a nutshell, we give you the history of Yussuf Poulsen, a Football Genius best known by the name “Yurary“.

Lifebogger begins from his early days to when he became famous with RB Leipzig and the Denmark national team.

To give you a taste of the engaging nature of Yussuf Poulsen’s Bio, here is a pictorial summary of his life story.

Yes, everyone knows about his authentic hairstyle (with ponytail), explosive power and eye for goal, which is an important attribute in the modern game of football.

However, only a few consider Yussuf Poulsen’s Biography, which is quite interesting. Now, without further ado, let’s begin.

For Biography starters, his full names are Yussuf Yurary Poulsen. Yussuf Poulsen was born on the 15th day of June 1994 to his mother, Lene Poulsen, and his late father, Shihe Yurary, in the Danish capital of Copenhagen.

Yussuf Poulsen’s parents are from different races, a fact which explains his multi-racial looks. He has his family origin from Tanzania through his father’s side.

Poulsen spent most part of his early years with his mother- Lene Poulsen, who is from Copenhagen, Denmark.

Now let’s give you some insights about his late dad.

Did you know?… Before Yussuf Poulsen was born, his dad, Shihe Yurary had a successful career as a shipper who worked in the import and export industry between his country Tanzania and Denmark.

On one of Shihe Yurary’s numerous visits to deliver one of his freight, he met and fell in love with Yussuf Poulsen’s mum (Lene Poulsen) in Copenhagen.

Nine months after they became intimate, Yussuf Poulsen, AKA Yurary junior, came to the world.

Before his father’s death, Yussuf Poulsen grew up in a middle-class family home. At some point, the early years of his life became riddled with uncertainties over the well-being of his dad.

Severally, Yussuf watched his dad battle with the sickness of cancer. Sadly, at the tender of six, Yussuf Poulsen lost his dad to cancer.

Before cancer took him away, Shihe Yurary tried to ensure a good life for little Yussuf, his little brother Isak and his mum, Lene.

Before his death, Yurary Senior was a big fan of football who didn’t just watch the games but succeeded in igniting his son’s passion for it at an early age.

While it was difficult for him to make it as a footballer due to his shipping commitments, Shihe Yurary, before his death, hoped to continue living his dreams through his son.

In order to honour his dad, Yussuf decided to pick off from where his dad left off, going to school and, at the same time, receiving soccer education locally.

As a little boy, he had an admiration for the Premier League, claiming he followed both Barcelona and Liverpool as a child.

Back then, in Copenhagen (capital of Denmark), there was only the Danish or English league, which was the only thing he could watch on TV.

Away from the hobby of watching TV, Yussuf Poulsen learned his football trade in the local fields of Copenhagen. While he played, the Tanzanian Dane took every opportunity to attend trials, an act that paid off.

After a successful trial, Yussuf Poulsen began his youth career with BK Skjold, a Danish football club from Østerbro, Copenhagen, which played in the Danish 2nd Division.

After his academy induction, Poulsen was accepted as a defender instead of the position he later played.

Giving football a good early start was what his late dad wanted for him. Early on in his career, Poulsen made lots of sacrifices in order to keep his father’s dream on track.

Making lots of impressions in the academy, the Tanzanian Dane pictured below moved up the ranks very quickly as he thrived against his opponents.

While still a teenager, the Copenhagen native, in the blink of an eye, began to grow up, achieving his impressive 1.93 m (6 ft 4 inch) height. In the year 2007, he was no longer used as a defender but as a defensive midfielder and attacker.

At the age of 14, Yussuf Poulsen’s quest to grow saw him joining the youth ranks of Lyngby BK, the top Danish club with a great reputation of projecting young stars to top clubs around Europe.

He continued playing as a forward at Lyngby, making his debut with the first team at just 16.

Yussuf Yurary Poulsen did not immediately establish himself in the first team due to stiff competition from teammates. However, after some deep thought about not wanting to disappoint his late dad, the Dane gathered momentum.

The Danish beast, as his friends would call him, immediately became a force to be reckoned with despite his young age.

It took no time before the hulking 6’4” striker became an undoubted hero for both his club and the countryside.

It took the interest of top clubs over Europe to beg for his signature after Yussuf scored a whopping five goals with his Denmark Under-19 side over the course of three games.

On 3rd July 2013, Yussuf Poulsen became one of the superstars brought in with is referred to as a long-term mission to make RB Leipzig become a Bundesliga giant.

The Dane joined RB Leipzig from Lyngby when the Red Bull-sponsored club was still in the third tier.

Yussuf Poulsen worked his way up through the divisions in Germany, helping RB Leipzig remain undefeated in the first thirteen league matches of the 2016–17 season.

His goal-scoring prowess saw him helping the club break a record for having the longest undefeated streak of a just promoted team in the Bundesliga.

Under Julian Nagelsmann’s reign, the power forward flourished greatly for The Red Bulls.

At the time of writing Yussuf Poulsen’s Biography, he is not the kind of striker who will score 20-plus goals a season and finish at the top of the goalscoring charts.

Instead, Poulsen is a hard-working forward who will win the ball back in dangerous areas and quickly start attacks – sometimes scoring great goals. The rest, as they say, is history.

As the words go; Behind every successful man, there is a surprised woman rolling her eyes. In this case of our beloved Tanzanian Dane, there is a glamorous girlfriend who goes by the name Maria Duus.

Both lovers, who probably met each other in their homeland, have been together since July 2015.

Staying together for this long indicates a healthy relationship, one which escapes the scrutiny of public eyes simply because it is drama-free.

One of the couple’s favourite getaways for holidays in the striking landscapes of Iceland, where they enjoy endless nights and summers where the sun never sets.

Maria Duus is a selfless person who does nothing more than providing emotional support for her man, even though it means putting her own life on hold.

As a reward for her emotional support, Yussuf Poulsen, on the 8th of September 2019, proposed to his girlfriend, making their wedding to be the next formal step.

Getting to know Yussuf Poulsen’s personal life facts away from football activities will help you get a complete picture of his personality.

Starting off, he is someone who can easily adapt to any energies which surround him, sometimes spending time alone and away from everything.

Away from football, Yussuf Poulsen has a strong belief in furthering his education.

He holds the belief that a career in football would not last forever, ensuring that there is the need to get his high school diploma.

As a result, the footballer juggles between his education and sporting career.

For being the breadwinner of his Poulsen family, Yussuf is glad to have forged his family’s own path toward financial independence, all thanks to football. Now let’s give you more info about his family members.

His name Yussuf comes from his father’s side as his late dad was a Muslim before he died.

In honor of his late father, Yussuf decided he would wear the kit with the name “Yurary” instead of ‘Poulsen‘ during the 2018 World Cup in Russia.

Yussuf Poulsen credits his success to the upbringing that his mother gave them. As a devoted mother, Lene’s dream is to see her son grow to be happy and successful as he has already become.

He has a brother who goes by the name Isak Poulsen, born in 2004. As observed below, both brothers share lots of fond memories together. Isak is super proud of what his brother has become in his career.

Getting to know his lifestyle facts would help you get a better picture of his standard of living.

Deciding between practicality and pleasure is presently not a difficult choice for Yussuf Poulsen as he truly knows how to enjoy himself.

Although Yussuf Poulsen believes making money in football is a necessary evil, however, he still feels the need to have a strong grounding in order to keep his finances in check and well organized.

As a result, he lives an average lifestyle despite his 2 Million euros (1.8 Million Pound) per year salary.

Yussuf Poulsen has a special lucky charm tattoo on his left wrist, one which is hardly seen by fans. Aside from his wrist has the write-up “Shehe” and another “1956-1999” on the opposite side.

While little is known about the first, the second serves as a secret tattoo for his dead father. It is a reminder of his father, who was born in 1956 and died of cancer in 1999.

He is Very Realistic about what he can and cannot do:

Yussuf Poulsen believes he can’t play for Barca despite supporting them as a child, claiming he is being honest with himself. In his words with kristinavomdorf, he once said;

“I have to be honest with myself and know what I can and can not do. I can not play in Barcelona, maybe I will never be able to”

FACT CHECK: Thanks for reading our Yussuf Poulsen Childhood Story plus Untold Biography Facts. At LifeBogger, we strive for accuracy and fairness. If you find something that doesn’t look right, please share it with us by commenting below. We’ll always value and respect your ideas.