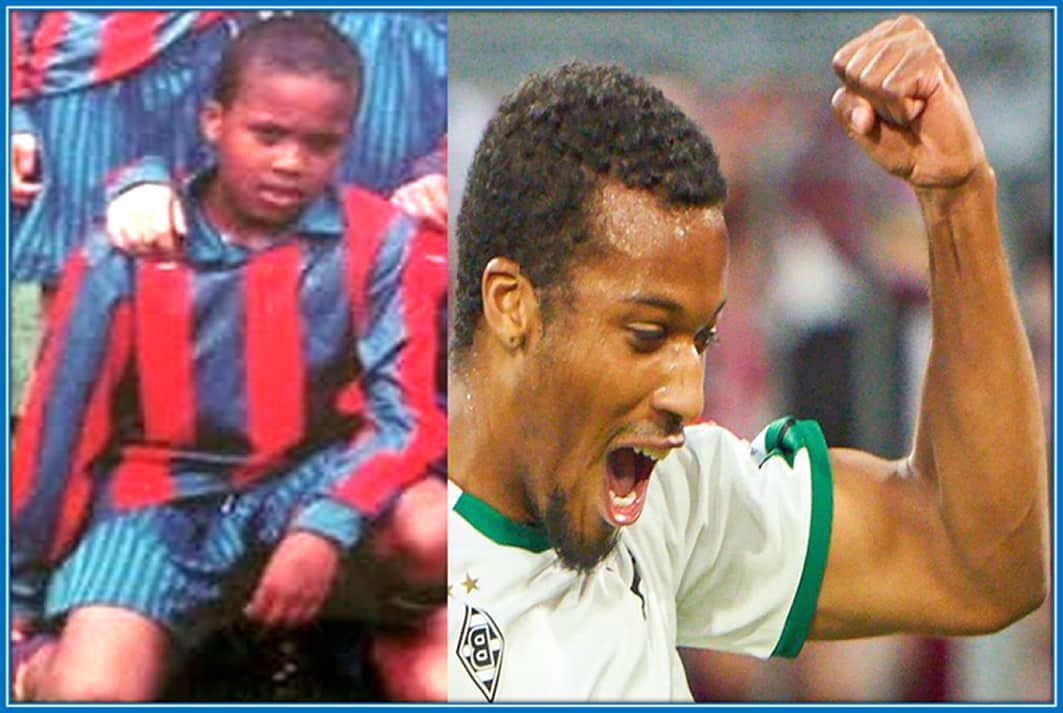 Our Biography of Alassane Plea portray Facts about his Childhood Story, Early Life, Parents, Family, Girlfriend/Wife to be, Lifestyle, Cars, Personal Life and Net Worth.

Lifebogger has a concise presentation of his Life Journey, from his early days, to when he became famous.

To give you a taste of the engaging nature of this write up, here is a pictorial summary of his career progression. It is no doubt, a perfect summary of Alassane Plea’s Bio.

Yes, you and I probably got to know him in the group stage of the 2020/2021 UEFA Champions League season.

Aside from his formidable partnership with Marcus Thuram via breaking defenses and scoring goals, only a few fans have read his Life Story which is quite engaging. Now without further ado, let’s begin.

For Biography starters, he bears the nickname is Lasso. Alassane Alexandre Plea was born on the 10th day of March 1993 to his father, Sekou, and a French mother, in the city of Lille, northern France.

The Footballer is likely to be the only child born of the union between his parents who are of different family origins.

The neighborhood in which young Lasso grew up at Lille was a violent one. Back then, the use of drugs and violence were the order of the day.

Truth is, it was Plea’s early interests in football that kept him away from becoming involved in the immoral world of northern France.

Did we mention that Lasso’s neighborhood mainly comprised of social housing projects? It is a clear indication that Plea had a middle-class upbringing at best or his parents were lower-class citizens at worse.

We bet it will surprise you to know that the forward is biracial. It is what it is. His dark complexion and absence of striking colored eyes do not negate the fact his mom is French.

On the other hand, Alassane’s dad is Malian, like from the African country called Mali.

Some of the forward’s early memories of soccer include watching Zinedine Zidane and Ronaldo Luis Nazario de lima strut their stuff at UEFA Euro 2000 and the 2002 FIFA World Cup.

Interestingly, it was in 2002 that Plea was seen by scouts from US Ascq. They saw striking prospects in the lad and gave him their number 10 jersey. Thus began the then 8-year-old’s journey in career football.

Having learned the basics of soccer at the Villeneuvois club, the soccer prodigy began seeking stiffer competitions.

Luckily, he got a place at ES Wasquehal in 2008. It was at the club that Plea caught the attention of Olympique Lyonnais in 2009.

From the beginning, all was well for the rising talent who trained with the likes of Alexandre Lacazette and Samuel Umtiti.

His future was undeniably bright. Upon signing his first professional contract with Lyon, Alassane Plea’s parents knew his time had come. In fact, the world was just about becoming his oyster.

Following a six-month loan spell at second-tier AJ Auxerre, he left Lyon for Nice in the summer of 2014 to seek more game time. Midway through his career with The Eagles, Plea suffered a grave knee injury.

After going through surgery, he was told he had a tear in the meniscus. The development was a setback that made him doubt whether he will ever succeed as a footballer.

Sadly, he called his dad crying, but his father assured him that all was going to recover. See the face he made before being discharged to continue playing. 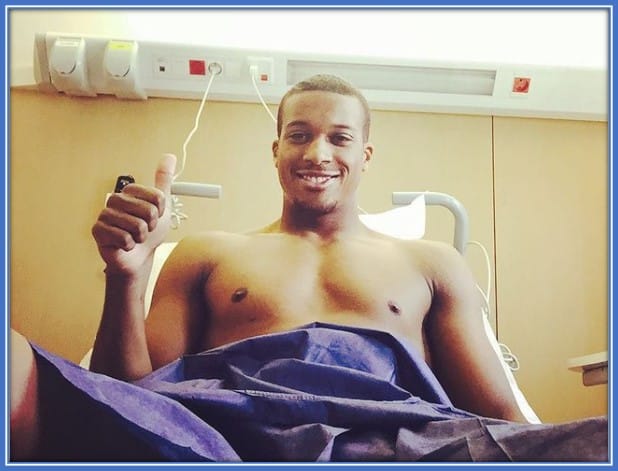 Fortunately, Lasso recovered and found his old strength at Nice. Playing alongside Mario Balotelli, he proved to be more than a wingman by finding the back of the net 27 times.

In 2018, Lasso joined Borussia Mönchengladbach on a five-year deal.

Ever since Plea joined the club, he has been receiving praise for adding a creative edge to their attacking output.

Scoring a three-pack in Borussia Mönchengladbach’s 6-0 clearing of Shakhtar Donetsk arguably became Plea’s best in the 2020/2021 season. It was the club’s largest victory in competition history. The rest, as they say including his highlight below, is history.

Who is Alassane Plea Girlfriend and Wife to be?

Asides from being a master of defense upsetting passes, the handsome footballer is good at keeping things private.

Thou we can confirm that he is a father, however, there aren’t leads to who his lucky girlfriend or wife is.

The woman in his life is likely to be his girlfriend because married footballers are big on showing off their partners.

Meanwhile, we are yet to receive information regarding the player’s child who was born in October 2020. Is it a male or female? Time shall tell.

Whenever football season break approaches, our boy’s heart loves warming to be with a particular set of persons.

They are his family. Here, we’ll bring you facts about Alassane Plea’s Parents. Also, we will provide facts about his siblings and relatives.

Sekou is the name of the forward’s dad. He was born in Mali but migrated to France when he was 17.

The supportive dad who has been an integral part of his son’s life and rise is a familiar face to sportswriters. Such is how he loves the game and his son.

Amazingly, Sekou is a varsity lecturer as of the time of writing this piece of Alassane Plea childhood story and biography.

The forward’s mom is of French descent. She is all white and motherly to the striker who credits her for instilling in him the value of charity.

Thanks to his mum, Plea still loves promoting charitable endeavors as he once noted that his commitment to it brings him back to the real world.

He was evidently talking about charity and how it makes him aware that there are people in need. This act wouldn’t have come without this beautiful woman – his mum.

The forward is most likely the only child born to his parents. There aren’t records of anyone identifying as his brother or sister. Neither has he said anything about having siblings.

How does it feel to an only child? Plea must have a lot to say about that.

Let’s move on from his immediate family life. Are you aware that information about his extended family life is non-existent?

There are no leads to the player’s paternal and maternal grandparents. Similarly, his uncles, aunts, cousins, nephew and nieces are yet to identify with him.

Who is the son of Sekou beyond being your favourite soccer star? stay put as we unravel facts about him to ensure that your love for him never dies.

There’s a lot we could write about the amazing superstar persona. However, we are not fans of taking the mystery out of a player.

We suggest that you meet him or watch his interviews to get a personal feel of his handsomeness, smiling plus the amiable and discreet character that precedes him.

Plea is not all about the game of football. He loves basketball, tennis, ski. Added to the list of his hobbies is traveling, swimming and spending quality time with family and friends. How more complete can a player be?

Regarding how the son of Sekou makes and spend his money, he is living pretty large on wages and salaries he gets from being top-flight soccer star.

Being a young and exciting player, he has more than a decade of sponsorship and endorsements to enjoy and improve his net worth of 6.5 million Euros.

Are you aware that the striker has a cool car which he uses to storm training? We bet he also lives in a beautiful house. Never underestimate the purchasing power of €60,000 weekly wage!

We can’t have too much of a good thing. To wrap up this article on Lasso’s childhood story and biography, here are 3 things about the Gladbach’s star boy. They are technically lesser-known or Untold facts about him.

Since you started viewing Alassane Plea‘s Bio, this is what he has earned.

In case you didn’t know, the name Alassane is of Arabic origin and it means “Handsome.” Thou, it is easy to believe someone like Houssem Aouar is a Muslim but the name – Alassane Plea – doesn’t sound too Islamic to many. The Footballer has publicly shown he is proud of his religion.

This strongly suggests that his dad who is a Muslim has passed on his beliefs to the soccer genius son.

Thanks for reading this informative piece on Alassane Plea’s childhood story and biography. We hope it has inspired you to believe that setbacks are part of success stories. Just like Plea suffered the setback of a knee injury before his breakthrough.

It behooves us now to commend the striker’s parents for their support to his career in words and deeds. Like the famous N’Golo Kanté, Plea is one of those of Malian descent who still gets lots of love from his kindred in the West African country.

At lifebogger, we take pride in delivering French Football players childhood stories and biography facts with accuracy and fairness.

If you see anything that doesn’t look right, do well to contact us. Otherwise, make a comment after taking a quick tour of Plea’s Biography summary in our Wiki table.