LB presents the Full Story of a Left Back Genius best known by the Nickname; ‘Magic Dwarf’. Our Xherdan Shaqiri Childhood Story plus Untold Biography Facts brings to you a full account of notable events from his childhood time till date.

The analysis of the powerful Swiss professional footballer involves his life story before fame, relationship life, family life and many OFF-Pitch little-known facts about him.

Yes, everyone knows about his unpredictability but few consider Xherdan Shaqiri’s Biography which is quite interesting. Now without further adieu, let’s Begin.

Xherdan Shaqiri was born on the 10th day of October 1990 in Gjilan, a city and municipality located in the Gjilan District in eastern Kosovo, Serbia (former Yugoslavia).

Xherdan Shaqiri parents emigrated to Switzerland in 1992 with their three siblings. Ideally, Xherdan has multiple nationalities. They include; Swiss, Kosovo, Albanian and Swiss. Xherdan acquired his Swiss citizenship through naturalization. As a new immigrant, Xherdan Shaqiri’s integration into the Swiss culture was swift. During his school days, he was seen as the only alien in the class.

He worked in his dad’s Alpine farm while he was back from school. He would also help his mum, Fatime sell clothes after returning from her cleaning job.

Xherdan’s father was motivated to encourage his sons to start football after seeing young migrants taking football to quickly get out of poverty. He quickly registered his three sons at a nearby local youth club, SV Augst in the year 1999.

It was the youngest (Xherdan Shaqiri) who scaled through the trial. He started out well for the club. “Do not forget where you’re from,” Xherdan’s dad would tell him before any major competition.

Constantly being the top player in his team granted him a place at FC Basel. There, he won several honours including three Swiss Super League titles, before moving to Bayern Munich, where he gained eight domestic and international honours despite playing less frequently.

In January 2015, he moved to Inter Milan for a fee of €15 million, and seven months later to Stoke City for a club-record £12 million. The rest, as they say, is now history.

Once upon a time, there was a rumour of Xherdan Shaqiri having a girlfriend or wife, though it later became unproven.

However more recently, a piece of new evidence arrived. The Magic Dwarf was finally caught openly in a Stoke restaurant flirting with a model named Angelica. Here is the Magic Dwarf. The Swiss-Albanian player later told the press: “I didn’t notice paparazzi taking pictures of me.”  And about Angelica: “Some friends of mine brought the lady to the restaurant. She’s not my wife. That’s all I can say for now!” Well, Shaqiri couldn’t be clearer than that!

Having his migrant father as a local Alpine farmer and migrant mum as a cleaner literally means coming from a poor family background. This was the case of Xherdan Shaqiri before football investment paid off.

Isen Shaqiri is known to be a strict and very controversial father. His unmatched work and the act of pushing his sons to face their fears is solely responsible for Xherdan becoming one of Swiss’s biggest football talents. Isen now takes all the glory of his son’s success after carefully nurturing him right from his youth.

In his words Papa Isen: “We also had difficult times in our lives, we know the poor and the rich. I have always given my sons full support for football.

The fact that my children were not born with the golden spoon in their mouth only made us stronger.

Among my three sons, the fate that distinguishes Xherdan is innate, fortunately! Because that makes him more special.”

Thanks to his son’s wealth, Isen Shaqiri was forced out of retirement from his farm work. These days, he does no other thing than to watch his son together play football.

Below is Isen Shaqiri and his wife, Fatime Shaqiri attending a training session of their son.

Big football Monies earned by Xherdan Shaqiri is well invested, preferably in real estate which is managed by his dad, Isen Shaqiri.

MOTHER: Xherdan’s mum Fatime, in terms of her personality is very protective of her son. When “Shaq” calls his mum, she does not want to hear anything sporty. She only wants to hear he’s fine and not having any football injury.

In her words of Mama Fatime: “Xherdan always liked my food. He especially loves my Albanian specialities. Unfortunately, I’m not allowed to cook for him because he lives far away in England. He feasts on my food whenever we visit ourselves.”

ROTHERS: Arianit Shaqiri and Erdin Shaqiri are the two elder brothers of Xherdan Shaqiri. Erdin currently manages his career as at the time of writing.

He lives in Stoke-on-Trent, England. His other brother Arianit lives with him in Munich. He is a close friend of Frank Ribery. Both Erdin and Xherdan play a lot of ping-pong and PlayStation at home.

SISTER: Medina Shaqiri is the only sister to Xherdan Shaqiri. She currently lives in Switzerland and oftentimes, visit her brother in England (His country of play as at the time of writing). In her words…  “I am the smallest of the family and I really like all my three brothers. Unfortunately, I hardly see Xherdan because of his football commitments. I’m the biggest fan of his and hope he wins a lot in his career. We are all very proud of him. “

Xherdan Shaqiri has never missed a training session since he was eight years old. The explosive power athlete is known for demanding his own type of training.

In fact, he takes his own massive pole with him to training. He loves to put lots of weight on his shoulders which pushes the world down.

The ‘Magic Dwarf’ is known for his short stocky frame which makes his leg movement perfect. If you want to build a strong set of legs you have to lunge. Lunge your heart out. That’s what a young Shaqiri must have been told as a child. 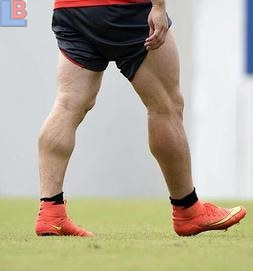 Whenever the Stoke City team bus would break down, the dependable Swiss powerhouse would get off and drag it the rest of the way before putting in a 90-minute shift in midfield.

Indeed, his physicality below shows he is able and capable of dragging a bus to its destination. His movement has benefited his yam-shaped legs which is the foundation of his strength and conditioning. With his kind of calf muscle, there has been a lower risk of injury. In fact, some of his fans have said he was born under a leg press machine. The origin of his Calf muscle started back when Shaqiri was a wee child. Apparently, his parents refused to buy him a space hopper as a nipper.

So Shaqiri would bounce around his neighbourhood on his imaginary hopper, which saw the beginnings of his awesome leg power.

FIFA’s official website describes him as “unpredictable” on the ball and thus called him “the magic dwarf”.

Shaqiri is known as the Alpine Messi, not just for his speed and talent, but for sharing the same stature. Shaqiri and Messi are both roughly around 1.69m, with a low centre of gravity, which assists in their remarkable style of play.

This fact made Shaqiri to be chosen to be on the cover of FIFA 15 in Switzerland next to Lionel Messi.

In Swiss, some plastic Coca-Cola bottles have on it, a wrapped image of football star Xherdan Shaqiri. Shaqiri was once chosen as the promoter for Coca-Cola.

Now, his excellent performance with Bayern Munch, Stoke City as well as the Swiss National team has made him the face of Coca Cola in the Swiss market.

Many youngsters and older Swiss people are fond of asking for the can with Xherdan photo on it. This leaves the other Coca-Cola drinks without his picture to be less sold. They are always willing to buy the drink.

Xherdan Shaqiri has been in the hearts and minds of Swiss football fans. Monies won through codes revealed in Shaqiri’s Coca-Cola bottle covers has made many Swiss richer. The Swiss is a true Muslim. His religious faith was tested during the 2014 FIFA World Cup. For the first time in nearly 30 years, Ramadan fell during the World Cup. It was a period where all Muslims are supposed to fast from sunrise to sunset for 30 days. During the tournament, most Muslim footballers opted out.

Xherdan, unlike Mesut Ozil, faithfully observe fasting during the 2014 FIFA tournament even while he featured for his Swiss national team. Ideally, he is a Muslim who believes in Jesus Christ and also celebrate Christmas.

Xherdan Shaqiri is Libra and has the following attribute to his personality. Thanks for reading our Xherdan Shaqiri Childhood Story plus untold biography facts. At LifeBogger, we strive for accuracy and fairness. If you see something that doesn’t look right in this article, please place your comment or contact us!

This means,when you want to achieve something that you like,you will do it,no matter the cost.
Xherdan, we are proud of you,I am sure you know that… .
But ,we are waiting for the day that ,you will play for Kosovo,that is going to be the Peak.thank you

hey! it’s such a great post. Xherdan Shaqiri is really a very amazing player and i am sure he will achieve many things in his football career. i really appreciate your work. I have also written an article on Xherdan Shaqiri. please check it out, looking forward to some healthy chat/discussion someday. Thank you