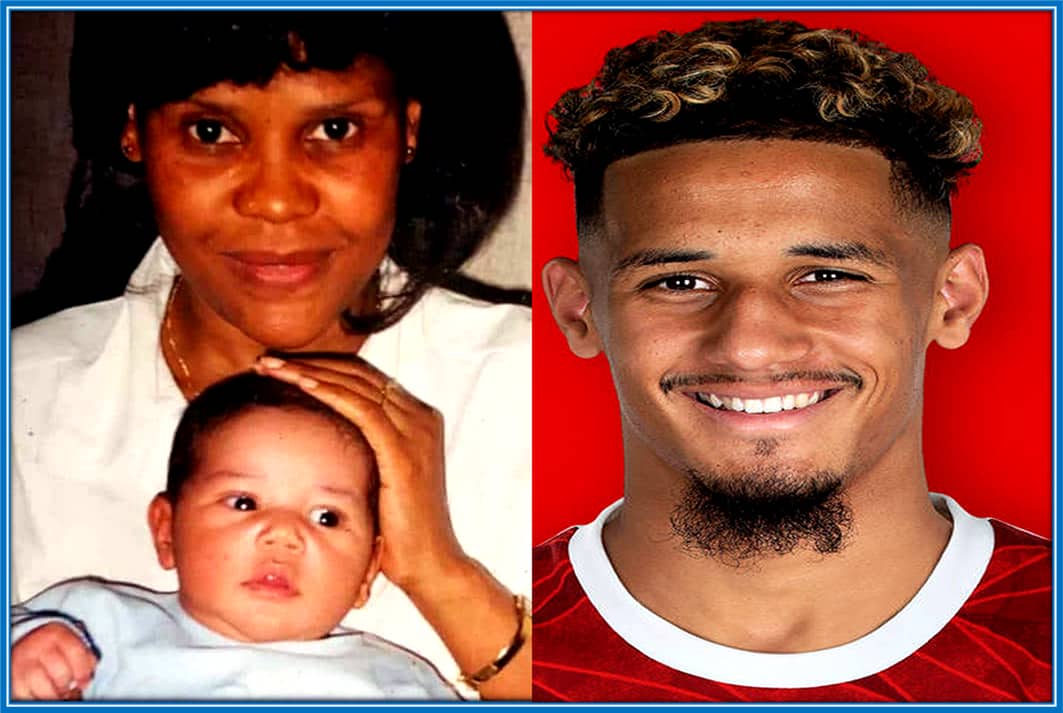 Our William Saliba Biography tells you Facts about his Childhood Story, Early Life, Parents, Family, Girlfriend/Wife to be, Lifestyle, Net Worth and Personal Life.

In the nutshell, this is a Life Story of Saliba. We begin from his boyhood days to when he became famous.

To whet your autobiography appetite, check out his childhood to adult gallery — a perfect intro to our version of William Saliba’s Bio.

What does Mikel Arteta observe in his profile? Why would he strongly want him to be the future of the Gunners defence?

Finally, why do French and Arsenal fans believe Saliba has the potential of being ranked among the 50 Greatest Defenders in World Football? Read on as we present you astonishing truths behind his incredible Life Story.

For Biography Starters, his full names are William Alain André Gabriel Saliba. William Saliba was born on the 24th day of March 2001 to a Cameroonian mother, and a Lebanese father, in Bondy, a commune in the northeastern suburbs of Paris, France.

In the quest of uncovering the identity of William Saliba’s parents, we did pick up a rare childhood photo of the Footballer sitting comfortably in the bosom of his mother’s loving arms.

As a little boy, Saliba developed a kin interest in football. Did you know?… He was a die-hard Gunner fan right from his early days.

The truth is, no one, even William Saliba’s family members, had ever envisaged that the young lad would end up playing for the club he so much admires. Pictures indeed, don’t tell lies.

Now, you’ve realized that the club has been a driving force of Saliba’s football passion since childhood. Growing up as a little boy, William Saliba’s parents gifted him an Arsenal jersey, which made him happy (as shown above).

Interestingly, the jersey became his favourite childhood cloth as you’ve noticed him wearing it during outings with friends.

Digging into his ancestry roots, we found out that his paternal Surname “Saliba” is predominantly of Lebanese descent. This is near similar to that of Jordan and Andre Ayew, whose parents (their Mum) hail from Lebanon.

Although no official validation has been made about his father’s lineage or ethnicity. However, we strongly believe that William Saliba’s father is of Lebanese heritage.

On the other hand, the Footballer has West African maternal ancestry. William Saliba’s mother is purely of Cameroonian descent – similar to the Dad of Erik Choupo-Moting.

As we had earlier seen in his childhood photo, which shows his mother having a black complexion- a clear proof of her African heritage.

First off, he wasn’t born in a super-rich home. Owing to the fact that Saliba hails from a middle-class family background, the likelihood of being allowed to run around the streets playing with other kids was always there.

Always, when his friends bring up a football-related discussion, the young lad would innocently declare his profound affection for Arsenal FC, using it to win debates. Here is what he told Gunner’s media during an interview;

“I fell in love with the badge and History of Arsenal since I was a kid and I’ve been watching the club perform in various tournaments.”

The Role of Kylian Mbappe’s Dad in William Saliba’s life:

Over the past few years, Bondy has provided a good number of elite soccer stars. Many of them, including William Saliba, found it easy to plunge into the world of football, thanks to their upbringing in the northeastern suburbs of Paris – Bondy.

Knowing fully well that Saliba possesses the potential to become an excellent star, Wilfred took him under his wings.

Therefore, he enrolled Saliba at Bondy academy, where Kylian Mbappe had received his earliest football lessons.

Do you know?… Wilfred spent six years coaching and training young Saliba at AS Bondy. Back then, Saliba often visited Kylian’s home since they attended the same school.

As Saliba continued to train, so did his football prowess improves. Here is what he said about his first football coach;

“Wilfried taught me everything, and my achievements can be attributed to what I learnt from him.”

In no distant time, Saliba left AS Bondy and joined FC Montfermeil.

Upon his arrival to Montfermeil, Saliba took up an attacking role. But he found it difficult to perform effectively in the position. Hence, he switched to a defender while still in his youth.

Working his way up the ladder of success turned out to be more difficult than Saliba had envisaged.

At first, he left Montfermeil for St Etienne and joined their U-17 side. It took Saliba consistent training to rise through the ranks of St Etienne.

Barely a year after joining them, he saw promotion to their U-19 side and, thereafter the senior squad.

At this point in his life, Saliba gained the life-changing privilege of signing his first professional contract with Saint-Etienne at the age of 17.

Forget about the earlier photo; this time, he had grown even taller and bigger than Mbappe. 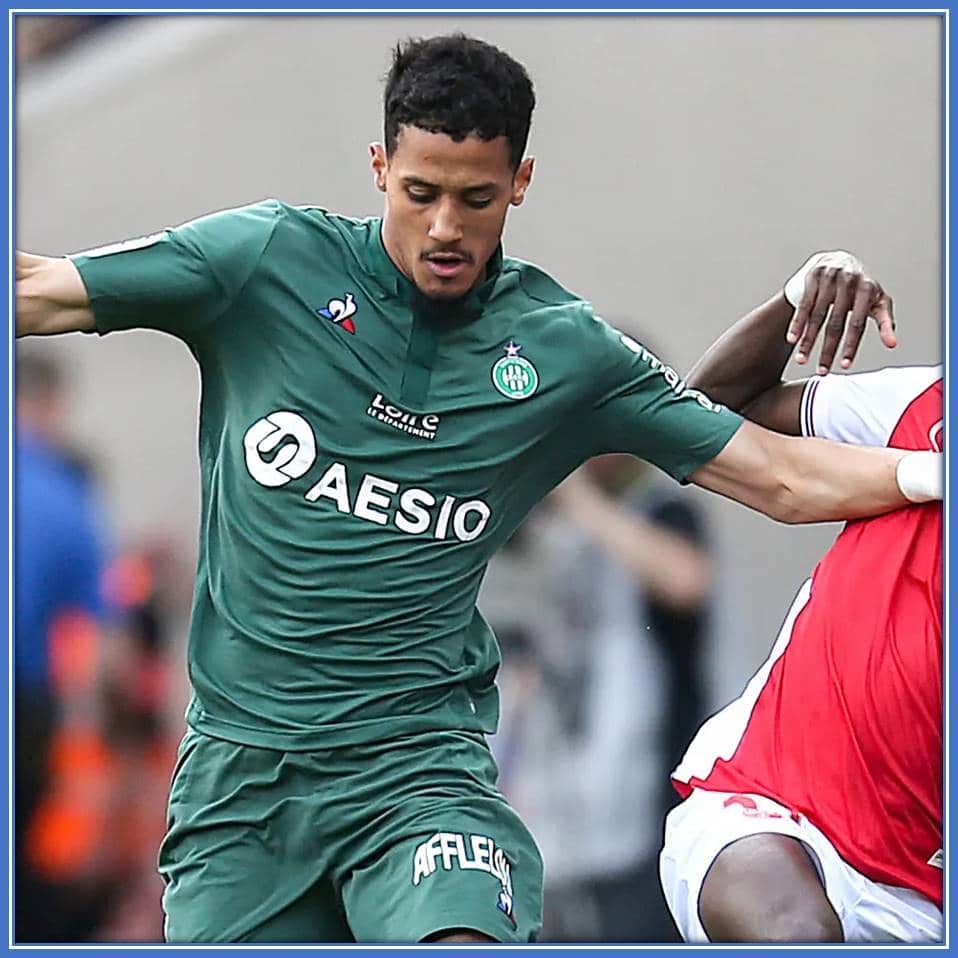 Just about a year before signing his first professional contract, Saliba debuted for France’s U-16 side. Thankfully, his football proficiency cemented his slot in the U-17 and U-20 of French Soccer.

Do you know?… Saliba signed a £27 million deal with Arsenal in July 2019. Funny enough, the contract term includes the fact that Saliba will stay on loan with Saint-Etienne for the 2019-20 season before rejoining the Gunners in 2020.

Fast forward to the moment of writing this Biography, the young defender has returned to Arsenal to put up a good show.

Interestingly, Mikel Arteta has come up with a brilliant strategy of solidifying his defence line with Saliba and Gabriel Magalhaes, who recently joined his side.

The rest, as we say of the Power House, is now history.

Who is William Saliba’s Girlfriend?

I am sure the looks of the former Saint-Étienne Man have raised a lot of questions about his relationship life. Many people are too curious about who the girlfriend of the handsome William Saliba may be.

Judging by the above, there is no denying the fact that he wouldn’t be an A-lister for ladies who wish to be his girlfriend, wife or mother of his children.

Forget about his tallness, Saliba is still young. At the moment, he is completely committed to working his way up to the level of the Best Arsenal Defender of the Premier League Era. Hence, the need to show fans his girlfriend is the last thing that worries him.

The Life Story of the Footballer would have taken a different pathway if not for the help and support of his household.

Hence, we’ve compiled a piece of comprehensive information about William Saliba’s family, starting with his parents.

About William Saliba’s Father and Mother:

In as much as the Arsenal Defender shows his gratitude to Kylian’s father for training him, he would always be grateful to his parents for raising him.

Do you know?… The childhood of William Saliba was devoid of solitude owing to his mom’s warm company. Only time will reveal the relationship that existed between Saliba and his dad.

Officially, the French Defender has addressed no one as his brother or sister.

However, he was captured in a snapshot (shown below) with a little girl of black complexion back in his childhood days.

Hence, there is a slight probability that William Saliba has at least one sister.

It is difficult to talk about Saliba’s paternal and maternal grandparents owing to the ambiguity of his ancestry.

In order to maintain his privacy, the France Footballer has kept silent about his relatives. Therefore, there is no information about Saliba’s uncles and aunts.

First and foremost, he has hearty compassion for things he holds dear. Believe it or not, the youngster is emotional, and no wonder he is quickly moved to expressing his gratitude or apology in different situations.

Talk about his horoscope, and you would find out that Saliba is a blend of Aries zodiac trait. Most people think he is weird because of his secretive nature.

Notwithstanding, his former teammates have attested to the fact that he is quite a fun-filled character who appears more lively than he looks. 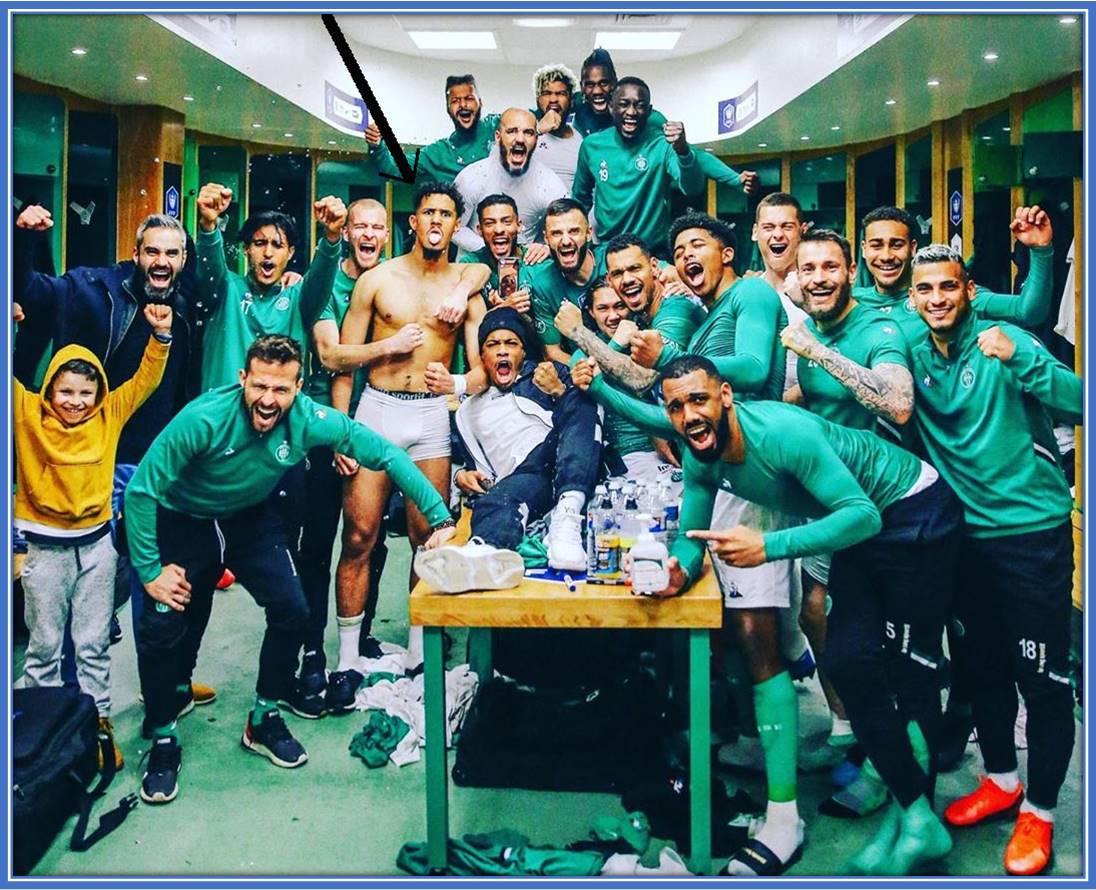 Interestingly, the young lad who recently became famous has amassed a ton of financial proceedings. Even Saliba has never envisaged the fact that his Life Story would be graced with enormous wealth.

At the instance of writing this Biography, there have been a variety of opinions about William Saliba’s Net Worth. However, SoFifa estimates his market value at about €24.5 million.

Our Bio of Saliba has a breakdown of weekly, monthly and yearly wages- a feat that will help you determine his net worth.

Believe it or not, the Frenchman owns an expensive house and some exotic Autos. William Saliba’s car of choice is the Mercedes.

The truth is, he has the desire to live a luxurious lifestyle. However, the young French Star does not drive pleasure in showing off his possessions.

To wrap up our Bio, here are a few facts that would help you get a full grasp of the Soccer Genius.

It is unbelievable that the average Britain citizen will have to work hard and tirelessly for four years and five months to earn Saliba’s monthly salary with Arsenal.

Secondly, we’ve strategically put up an analysis of his wages as the clock ticks. Find out for yourself how much the Big Man has earned since you came here.

This is what William Saliba has earned just after you began reading his Bio.

The Special One Likes Him:

For a long time, Jose Mourinho has taken a liking to Saliba. If not that Arsenal has been his childhood club, he would have preferred working with the Special One. On one occasion, Mourinho once remarked that;

“William Saliba has all the armoury to become an excellent player, just like ​Kurt Zouma, who I signed [from Saint-Etienne].”

Because he is still young, Saliba is stocked up with the potential of showcasing lots of football prowess like Niklas Sule.

Indeed, his attribute on FIFA surely makes him one of the Solid Youngsters to sign for the FIFA career mode. 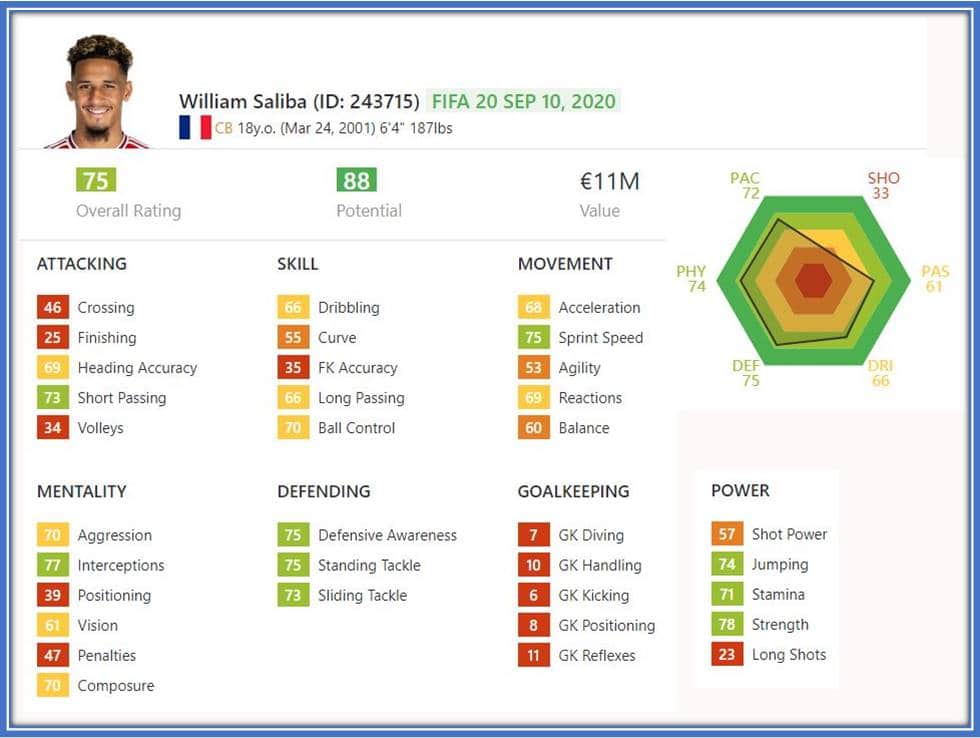 To get a quick summary of his Bio, kindly use the table below.

Often, our in-depth childhood desires and aspiration may end up becoming the building blocks of successful Biographies.

Almost everyone has a childhood dream; however, only a few people are fortunate enough to fulfil their ambition. We credit William Saliba’s parents and Kylian Mbappe’s dad for their roles in his life.

Finally, we at Lifebogger appreciate you for your time spent reading William Saliba’s Bio. Kindly tell us your opinion on the French Defender.