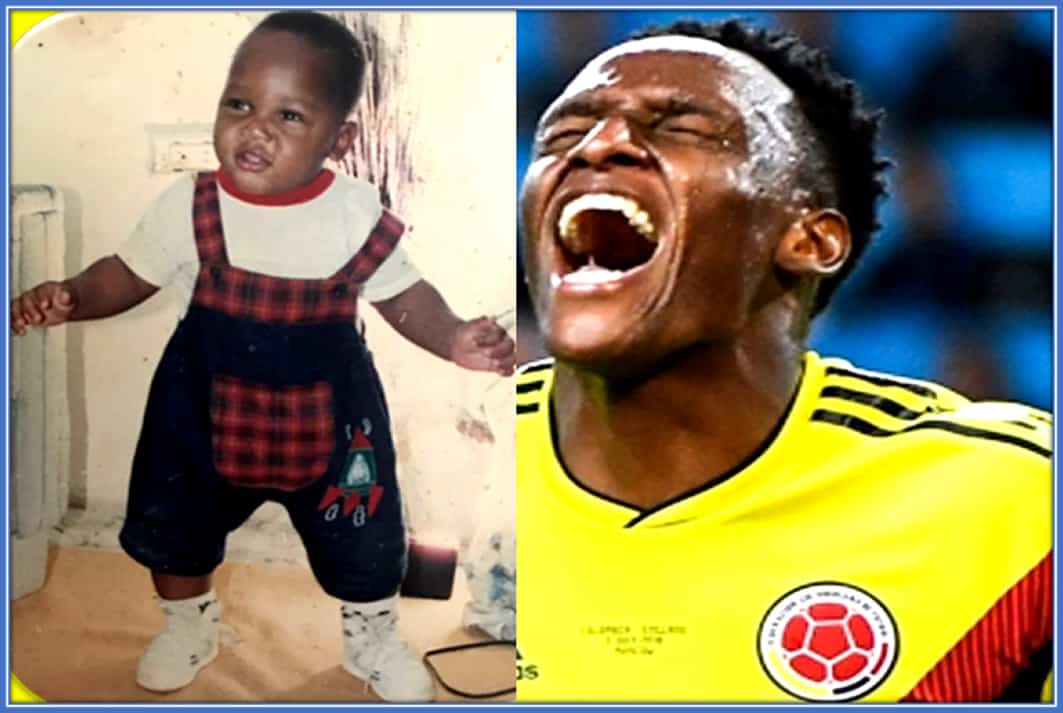 Yes, everyone knows he attained global fame at the 2018 World Cup, scoring three goals for Colombia – all headers.

Despite this accolade, only a few have read a detailed version of Yerry Mina’s Life Story. We’ve prepared it, for the love of the game. Now without further ado, let’s begin.

For Biography starters, he bears the nickname – The Gold Mine. Yerry Fernando Mina González was born on the 23rd day of September 1994 to his mother, Marianela González, and father, José Eulises Mina in the town of Guachené, South west Columbia.

In fact, Marianela (his Mum) choose the name ‘Yerry’ because of her love for Jerry – in that cartoon series. She named him Yerry by taking the ‘J’ out of her favorite carton character – Jerry (the Mouse).

Yerry Mina is the first son and child out of two children born of the union between José Eulises Mina and Marianela González.

He spent his early years alongside his half-brother, Cristian Andrés, and a younger brother, Juan José.

Mina, like all first born of families, was a celebrated child. Our research team tagged this photo as one of the best moments of his unforgettable childhood.

Since his early years, members of his household, also his neighbors, view Yerry as a humble boy who had the natural flair for respecting people.

He was the type who never complains about what Marianela and José (his parents) couldn’t afford him.

As the firstborn, Yerry learned to shoulder the responsibility of setting an example at home. Starting off, he looking after Juan José and Cristian Andrés, his kid brothers.

Also as a child, the future star has been a big Dog admirer. His love for pets followed him to adulthood. Here is the footballer with his Dog named Madonna.

The Columbian comes from a sporting household, one with a lifestyle centred around the love for goalkeeping.

Yerry Mina’s father, José Eulises Mina, was a goalkeeper before retirement. As a result, the youngster aspired to be like him.

In fact, even Mina’s uncle was a professional goalkeeper. No wonder our boy found his occupation early.

A point to note, the Defender also comes from a poor family. José Eulises Mina’s goalkeeping job yielded little monies for his household.

First thing first, the Columbian does not come from one of his country’s biggest cities – Bogotá, Medellín, Cali, etc. The truth is, Mina’s family roots say a lot about his humble beginnings.

For the purpose of clarity, Guachené is a small market town of approximately 20,000 people – many of whom honor Yerry as their hero.

This was where he grew up, dirt poor. Again, 99% of the people in this town are Afro-descendants, including the footballer.

Yerry Mina’s parents never accepted the idea of a total focus on football during his pre-teenage years.

As a precaution should in case football fails, Marianela and José urged Yerry to study up to his academic BAC (secondary education level).

As expected, the humble boy made his Daddy and Mummy proud before putting his full attention to sports.

Yerry got the best education in his hometown of Guachené. Subsequently, when the time got right, he accepted his calling (soccer) – as a late boomer.

Starting off his youth career, Yerry’s genes began playing the role of towering his body’s height, size, and appearance.

Because of his tall nature, our boy fancied becoming a goalkeeper. In response, his father and uncle disapproved. Speaking about the intent, Mina once said;

Back in the days, he struggled financially in the quest to have himself transport to training. In the quest to reduce the burden on his parents, Mina formed the habit of jumping onto lorries that stopped at red lights.

Thanks to hard work and consistency, he became a graduate of Deportivo Pasto at 18. In no time, Nature began blessing the towering center back with a great posture, one which made him look like a giant.

Yerry played with confidence, displaying unrivaled football prowess more than anyone else on his team. Thanks to his bravery, a top tier Columbian team – Independiente Santa Fe – secured his services in 2013.

Mina immediately became an instant hit with his new club. Becoming a regular starter for the Cardinals, he helped them win two major cups – the Copa Sudamericana and Superliga Colombiana – all in 2015.

The 1st day of May 2016 witnessed a massive upliftment in his life. Mina got confirmed as the new player of Palmeiras, a Brazilian Sao Paulo club that has legends like Jabroil Iso, Rivaldo, va Roberto Karlos.

As a result, Mina became instrumental in helping his team win the Campeonato Brasileiro Série A trophy.

Thanks to a series of impressive performances, Yerry saw his country listing him as a key member of their squad.

The towering center-back played a major role in the global campaign. In that memorable tournament, Yerry earned the record for most goals (three) in a single World Cup by a defender.

As a matter of fact, Mina’s eye for goal and defensive attributes earned him praises by plaudits on the world’s biggest stage.

As seen in the video below, our boy scored three times, including a brilliant last-minute header which took Gareth SouthgateQo'shimcha vaqt uchun Angliya.

The Spanish giant triggered his transfer and placed a €100m release clause on his name.

Top menejerlar orasida Joze Mourino became keener to sign him. However, it was the frustration of not getting Mina that led to a breakdown of trust between United’s board and the manager, which resulted in his sack. 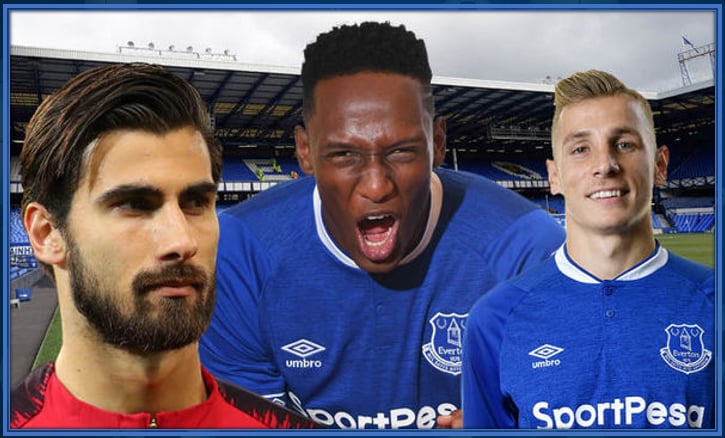 Since Yerry Mina’s 2018 World Cup glory days, we know the archetypal Columbian as someone who keeps paying his dues in the game. Yes, Everton fans can testify that their 6ft 5in colossus owns the heart of their defense.

Truly, Yerry Mina’s bullet heading, strength, and standing tackles are second to none. Without a doubt, his 2018 World Cup success story will forever live in his heart. The rest, as Lifebogger says of his Bio, is history.

The defender’s achievement is made possible by the support of his female partner. Geraldine Molina has stood by her man through thick and thin.

Indeed, by just taking a glimpse of Yerry and his stunning brunette, you can tell they very compatible.

First thing first, she was born on the 3rd day of May 1995. This implies a year younger than her husband.

According to several blogs, the Columbian WAG and her family hails from Guachené, which is the same hometown as her spouse.

Yerry Mina has known Geraldine right from their teenage years. Both met at a time he achieved nothing in football.

Out of love and trust, they began loving each other – since Yerry’s time with Deportivo Pasto.

For all the years in her relationship, Geraldine has remained selfless. She goes anywhere football takes her spouse to.

The Everton WAG is the type who provides her husband emotional support, even if it means putting her life on hold.

Yerry Mina regularly posts loved-up pictures of himself and his brunette. Once upon a time, he made a video of when he popped the ultimate question to Geraldine Molina.

Behold, the scene of that unforgettable moment.

Yerry Mina and his wife have remained one of the most established couples among his colleagues in the Columbian squad.

As I write his Bio, both couples have welcomed their first child, a daughter. For the towering defender, Geraldine and Marianela (his Mum) remain the closest to his heart.

Despite his intimidating size of height, and the millions that go into his bank account, the Big man remains the most humble person you can ever meet.

Away from football, Yerry Mina lives a refreshingly humble life in his England home alongside with his partner, Geraldine.

Thanks to his game, the Columbian has forged his own part towards Financial freedom. Despite his huge wages, Mina possesses a thrifty mindset.

He never showcases his wealth to fans. Put simply, the defender remains an antidote to an exotic lifestyle.

Although, he has them a lot. But Mina prefers to keep his cars and other assets private. He only makes public, his sponsorship deals with Auto manufacturing companies.

As an evidence, here is the Columbian posing with two set of cars; a BMW and Fiat Argo – purely for business and marketing purposes.

For the Guachené native, the love for his household is one of his greatest blessings. Here is a piece of video evidence.

Truly, no amount of football money can take the place of time Yerry spends with his nuclear family. In this section, we will tell you more about his parents, brother, and relatives.

José Eulises Mina had his first-born child when he was relatively young (the early 20s).

Becoming a parent at that early age placed a great deal of responsibility on his young shoulders. For this reason and others, José Eulises family struggled.

The proud father is as humble as his first son. José Eulises manages most of his son’s businesses, including the Yerry Mina Foundation in his Guachené hometown.

His family made history by having Barcelona hire the first Columbian (his son).

The footballer shared the closest relationship with the first woman of his life.

Since his birth, Marianela’s maternal love for Yerry has been the most powerful, one that has positively influenced her son’s development.

A feeling of motherly fulfillment is the first thing that’ll strike you when you meet Marianela González. Yerry has repeatedly sacrificed himself so he could continually put simply on her face.

Asides from building her a house, Yerry has fulfilled his responsibility of making her part of his personal budget.

At the time of creating Yerry Mina’s Bio, his younger brother features as a forward and winger for the Colombian Under 15 team.

At the age of 14, many know Juan José to exhibit the same traits as his big brother. For example, he gets a similar hairstyle like Yerry, walks like Yerry, talks like Yerry, and even dances Yerry’s Mina’s goal celebrations.

As of 2021, Juan José features for Deportivo Cali’s youth.

The 6 foot 5 beast does drills that suites his bodytype every day of the week. Yerry exercises even on days when he has no training. Here is his workout video.

kabi Rikardo Kaka, the Guachené native is a devout Christian. Yerry is an active member of neo-Pentecostal’s CGMJCI.

This acronym stands for Church of God Ministry of Jesus Christ International. As expected by his religion, Mina shows publicly his devotion to Christ, even on the pitch.

Churches often invite the Big defender as a guest speaker to their events. There Mina talks about his life, faith, and commitment to God.

Yerry is quite a traditional man. As tradition expects, he entrenches himself to his family’s aged long beliefs and practices.

During his Barcelona presentation, the World Cup star adhered to the cultural principles of his origin.

Yerry Mina’s profile (FIFA) as of 2021 doesn’t tally with what he gives on the pitch.

A score of 79 and 81 potential seems unfair for a man labeled as the highest-scoring defender in the World cup match. Not to forget, he had a good 2020 with Everton.

Yerry Mina’s humility is rare, both in his personal life and occupation. He is someone who has gotten the admiration of fans. Since child, Mina has always been diligent with everything – from family, religion, education, and career.

It behoves Lifebogger to appreciate his parents (Marianela González and José Eulises Mina) for instilling in him, great moral values which have made Yerry become great. More so, his Uncle (Jair Mina) helped built his footballing foundation.

The Biography of Yerry Mina teaches us one thing. That if you are born in a poor family, it is not your fault.

However, if you refuse to be consistent in working hard, therefore remaining poor, then the fault is yours. Yerri Minaning "Everton" bilan bo'lgan yozuvlari is proof of this consistency.