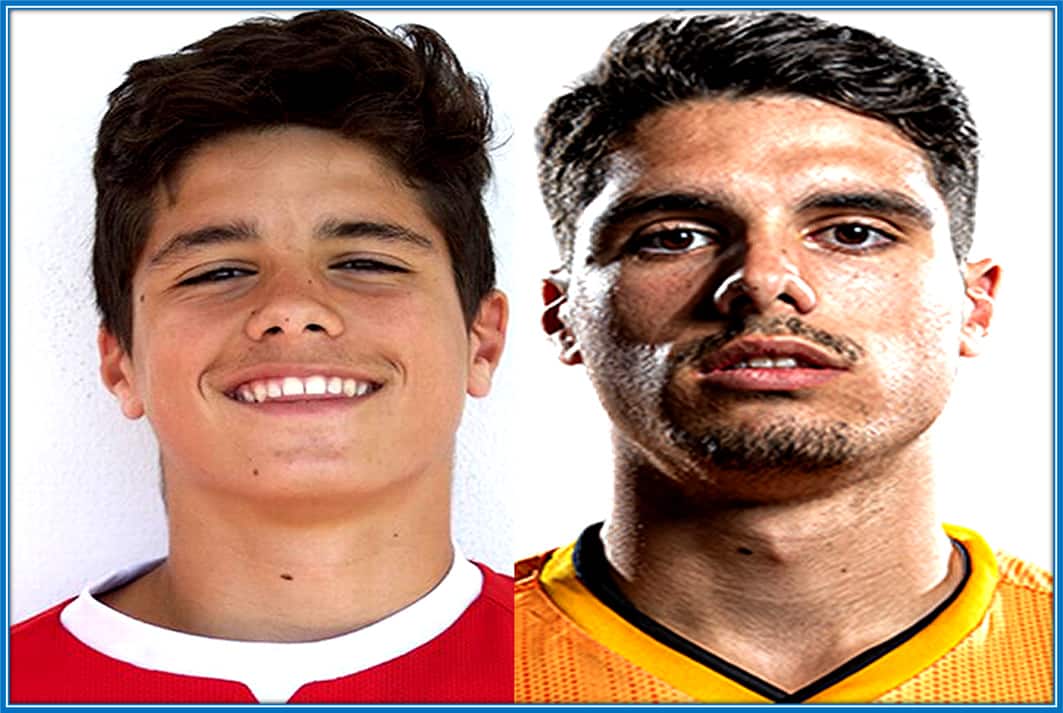 To meet your chronicling needs, we’ve gone deeper to breakdown his personal life, starting from his early days to when he became famous. Pictured below is Pedro Neto’s Early Life and Rise.

Yes, you and I consider him among Portugal’s brightest football talents. As you have probably seen him play, he has got an incredible pace which makes him manipulate the ball really well.

Despite the accolades, we’re sure only a few have taken time to read Pedro Neto’s Biography. We prepared it specially for you and without further ado, let’s begin.

Sporting life for the Speed Star didn’t begin with football. Early on, Pedro Neto was more in love with roller hockey all thanks to his dad who was a professional in the game. While he was still a little boy, he alternated between roller hockey and football.

Early on as a child, one of Pedro Neto’s family members (extended) had a significant influence in his future. That person is other than his uncle, Sérgio Lomba (from his mother’s side). Back then, the retired footballer advised the youngster to join him in the footballing trade which did gladly.

Still at 13, little Neto had a successful trial with S.C. Braga’s academy, a famous sports team situated near his family home. Because Neto was that good, the youngster got a call to finalise his youth experience with Italy’s SS Lazio. There, he graduated with flying colours.

Coming back home after academy graduation, Neto quickly jumped into the spotlight by scoring in his first Primeira Liga appearance with S.C. Braga. This feat saw him becoming the club’s youngest ever goalscorer. Early success didn’t end there, top clubs like FC Barcelona and Man United came begging for his signature.

Did you know?… Pedro Neto’s parents had to visit FC Barca’s La Masia academy and United ahead of a potential move for their son. S.C. Braga President had to convince the youngster’s family on the idea of pedro not taking the big club route instead, continuing with SC Braga. In his words via Portuguese website, Desporto-Sapo;

Braga President’s advise was gladly received and Pedro, instead of going to FC Barcelona decided to take a loan move to SS Lazio where he helped them win a notable trophy.

Judging the way his we’ve portrayed his Bio so far, it appears Pedro is well advised by his dad, mum twin sisters and uncle on the need to keep his private life away from fans. Nevertheless, we believe time will surely come for him to publicly declare his love for a lady. Tetep tenang Pedro!

Soccer players, like many of us, love their pets and Pedro Neto isn’t an exception. Even thou the fact exists that ‘teu aya kasatiaan dina kaulinan modéren‘, it surely doesn’t take into consideration, the love shared between Neto and his dog.

Here, we’ll tell you how he spends his monies off-the-pitch. This will reveal some insight into his lifestyle.

As a celebrity, Pedro knows he is constantly in the spotlight. Pictured below, you’ll agree with me that the footballer does know how to spend his monies on the right type of vacations and workout routine.

At the end of the year, the footballer pockets around 1.5 million pounds, as revealed in his Wolves 2020 salary stats. Judging by this, Pundits has estimated Pedro Neto’s net worth to be around 8.5 Million Euros or 7.6 Million Pounds.

No doubt, he is a very humble guy. Neto’s 29,000 pounds per week is more than enough to buy him the kind of car you see below. The Player is compempted in driving an average car.

One habit of a successful Household is the support for each other especially at the early stages of life. For Neto, family (parents, sisters and uncle) is everything. In this section, we’ll through more light on these persons.

Often known as the Senior of his son’s name, the great dad has supported his son in every step of the way. As an ex-hockey player, Pedro Neto Senior led the way by getting his son fall in love with sports. The choice to leaving hockey for football was well approved by him. Today the head of the home is the proudest and Pedro his son has shown that he is grateful to him.

Without her, a football career may not have been possible for her son. This is because Cristina Neto Lomba is the link to the Neto’s family football lineage. Report from research carried out indicate she was born in Mozambique, a country in East Africa.

Born on the 11th day of August 1973, he is known by the names Sérgio Miguel Lopes Lomba da Costa. Pedro Neto’s uncle is a Mozambican retired footballer who played as a defender in his active days. We credit him for helping Pedro fall in love with football.

kanyataan #1 – Earnings Per Second and Salary relation to the average Portuguese Citizen:

The Portuguese Player before the start of the 2020/2020 season has only gotten a single body ink. Truth is, Pedro Neto’s tattoo still remains a mystery to fans. It might either denote something he cherishes or someone he loves- maybe his parents, sister, uncle, girlfriend etc.

kawas Florentino Luis, Pedro Neto is very underrated and FIFA lovers are not happy about it. Being of the best in his age bracket, he doesn’t get enough credit compared to the likes of João Felix.

The Speed Dribbler was born in a Christian home and his parents adhere to the practice of making their children bear Biblical names. Did you know?… Pedro is is a Galician name for Peter. The name was derived from the Greek word “η πέτρα” which means “stone or rock”.

To get a quick glimpse, we’ve gone ahead to summarize Pedro Neto’s Profile kana méja.

We’ve brought to an end, an enchanting biography of a future football star in the making. Both of Pedro Neto’s parents did well by adhering to the advise by SC Braga’s President which finally paid off.

Pedro Neto’s Bio teaches us the need to take action whenever we feel it is time to act.  Abandoning his dad’s trade of hockey to pursue his dream sports- football surely paid off. Thanks to his Uncle (Lomba) and parental support, Pedro Neto has made every moment count. Kindly tell us what you think about him in our comment section.