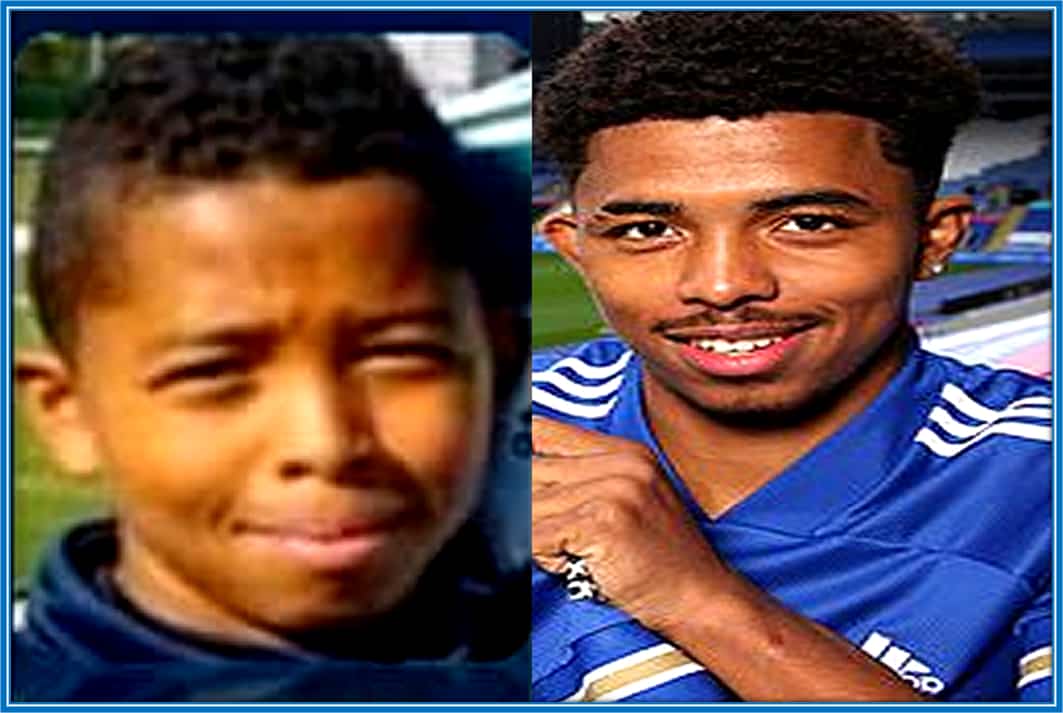 Our Wesley Fofana Biography tells you Facts on his Childhood Story, Early Life, Parents, Family, Girlfriend/Wife to be, Net Worth, Lifestyle and Personal Life.

In a nutshell, we have here, a complete presentation of his life story. We begin from his early days to when he became famous. To whet your appetite, here is a pictorial summary of his Wesley Fofana’s Bio.

Yes, everyone knows of his intuitive reading of the game and ability to predict the runs of opposing forwards. However, only a few people have read the story of his beginnings. Now without further ado, let’s begin.

For biography starters, he bears the nickname ‘The Rock.‘ Wesley Fofana was born on the 17th day of December 2000 in the city of Marseille, southeastern France. The French Footballer came to the world as the 4th child out of 6 children, born of the union between his parents.

Did you know that our boy grew up in his birth city as a fan of Marseille? The southern port city is home to Stade Velodrome and kids who grow up there are just one kick away from becoming soccer enthusiasts.

Now for some spoiler alert, the defender’s childhood story and rise to prominence are devoid of rag to riches tales. Hence, Wesley Fofana’s family were at worst – middle-class citizens. From the onset, Fofana has always been into football for sheer passion and not financial gains.

‘The Rock’ is a French national, no dispute about that. However, a selected population in West Africa, particularly those who live in Ivory Coast, are warming up to the fact that he is one of theirs. Yes, you read that right, one or both of Wesley Fofana’s parents have Ivorian family roots. Therefore, he is a Marseille native with African roots.

Also to note, some members of his family have Malian heritage as his вики page has recently confirmed.

Speak of how the Frenchman began his journey in football, he was only 6 years old when he started playing competitive soccer with lower leagues sides. They include Repos Vitrolles, Bassin Minier, Pennes Mirabeau and Bel Air (in that order). Behold a rare childhood photo of the defender during his early days in competitive soccer. 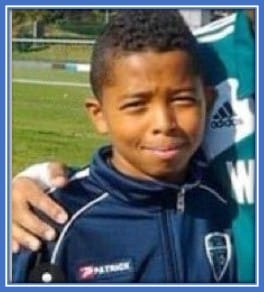 It is interesting to note that the Marseille-born soccer genius cherishes his time at Bel Air above all other clubs that he had his early career with. According to him:

“My initial playing position at Bel Air was a forward role. While I was at it, they likened me to Дидиер Дрогба because of the position, my Ivorian family origins and long hair.

The club is very popular with youngsters.This gave me the best memories of my early years in football.”

When the budding defender became a part of Saint-Étienne’s youth system in 2015, he had hopes that the club would help him rise to stardom. 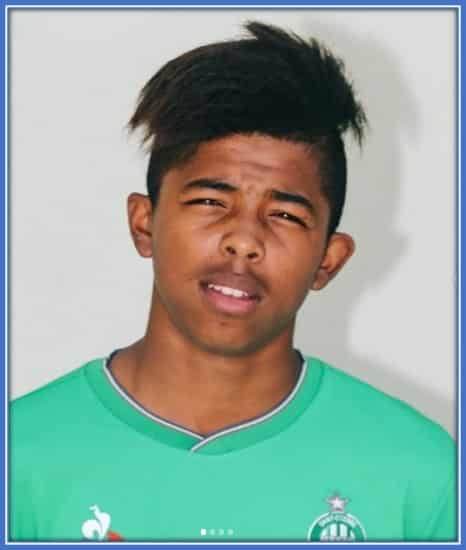 In April 2020, the 19-year-old happily signed a contract extension with the club that will see him remain with them in 2024. Wesley’s family celebrated the move. However, events of the ensuing months made him doubt if he would stay at the Ligue one club till 2024. In his words;

“Fans went abusive, calling me many unprintable names including “traitor” and “mercenary” because of reports linking me to a transfer to Leicester City.

It was even disgusting that they also rained insults on my father, mother and sister,” he told newsmen.

The Marseille native’s resentment with the greens made him embrace a move to King Power Stadium where he expected to strengthen Leicester City’s defence that became weak since the exit of Харри Магуире.

At lifebogger, we understand that Fofana’s foray in the Premier League is an excellent step in the right direction. He is young ambitious and has a lot to prove. While we wish him well in his endeavours. Again, it behoves us to borrow the words of Chris Morgan in Shawshank Redemption that:

“One cannot put some birds in cages. Their feathers are just too bright. And when they fly away, the part of you that knows it was a sin to lock them up rejoices.”

Showing West Ham what they are missing in his October 2020 display against Arsenal, Fofana needs all the playtime he can get. Thus, Brendan Rogers should dispel any thoughts of making the youngster warm benches because it will not be in the best interests of the Foxes.

Who is Wesley Fofana Girlfriend?

The Premier league loves French talents, no doubts about that. In the same way, followers of the league have made a career out of discovering the girlfriend or wags of footballers who ply their trade in English football.

Thus, it is not surprising that the “wag-hunt” to discover Wesley Fofana’s girlfriend has begun. At 19 years of age, Fofana has no girlfriend like his former Saint Etienne teammate Виллиам Салиба. He is rather interested in securing a spot for himself at Leicester as a decade of top-flight soccer smiles upon him.

Every football genius has a special set of people whom they wig out, stick out, bug out, pop out, hop out, ball out and show out. This comes regardless of differences between them, ups or down, right or wrong. They are family! Here, we bring you facts about Wesley Fofana parent and siblings. Also, we will outline facts about his siblings and relatives.

The defender is yet to fully unravel his mum and dad. However, he has down well to give us a glimpse into the support he gets from them by revealing that they are happy with the decisions he takes for career advancement and mental health. Keep your fingers crossed as we are getting close to discovering Wesley Fofana’s parents with each passing interview that he grants.

About Wesley Fofana Siblings and Relatives:

Like we earlier mentioned, Fofana is the 4th out of 6 children born to his mom and dad. There are no nominal mentions of who the siblings are yet. Similarly, records of his ancestry are non-existent on the cyberspace. Especially those of his maternal and paternal grandparents. Neither has he revealed who his uncles, aunts, nieces and nephews are.

There’s more to ‘The rock’ than frustrating strikers and being domineering in Aerial duels. Outside the sport, he strikes people as a merry go lucky chappy with the perfect smile for each occasion.

His life is not devoid of the fun that soccer stars avail themselves of during vacations. In addition, Fofana’s love for taking photos close to pools. It suggests that he has a thing for pool parties. Finally, he loves playing video games when indoors, among other activities that make up his interest and hobbies.

Moving on to the factual discussion of how “the rock” makes and spends his money, the French man is undeniably swimming in wealth. Although Fofana’s net worth is under review at the time of writing this bio – probably around a million pounds. We understand that his annual salary at Saint Etienne coupled with endorsements and sponsorship can make him live a luxurious lifestyle.

With his recent move to Premier League, fans can only imagine how many times his earnings have increased. Has it doubled, tripled, or quadrupled? Would Fofana still be cruising in the fancy car he rides in France?

Also, how much expensive is the house/apartment he’s now living at in England compared to the former? Time shall tell. One thing is for sure, the Defender sure knows how to dress well plus having the best choice of cars.

To wrap up this informative writeup on the defender’s childhood story and biography, here are Untold truths about him.

Иако, SoFifa (at the time of writing) places his wages at €20K. With this, we’ve gone ahead to compute his earnings per seconds (October 2020 stats).

Since you started viewing Wesley Fofana‘s Bio, this is what he has earned…

We can confidently report that Wesley Fofana believes in the existence of a supreme being. Like Амад Диалло (a fellow brother and footballer from Ivory Coast), he practices Islam. Forfana has once taken to his Instagram handle to wish his Muslim brethren “EID Mubarak”.

There a few things Fofana is not proud of in football. One of them is his current FIFA rating. His card sports an overall rating of 71 points, two points below Акел Туанзебе.

This makes many wonder why Leicester fought hard to win him over. Similar to Ryan Brewster, we bet that the defender will pretend not to acknowledge the existence of such rating until it gets to 80 and above.

Fofana’s nickname is “the rock”.  It was French media L’Equipe that gave him the nick in recognition of his superb ability to resist pressure, leaving the opposition with no way through.

Thanks for reading this engaging but factual piece on Wesley Fofana childhood story and biography. Without much doubt, Leicester city signing of the St Etienne Defender will surely to pay off.

We hope this Bio of Wesley Fofana has inspired you to always walk away from events and situations capable of affecting your mental health and happiness. Fofana exemplified that by plotting his move from Saint Etienne after fans became disrespectful to him and his family.

We must now commend Wesley Fofana’s parents and family for encouraging him to make the right decisions for their collective wellbeing and happiness. At lifebogger, we take pleasure and pride in delivering childhood stories and biographies facts of football stars in the most interesting, fair and balanced manner.

Have you seen anything that doesn’t look right in this write-up? Please leave a comment below or contact us. Otherwise, tell us what you think about the footballer in the comment section.