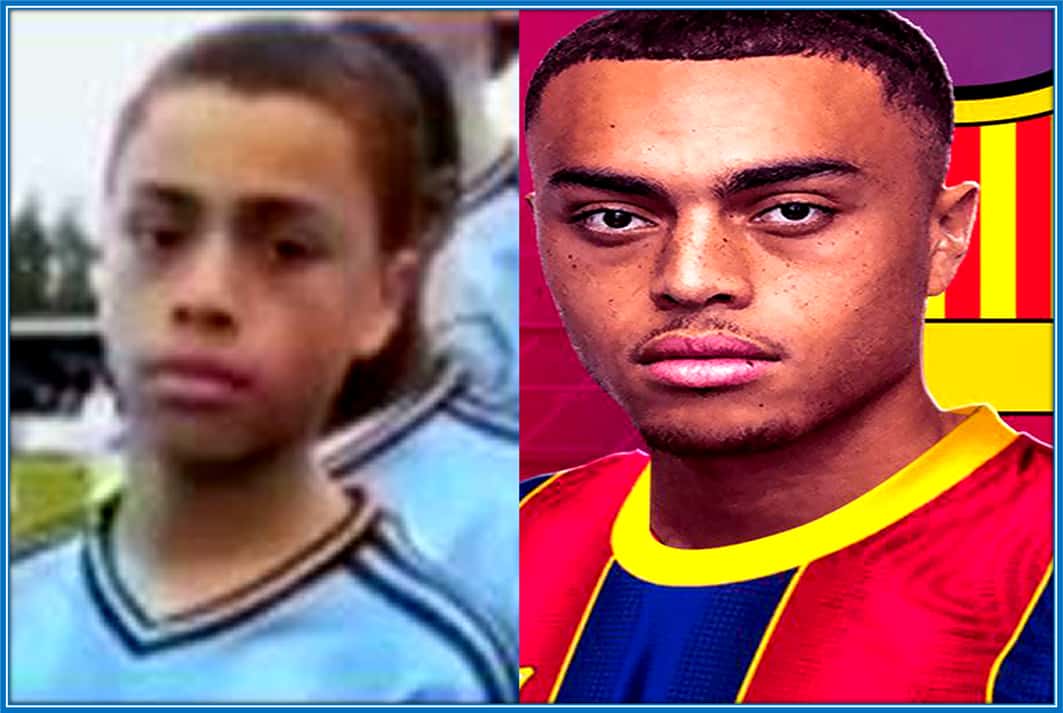 Simply put, we present you with a complete Life Story of Sergino Dest from his early days to when he became famous.

Before that, behold a brief picture summary of his Biography in pictures.

Yes, we all know that Barcelona does not seal a contract deal with an average player.

It, therefore, means that Sergino Dest must be loaded with a lot of football potential to have attracted the attention of Ronald Koman. Sadly, many football fans do not know of his Life Story, which is quite interesting. So, without further ado, let’s begin.

For starters, Sergino Gianni Dest was born on the 3rd day of November 2000 to a Surinamese-American father and Dutch mother in Almere, Netherlands.

According to research, he is the only child born of the union between his parents.

Back in the days, little Sergino had always been interested in playing football. Growing up with his peers on the streets of Almere, the young lad spent lots of his spare time playing street soccer.

Like his fellow countryman Matthijs de Ligt, young Sergino (pictured below) was a die-hard Ajax fan in his earliest days. 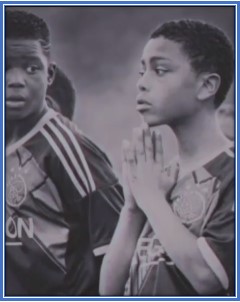 The earliest days of the young lad was graced with all the toys he needed for his daily life. Thankfully, Sergino’s parents had an outstanding job.

With his father working with America’s states service, Sergino had most of his desires for football gadgets fulfilled.

A look into his ancestry shows that the prolific defender has a multiracial ethnicity. Truth be told, Sergino Dest Family Origin comprises Surinamese (similar to Tyrell Malacia) and Dutch Family Roots.

Moreso, he holds dual citizenship because his parents are of two distinct races. However, he has only represented the US in major football tournaments.

Notwithstanding, the Netherland has also made exciting offers to bring him into their national team because of his Dutch heritage.

Like we earlier mentioned, young Sergino had always fixed his mind on playing professional football as his life career. Interestingly, he ventured into the game of soccer at the tender age of 9.

In an attempt to help Sergino delve into the paths of his dream, his parents enrolled him at Almere City Academy in 2009.

Back then, the right-footed player trained hard for three years before joining Ajax youth Academy in 2012. 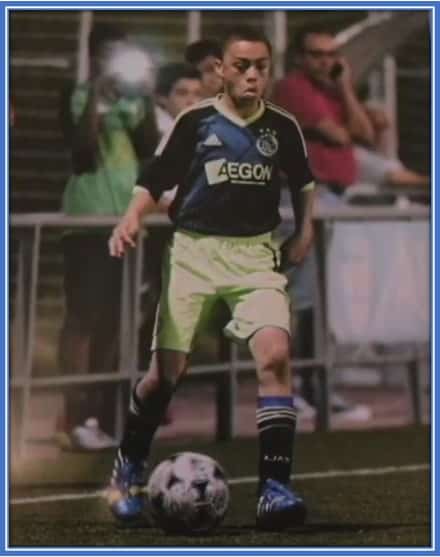 Joining Ajax youth academy gave the novice player enough time to improve his skills and amass a proper understanding of football rules. Do you know?… Sergino Dest started up his career as a full-time striker.

However, he soon realized that he would be better at playing from the rare rather than the frontline. Hence, he switched to fullback and continued developing his football prowess.

Little by little, Sergino recorded an excellent improvement in his game-play and helped his academy win many unmentioned trophies shown below.

It took Dest six years of training and commitment before he finally got the privilege to play professional club football.

As a matter of fact, Sergino Dest made his professional debut for Jong Ajax (Ajax reserved team) on the 15th day of October 2018.

Interestingly, the American-Dutch player made five appearances for the US U-17 team before playing for his club.

After displaying a handful of exceptional football talent in the 2017 FIFA U-17 World Cup, the right-footed defender got promoted to Ajax’s senior team.

Thus, he made his debut for the senior team of Ajax in July 2019. Also to note, Sergino Dest alongside Ricardo Pepi, Christian Pulisic, Brenden Aaronson, Tim Weah, Giovanni Reyna, etc, have helped the US to the 2022 FIFA World Cup in Qatar. 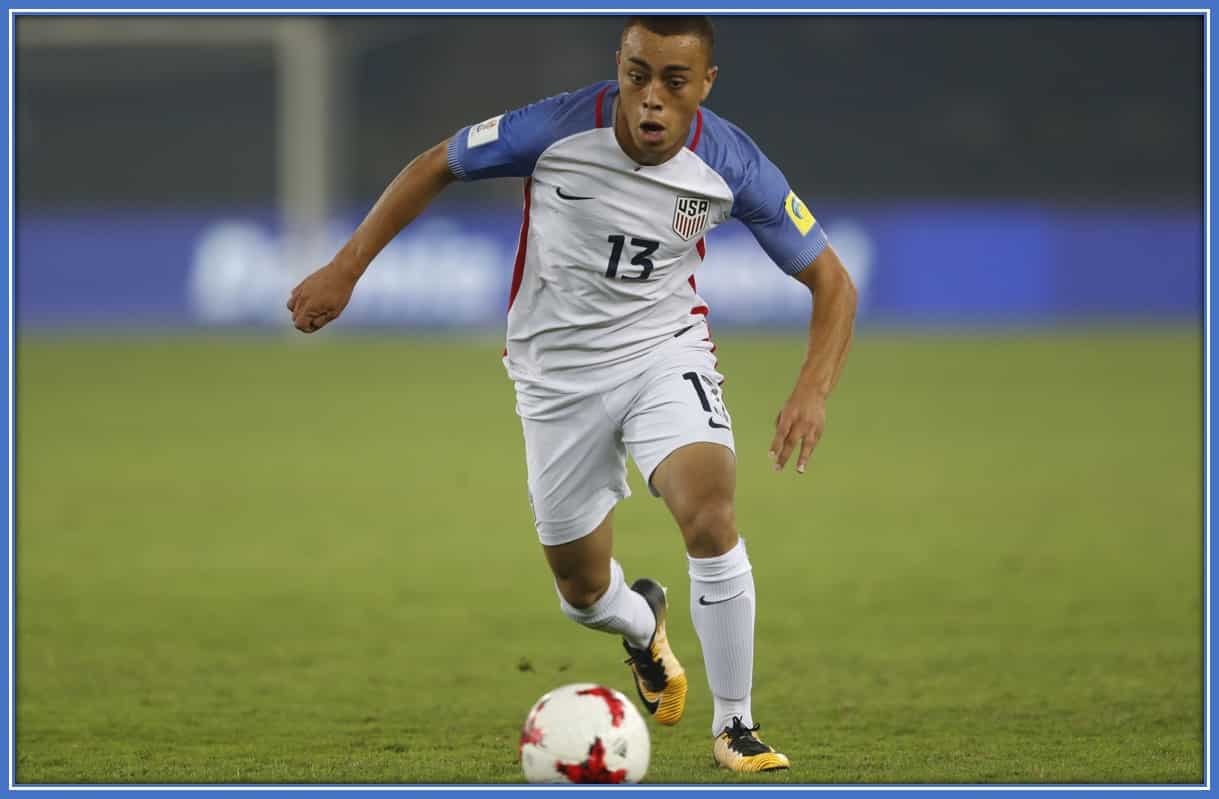 Playing alongside prolific players like Donny Van-der-Beek‏ gave Sergino Dest a lot of confidence to impress his fans.

By the end of his first senior season, the young talented player had made 35 appearances and scored two goals for Ajax under the commands of Erik ten Hag. Hence, he received the AFC Ajax Talent of the Year Award in 2020.

Fast forward to the time of writing this Bio, Dest has sealed a transfer agreement with Barcelona in October 2020.

What’s more? Many football lovers are bewildered by his contract terms, which comprises a total of €26 million fees and €400 million buyout clause. 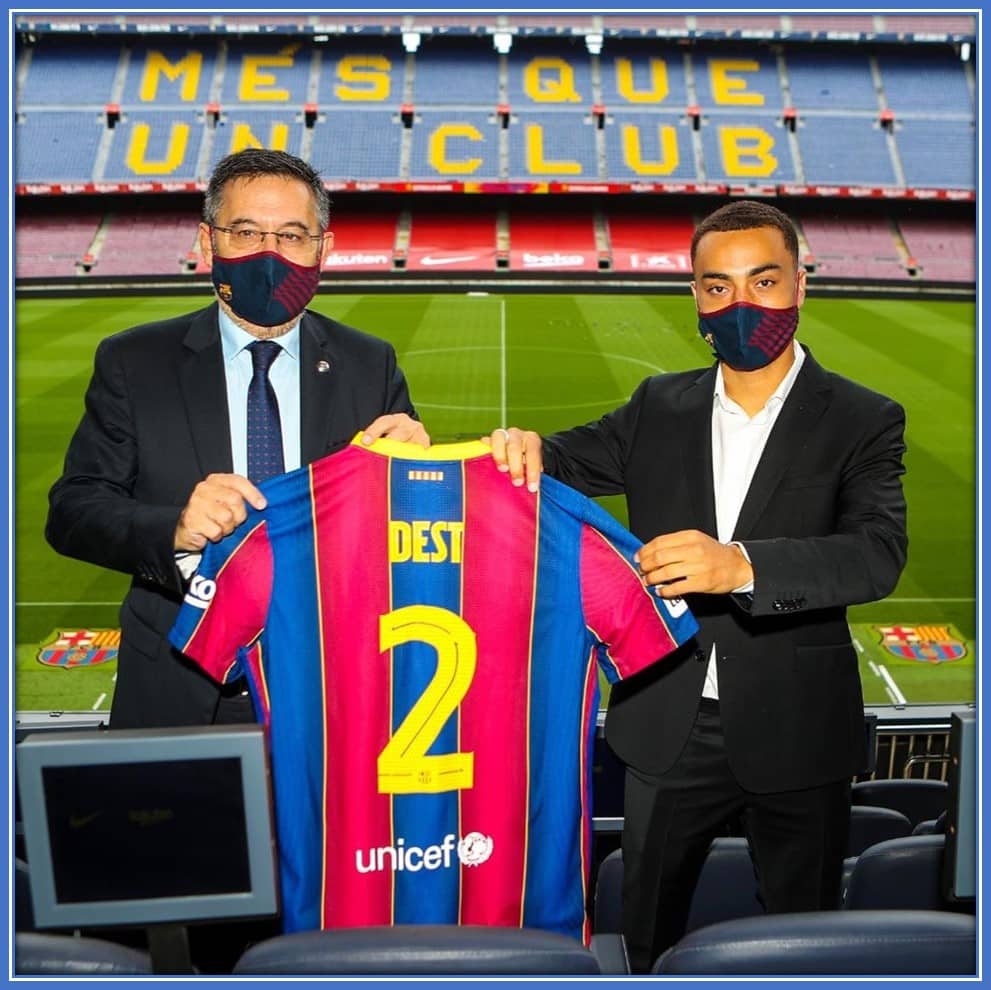 Well, everyone is patiently waiting to watch Sergino Dest fulfil his end of the bargain by establishing himself as one of the Best Football Youngsters of the 2020s. The rest, as they say, is history.

Below is a composition of his farewell to Ajax and a video clip that shows why every club wanted him on their team;

“Just a boy from Almere Stad who grew up with a dream of playing for Ajax.

I am blessed to have represented this club for the last nine years.

Thank you to everyone at Ajax, and a special mention to the fans, you will always hold a special place in my heart. Now on to a new challenge.”

Who is Sergino Dest Girlfriend?

First and foremost, we can’t deny the fact that his good looks wouldn’t attract female fans. Not to talk about those who have fantasized about being his future wife in their minds. 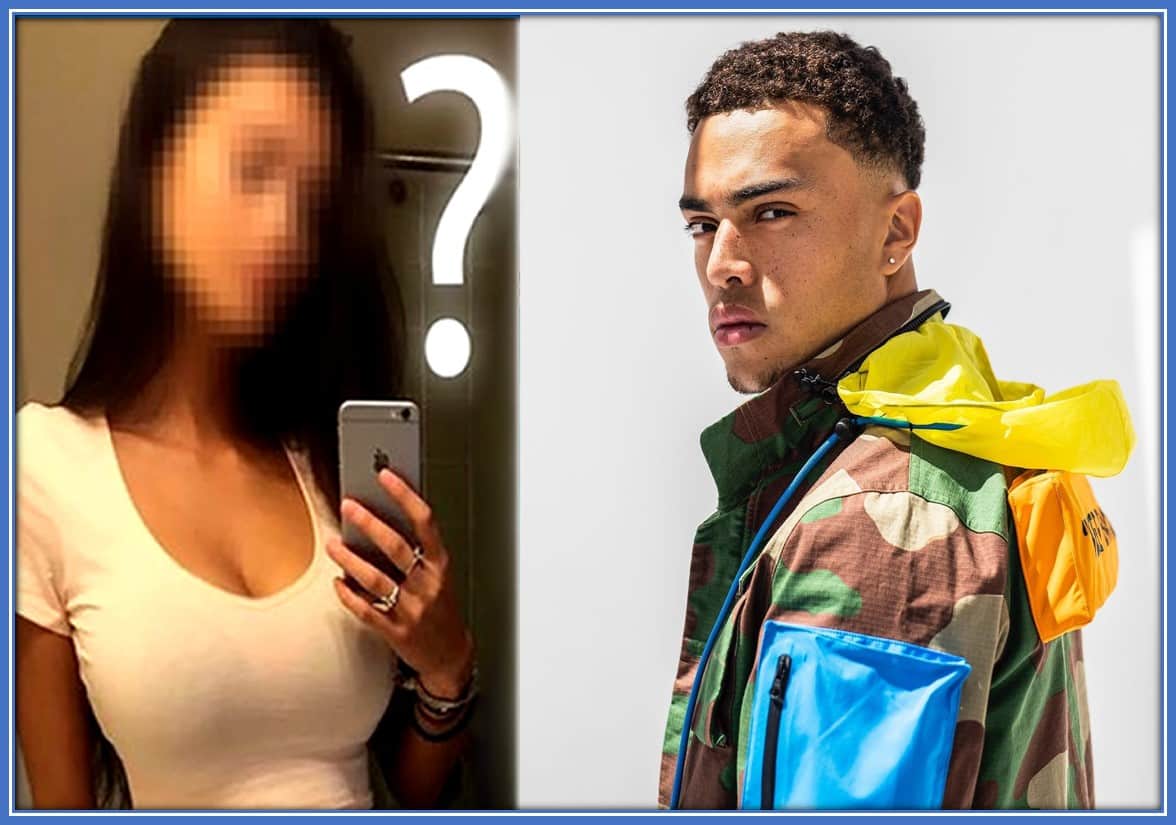 However, the young Barcelona player has focused more of his energy on his primary goal – football.

Sorry to break it to you, Sergino Dest has no interest in getting into a relationship commitment at the time of writing his Life Story. Therefore, he has no girlfriend at the moment.

We find it interesting that the Scorpio-born footballer has exhibited the characteristics of his zodiac trait.

His determination, bravery, and honesty are likely one of the basic secrets to his career achievements.

Moreover, the personality of Sergino Dest seems like a vessel filled with so much positivity. Hence, the Dutch footballer is often optimistic and has a wonderful sense of humour.

In one of Dest’s visits to some children (pictured below), he spoke about his personality. Here is what he said;

“I’m happy that I got to share my message with the children today. I love to inspire young people with positivity. Thank you for welcoming me today!” 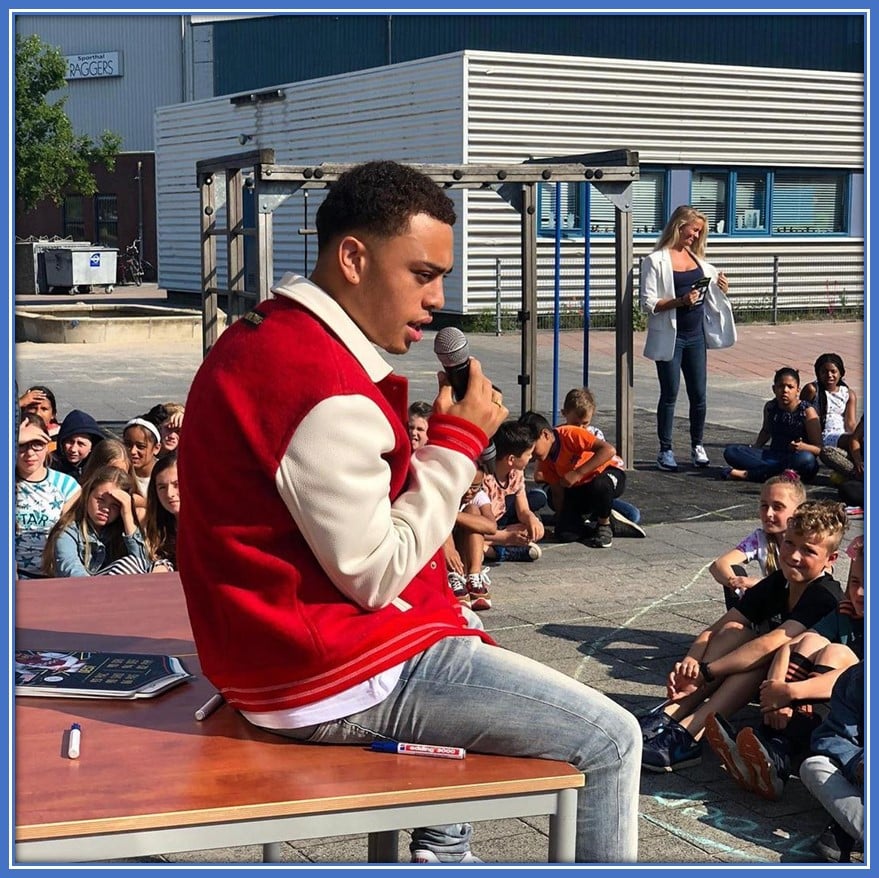 After going through a great deal of stress on the training ground, the exceptional wing-back usually takes his time to relax.

On most occasions, Dest takes a stroll across beautiful paths to release exhaustion. On the other hand, he sometimes goes on vacation just to get a better feeling of a new environment.

We can’t help but applaud the fact that Sergino Dest does not deny himself the luxurious assets he needs for his daily life.

As a part of his wealth, the Dutch footballer has an A-Class Merc car, which has undergone remodelling. Moreso, there is every possibility that he owns an expensive house that remains undisclosed to the public. 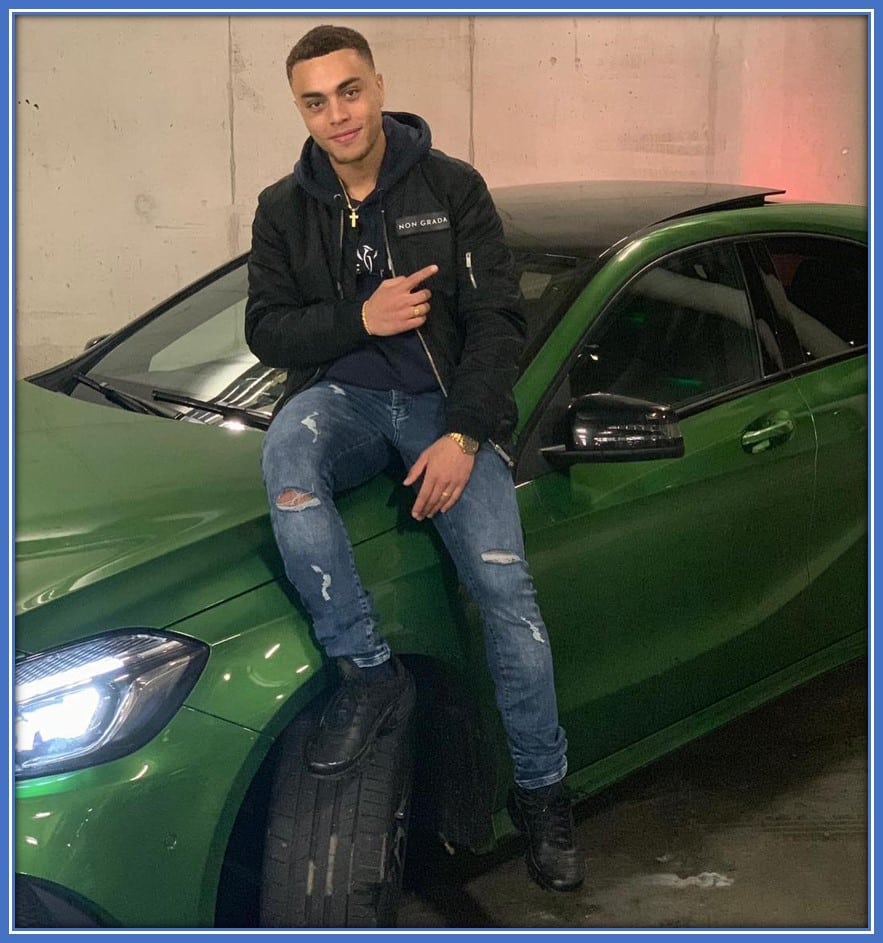 At the time of writing this Biog, the American-Dutch player earns an estimated annual salary of €2.3 million.

Being born into a multiracial family means that the wing-back would have to choose a side to advance his career on a national level.

Guess what? He ended up playing for his fatherland (United States). Now let’s tell you more about Sergino Dest’s parents and family members.

Judging by his early career life, there is a likelihood that the young defender did not spend enough time with his dad.

However, it is all thanks to his father’s heritage that he could join the US national team to advance his career. Less I forget, Sergino Dest’s dad is an American citizen who works as a Serviceman for the states.

“Each time I got to the last round of Netherlands youth team selection and didn’t make it.

I was like… But my father reminded me of having an American passport.”

There is no denying the fact that Dest’s mom has played an integral role in the success of the promising player. Truth be told, she always encouraged her son when he began his life-changing career in football.

Do you still recall those moments when you feel you’ve hit rock-bottom?… Of course, everybody usually faces such circumstances once in a while.

In such scenarios, Sergino Dest’s mom always becomes his consolation and the foundation that strengthens his resolve to bounce back to his feet.

Am sure the prolific defender might have felt more blessed if he had a brother or a sister.

Notwithstanding, he has established an intrinsic bond with his teammates and childhood friends that could be considered as another bond of brotherhood.

Unfortunately, Dest has not considered sharing any information about his grandfather and grandmother with the public.

In the same way, he has kept details about his uncles, aunts and other relatives a secret.

To wrap up our Sergino Dest Life Story, here are a few facts about him that would help you get a complete knowledge of his Biography.

The table below gives a detailed analysis of Sergino Dest’s salary since he joined Barcelona.

Who would have imagined that he would be earning a weekly salary that is a bit close to that of Ansu Fati?

We’ve strategically put up an analysis of Sergino Dest’s salary as the clock ticks. Find out for yourself how much he has earned since you came here.

This is what Sergino Dest has earned since you began viewing his Bio.

For those of you that are interested in inking, sorry to disappoint you because Sergino Dest is not your man.

Despite having a great football prowess, the American-Dutch player has frowned against inking tattoos on his body.

Fact #3: Why He Chose the US National Team Over Netherland:

Since his rise to fame, football lovers have always wondered why Dest who grew up in the Netherlands, would play for the US rather than the Dutch team.

“It was indeed a tough decision for me when the dutchmen’s national team showed their interest.

But I have built a wonderful feeling with Team USA over the last couple of years. Hence, I strongly believe in the plans and potential of US Soccer.”

For a player who is sought after by many prestigious clubs, no one would dare doubt his competence.

Moreso, being signed by one of the prestigious football clubs in the world, means that Dest has a great deal of football prowess. FIFA stats reveals he is an attacking full-back that needs to be polished. Not forgetting, he (like Jesus Ferreira) enjoys great movement stats.

The footballer belongs to the Christianity faith. Truth is, he was born a Catholic. Thou his religion is identified, there are no records of him practising it. It appears he does that off social media.

Finally, the Life Story of Sergino Dest shows that we are the architect of our careers. Hence, our success lies in our decisions.

Let’s often give careful thought to life’s challenges to avoid making rash decisions in our ambitions.

Also, we say a big shout-out to our fans who have grown perfectly well without relying on a parent. Our best wishes are with you.

For Dest, his parents stood as the catalyst of his career decision. However, you who do not have a parent manage to somehow find a basis upon which you were strengthened. Kudos to you!

Thanks for reading our Sergino Dest Life Story and Biography Facts. Kindly Contact us if you come across anything that doesn’t seem right with our article, bearing in mind that our team watches out for fairness and accuracy.

Asides from Sergino Dest’s Bio, we have other related USA childhood biography stories for your reading pleasure. The Life History of Gregg Berhalter, Jesus Ferreira, and Weston McKennie will interest you