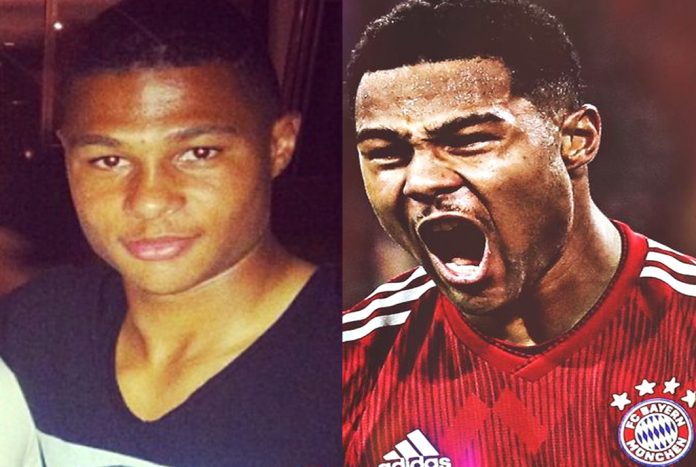 LifeBogger presents the Full Story of a Football Genius best known by the name “Fashion Icon“.

Our Serge Gnabry Childhood Story plus Untold Biography Facts bring you a full account of notable events from his childhood time to date.

Yes, everyone knows about the pace he brings to the game of football. However, not many football fans have read a detailed version of Serge Gnabry’s Biography, which is quite interesting. Now without further ado, let’s Begin.

For starters of his Biography reading, Serge David Gnabry was born on the 14th day of July 1995. Gnabry was born to his mother, Birgit Gnabry and father, Jean-Hermann Gnabry, in Stuttgart, Germany.

Although Serge Gnabry was born in Stuttgart, Southwest German, however, only a few know about his African roots, which is traced to his dad Jean-Hermann.

Jean-Hermann was once a migrant from Ivory Coast who only planned to travel to Germany in other to learn the language.

Serge Gnabry’s Dad had hopes of returning to his native African country and teaching German to others. 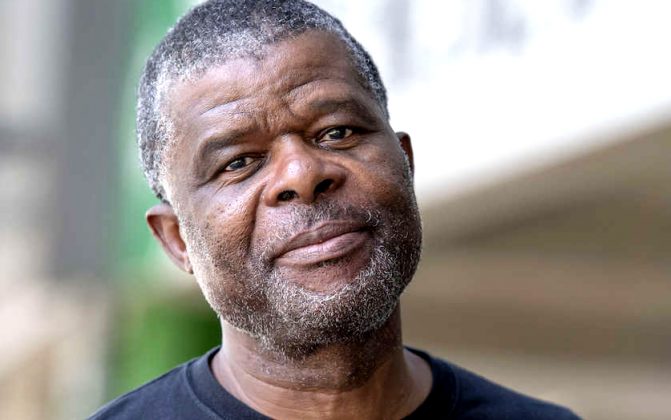 Unfortunately, Jean-Hermann didn’t return back to Ivory Coast. While in Germany, he met and fell in love with Birgit, who later bore their beloved son Serge Gnabry.

Jean-Hermann’s decision to remain in Germany is responsible for making their son’s youth football journey a smooth one.

Serge Gnabry started out in sports, never aspiring to become a footballer. He started out as a talented sprinter who took inspiration from retired Jamaican sprinter and world record holder Usain Bolt. 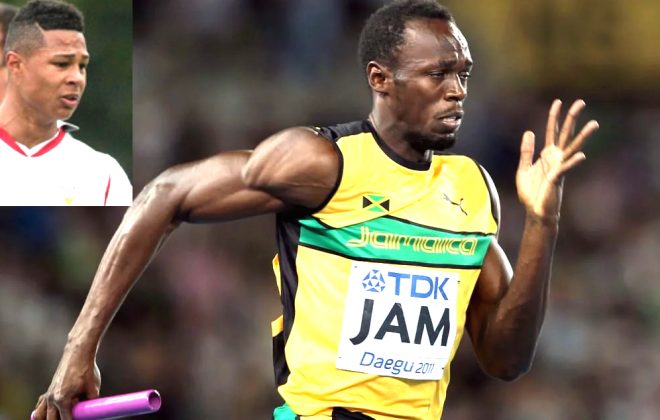 Early on, Serge aspired to rise to national sprinter, which he believed would give him the opportunity to challenge Usain Bolt.

According to reports, the continuous records set by Usain Bolt forced Serge Gnabry to give up sprinting and decided to choose football.

Even after the change of heart, Gnabry’s determination to become a professional footballer wasn’t just a passing fantasy.

Football has accompanied Serge Gnabry since his childhood. At the tender age of four, he successfully enrolled with his local team, TSV Weissach.

Because Serge performed better than the rest of the kids, he changed youth clubs severally until he found a competitive club that would be interested in him.

At age five, he put on the jersey of the TSF Ditzingen. At age 6, he began playing for Hemmingen.

It was at this time an interest came from a big club came. Serge decided to join VfB Stuttgart, where he remained for more years.

Gnabry, at the age of 10, once acted as a fanboy who cheered Mesut Ozil, who was involved in one of the youth tournaments near his hometown.

“Ozil was the best player at the tournament, and I got a picture with him back then” Said Gnabry.

Little did the 10-year-old know he would be teammates and play alongside Mesut Ozil someday at the Emirate. Serge Gnabry’s dreams finally came true. 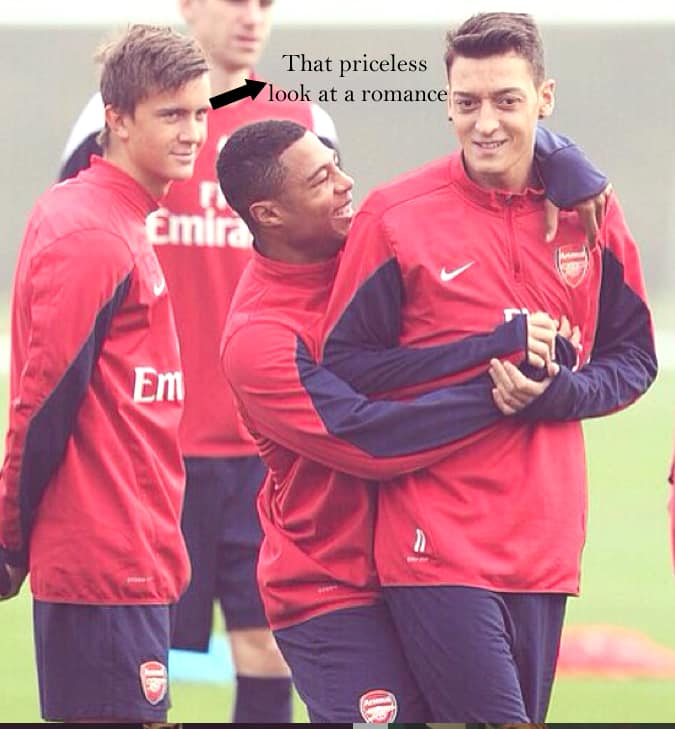 While in VfB Stuttgart, Serge Gnabry continued to press on as determination and self-belief became his watchwords during his youth years. 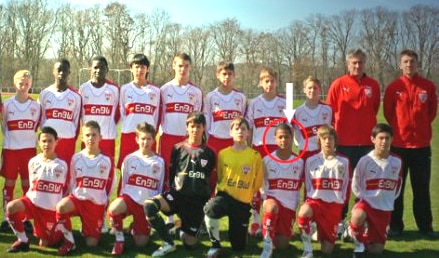 Making his way through the ranks, one English club who loves hunting youth talents noticed him. That was Arsenal!

Serge accepted their deal as he felt the need to continue his football maturation process in London.

In 2010, VfB Stuttgart agreed to sell Gnabry for £100,000 to Premier League side Arsenal. Serge Gnabry, who was excited about meeting Mesut Ozil, ensured that the deal happened quickly. 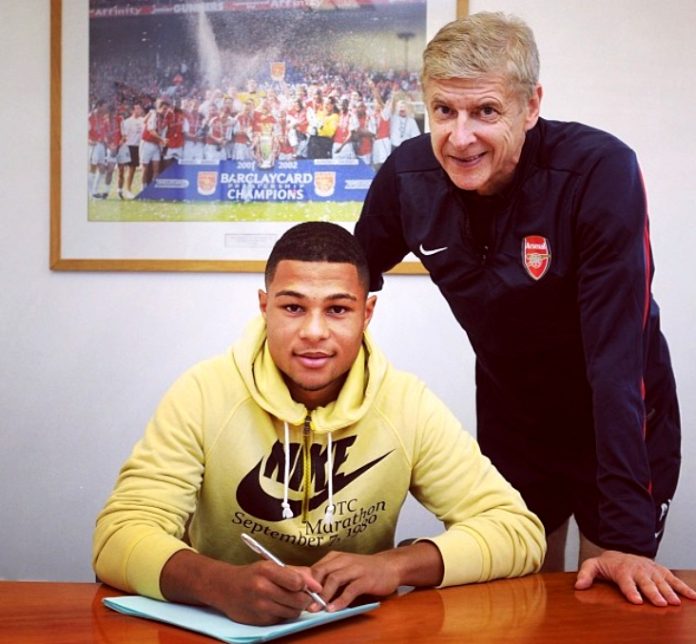 Did you know?… Serge signed for Arsenal even while he was not fit to join them because of his age (he was only 15). Ideally, he signed a year before he was delivered to the North London team

While at Arsenal, Gnabry showed some impressive displays and got himself promoted to the club’s senior side way before his 18th birthday.

At 17 years and 98 days, he became the second-youngest player in the league’s history after Jack Wilshere.

Gnabry’s impressive start to the 2013/2014 season resulted in his nomination for the 2013 Golden Boy Award and a giveaway new five-year contract with Arsenal.

Unfortunately, things didn’t go well in his fight to be on the club’s first-team sheet.

Serge Gnabry in the 2014/2015 season saw him being plagued with serious knee injuries, which resulted in him missing football for over a year.

Rejected by the Premier League – Considered a Surplus:

Upon recovery from his knee injury, Gnabry, who could not meet up with Arsenal’s stiff first-team competition, saw himself being loaned out to West Bromwich Albion. 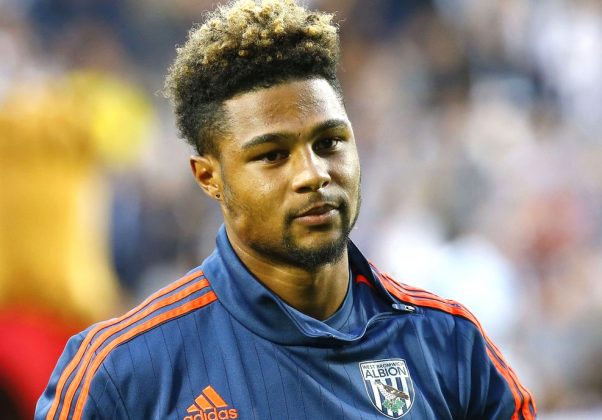 While at WestBrom, Serge Gnabry still struggled and was considered a surplus to the club’s requirement.

At this time, he knew the Premier League wasn’t his calling. Gnabry, upon being recalled from loan, decided to leave for Germany, where he joined Werder Bremen.

At SV Werder Bremen, Gnabry began to see his dreams becoming true. This came when he put his old-fashioned sprinting athletic talent to use.

Gnabry began to stun fans, opposition, and even his fellow teammates with what was termed his “Turbo Speed”. Below is a video of Serge Gnabry surprising his own teammates with his Turbo Speed.

Gnabry cemented his place in the hearts of fans when he performed well for Germany in the 2016 Summer Olympics. It was a tournament that gave his country the silver medal.
Gnabry scored important goals for his country and ended up becoming the joint top scorer with his teammate Nils Peterson.
To cap his international rise, Gnabry in 2017 led his German U21 team to the European Under-21 Championship victory.
That feat became the international springboard, which boosted his confidence as he announced his name to the world.
That same year, precisely on the 2nd of December, Serge Gnabry cemented his fame with a 45 yards screamer lob against Leipzig.
This unbelievable Long-Range Goal is seen in the video below.
This feat gave him the ticket to join Bayern Munich, who acquired him on the 2nd of July 2018, 12 days to his 23rd birthday.
As affirmed by Hector Bellerin and Nacho Monreal, the German who was accused of not being at the level of WestBrom finally proved his doubters wrong. 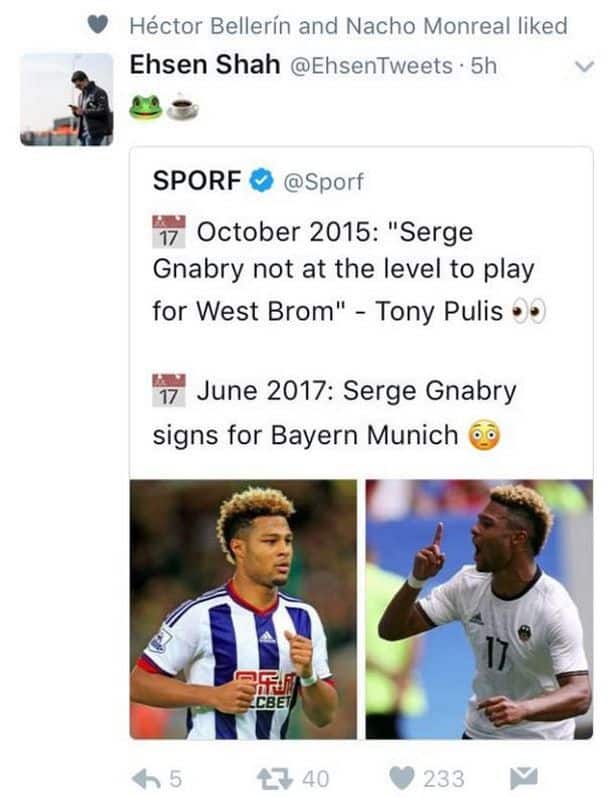 Starting off, Serge Gnabry’s relationship escapes the scrutiny of the public eye simply because his love life is drama-free.

At the time of writing, Serge has is a stunning girlfriend who goes by the name of Sarah Kehrer. Looking at her enamoured beauty, you will realize Sarah is indeed an absolute stunner. 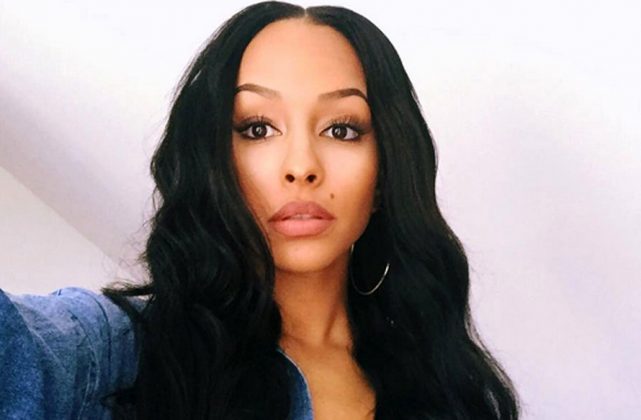 Both Serge and Sarah have been in an open relationship since 2016, during his early days at Werder Bremen. 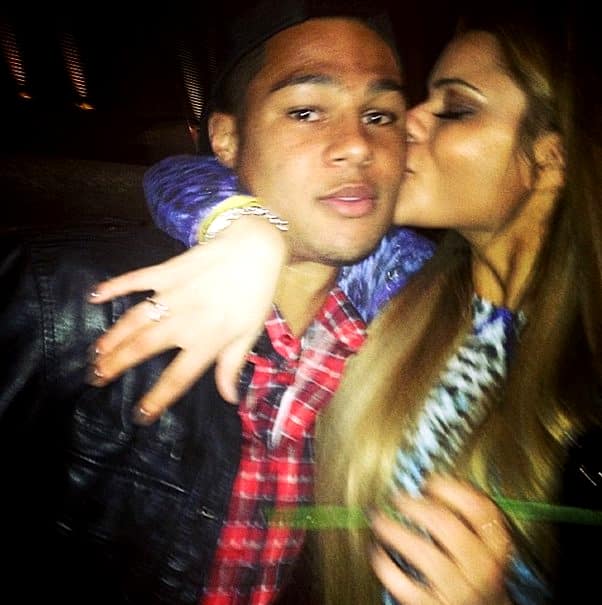 The deep bond and love both have for each other are mostly done privately, as photos are rarely uploaded to their social media accounts.

For some fans, Sarah’s identity remained a mystery as Gnabry has never tagged his BAE in the post. He once uploaded her photo with the caption “She” and a single love heart emoji.

Getting to know Serge Gnabry’s personal life would help you get a complete picture of him. The truth is, Gnabry is a totally down-to-earth person.

He is very emotional and sensitive and cares deeply about people’s pains and sufferings. This is why he, together with fellow stars namely; Mats Hummels, Juan Mata, and Giorgio Chiellini signed up for the Common Goal Initiative. 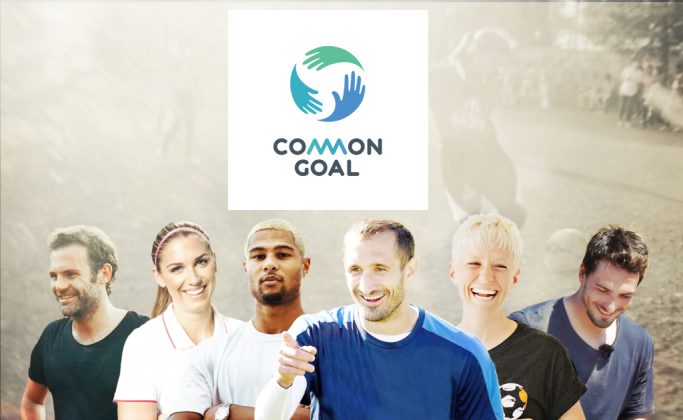 The purpose of the Common Goal initiative is to unite the global football community in tackling the greatest social challenges of our time.

Members of this initiative make the pledge to donate at least one per cent of their wages to a collective fund managed by a non-governmental organization, StreetFootballWorld.

Speaking about his decision to join, Gnabry once said. “I want to make giving back a part of football and help football feel good about itself again. I want to change the game for good.”

Another note on Gnabry’s personal life is his belief in his Christian faith. According to Fupa reports, Serge Gnabry attends a Protestant church and sings for his choir.

Serge Gnabry, in addition to football, loves Basketball and follows the NBA. He is a supporter of the LA Lakers and addicted to the lifestyle of LeBron James. 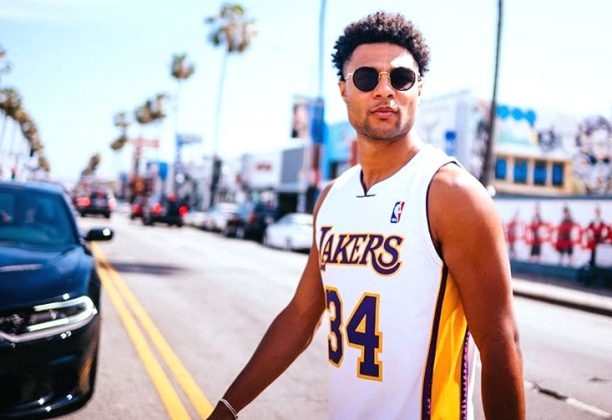 What he does and buys with his Monies:

The truth is, Serge’s life on the pitch isn’t bad off the pitch either. Sometimes, he loves to spend his monies in Dubai during the holidays.

Did you know?… Serge Gnabry is a big fan of the Dubai Quad Biking Tour. Below is a photo of him taking a rest at the Lehbab Desert after a ride across the dunes with his quad bike. 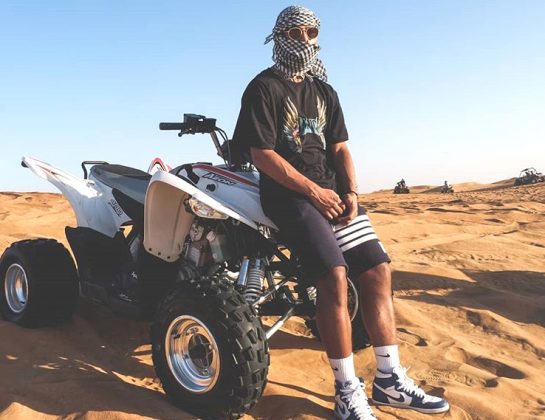 Instead of buying Lamborghinis, Ferraris, or Bentleys, Serge Gnabry sticks to Mercedes. Currently, he is always spotted driving around his flashy Mercedes Benz. 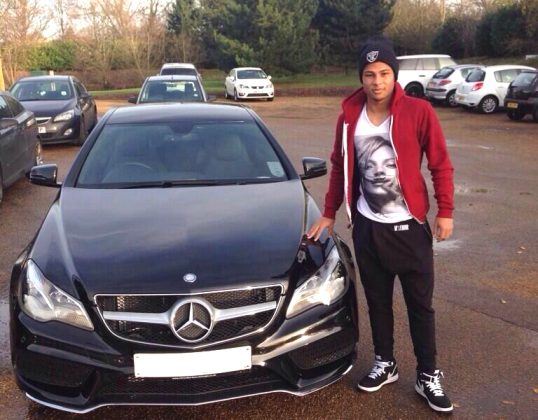 Once upon a time, an online report once stated that Gnabry’s destiny as a professional footballer came because his father Jean-Hermann (pictured below with his son) was an international who played for his native African country Ivory Coast. Or was he? 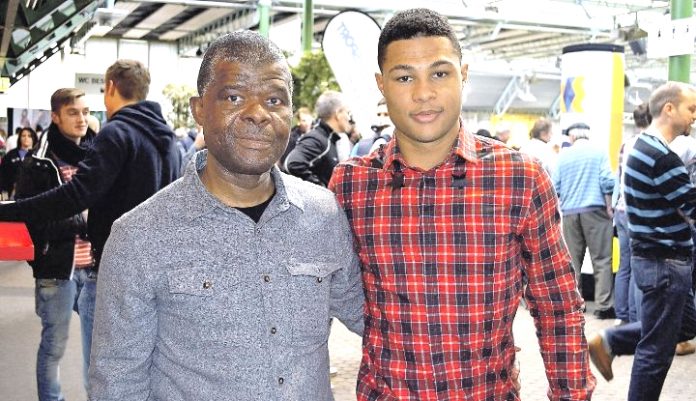 “I don’t know where these rumours about him came from. It’s just a lie: He never played professional football…”

said Serge Gnabry while reacting to the rumour in an interview with Bremen’s club magazine.

We later found the rumour to be false and one of the earliest examples of ‘fake news’ in German football.