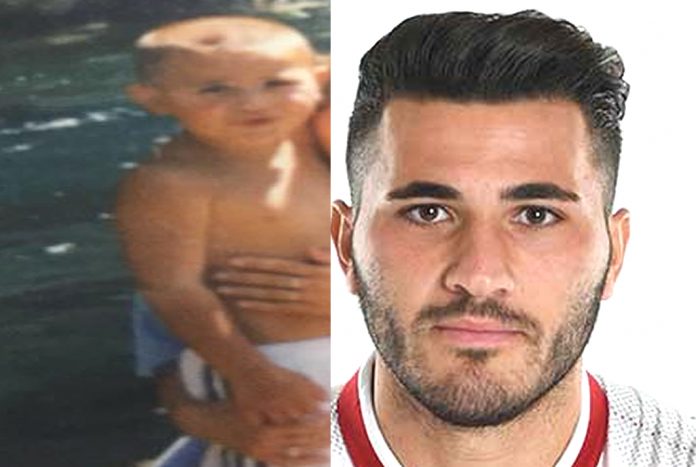 Lifebogger presents the Full Story of a Football Genius who is best known by the nickname “The Tank“.

Our Sead Kolasinac Childhood Story plus Untold Biography Facts bring to you a full account of notable events from his childhood time to date.

Yes, everyone knows he is a tree-like defender who has a no-nonsense and muscular approach to the game.

However, only a few consider Sead Kolasinac’s Biography, which is quite interesting. Now, without further ado, let’s begin.

For Biography starters, Sead Kolasinac was born on the 20th day of June 1993 in Karlsruhe, Germany. He was born to his mother (name unknown) and his father, Faik Kolašinac. Both parents pictured below are Muslims of Bosniak origin.

Back then, while his mum cared for the family with her delicious burek and cabbage rolls, Sead’s dad worked as a factory worker for a German Mercedes Benz factory.

Sead’s Dad Faik, was born in Nikšić, in Montenegro. In 1969, his family moved to Čapljina, a town, and municipality in Bosnia and Herzegovina.

At Capljina, Faik met Sead’s mum, and both fell in love and got married. The ruthless Bosnia War made both his parents migrate to Germany in other to save their lives from oppressors. 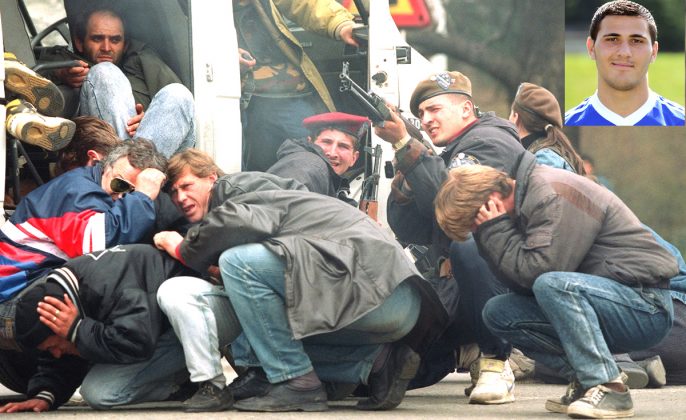 In Germany, their football star son, Sead Kolasinac, was born into a middle-class family they had set up for themselves.

Often, we hear about rags to riches stories in football. These stories talk about how players who come from poor backgrounds later became stars. Sead Kolasinac’s story is no different.

Sead grew up with his sister named, Sabrina Kolasinac. Growing up, Sead was much closer to his mum and had a resemblance to his dad whom he shares a similar muscular frame with.

“It’s all about genetics,” his father once said. Religion had always played a significant part in his upbringing.

As a poor industry factory worker, Faik often remembers how his son would sometimes skip school to go to Islamic classes at the mosque. There were also times Sead would go hungry rather than eat pork meat.

As a child, Sead would spend all of his free time with a ball in the suburbs of Karlsruhe. It was his participation in his school’s competitive football that steered him away from bad choices he could have made as a child.

Looking back, as soon as school finished, we’d go to the local pitch and play until our mothers would drag us away late at night. We had a clay pitch, and then next to that a new astroturf cage was built, so we’d play there too.

said Sead Kolasinac as he once reflected on his early footballing days. Those evenings he spent in the clay pitch and astroturf cage finally paid dividends.

Kolasinac’s passion for the game saw him enrolling into the roster of Karlsruher SC at the age of 8. This academy once boasted of having the likes of Nico Schlotterbeck, the German defensive tower.

Kolasinac’s career foundation was laid by this local club, and Sead made progress through their age groups until he was 16.

In 2009, Kolasinac left Karlsruher SC to join Hoffenheim, where he played for just a season. Despite having a good season, Sead still remained unsettled with the club’s youth setup. 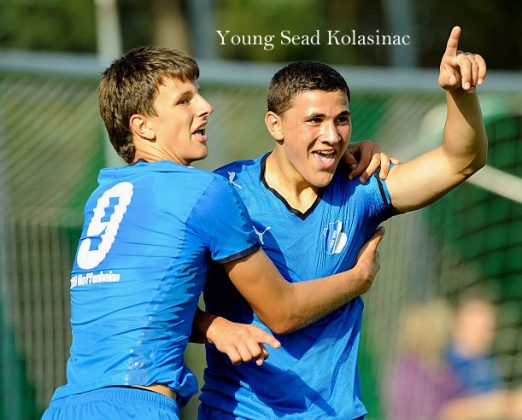 Because he was that good and desperate to succeed, Sead had to seek the best club to help him actualize his dreams of becoming a professional. He once said;

After Hoffenheim, I went to Stuttgart and again things didn’t go that well, but these things happen to young players.

Despite things not working out, Sead just had the luck of passing trials!!.

After passing a certain trial, he got the chance at Schalke, where he met a God-sent called Norbert Elgert, the current FC Schalke 04 U-19 manager (as at the time of writing). 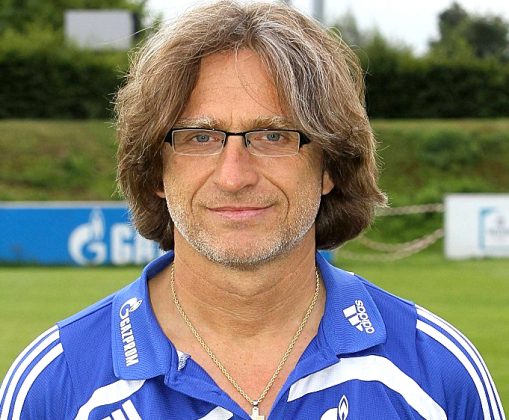 Norbert has the motto “Youth Talent Factory Expert” to his name.

He is responsible for helping many young footballers including Sead Kolasinac to become what he is today. Speaking with Arsenal Media, Kolasinac once said;

“It was only when I met Norbert, that I thought I had a chance to make it in football. He took me to one side and told me that, if I pulled in the right direction, listened to him, and did as instructed, I’ll have the opportunity to break into the senior team.”

Kolasinac started noticing progress as soon as he heeded to Norbert’s words and teachings which many youths had taken seriously. 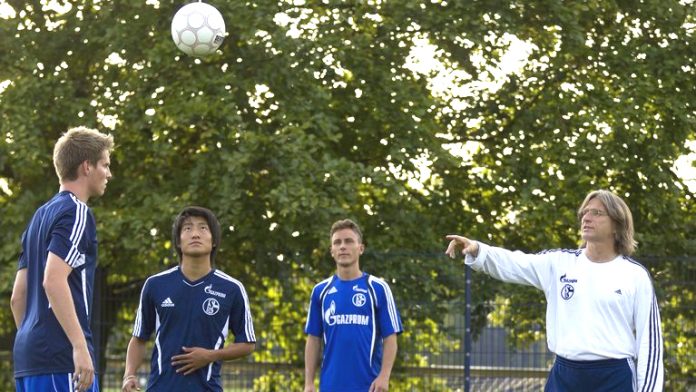 In the end, he got moulded into a man with personality, earning a place in FC Schalke 04’s senior team, all thanks to his God-sent.

Did you know?… Norbert Elgert was the man responsible for generating most of Schalke’s young talents (namely; Mesut Ozil, Julian Draxler, Leroy Sane, Manuel Neuer, etc) who have shone for both their club and country. 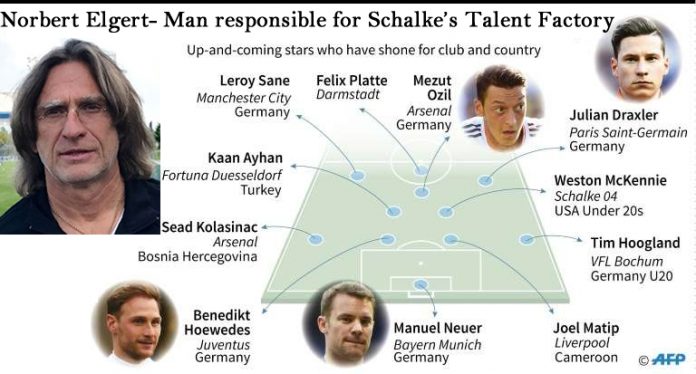 Getting Help from Ozil:

Getting into FC Schalke’s senior team, Kolasinac’s first point of contact was Mesut Ozil who helped him settle down. Coming from a similar migrant and Muslim background made their relationship smooth.

During his six years with Schalke, Sead established himself as one of the Bundesliga’s foremost defenders. 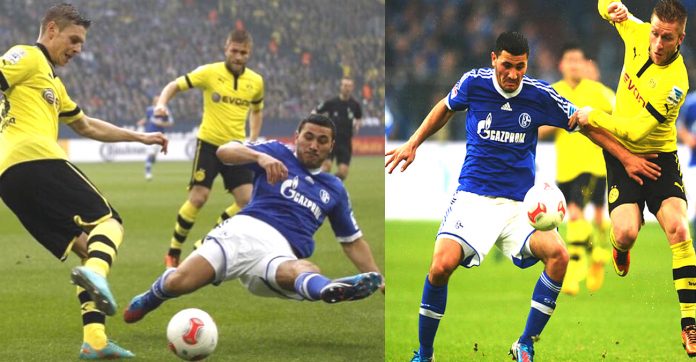 In May 2017, Kolašinac made the decision not to renew his contract with Schalke 04, thus ending his six-year spell at the German club.

Luckily, this was a time Arsenal was in search of a versatile defender. On 6 June 2017, Sead Kolasinac reunited with his old friend Mesut Ozil after signing on a free transfer with Arsenal.

Getting to London, Kolasinac immediately became the type of player that Arsenal has been criticized for not having in years. He quickly cemented himself as an early fan’s favorite at the Emirates, a moment he got the nickname “The Tank“.

Everything paid off for Kolasinac right from the moment he played his first game where he scored against Chelsea and earned himself a trophy. 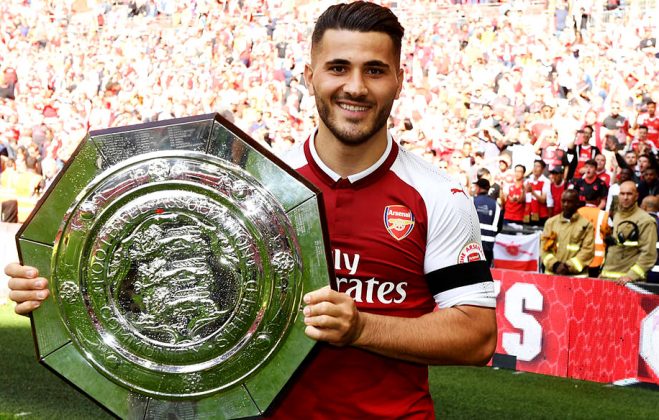 Winning the player of the month in the first two premier league months of his Emirate stay surely confirmed he was in the hearts of Arsenal fans. The rest, as they say, is history.

Kolasinac is one of those footballers whose romances escape the scrutiny of the public eye simply because his love life is drama-free. The defender has been with his longtime lover named Jana. 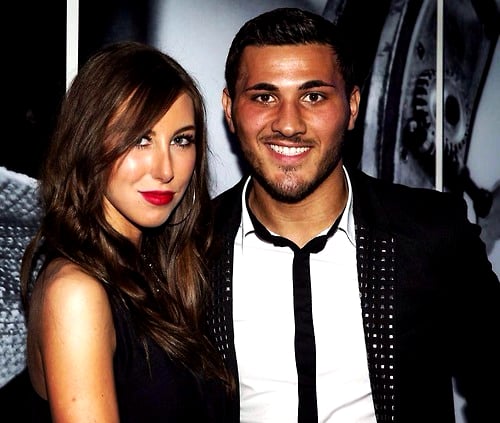 The two met in Gelsenkirchen during his early days with Schalke 04. Little is known about Jana. Apparently, she has a rather interesting hobby which is; “Bird Watching“. 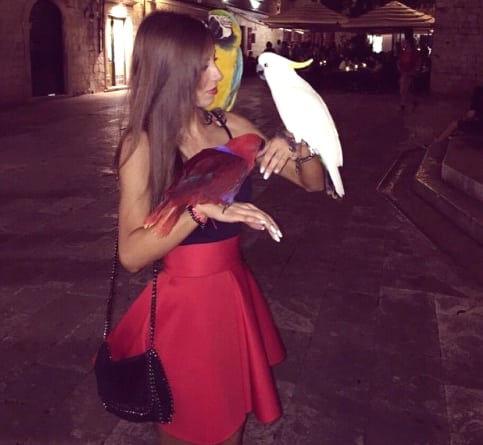 Getting to know Sead Kolasinac’s personal life would help you get a complete picture of him.

About his Ice Bucket Challenge:

When a footballer participates in the Ice Bucket Challenge, fans get curious as regards knowing the names of personal interests called.

Away from football, Sead’s personal workout routine isn’t complete without using a bed mattress. The way and manner he works out relate to the reason why he is called a “tank”.

Kolasinac is someone who respects and has shows allegiance to his roots despite growing up in Germany.

Even while growing up in Germany, Sead often listens to Bosnian music and loves his Islamic faith. 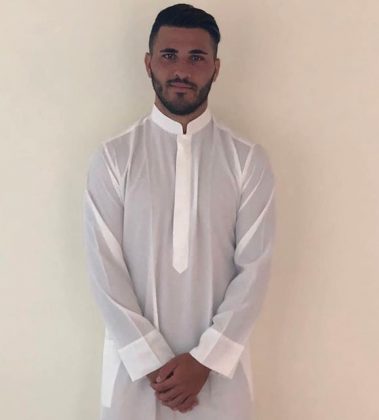 While on holidays, Sead loves to go visit his mum Karlsruhe once a week to eat his mother’s burek and cabbage rolls.

Love for his Dog:

Traditionally for Muslims, dogs are seen as impure and Muslims are warned against most contact with dogs. Sead Kolasinac has an unconditional love for his Wolfpack dog. 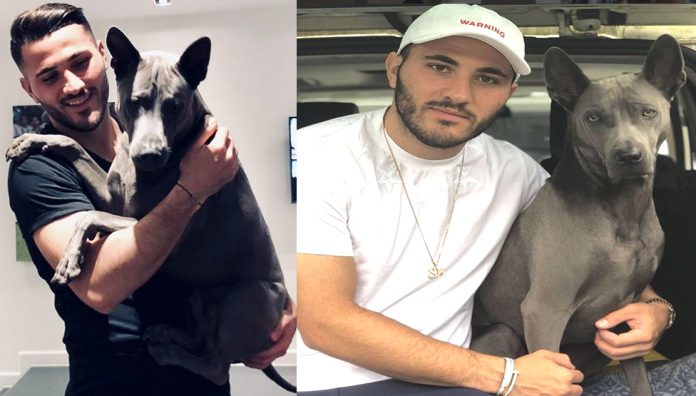 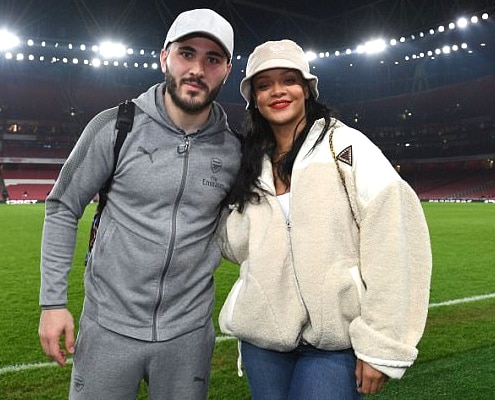 Back then as a child, Sead had a really nice time playing football with loads of people involved.

“In fact sometimes, 7 or 8 pm, we would have to wait outside because there were too many on the pitch.” According to Kolasinac.

When Sead looks back to his childhood, those evenings are still stuck right into his head. “Nowadays you drive past a football pitch and you barely see any kids playing thanks to online games via smartphones and computers.”  said Kolasinac on his discontent to today’s poor youth football climate. 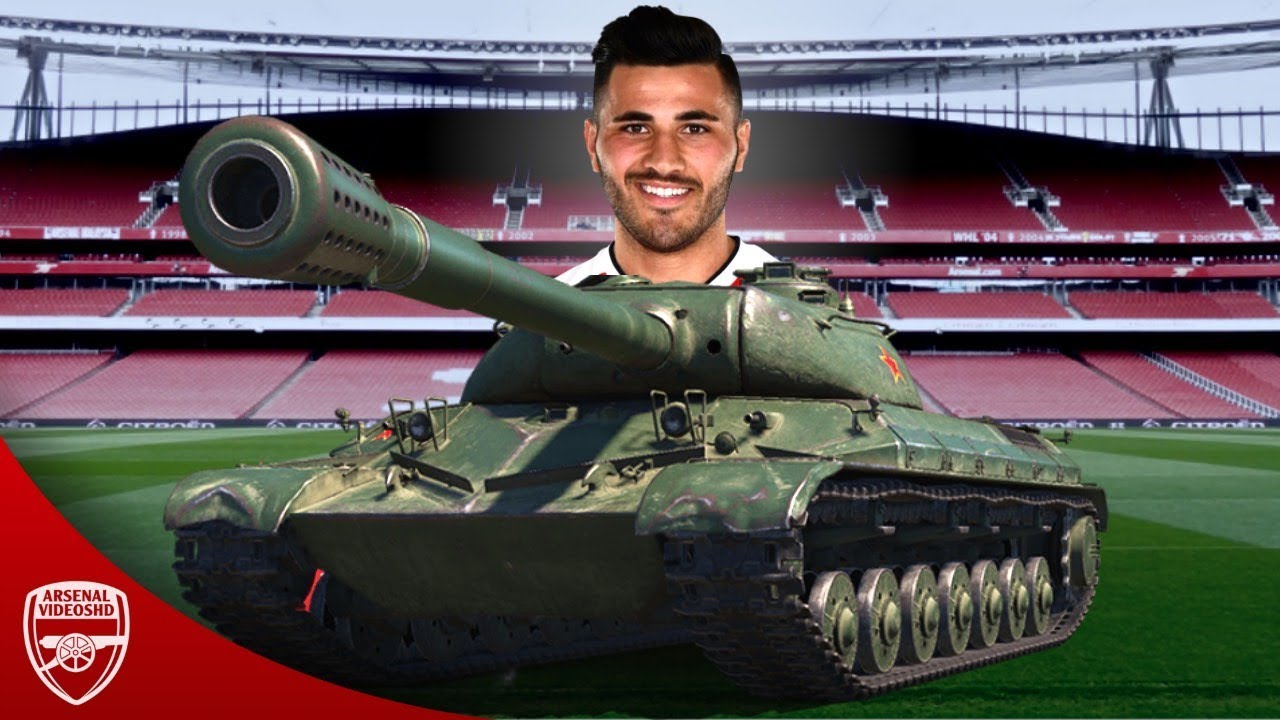 It’s hard to notice this unless you’ve not been paying attention to the defender. Did you know?…, if you’ve watched Kolasinac run with the ball, you will notice he bears a striking resemblance to a tank.

“In Bosnia, they call me that [The Tank] too! I’m happy to have such a cool nickname”  said Kolasinac.

Just like his former Schalke teammate Kevin-Prince Boateng, Kolašinac has played for two countries (Germany and Bosnia and Herzegovina) on the international stage.

From a global perspective, Kolasinac is perhaps best remembered negatively for the early own goal he scored at the 2014 World Cup against Argentina.

Showing a face of anguish (photo below), that goal still haunts him to date. 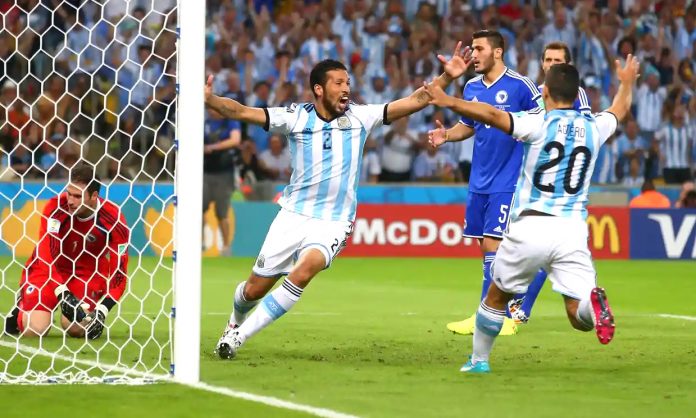 Below is the heartfelt video of the fastest own goal in World Cup history.