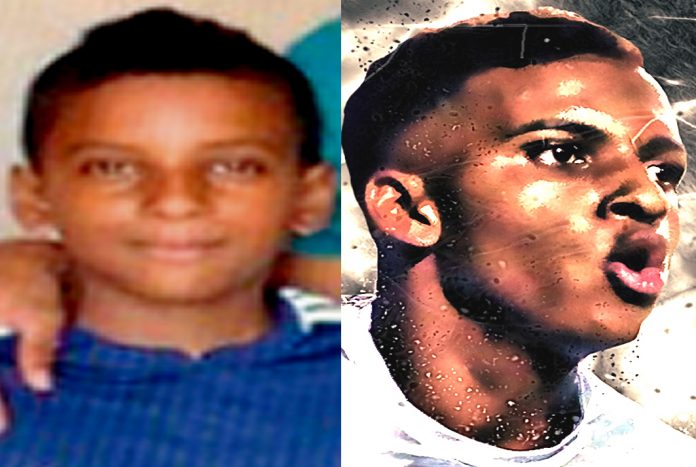 LifeBogger presents the Full Story of a Football Genius with the nickname “The New Neymar“.

Our Rodrygo Silva de Goes Childhood Story Plus Untold Biography Facts brings you a complete account of notable events from his childhood time to the moment of global fame.

Yes, everyone knows he is that Blitzing Offensive Weapon That Real Madrid Couldn’t Miss Out On.

However, not many soccer fans have read our in-depth version of Rodrygo Goes Biography, which is quite interesting. Now, without further ado, let’s begin.

For Biography starters, Rodrygo Silva de Goes was born on the 9th day of January 2001 to his mother, Denise Goes and father, Eric Batista de Goes in the state of Sao Paulo, Brazil.

Find below, a lovely photo of his young beautiful parents, persons who gave the Real Madrid Superstar the power to defeat dragons.

Rodrygo is the product of a very young and successful marriage between his parents (Denise and Eric) when they were both teenagers. Rodriygo’s dad Eric is presently 34 years as at the time (August 2019) of writing this article.

His mum should also be in her early 30s. This, by implication, means that his dad had him when he was just 17 years of age.

Superstar Rodrydo was born as the first child to his parents. He grew up as their only child for years, having no brother or sister.

Rodrygo Goes family have their origin in the municipality of Osasco, located in the state of Sao Paulo. It is one of the most prosperous municipalities in Brazil by GDP measurements.

The busy city of Sao Paulo where Rodrygo grew up has more cars than Rio de Janeiro has people.

Also, it is a city that is known to consume 1 million out of the 1.6 million pizzas consumed by the entire Brazilian population.

To start with, Rodrigo grew up in a middle-class family background whose income came from sports. His dad began life as a footballer in Brazil’s lower leagues, which earned him not enough monies for his household.

Having had his son at an early age, Eric knew he wouldn’t get very successful in his career. He devised a plan to continue living his football dreams through his son, Rodrygo.

Early on, Rodrygo began his football escapades in his family’s living room, a feat that ignited his love for the beautiful game. Soccer education immediately followed thanks to his dad’s guidance.

Eric, who was a fan of Real Madrid, made sure his son emulate the skills and career path of Robinho who they considered very high.

Rodrigo wasn’t just exposed to the videos of Robinho but copied every one of his moves. At the age of 9 when he got a call-up to attend trials with Santos, his father’s pride knew no bounds.

Goes passion for soccer saw him passing trials in flying colors and joining the academy of Santos, which gave him his career foundation. While joining the youth system of Santos in 2010 at the age of 10.

Rodrygo’s parents insisted that their son should be assigned to the club’s futsal team. This was a path taken by the family’s football idol, no other person but the legendary Robinho.

Right from the age of 10, Rodrygo began to play with boys who were bigger and older. He always stood out in his games.

Playing Futsal as a forward helped him have the technique of keeping the ball at his feet, dribbling past defenders, and using his pace to score goals.

This was a similar attribute possessed by Robinho during his early playing days with Futsal. As Rodrygo continued to develop, he saw himself continually becoming the best among his peers.

This feat brought in a constant pressure to perform, which he was able to handle thereby becoming the captain of his youth team.

As Rodrygo approached 16, the talks about professional contracts and scholarships arose. In March 2017, he was called up to the first team by manager Dorival Júnior.

Rodrigo made his Copa Libertadores debut on the 1st of March 2018, breaking a record as the youngest Santos player to appear in the competition, aged 17 years and 50 days old.

Just two weeks later, in the same competition, Rodrygo scored his first goal in the tournament.

This feat made him become the youngest-ever Brazilian to score in the Copa Libertadores. Rodrygo was also awarded the Campeonato Paulista Best Newcomer for 2018. 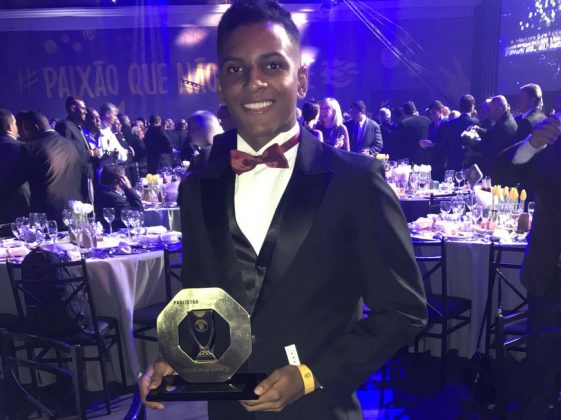 Goes endured a meteoric rise to prominence to become one of the hottest young properties in South America, a rise that can only be comparable to that achieved by his idol Robinho.

His remarkable dribbling skills attracted Real Madrid scouts who, at that time, were on their endless raid on South American players, one of whom was Vinicius Junior.

This is the most important day in his life that finally came to pass. The day Rodrygo fulfilled his dreams by signing for Real Madrid in a deal that showed he would be booked ahead of time.

Precisely on the 15th of June 2018, Real Madrid reached an agreement with Santos for the transfer of Rodrygo, a deal which became triggered a year later, June 2019.

First, it was the 1-year wait, then a very emotional time came for Rodrygo Goes as his parents joined him in saying some heartfelt goodbyes to his beloved childhood club.

“It motivates me to go to Madrid, one of the biggest clubs in the world. For the club’s sheer size, it is scary for me, but a good fear. It motivates me even more and it means It’s up to me to show why they have confidence in me and on signing me.”

Rodrygo said while signing off.

Superstar Rodrygo is indeed one of the best among the endless production line of amazing forwards coming out of Brazil.

For us, he is considered the next beautiful promise to Brazilian football after Neymar Jnr. The rest, as they say, is history.

Considering that his parents got married during their teenage years, it is fair to ask if Rodrygo has a girlfriend or wife at his young age.

Rodrygo’s rise to fame and joining Real Madrid leaves fans to believe that a possible hidden romance exists for him, perhaps one which escapes the scrutiny of the public eye simply because his love life is very private and possibly drama-free.

At the time of writing, we believe Rodrygo has preferred to focus on his career and has sought to avoid any spotlight on his private life, leaving no clue about his love life and dating history.

Getting to know Rodrygo Goes personal life away from the pitch would help you get a complete picture of him.

Away from the pitch, Rodrygo possesses an inner state of independence which enables him to make significant progress in his personal life.

The skinny superstar lives a normal life outside the pitch while in Brazil. Judging by the photo below, you shouldn’t be surprised to see Rodrygo with a skateboard in the street of Madrid.

Also, in his personal life, Rodrygo Goes has the attribute of self-control, the ability to make solid and realistic plans for his life.

He is a leader who can lead the way as observed during his captaincy days at the youth level.

First things first, Rodrygo Goes’ parents and relatives are presently reaping the benefit of instilling a tough mentality in him. His parents have appreciated their son’s support for Real Madrid right from the very start of his career.

See a piece of video evidence below where a 9-year-old Rodrygo stood with his parents on an old Real Madrid shirt. This is shown alongside a similar 2019 photo.

Rodrygo’s dad is 34-years-old as at the time of writing.

Did you know?… Eric Batista, pictured below with his son, only recently retired from his playing career as a right-back and now living his fatherly dreams as a caretaker to his son’s career.

Eric Batista, whose friends and relatives often regard him as a “classical Brazilian“, played in Sao Paulo’s regional leagues in what many would say was an unsuccessful career.

When it comes to footballers with seriously Gorgeous Moms, we can say that Rodrygo Goes tops the list.

Denise Goes is not only beautiful but very young (in her early 30’s) as at the time of writing.

Upon stumbling at the photo at first glance with no idea who she is, you might assume that she is Rodrygo’s Girlfriend.

Around early 2018, Rodrygo’s parents had a baby girl, which happened to be Rodrygo’s one and only sister.

Having a little sister made him feel fatherly and it also make him fell he is all grown up. As observed below, a deep connection exists between both brother and little sister.

Just like his teammate Takefusa Kobo, Rodrygo also has a strong grounding from his parents. He has learned how to keep his monies in check thanks to groundings by his parents.

As at the time of writing, Rodrygo is not allowed to live a glamorous lifestyle easily noticeable by fleets of expensive cars.

Getting Blessings of the Greats: Before going to Europe to join Real Madrid, Rodrygo received blessings from Brazil’s two greatest footballers namely Pele and Senior Ronaldo.

Thanks for reading our Rodrygo Goes Biography and his Untold Childhood Story.

At LifeBogger, we strive for accuracy and fairness in our quest to deliver football stories of The Seleção. Surely, the Life History of Andrey Santos and Endrick Felipe will excite you.