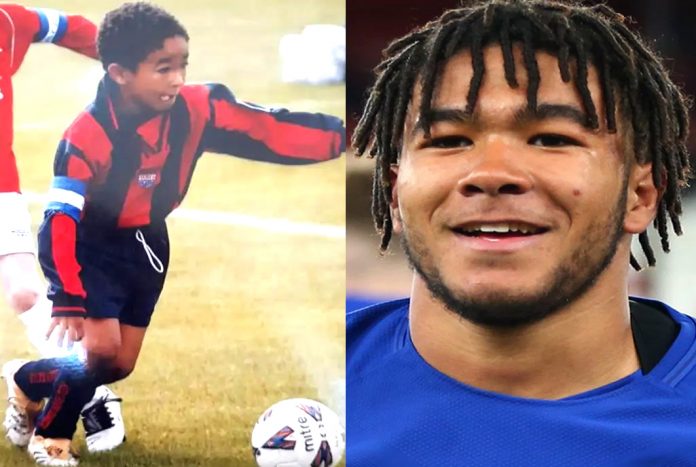 Our Reece James Biography tells you Facts about his Childhood Story, Early Life, Family, Parents, Girlfriend, Wife to be, Lifestyle, Net Worth and Personal Life.

In a nutshell, we’ll analyse the history of the English professional footballer’s journey to stardom. Lifebogger begins from his early days to when he became famous.

To whet your autobiography appetite, here is a cradle-to-rise gallery — a perfect summary of Reece James’ Bio.

Yes, everyone knows he is the successor of César Azpilicueta. More so, he is a player who has gone from the back garden to England’s history.

However, only a few consider Reece James’ Bio, which is quite interesting. Now, without further ado, let’s begin.

For Biography starters, Reece James was born on the 8th day of December 1999 at Redbridge in England.

He was the second of three children born of the union between his little-known mother and his father Nigel.

The British national of black ethnicity with African roots was raised at his birthplace in Redbridge, North-East London, where he grew up alongside his older brother Joshua and younger sister Lauren.

Growing up in his hometown in Redbridge, Reece’s father, who triples as an ex-professional player and coach, introduced him to football when he was aged 4 in 2003.

The experienced dad started out by developing Reece’s hand-eye coordination via playing catch into the twilight hours of each evening.

Thereafter, he walked him through the basics of good footwork.

As the months progressed, practising football at the back of the family’s garden after school hours and during weekends became an integral and fun-filled aspect of Reece’s life.

The football prodigy soon felt the need to step out of his comfort zone to play football at a park behind their house and watch his older brother Joshua play with friends.

While the older boys were at it, Reece – known to be a shy kid at the time – would observe the skill and swagger that they brought to the game and try to replicate them when he felt there was no one watching him.

But as Reece grew older, his tenacity blossomed to the point that he confidently played competitive football games for a local club – Kew Park Rangers, as a 6-year-old.

James was still playing for Kew Park Rangers when his tact and ability to pull off impressive set pieces impressed scouts from Chelsea.

They invited him for trial at the club’s development centre, where he made a seamless transition from being a local club player to an academy talent alongside the likes of his contemporaries – Marc Guehi, Jacob Maddox, Mason Mount and Trevoh Chalobah.

Rising through the ranks at the academy, Reece was a burger away from being obese as the then 13-14 year-old gained a lot of weight that he sometimes experienced difficulty with playing for the entire 90 minutes of any game.

The development came with an attendant feeling of self-doubt, which he entertained to the peril of his ability.

No thanks to self-doubt, Reece ultimately failed to clinch any deal when his teammates were offered professional contracts.

Hurting from the development, Reece engaged in a rigorous training schedule that saw him wake up on Sunday morning for extra training sessions with a fitness coach while the academy helped him regain his lost form.

Pulling out of stagnation, Reece worked hard and experienced rebirth from the ashes by becoming versatile with central midfield and defence positions.

The youngster went on to cement his status as a defender to watch out for during the final of the 2017 FA Youth Cup when he shackled England’s best young attacking talents to help Chelsea defeat Manchester City 6-2 on aggregate.

Later that month, he was loaned to Wigan Athletic, where his superb form saw him win three awards, including the honour of club’s Player of the Year.

What’s more? Reece was selected in the 2018–19 Championship Team of the Season.

Fast forward to date, Reece is close to making his professional debut for Chelsea after recovering from injury.

He has been tipped to challenge captain Cesar Azpilicueta for the right-back spot as well as become a captain in the future.

Following Reece’s inspiring rise to fame story, many have been keen on knowing about his love life, specifically to figure out if he had a girlfriend or wag that was part of his success story.

However, the right-back has brought such a quest to futility by not leaving any clue that suggests whether he is dating or not.

As a result, Reece, who has no son(s) or daughter(s) out of wedlock, is believed to be single and focused on laying a strong foundation as he looks forward to exploiting a decade-long career in top-flight football.

Speaking of Reece James’ family life, he comes from a middle-class and sports-loving household of 5. We outline facts about members of his family.

Nigel James is Reece’s dad. He is an ex-professional football player who runs his elite coaching facility for youngsters.

Described as a prolific coach and protective father, Nigel is a dad to two of English football’s top prospects.

Reece speaks highly of Nigel and credits him for drilling him on how to keep his head up amidst the vicissitudes of life.

Reece was born to a little-known mother, who he is yet to talk about in interviews.

Neither has he featured a photo of her on his social media handles at the time of writing. It is widely believed that the right-back who grew up with all shades of proper maternal care might be waiting for a special moment to unravel his mom to the world.

Reece has just two siblings. They include his older brother Joshua and younger sister Luren.

Like Reece, Joshua and Lauren were coached by their dad – Nigel to become professional football players. However, only Lauren made it to a professional level and played for Manchester United at the time of writing.

Moving away from Reece’s immediate family, there are no records of his paternal grandparents as well as his maternal grandfather and grandmother.

More so, not much is known about the right backs uncles and aunts, while his nephews and nieces have not been identified in notable events of his early life to date.

Moving on to Reece James’ personality, he has a rich persona that blends the tenacious and adventurous Zodiac traits of Sagittarius with the amazing quality of being adept and down to earth.

The right-back, who rarely reveals details about his personal and private life maximizes his free time by engaging a few interests and hobbies that include swimming, watching movies and spending quality time with friends and family.

Regarding Reece James’ lifestyle, his net worth is still under review at the time of writing, but he has a market value of €7,00 Million.

Though not yet a major earner, Reece spends within his means by living a conservative lifestyle.

As a result, he is not known to possess any house, and neither has he been seen navigating the streets of England with exotic cars.

Notwithstanding, he does know how to herald the coming of his future wealth by dressing well and spending vacations at cool resorts.

Reece’s Childhood story and biography would wrap up better with the following untold or lesser facts that are hardly included in his bio.

Reece James has no tattoos at the time of writing and has not been spotted drinking or smoking.

He is an England international and has so far played for the national team Under 17, 19 and 20 teams.

Regarding his religion, Reece has a Christian surname – However, it is yet to be established whether he is a believer or adherent of another faith.

FACT CHECK: Thanks for reading our Reece James Biography Facts. A player who is very much similar to Tariq Lamptey. Also, he is someone who is inspired by his childhood experience.

He has a girlfriend now confirmed on his social media