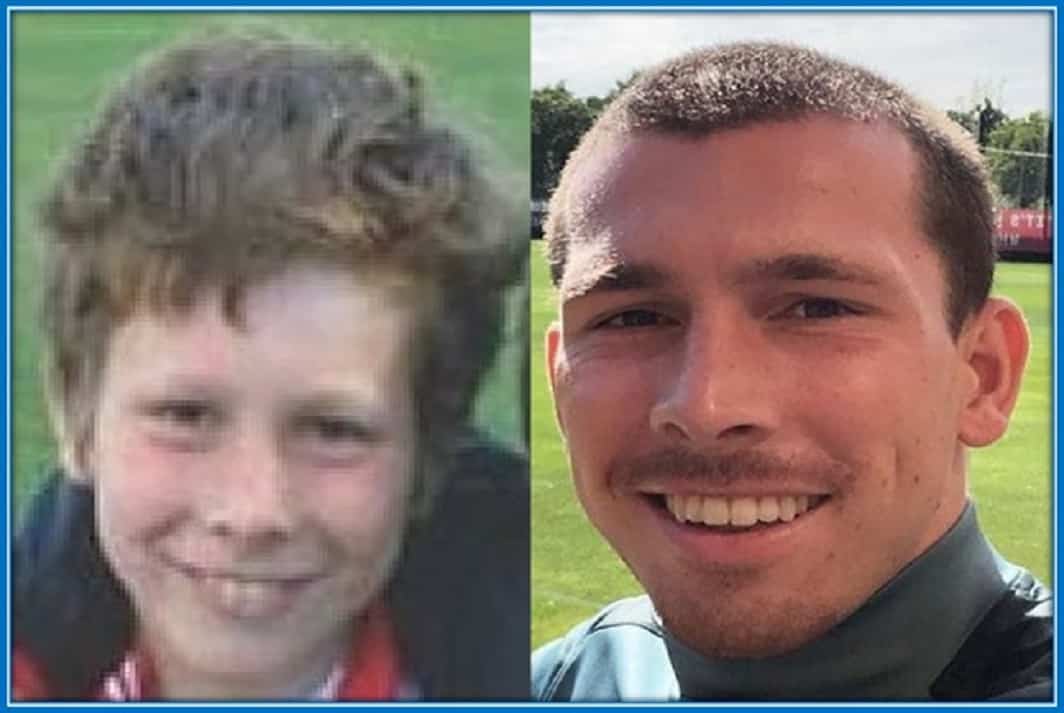 In logical terms, we present to you his life journey, from his early days, right until when he became famous.

To whet your autobiography appetite, here is his cradle and rise gallery — a perfect summary of Pierre-Emile Hojbjerg’s Bio.

Yes, everyone describes Pierre-Emile Højbjerg as the perfect key man for Jose Mourinho.

Despite the accolade, we realise only a few fans know his life story, which reveals a lot about him. Now, without further ado, let’s proceed with the story of his youthful years.

For his biography starters, the midfielder’s full names are Pierre-Emile Kordt Hojbjerg.

He was born on the 5th day of August 1995 to a French mother and a Danish Father, Christian Højbjerg, in the city of Copenhagen, Denmark.

Pierre-Emile Hojbjerg is one among three children (precisely the second child) born out of the union between his parents. Behold, the little Dane enjoying the warmth of his French mum.

As a carefree child, little Hojbjerg grew up under the care of his mum and dad, in the Osterbro district of Copenhagen.

His Dad, Christian Højbjerg raised him alongside two brothers- an older and a younger. All boys had wonderful memories of their fun-filled childhood, growing up in the city where life got started for them.

Like most people born in the Danish capital city (Copenhagen), Hojbjerg hails from a middle-class family background.

In fact, one of Pierre-Emile Hojbjerg’s parents – particularly his dad was an academic. As such, the entire family were well to do.

First and foremost, the midfielder is a Danish national with traces of his bloodline linked to France thanks to his mum.

Analysis of results taken to determine Pierre-Emile Hojbjerg’s family origins reveals that he is of the Amager Danish ethnicity. We can find the ethnic group in Copenhagen city.

The football genius was only five years old when his older brother taught him how to play the game. It was at the same age that he began attending the training sessions that his brother – who is one year older – also took part in.

According to the midfielder, his first experience with football was a baptism of fire. It wasn’t until after a few pieces of training that he began loving the sport and had dreams of making a career out of it.

At 14 years of age, the then-teenager was no longer a stranger to the kinetics and dynamics of football.

In fact, he already had a combined six years of career buildup experience training with two danish clubs. They include BK Skjold (2003–2007) and FC Copenhagen (2007–2009).

At the peak of his career with FC Copenhagen, Hojbjerg left the club to play for her rival Brondby IF. News of the move was not well received by his friends who thought of it as a betraying act.

The way the teenager saw it, it was a chance for him to prove himself in a new club where he wouldn’t be treated as an option.

Brondby was a very less successful club when compared to FC Copenhagen. Thanks to Hojbjerg’s impact, the club won the league title in his second season with them.

It wasn’t long before his performance caught the attention of a scout from Bayern Munich.

Interestingly, Hojbjerg was seen by the scout during Brondby’s 5-2 victory over Copenhagen. He scored twice during the match and even lent an assist.

Indeed, the midfielder’s move to Brondby was a career turning decision that he will forever live to cherish.

Upon joining Bayern Munich in 2012, the football talent career hit a fast lane. He debuted for the Reds’ first team in 2013 during a Bundesliga game against 1. FC Nurnberg.

With the appearance, the midfielder made history as the club’s youngest player in the Bundesliga at the age of 17 years and 251 days.

He went on to put up impressive outings during his loan spells at FC Augsburg and Schalke 04 and became captain of Southampton just two years after joining the club in 2016.

Fans of Tottenham are already excited to have Hojbjerg as a part of Jose Mourinho’s squad ahead of the 2020/2021 season.

His track record speaks well of an end to the club’s midfield hassles, and Mourinho will no doubts bring out the best in him.

In 2017 there was news about the midfielder welcoming a daughter. The announcement sent tongues wagging, with many speculating about whether the mother is Pierre-Emile Hojbjerg’s wife or just a girlfriend.

Lifebogger can authoritatively report that the midfielder is married. In fact, Pierre-Emile Hojbjerg’s Wife’s name is Josephine.

Her relationship with Hojbjerg is over 5 years old – from the time of writing this Bio. They got married in December 7th 2019 and have two children together: Rosa (born 2017) and Theo (born 2020).

The nuclear household is not just important to the midfielder, it is everything to him. Here, we’ll bring you facts about Pierre-Emile Hojbjerg’s parents, siblings and relatives. Now let’s proceed with his mummy and daddy.

First and foremost, the midfielder had a Danish father and a little-known French mother. Did you know?… Pierre-Emile Hojbjerg’s dad was an anthropologist and university professor.

He became extremely sick with stomach cancer during Hojbjerg’s early days at Bayern, a development that nearly told on the footballer’s performance.

Desperate to save his father’s life, Hojbjerg had Bayern fly his father over to Germany for intensive medical attention.

Although Christian had the tumour removed from his stomach, he didn’t live very long. Pep Guardiola was among those who consoled the midfielder as he cried with him over his dad’s cancer.

It goes without saying that Pierre-Emile Hojbjerg parents were very supportive of his endeavours, a development that explains why he has their best interests at heart.

Yes, the Danish midfielder had siblings who are all males. Among his brothers, Pierre-Emile Hojbjerg is considered the family’s bread-winner.

About Pierre-Emile Hojbjerg Relatives and Grandparents:

Across the board, in relation to his extended family, little documentation currently exists. This relates to his maternal and paternal grandparents. Hojbjerg’s uncles, aunts and cousins are unknown while his nephews and nieces are yet to be identified. Mind you, Dane is just getting popular and we might see his relatives in no time.

Regarding the player’s persona outside football, many know him as an ambitious, calm and friendly individual. The midfielder detests arguments and lives by the mantra of pursuing peace with all men.

He loves cooking whenever the opportunity presents itself while reading and travelling are part of his hobbies and interests list. Hojbjerg does also create quality time for family and keeps his friends close.

Net Worth and Lifestyle:

Here, we discuss the Midfielder’s net worth of 14.7 Million Euro in 2020 and how he makes his money. Details of the midfielder’s contract with Tottenham are sketchy at the time of writing. However, his salary should be over his 3 Million Euro annual earnings at Southampton.

The midfielder also has good money tripping in from endorsement as his secondary source of income. That’s enough to fuel cars (which he doesn’t flaunt by the way) and also pay rent/maintain the house or apartment he lives in.

To wrap up our interesting bio about the midfielder, here are little or unknown facts that you don’t know about him.

The footballer has an overall FIFA 2020 rating of 79 points which doesn’t quite reflect realities. Jose Mourinho would not have a sought after him if he wasn’t technically good. His case adds to the endless list of football geniuses who don’t have matching FIFA ratings.

Reason Behind his Hojbjerg’s Relentless Ambition:

Hojbjerg believes that the measure of a footballer’s worth is not the strength of his character, but titles won.

According to him: “At the tail end of a footballer’s career, the question wouldn’t be about whether the player was nice or bad, but about the number of trophies won.”

We already know that Hojbjerg’s dad’s name was Christian. The name speaks volumes of the belief system that possibly runs in the family. Thus, it is safe to conclude that the player is most likely a Christian.

Since you started viewing Pierre-Emile Hojbjerg‘s Bio, this is what he has earned.

On the above Tottenham salary stats, the average Danish citizen will need to work for at least 12 years and 2 months to make Pierre-Emile Hojbjerg takes home yearly.

To grasp a complete profile of Pierre-Emile Højbjerg, here is a table we’ve prepared.

You and I probably didn’t know of his ability until he became Spurs’ midfield heartbeat. The truth is, he is Mourinho’s ‘captain without an armband.’ Pierre-Emile Hojbjerg’s biography has given us lessons on the need to take chances when it matters.

Did you come across any unfair sentence in the course of perusal on Pierre-Emile’s Bio? If yes, please do well to leave a comment in the box below. Otherwise, tell us what you think about the midfielder from Copenhagen.