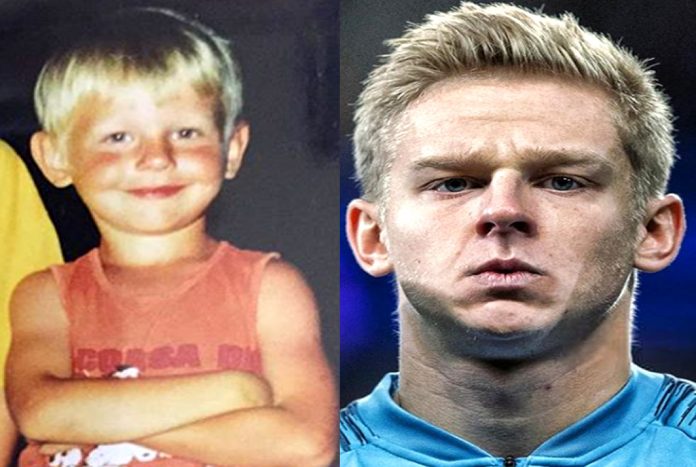 LifeBogger presents the Full Story of a Football Genius with the nickname “Oleksy“.

Our version of Oleksandr Zinchenko Biography Facts and Childhood Story brings you a full account of notable events from his boyhood days, right until the moment he achieved fame in the beautiful game.

Yes, everyone knows him as a Ukraine Football hero. Also, the fact that he is a versatile and dependent player for Pep Guardiola and Mike Arteta‘s left-back option.

However, only a few consider Oleksandr Zinchenko’s Biography, which is quite interesting. Now without further ado, let’s begin.

For Biography starters, Oleksandr Zinchenko was born on the 15th day of December 1996 to his father, Volodymyr Zinchenko, and mother (whose name is unknown) in the Ukrainian city of Radomyshl.

Zinchenko grew up as the only child to his parents in Radomyshl, a historical city in northern Ukraine that holds his family origin and roots.

This lonely city which is well known today for its museums and Cultural artefact was the administrative centre of The Holocaust, a term used to describe the World War II genocide of the European Jews.

Zinchenko wasn’t raised from a wealthy family background. His parents were like most people who do normal jobs, didn’t have the best financial education and often times struggled with money.

For Oleksandr, his city’s emptiness ended each time there was football on his feet.

He was not the child who was interested in the newest collections of toys, BUT only in a football and having his childhood best friend around him.

Gifted with the act of kicking and doing great things with the soccer ball. Zinchenko began his football escapades in his family living room, a feat which transcended into the fields of Radomyshl.

Providing self-education in soccer paid its dividends as a lucky Zinchenko got called for trials in his local town’s club, Karpatiya Radomyshl.

First thing first, Oleksandr Zinchenko’s passion for the game saw him at the age of 8 joining Karpatiya Radomyshl, a youth club that gave him the stage to lay his career foundation.

While at the academy, Zinchenko observed every soccer admirer, including his teammates, worshipping Andrei Shevchenko, Ukraine’s greatest footballer and idol to all.

Olek was more particular about the untapped talents in Ukraine. All he wanted was to be the next Sheva.

Zinchenko stayed with Karpatiya Radomyshl for four years before being scouted and acquired by Monolit Illichivsk, another Ukrainian youth club known for projecting young talents into bigger academies.

He was quick to make an impression with the club thanks to his determination to edge out among his equals.

Zinchenko made serene progress through the age groups, a feat which projected him into a top candidate for senior football opportunity.

Ofcourse, Oleksandr’s drive and determination are his most valuable assets. The year 2010 saw him being scouted by Ukraine’s biggest academy, Shakhtar Donetsk who tempted him into accepting their offer.

Little did he know he was entering into a career blockade. Now let’s tell you what exactly happened!!

Olek was ambitious to break into the club’s senior team, which had top stars, the likes of Fernandinho, Douglas Costa, and Henrikh Mkhitaryan. In Shakhtar, unlike other youth clubs Olek played, the situation became very difficult. In his words:

Simply put, the club BLOCKED his way to succeeding into senior football, and there was no way out for other Ukrainian guys who were affected.

This disappointment happened even while he was the captain of the youth team.

The club even went as far as proving another contact for him to sign with no assurance of a first-team integration. It was a forceful contract offer that came like a threat. In the words of Olek;

They said if I don’t sign, then I won’t play for them, even for their youth team which i managed. So for about four months, I was depressed.

I just attended every training session but didn’t play. I was on my own exile.

To worsen the situation, the Ukrainian War broke out, and the club went into crisis mode. At that time, Oleksandr was still held to his contract.

The war made his parents migrate to the Russian city of Ufa, a family decision that made Oleksandr abandon his youth career with Shakhtar Donetsk.

The past came back to haunt him in his quest to move to a bigger club to start a senior career.

Did you know?… At age 16, Oleksandr’s contract issues with Shakhtar prevented him from signing with Rubin Kazan. This was another problem that stopped him from playing for a whopping 18 months.

It took this amount of time for everything to be resolved.

At this end, Oleksandr joined Ufa, a Russian football club based in Ufa, the city his parents lived. The club gave Oleksandr the opportunity to play in the Russian Premier League.

Simply being wanted is a confidence boost for the young Ukrainian who felt the need to get exposed to a new culture, training method and habit.

Oleksandr Zinchenko endured a meteoric senior career rise to prominence in Ufa as he became one of the club’s hottest talents.

His performance attracted top European clubs, among whom Man City. On 4 July 2016, Zinchenko signed for Premier League club Manchester City for an undisclosed fee believed to be around £1.7 million.

Arriving at a club filled with a pool of talent, Zinchenko agreed to ship himself to PSV Eindhoven, a club that helped him adapt to life in western Europe.

His return to Man city at first felt rusty but later came with a stroke of luck when an injury to Benjamin Mendy gave him a chance to stake a claim at left-back.

As at the time of writing, Zinchenko, in the 2018/2019 season helped his team in winning their treble.

Although he might not be the Andriy Shevchenko, he once desired, but Oleksandr Zinchenko has proven to the world that he is the next beautiful promise of his Ukrainian football generation. The rest, as they say, is history.

With his rise to fame and winning the treble for Man City, it is certain that lots of fans would have asked the burning question; Who is Oleksandr Zinchenko’s girlfriend or wife?.

There are no denying the fact that his handsome looks wouldn’t make him a darling to his female fans. However, behind the successful footballer, there exists a glamorous girlfriend, in the person of Vlada Sedan who is a Ukrainian journalist.

The moment of pure love:

Did you know? …The MAN CITY star fell in love with his girlfriend while she was on duty with him as her client.

Because she appeared radiantly beautiful, Oleksandr Zinchenko didn’t only get tempted but fell in love deep enough to plant a kiss on her during a live TV interview.

This interview happened when the Ukrainian international had just come off the field after a big win over Serbia in a Euro 2020 qualifier.

After the planted kiss, fans later confirmed rumours that both lovers had begun dating. Ever since that beautiful moment, both lovers have been drunkenly in love with each other as observed from several shots taken from their social media accounts.

Without a doubt, Oleksandr and Vlada have remained some of the most established couples in the Ukrainian football world.

One of the couple’s favourite getaways for the summer is the Simpsons Ride, located in Orlando, FL 32819, USA.

The fact that both lovers don’t seem to slow down on their romance leaves no doubt that a wedding or marriage could be the next formal step.

What makes Oleksandr Zinchenko tick?. Getting to know his personal life away from the football pitch would help you get a complete picture of him.

Starting off, he is a footballer with a tough character and a personality which is made up of “One per cent talent, 99 per cent hard work”. Oleksandr is Sagittarius-born, and he loves to laugh and enjoy the diversity of life, as observed in the picture below.

This off-pitch personality is totally different from the person he becomes while doing his business on the pitch.

Judging from the photo below, you can easily conclude that Oleksandr Zichenko’s parents Irina and Victor, are presently reaping the benefits and blessings from their beloved son.

From what it seems, Oleksandr loves taking parents out for dinners. His devotion to making sure his dad and mum are comfortable is similar to the commitment he puts on the pitch.

Oleksandr appears to be much closer to his mother, unlike his dad. He has a close resemblance to his mum, unlike his dad which you can easily tell from the photo.

While little is known if he has any brother(s) or sister(s), Oleksandr’s Grand-dads are very much alive as at the time of writing.

We have crunched the numbers, this means he earns €683 (£601) per day and €28 (£25) per hour. Imagine you earning this amount of money and what you would do with it. For Oleksandr, he prefers living a simple life.

In this final section of Zinchenko’s Biography, we’ll unveil more truths about him. Without further ado, let’s begin.

This is the primary cause of a certain misunderstanding and mistaken identity between the two Man City players. From afar, they look like twins, but when we are together, both look different.

Speaking about this, Zinchenko once said; “I’ve heard it all the time, trust me. Lots of people call me ‘Kev, especially when I’m getting on the team’s bus.

The fans would shout ‘Kev, can I have a picture?’ But when I turned, they would be like ‘Oh, it’s not Kevin’. Credit to Telegraph.

FACT CHECK: Thanks for reading our Oleksandr Zinchenko Childhood Story. Including the Baller’s Untold Biography Facts. At LifeBogger, we strive for accuracy and fairness.

I fail in love with life bogger

Thanks a lot. I hope you enjoy reading our biography articles – especially this one. Please subscribe to our newsletter.