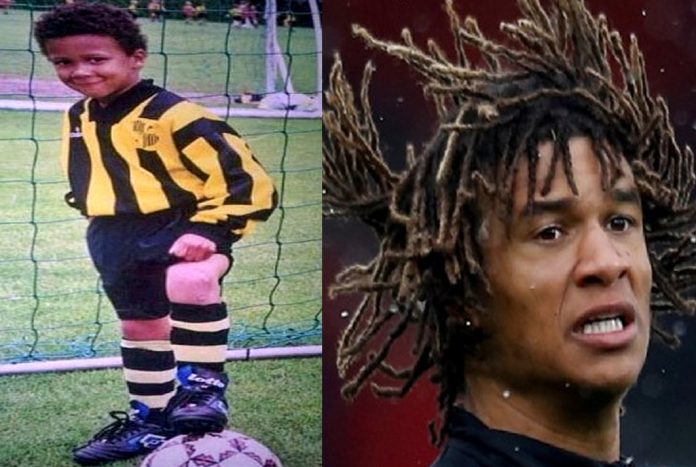 LifeBogger presents the Full Story of a Football Genius best known by the nickname “Wee Man.”

Our Nathan Ake Childhood Story plus Untold Biography Facts brings you a complete account of notable events from his childhood time to date.

The analysis of the Ex-Chelsea and Man City star involves his life story before fame, family background, relationship life, and many other OFF-Pitch facts (little known) about him.

Yes, everyone knows about his Rastafarian Dreadlocks. Only a hand few consider Nathan Ake’s Bio, which is quite interesting. Now without further ado, let’s begin with the story of Ake’s early life.

For Biography starters, his full name is Nathan Benjamin Ake. He was born on the 18th day of February 1995 to his Dutch mother, Ineke Telder, and his look-alike father, Moise Ake, in The Hague, the Netherlands.

Nathan Ake is the son of an immigrant father who migrated from the Ivory Coast to the Netherlands to seek and ensure the future of his unborn kids.

His dad, Moise Ake, is a teetotal (someone who chooses to abstinence total from alcohol). The Nathan Ake Family is praised for keeping grassroots football in their hometown of Voorburg near The Hague, Netherlands.

Nathan grew up in the Hague with his elder brother, Cedric, who as at the time of writing, works with Chelsea FC Mega Store. As a child, Ake was known to be a very shy kid.

Ake grew up under the tutelage of his parents, who were largely involved in youth football management in the Hague, Netherlands.

Nathan Ake’s dad was a youth academy manager for VV Wilhelmus football academy, while his mum helped with food for the same academy.

As an academy football coach, Nathan Ake’s dad Moise Ake paved the way for his son’s involvement in football during his early days.

Having a mum who also cooks for kid footballers also contributed to Nathan’s involvement in football.

His first club, Wilhelmus, which is the oldest in his home region, was founded by Catholic priests John van Houten and Wilhelmus van Stee.

Back then, Nathan Ake, pictured below, was one or two years younger than his teammates. Despite that, he was still the best. As seen in the photo below, he was among the shortest in the entire Wilhelmus youth squad.

It was a time every little boy got attracted to the cub. At Wilhelmus academy, emptiness ended for little boys when there was football at their feet.

For Ake, it was obvious early on that he had a bright future.

Starting his career, Ake learnt the trade of playing left-back or left centre-back. His female trainer pictured above was the person who taught him how to defend.

While playing at his hometown club Wilhelmus, youth scouts from Ado Den Haag, a big rivalry club to Ajax and Feyenoord, spotted Nathan Ake and took him on trial.

Ake in no time, became the club’s best player. Still, his only problem remained the fact that he was too shy, especially to the cameras, as seen below. 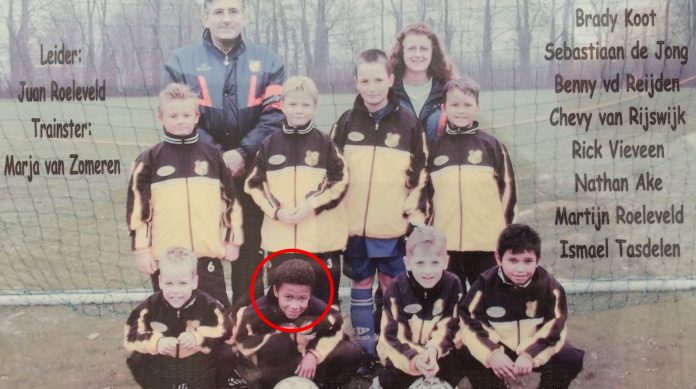 As he grew up in ages with Ado Den Haag, Nathan Ake was promised a fast-track route into the first team if he never left them.

It is pertinent to note that Tim Krul and Daryl Janmaat also emerged from the Den Haag Academy club.

Despite being promised a quick first-team inclusion, Ake disappointed the club by making his parents force a transfer to Feyenoord at the age of 11 and after five years of stay.

At Feyenoord, Nathan Ake enjoyed another five years stay (age 12 to 16), where he had a meteoric rise towards the later years at the club, a period that almost marked his youth academy completion.

At the age of 16, Ake led his team to win the youth Junior tournament. 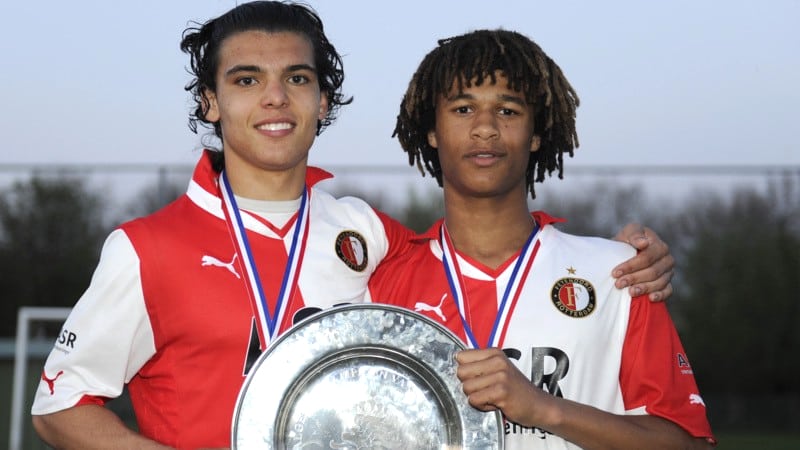 Still, at the age of 16, there was a high uncertainty about his stay at the club. This came as European clubs, including Chelsea FC, came calling.

Again, the teenager ended up giving his team another shocker. At a time when Feyenoord was about to accept him into their senior team, Ake made up his mind by boldly telling legendary Dutch manager Leo Beenhakker, then Feyenoord’s technical director, that he was leaving the club.

The truth is, Feyenoord became very successful after he left. Nathan could have joined the likes of Steven Berghuis, who won trophies at the club. However, we believe he took the right decision. Nathan once reflected on his decision by saying;

‘I was young, so that was difficult to say to someone like that,’

‘But you have to make decisions and you get stronger and grow up faster from that.’

Ake, at the age of 16, travelled alone to London to join the Chelsea youth system.

At Chelsea, Nathan Ake faced new challenges in his career, but none were as big as having made the journey from the Netherlands to London at the age of 16.

Behind every great man, there’s a great woman, or so the saying goes. Behind a  successful Ake, there’s a glamorous wag or girlfriend, as seen in the person of Kaylee Ramman pictured below.

Nathan, who started his relationship on the playground with his childhood sweetheart, has seen the relationship move from bestie status to true love.

As at the time of writing, Kaylee, with the help of her boyfriend, currently runs a jewellery business called Status Medal.

Apart from selling gold, Kaylee is also a travel blogger who owns her own website and likes to write about her adventures.

Her beautiful body and glorious curves, without a doubt, catch so much attention. 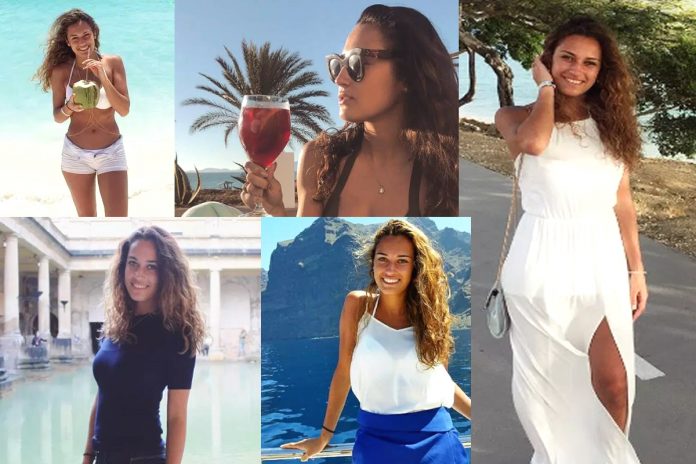 It is only a matter of time before wedding bells would start ringing for Nathan Ake and Kaylee Ramman. 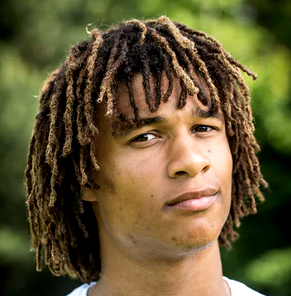 Nathan Ake was born shy and quiet but can be very eccentric and energetic. He is a deep thinker and a highly intelligent person who enjoys helping others.

Ake is able to see things without prejudice on all sides, which makes him a problem solver. Where ever his career takes him to, Nathan knows how to adapt to the energy that surrounds him.

At times, he loves to spend his time alone and away from everything except Kaylee Ramman, his girlfriend.

This is done in other to restore his energies and refuel his love life. For Nathan Ake, the world is true, a place full of possibilities.

Did You Know? Chelsea FC loan Players have a dedicated WhatsApp group which they use to share their experiences. Nathan Ake, pictured below, is very active in the group.

He joined when his loan spell at Reading started. This also continued for Watford and AFC Bournemouth. 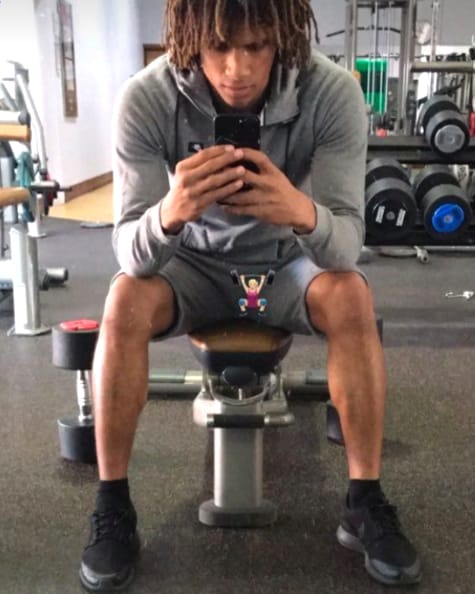 While the disgruntled Chelsea FC players choose to delete themselves, Nathan is among many others who have decided to stay behind. He is most active in the group after every physical training.

Thanks for reading our Nathan Ake Childhood Story, plus untold biography facts. At LifeBogger, we strive for accuracy and fairness.

Asides from Nathan Ake’s bio, we have other related childhood biography stories for your reading pleasure. The Life History of Luuk de Jong, Donyell Malen and Daley Blind will interest you.