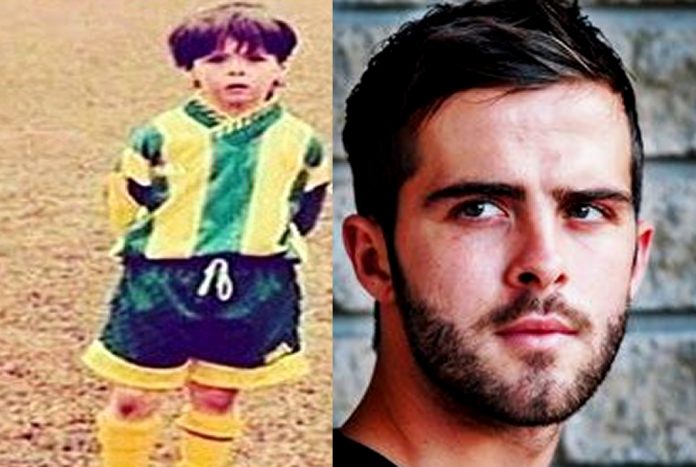 Lifebogger presents the full story of a Football Genius who knew by the nickname “The Painter”.

Our Miralem Pjanic Childhood Story plus Untold Biography Facts brings to you a full account of notable events from his childhood time to date.

Yes, everyone knows of his accurate, bending free-kicks, as well as his delivery from dead-ball situations, but only a few consider Miralem Pjanić’s Biography, which is quite interesting. Now without further ado, let’s Begin.

Starting off, Miralem Pjanić was born on the 2nd day of April 1990 at Tuzla, SFR Yugoslavia now known as Bosnia and Herzegovina.

He was born to his father, Fahrudin Pjanić (a third-tier footballer who worked an extra Job) and to his mother, Fatima Pjanić (a housewife at the time of Miralem’s birth).

Months after Miralem was born, his family moved to Luxembourg in search of greener pastures, a move which later turned out to be a key decision that saved the family’s life as his birthplace was months after their leave, caught up in a war that saw the loss of lives and destruction of properties.

Settling at their newfound abode in Luxembourg, Fahrudin Pjanić continued playing football and picked up a side job as a factory worker.

He also made young Miralem accompany him to training in order to get him acquainted with football, believing that his son could fare much better in the sport.

Fahrudin’s belief was not borne out of blind faith, but an event he witnessed during one of their routine holiday trips from Luxembourg to Bosnia. Years later, Fahrudi would recall that:

Young Miralem would never miss a chance of playing football, especially during our holiday trips from Luxembourg to Bosnia when he has less to worry about schooling.

Speaking further, he shared what he would live to remember as a startling discovery about the heights of Miralem’s passion for football

There was this particular trip that we arrived late at Night and i expected him to be fast asleep only to be startled by the whacking sounds from the garage.

Armed with my father we went to the garage expecting to apprehend burglars. But we suprisingly discovered it was Mirlem practicing.

It wasn’t long before Miralem (aged 7) enrolled at a first division team in Luxembourg, FC Schifflange 95 where he proved himself as an amalgam of talent and hard work, a perfect combo rarely exhibited by football start-ups.

It was at FC Schifflange that Miralem put up impressive performances that drew the attention of scouts from several Belgian, Dutch and German clubs.

Guided by his father with mentorship from former Luxembourg international, Guy Hellers. Miralem settled for a French club, FC Metz. 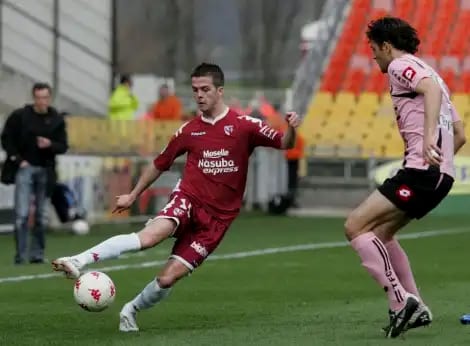 Miralem, who was in his early teens at FC Metz considered the club to be a launchpad to fame.

As a result, he worked to rise through the club’s youth teams. So high that he secured promotion to the club’s first team and made his debut while he was aged seven.

Having established himself at FC Metz first team Miralem moved to Lyon where he scored a goal for the club that saw Real Madrid knocked out of the 2009/2010 Champions League at the Bernabeu. 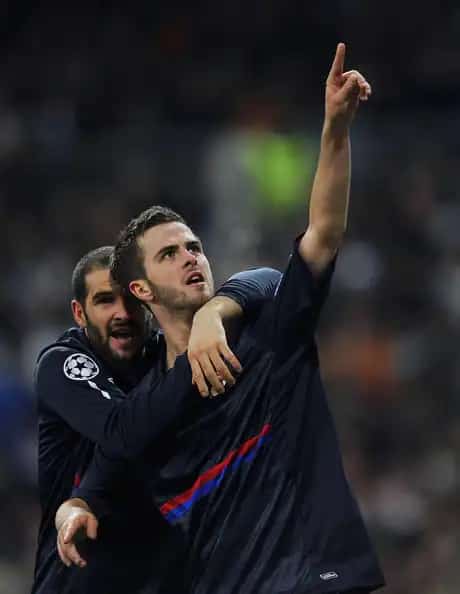 He also helped his side reach the semi-finals of the same campaign. Thereafter he moved to Roma in 2011 where he established himself as an exceptional midfielder in Italy’s Serie A. Before arriving at Juventus The rest, as they say, is history.

Miralem Pjanic has been with his longtime girlfriend, Josepha who is from Nice, France. Their relationship produced a son, Edin who was born in 2014. 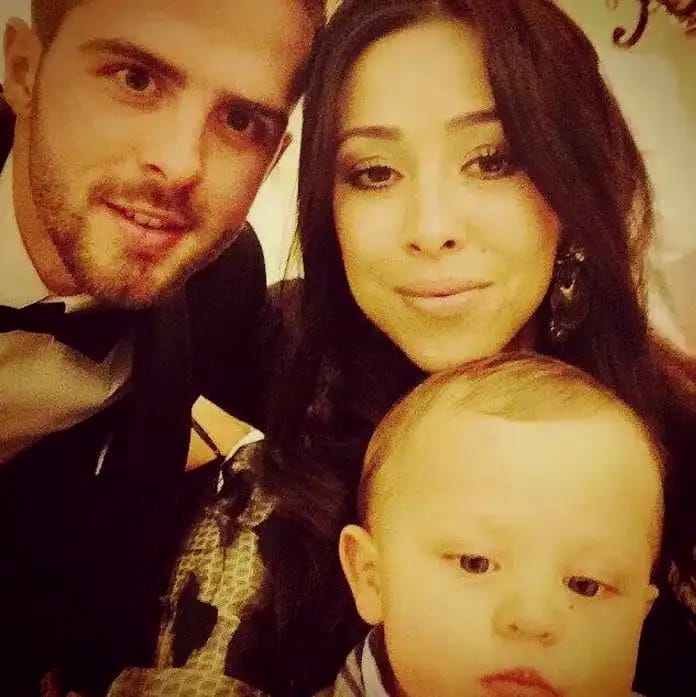 Sometime in 2013, there were rumours about him leaving Josepha. Leaving her for a sexy reporter, Giorgia Rossi, who he began dating in Milan.

However, the rumours were not founded on good authority as Miralem rekindled his on and off relationship with Josepha. 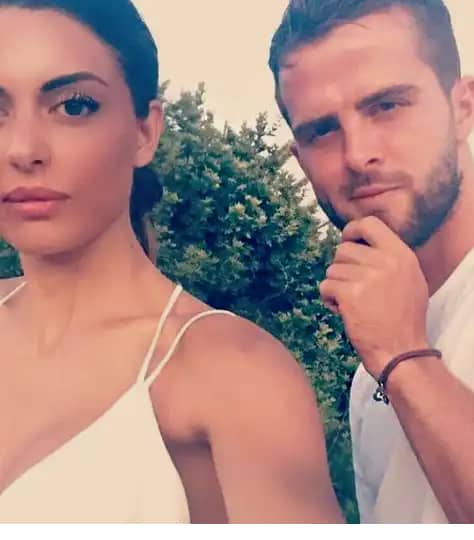 As at the time of this post, little is known about Miralem’s relationship with his new wag Francesca.

When it comes to religion, Miralem Pyanich identifies as a Muslim. His religious disposition is welcomed by his Italian fans. Fans who, despite being largely Catholics, are well known for their religious tolerance.

Worthy of mention is the fact that Miralem has made efforts to develop himself intellectually by studying sports and physical education at the University of Sarajevo. A path rarely treaded by football geniuses.

Miralem Pjanić has been described by many as hardworking, a trait that is the mainstay of his career success.

On physique, he has a height of 1.78m – near similar to David Silva and Bernardo. He has hazel eyes and has been always spotted wearing a beard ranging from stubble to full form. 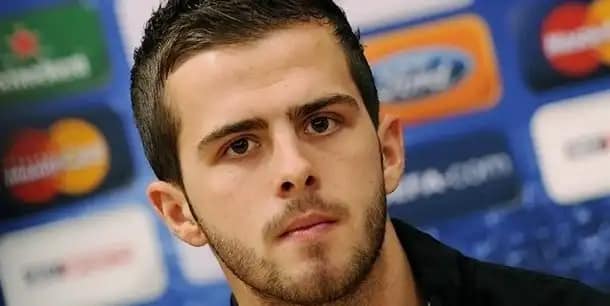 To cap it all, the Bosnian is a polyglot who speaks at least five languages. They are English, Italian, German, French and Luxembourgish. But surprisingly, he does not speak his native Bosnian language.

Pjanic due to his creativity and control with the ball was nicknamed “The Painter”. The Midfielder has a speciality in creating assists.

Which saw him become the top assist provider in Serie A for the past two seasons.

In fact, former Brazilian star Juninho described him, in 2015, as the greatest free-kick taker in the world.

“2Mire has incredible quality. He’s maybe the best free-kick taker in the world today. No I’m sure of it — he is the best”.

Miralem Pjanić has a healthy social media life, as evidenced by boisterous activities on his social media handles.

Starting off with Twitter, the football star has over 371 followers with his tweets largely career-based.