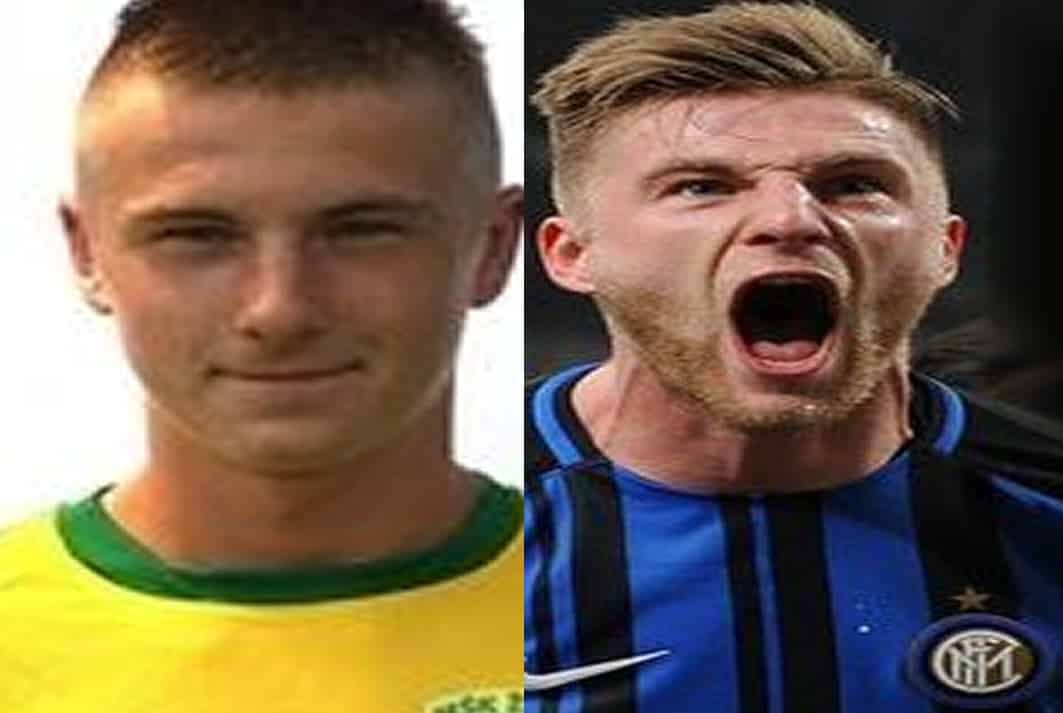 Our Biography of Milan Skriniar portray Facts about his Childhood Story, Early Life, Family, Parents, Girlfriend/Wife to be, Lifestyle, Net Worth and Personal Life. In simple terms, this is a story of the Footballer’s Life Journey, from his boyhood days, to when he became famous.

Yes, everyone knows the centre back is a strong tackler who is quick to make clearances. However, not many have read the biography of Milan Skriniar, which gives a full account of in interesting little known happenings in his life. Without further ado, let’s begin.

For bio starters, the footballer is a Slovak. He was born on the 11th day of February 1995 at Žiar nad Hronom, a city in Slovakia. Milan is one among no fewer than two children born to his little known mother and to his father who goes by the name Ľubomír Škriniar.

The centre back is a Slovakian by virtue of birth. Results of research into his family roots point to the likelihood that he is of Slovenska ethnic group. The ethnic group dominates much of Slovakia.

The future professional footballer grew up at his birth city in Žiar nad Hronom alongside an older brother. Growing up in the city, Milan had just one childhood dream. The dream was for him to become a footballer and play for a number of great clubs.

Truth be told, the Slovak’s football dreams had something to do with the fact that he was born into a household that was passionate about the sport. In fact, Milan’s father was a former footballer while his older brother has history playing the sport.

Thus, it wasn’t surprising that he began training with local side Žiar nad Hronom before he was 10 years of age. By the time Milan was 12 years old, he left his local club to begin an earnest career buildup with MŠK Žilina.

It was at MŠK Žilina that the football prodigy spent most years of his career developing skill sets that would bring him closer to his dream of playing for big clubs. At the peak of his career with Žilina, Milan made his first-team debut for the club in a Slovak Super Liga match against FC ViOn Zlaté Moravce. He was later sent to the club on loan.

Did you know that young the Slovak began his career buildup in football as a ruthless attacker who tormented opposition defences upfront? However, he became a midfielder at MŠK Žilina.

Subsequent changes in the football talent’s position saw him adapt to playing in the capacity of a centre back at Zlaté Moravce (2013) and Italian Side Sampdoria where he had a one year spell (2016-2017).

When the centre back eventually left Sampdoria for Inter Milan, his arrival hit headlines because the €20 million transfer fee made him the most expensive Slovak player of all time.

Needless to say much, the centre back was impressive in his first season (2017-2018) with the Nerazzurri and also did help them secure a place in the UEFA Champions League for the first time in six years. The rest as they say is history.

There are arguably a few people whom the Slovak’s heart beats for. One of them is his girlfriend and model, Barbora Hroncekova. The lovebirds have been a pair since Milan was playing for Sampdoria.

Tho not yet a wife to Milan, Barbora’s Instagram page features his surname name alongside hers. None of the duo have son(s) or daughter(s) outside wedlock and it will only be a matter of time before wedding bells ring for them.

Before the defender’s girlfriend came into the picture, his dad, mum and other household members were the source of a 100 per cent of the love and support that he got. We bring you facts about Milan Skriniar’s father and mother as well as his siblings and relatives. Without further ado, lets progress.

Starting off, Ľubomír Škriniar is the father of the centre back. He was once an amateur footballer and unarguably instrumental in helping the centre back develop an undying passion for the sport.

Even at the time of putting up the Milan Skriniar’s bio, his dad still keeps an expert analysis of his son’s performance and never cease to goad him to succeed. On her part, not much is known of the centre back’s mother. But there is no ruling out the fact that she does join other members of her family to watch the centre back play live.

About Milan Skriniar’s siblings and relatives:

The central defender didn’t just grow up along, alongside his mum and dad. Away from Milan Skriniar’s parents, he has a little known elder brother who was also into football but didn’t end up as a professional.

Regarding Milan Skriniar’s family ancestry and relatives, there are no records of his maternal and paternal grandparents. Similarly not much is known of his Skriniar’s uncles, aunts and cousins. The development goes across the board his nephews and nieces too.

Speak of traits that define his persona, did you know that he is driven by passion, focus and humility? In addition, the centre back is ambitious and hard-working like individuals born under the Aquarius zodiac sign.

When Milan is not training or playing football he can be found engaging a few interests and hobbies. They include reading, playing video games, travelling and spending good time with his family and friends.

The Central defender has an estimated net worth of 4 Million Euro as of 2020. Streams of income that contribute to the player’s wealth are the wages and salaries that he receives for being an amazing centre back.

To wrap up our childhood story and biography facts, here are lesser-known or untold facts about the centre back.

Did you know that Milan Skriniar has a fair overall FIFA ranking of 86 points? With such ranking, he is just 5 points short of being at par with Virji Van Dijk as well as a point better than Niklas Sule who has a rating of 85 points.

After several researches, we’ve come to a conclusion on this. The Truth is, it is particularly hard to conclusively state the kind of religion that Skriniar practices because he hasn’t left any pointers. In fact, the big question is more of whether the centre back is a believer or not.

like most football genius, the footballer always gets a warm welcome from his pet dog anytime he gets home. The cute little white creature has been with Milan for years and often appear on Instagram photos with him.

Thanks for reading our engaging writeup on Milan Skriniar’s biography. We believe you now know and appreciate him for who he is and how far he has come in the world of soccer. We hope you did find contents that we have put up about him to be fair and accurate? if not, please draw our attention to anything that doesn’t look right by using the comment box.