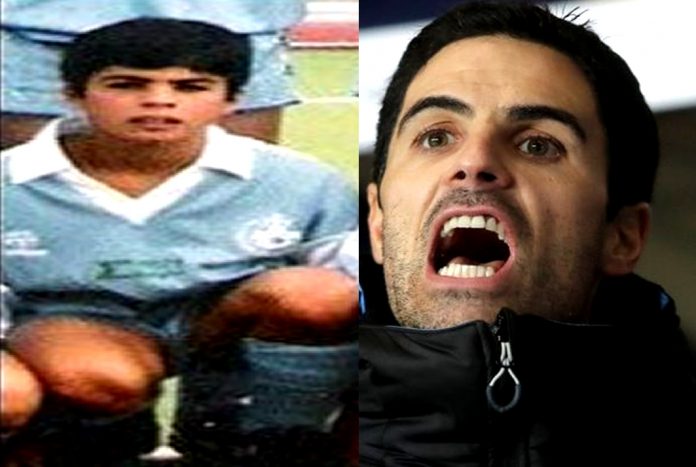 In a nutshell, we portray the history of the Arsenal inspired Manager. LifeBogger begins his story by telling events of his early days – right until when he became famous.

To whet your autobiography appetite, here is a cradle to rise gallery — a perfect summary of Mikel Arteta’s Bio.

Yes, everyone knows of his prospects in a managerial capacity. His issues with Mesut Ozil and  Pierre-Emerick Aubameyang show he is a no-nonsense manager.

In the course of our research, we found a knowledge gap that only a few fans have read Mikel Arteta’s Biography, which is quite interesting. Now, without further ado, let’s begin.

For Biography starters, Mikel Arteta Amatriain was born on the 26th day of March 1982 in the coastal city of San Sebastián in Spain. He was born to parents who he might probably reveal to the world after changing Arsenal’s fortunes for good.

Growing up in San Sebastián, baby Arteta was a toddler when he suffered a rare health condition in which his heart was not getting the right supply of clean blood.

As a result, he required an emergency heart operation that only a few doctors in Spain had practical knowledge of.

“I believe I was the first person in Spain to undergo that particular operation, and the doctors said there was no chance that I could do any sports activity after that”.

Recalled Arteta of the rare nature of his early life surgery.

Notwithstanding, Arteta had an inflamed passion for football such that his parents could not stop him from enjoying the sport.

Thus, his dad and mom consulted medical experts to determine how great the risk was because Arteta was never going to give up his passion for football.

“They were scared that something bad might happen to me someday when playing on the pitch. However, my heart only grew stronger over the years until it was no longer an issue”.

By the time Arteta was aged 8 in 1991, he began his career buildup in football at the amateur youth club called Antiguoko in San Sebastián.

While at the local club, young Arteta found purpose in football, honed his technical finesse and laced his boots, ready for a career that would take him far beyond Spain.

It was also at Antiguoko that Arteta nurtured his friendship with Xabi Alonso, a local peer he had earlier befriended on the grounds of healthy competition between them.

The then youngsters who engaged in impromptu exhibitions of skill and bravado became inseparable and determined to play for the same football team.

As a result, their decision was 100% predictable when they both received invitations to build a career at the local club.

Standing side-by-side in the centre of midfield, Arteta and Alonso dictated the tempo of each game for Antiguoko.

Their passing range and accuracy was an impressive sight to behold for fans and opponents alike as they helped their youth team to victory in tournament after tournament.

Arteta and Alonso were eventually separated when the former drew interests from Barcelona while the latter went to Real Sociedad.

Like the story of most players turned managers, Arteta had a chequered football career beginning from Barcelona, where he never made it to the club’s first team.

However, he found stability on loan at PSG and recorded significant improvements with Rangers. In 2004, Arteta joined Real Sociedad in order to fulfil his age-long desire of playing alongside his old pal Xabi Alonso.

Unfortunately, Alonso had to leave for Liverpool, a development which made the duo never played together as professionals.

To cap it all, Arteta failed to establish himself at Real Sociedad but was happy to be signed by Everton in 2005.

It is worthwhile to note that it was with the Toffees that Arteta had his breakthrough as a player, first by becoming a fan favourite and proceeding to clinch several awards.

Riding on his impressive track record, Arteta joined Arsenal and worked his way up to become captain of the club.

The then-playmaker was even nicknamed “Coach” by his teammates because his persistent interference in decision makings made them sense his determination to move into management.

It was therefore not surprising that Arteta joined Pep Guardiola’s backroom staff at Man City after hanging his boots in 2016.

It suffices to note that Working with Pep Guardiola at Man City prepared Arteta for full-blown managerial roles as the former drilled him on the failproof art of ruthlessness and consistency.

In fact, when Guardiola entrusted Arteta with the task of picking and leading a team that would play against Arsenal in a Premier League game, the then-assistant manager delivered according to his boss’s expectations as City defeated Arsenal 2-1.

When Arsene Wenger resigned in 2018, Arteta was interviewed as a possible replacement but Unai Emery was chosen instead.

It wasn’t until December 2019 that the one-time team captain was appointed to take over the reins of management at the Emirates after the sack of Emery.

Fast forward to the time of writing, Arteta is yet to make his managerial debut with Arsenal.

However, he is perceived by Gunners around the world as the man capable of ensuring that lackadaisical players give 120% to the club, which has become a worldwide establishment of ridicule.

As revealed by Rio Ferdinand, Arteta has won over Arsenal’s squad. The rest, as they say, is history.

Behind every great manager is a beautiful and caring wife, and Mikel Arteta is not lacking in that department. In fact, the manager met and began dating his incredibly glamorous wife – Lorena Bernal, in the year 2002.

Lorena is a Spanish model, actress and TV presenter that was born in Argentina but raised in Arteta’s birth city -San Sebastián.

By the time Lorena was aged 17, she won the beauty contest “Miss Spain”, held in Jaén and made it to the top 10 finalists at the ‘Miss World’ contest.

Arteta – who is known not to have had any girlfriend before Lorena – dated her for eight years before they tied the knot on the 17th of July 2010.

Every Family has a story to tell, especially when an offshoot of theirs becomes famous like Arteta. We bring you facts about the manager’s family background, beginning with his parents.

Do you know that Arteta is not big on revealing details about his family members?

It is easier to find one needle in a haystack than see photos that communicate the manager’s family life. Especially on his social media pages.

Neither does he talk about his mom and dad during interviews. Thus, little is known about the manager’s father and mother, including his family roots.

Similarly, the possible existence of a brother or sister is a matter of conjecture at the time of writing this biography.

Moving on to Arteta’s extended family life, there are no available records of his ancestry, particularly those of his paternal grandparents as well as maternal grandfather and grandmother.

Similarly, the manager’s uncles, aunts, cousins, nephews and nieces are yet unknown.

Personality traits that define Mikel Arteta are of Aries zodiac signs. They include his proclivity for ruthless competition and consistency.

In addition, he possesses an assertive persona and hardly reveals details about his private and personal life.

Regarding Arteta’s interests and hobbies, he has quite a number of pastime activities that include listening to music. Also, keeping up with tennis games, watching movies as well as spending time with his friends and family.

Do you know that Mikel Arteta has an estimated net worth of $13 million at the time of writing? The manager’s steady rising wealth has sources established in the wages and salaries he receives for being a football manager.

However, Arteta does live a conservative lifestyle which makes it difficult to track his spending habit.

As a result, we know little about the houses that he possesses. The same can be said of the cars. He uses it to navigate the streets of London as Arsenal’s new coach.

To wrap up our Biography of the ex-Arsenal player, here are lesser or little-known truths about him.

Arteta is not big on religion, judging by the fact that he rarely goes religious during interviews. Neither has he been captured on camera at a religious function. Notwithstanding, it cannot be fully established whether he is a believer or not.

The coach belongs to the good old school of managers who did not promote tattoos after they rose to fame. For Arteta, his fair height of 5 ft 9 inches is enough to inspire respect.

FACT CHECK: Thanks for reading the Childhood Story Plus Untold Biography of the Head Coach of Arsenal. At LifeBogger, we strive for accuracy and fairness.