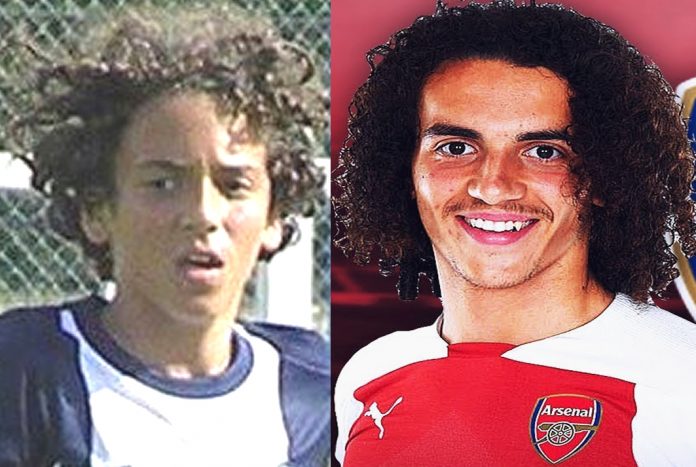 LifeBogger presents the Full Story of a Football Genius best known by the nickname “The New Vieira”.

Our Matteo Guendouzi Childhood Story plus Untold Biography Facts bring you a full account of notable events from childhood to the moment he became famous.

The analysis involves his family background, life story before fame, rise to fame story, relationship, and personal life. In addition, we’ll tell you other off-pitch facts that are little known about him.

Yes, everyone knows he is instantly recognizable by his long hair. However, not many football lovers have read a detailed version of Matteo Guendouzi’s Biography, which is quite interesting. Now without further ado, let’s Begin.

For starters of his Biography, his full name is Mattéo Guendouzi Olié. Mattéo Guendouzi was born on the 14th day of April 1999 in Poissy, France. Matteo Guendouzi’s family has their origins in Morocco – where both of his parents were born.

Both his dad and mum left Morocco early on and choose to immigrate to France in order to enjoy favourable economic conditions.

Guendouzi spent his early life in the Peugeot and Siemens manufacturing town of Poissy, the former royal French kingdom, west of Paris (20 minutes’ train from the capital).

As a child, he was not just alone with his lovely mum and dad. Guendouzi grew up with his siblings, a brother named Milan and a sister whose name is relatively unknown.

Both siblings today enjoy the benefits of having their big brother play top-flight football, a fulfilment of the Matteo Guendouzi family aspirations.

Speaking about his early life on a more personal note, Guendouzi grew up to be a child with a temperament touch. This temperament only arises when his ability to achieve a goal or set a target is cut short.

Early on, his long-term goal has been to become a professional footballer. Over the course of achieving this goal, his temperamental has been felt. We’ll give you much about this as we progress in this article.

Early on, Guendouzi was seen as a child who ate, drank, and slept with his football.

Back then, everyone in his home and Poissy neighbourhood enjoyed Guendouzi because he was a good kid with an innate and deep belief in himself.

Guendouzi’s desire to become a footballer came as when he was a 5-year-old thanks to the club of his heart – Arsenal FC.

Did You Know?… Guendouzi grew up watching, with his father, the videos of Patrick Vieira, Thierry Henry, and others who made history in the year 2004 as they won the premier league title unbeaten. 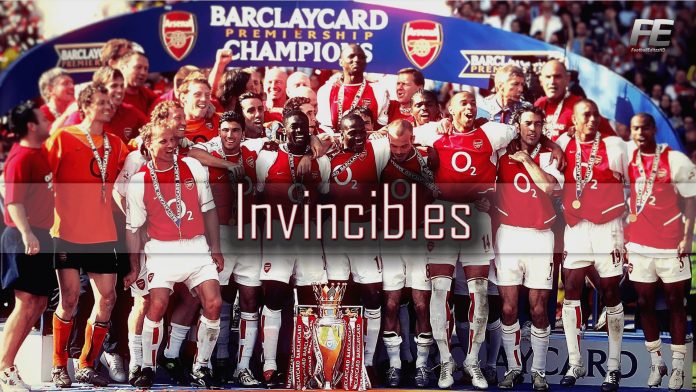 The next year 2005, saw Mattéo Guendouzi’s parents taking their son for trials in the neighbouring PSG, which was a 29-minute drive away from their home.

He had a successful trial and got his career all set and running.

Early in his youth career, Matteo Guendouzi became someone who would train all day with nothing to show for it.

Despite the hard work, his effort on the field of play would go unrecognized. 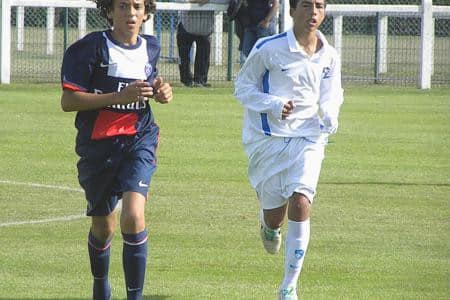 This situation caused lots of frustration and fear for Guendouzi and his household, as they knew poor performance could result in him getting released from his youth club.

Unfortunately, Guendouzi allowed fear and insecurity to get the better of him. At the age of 14 in the year 2013, he was released from PSG on the grounds of underperformance.

That same year he was released from PSG happened to be the time FC Lorient academy just got opened for business.

Guendouzi tapped on this opportunity, quickly enrolled, and had a successful trial with Lorient. Happy him!!! 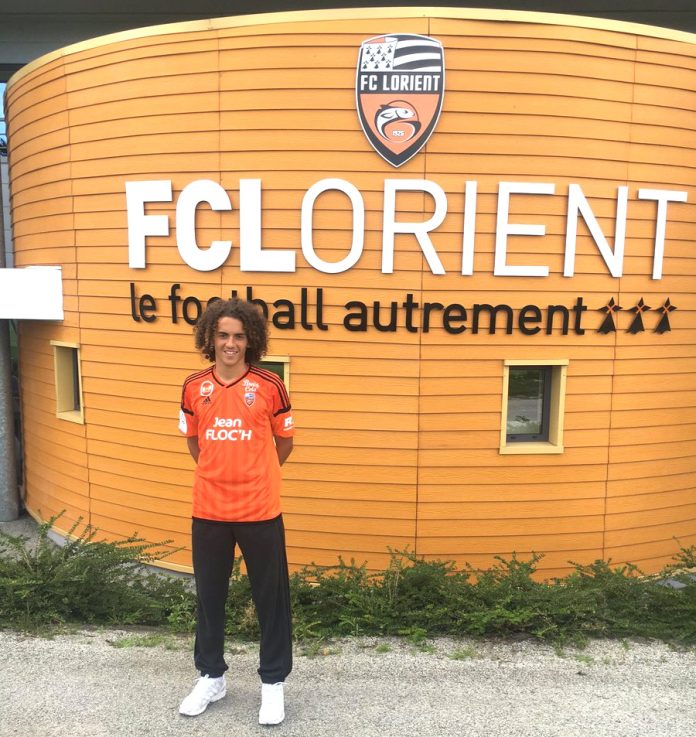 While at Lorient, he found the courage to kick off his fearless. This was coupled with hard work, more enthusiasm, and the natural ability to hold on to the thing he loves the most “football”. 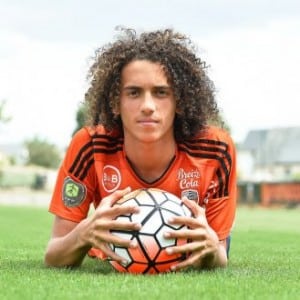 Thanks to his performance, it took no time before Guendouzi’s teammates began comparing their fellow countrymen to Adrien Rabiot.

They praised him for being calm in possession and very effective at breaking up plays. Just like any other talented youngster, Guendouzi became the best player on every team.

Guendouzi’s rejuvenated youth career inspired his parents to allow his little brother, Milan, to join him with his beloved Lorient.

Continuing on his hard work, Guendouzi inspired Lorient to win their first France’s under-17 tournament in the year 2015. 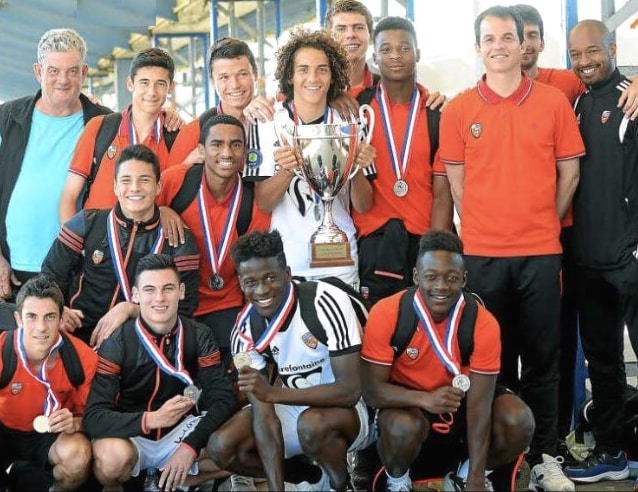 This victory did not just vindicate him but earned him the nickname “David Luiz” as he was compared to the Brazilian.

After the tournament victory, Guendouzi was granted a promotion to Lorient’s first team. It was well-timed, as it happened on the day of his 18th birthday.

Guendouzi’s first-ever season for Lorient saw his team finishing in seventh place, which made him sad. This had a clash with his aspiration of playing in the French top division. 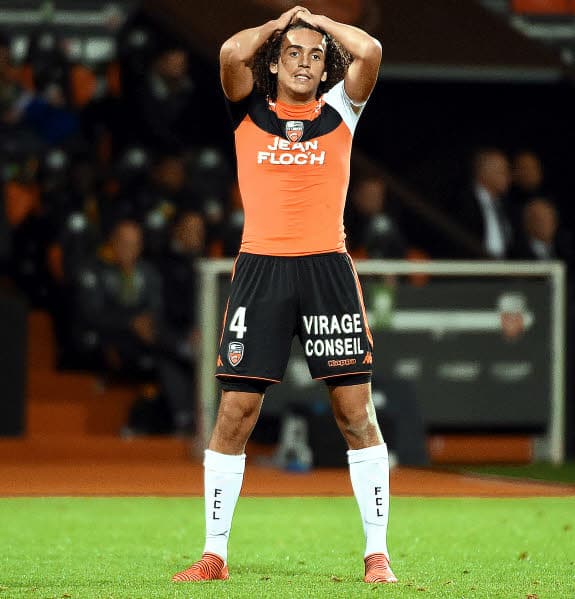 Guendouzi’s individual bravery on the pitch was not complemented by his teammates, who were comfortable remaining in the French second division.

It took no time before his temper arose, which led to a dispute with his manager, former French goalkeeper Mickael Landreau.

Their clash started during their game against opponents Valenciennes as Mickael Landreau got him withdrawn from his teammates before halftime. 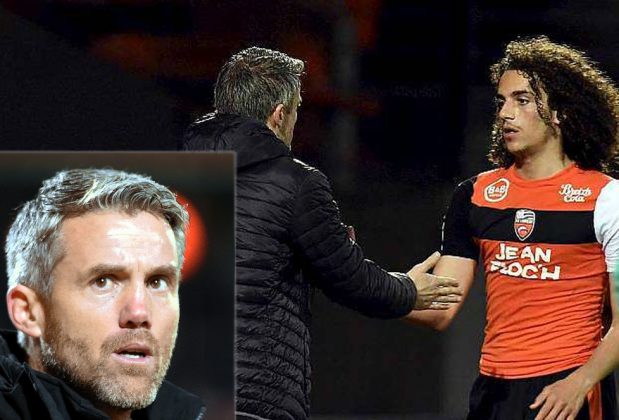 The consequence of Guendouzi’s actions became huge. It led to him being frozen out of the squad for three months.

In turn, he responded to his coach’s decision by refusing to return back to the squad when called back. Guendouzi started missing games and decided he was not signing any new contract.

The Transfer and Rise to English Fame:

During his out-of-favour days, Matteo Guendouzi’s love for Arsenal got the ears of Arsenal’s management – far away from London.

During interviews, he alerted Arsenal scouts after pointing out the club as the only club that can allow him can grow as a player.

Did You Know?… Paris Saint-Germain wanted to buy back Guendouzi, whom they once released. Their former boy bluntly refused and insisted he wanted Arsenal.

All he wanted was a team closest to his heart and that he had always wanted to join since his childhood.

Seeing this amazing development, Unai Emery’s decision was to send scouts to assess the situation. They quickly accepted him, fast-tracked the transfer process, and won the race for his signature. 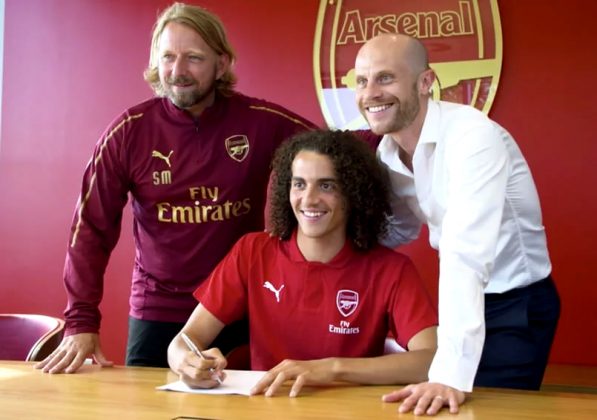 Not many teenagers who were doing well like him would have their pick at Arsenal, but Guendouzi is different!

All he wanted was a club that would not only nurture him but make him very happy. 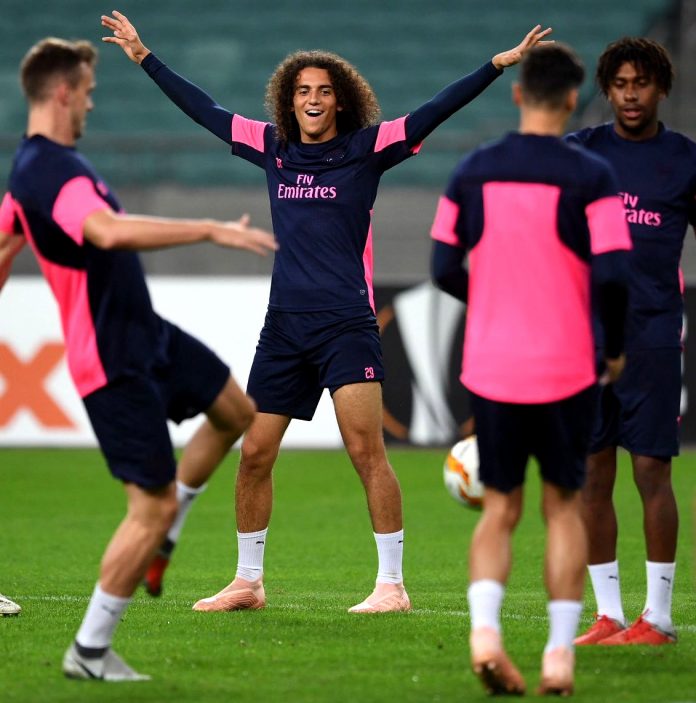 This led to him winning the club’s player of the month award in the month of August 2018. Furthermore, a fallout with Mikel Arteta had led to Matteo taking a loan move to OM. He found pleasure there, playing alongside the likes of Boubacar Kamara, Dimitri Payet, William Saliba, etc. 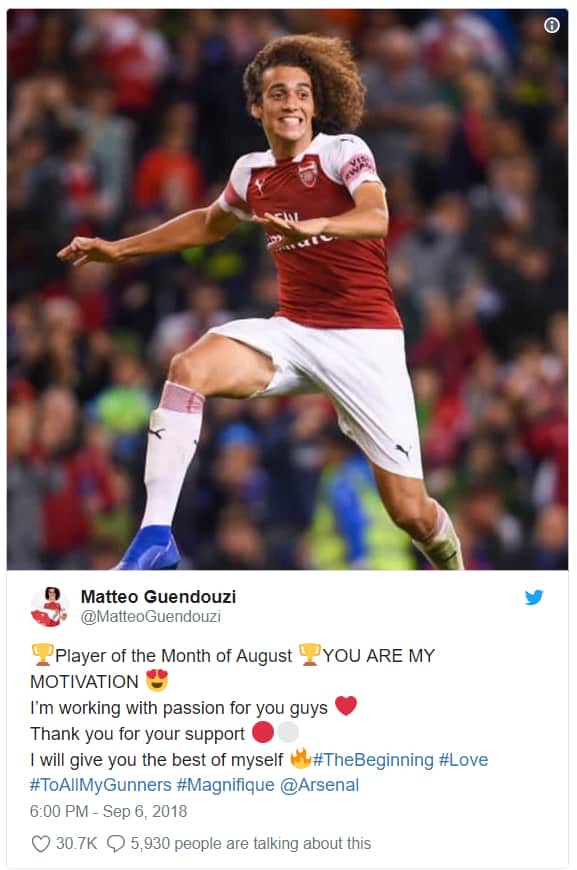 Who is Matteo Guendouzi Dating?

Always wanted to find out who Matteo Guendouzi’s girlfriend is…?

Before we reveal that information, we want you to understand that not every young footballer will like to reveal details of their private life, even if they exist.

This is the case with Matteo Geundouzi. At the time of writing his Bio, the Baller is yet to reveal the identity of his girlfriend or wife-to-be. 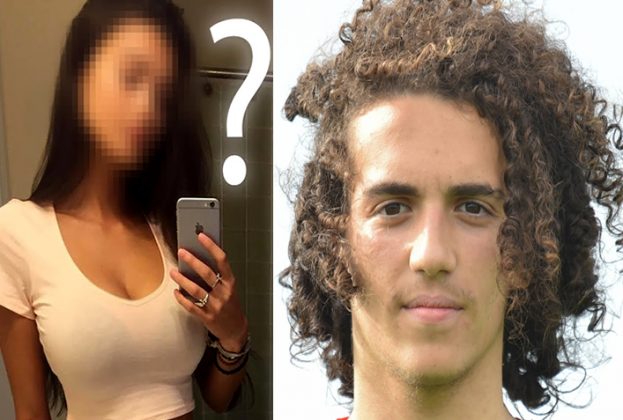 Simply put, he just wants to focus on his young career. This is evident as his social media page is devoid of photos of his girlfriend, even his father, mother, brother, or sister.

Moving away from his career life, Guendouzi enjoys a good relationship with Alexandre Lacazette and Aubameyang.

The trio shares a wonderful bromance, especially when travelling together for away matches. 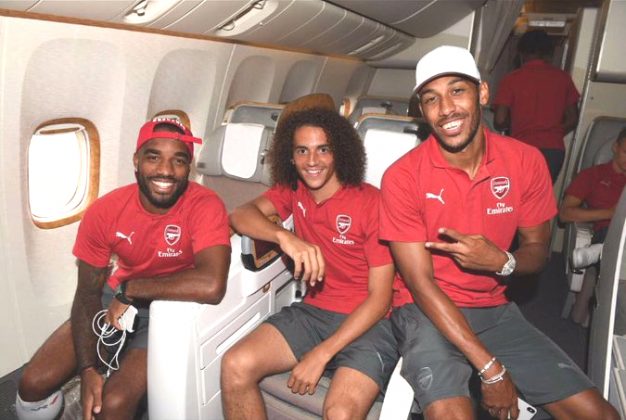 Among both friends, Guendouzi is much closer to Lacazette whom he often makes fun of in his Twitter account. 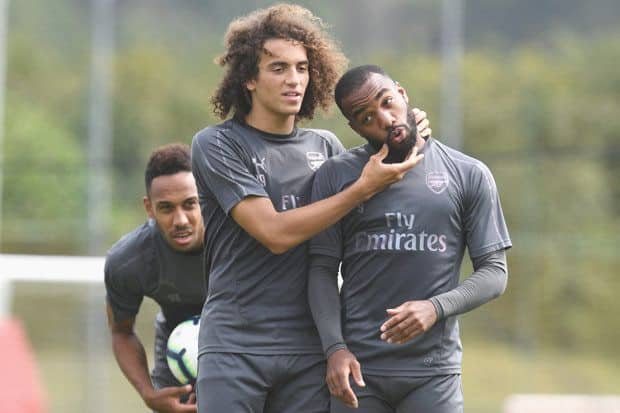 Whether playing on the pitch or with his friends, the presence of Guendouzi marks the beginning of something very energetic and turbulent.

He is someone who loves to be the first in everything – from career skills (see video below) to social gatherings.

Guendouzi is naturally brave and rarely afraid of trial and risk. He possesses plenty of youthful strength and energy.

Guendouzi is fearless and always ready to put any senior Arsenal player to shame, as seen in the video below.

This, among other reasons, makes football fans love him.