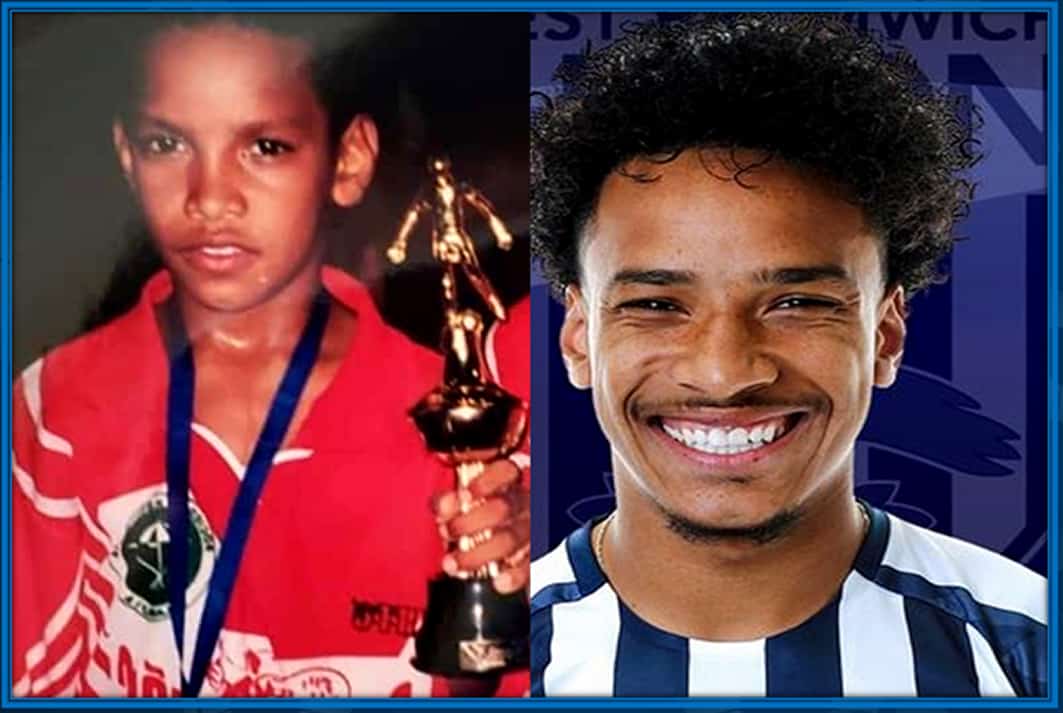 Our Biography of Matheus Pereira tells you Facts about his Childhood Story, Early Life, Parents, Family Life, Net worth, Wife and Lifestyle.

Simply put, we chronicle significant events in the life of the attacking midfielder, beginning from his childhood to when he became popular.

Yes, everyone knows of his excellent technical abilities and eye for a pass. However, only a few fans have read Matheus Pereira’s life story which is inspirational. Without further ado, let’s begin.

For bio starters, his nickname is Perry. Matheus Felipe Costa Pereira was born on the 5th day of May 1996 in the city of Belo Horizonte in Brazil. He was born to his mother, Viviana and to his father, Alexandre.

The attacking midfielder is a bona fide Brazilian national. Results of research carried out to determine Pereira ethnicity present the likelihood that he is of Portuguese ethnicity. The ethnic group dominates most parts of Brazil.

Although the winger was born in Brazil, it was in Portugal that he grew up. His family moved to the European country many years ago when Brazil suffered a financial crash.

Notwithstanding, Pereira has happy memories of Brazil. One of them is falling in love with football as a patient in a hospital. He told WBA that:

“WHEN I WAS A KID, I CAUGHT PNEUMONIA AND HAD TO SPEND TIME IN HOSPITAL. MY FATHER WANTED TO CHEER ME UP, SO HE BROUGHT IN A FOOTBALL. THAT’S WHEN HE REALIZED THAT I HAD AN EXTREME PASSION FOR THE SPORT. ONE DAY, WE WERE PLAYING INSIDE THE HOSPITAL CORRIDORS WHEN I SHOT AT A WINDOW THAT NEARLY GOT BROKEN. THE STAFF OF THE HOSPITAL GOT MAD AT US.”

Thereafter, Pereira recalls playing football in the streets of Belo Horizonte with kids who used their shoes or sandals to form goalposts.

“Perry” can also recall living at a pleasant home in Brazil. His father had a good job as a car salesman, while his mom was a homemaker.

In a nutshell, the family lived comfortably and sought to maintain the status quo after the migration.

Upon arriving in Portugal, the winger’s parents made their new home near Lisbon. Thereafter, Pereira’s mom returned to Brazil to bring him and his four siblings over to the European country.

It wasn’t long before the then 12-year-old began playing football in Trafaria, a club near Lisbon. Did you know that it was at Trafaria that Pereira got a recommendation to join the youth systems of Sporting CP?

While at Sporting CP, the football prodigy had a seamless rise through the ranks until he made his debut for their first team in the 2015-2016 Season.

At 19 years of age, Pereira was far from getting regular playtime with his boyhood club. Thus, the Portuguese side loaned him to three clubs for the purpose of getting more first-team action.

The budding attacking midfielder was first sent on loan to G.D. Chaves. He had an impressive spell with the Primeira Liga club, scoring seven league goals in eight appearances to help them finish in the sixth position.

However, Pereira’s next loan spell to FC Nürnberg was a mix of triumph and tragedy. He got individual recognitions that included a nomination for the Bundesliga Rookie of the Season award.

Sadly, his efforts were not enough as the German side suffered relegation by finishing last on the table.

When Pereira was subsequently sent on loan to West Bromwich Albion, he knew the time to put an end to his loan transfers was nigh.

As a result, he worked hard to establish himself in the English side and helped the club achieve promotion to the Premier League.

His run of good form and popularity made him win the Supporters’ Player of the Season Award.

Therefore, the Throstles wasted no time in triggering a buyout clause that saw Pereira announced as an Albion player in August 2020. The rest, as they say, is history.

Who is Thalyta? – Matheus Pereira’s Wife:

The 24-year-old (as of September 2020) is happily married. The name of Matheus Pereira’s wife is Thalyta.

They met 5 years ago and have been inseparable ever since. Thalyta is not just Matheus Pereira’s wife but his best friend!

She ensures that he has good rest and takes care of his business matters. What’s more, she attends his game.

The winger considers himself lucky to have found her. They are still young in marriage and are yet to have children together.

There’s no way we can practically talk about the winger’ life story without mentioning his family. We bring you facts about Matheus Pereira’s parents and siblings.

Also, we would provide facts about his siblings and relatives to help you get a complete picture of him.

The winger’s dad is Alexandre. We mentioned earlier that he was a car salesman in Brazil. He is also a football enthusiast who supported Belo Horizonte-based club – Atletico Mineiro before his migration to Portugal.

Upon settling in Portugal, Alexandre began selling cable TV for Sky to raise his family. The supportive father who often attended Pereira games, no matter how far the distance was, is proud of who his son has become.

Viviana is the mother of the attacking midfielder. She was a homemaker back in Brazil but took up a Job as a cleaner to help supplement the family’s income when they migrated to Portugal.

About Matheus Pereira Siblings and Relatives:

The winger has four siblings, whom he is yet to reveal. One of his grandfathers – Urbano Bonifacio da Costa, was a kit man and masseur at Atletico Mineiro club in Belo Horizonte, Brazil.

There are no records of the footballer’s grandmothers. Similarly, his uncles, aunts, siblings and nephew are yet to be identified. He does have a cousin called Davy and often uploads pictures of him on the gram.

Personal Life away from what he does on the Pitch:

Let’s talk about Perry’s life away from football. There are three things that define his persona outside the sport.

They include his humility, willingness to learn and openness to revealing facts about his personal and private life.

His daily routine includes work, rest, eating, and sleeping. Outside the aforementioned routine, Pereira loves travelling, hanging out with family and friends as well as relaxing close to natural bodies.

The footballer is into the sport for passion as well as the huge money it generates. In 2020 he signed a contract with West Brom Albion that will see him earn an annual salary of £312,000.

Thus, his net worth is projected to record a meteoric rise from £18,620 to hundreds of pounds in the ensuing years.

Perry also has income tricking in for him from sponsorship and endorsements. However, it is not yet in his character to flaunt his fast-rising wealth.

Thus, it is scarce to see pictures of him posing next to exotic cars or enjoying the comfort of a luxury house.

To wrap up this interesting bio of the winger, here are little-known or Untold facts about him.

This is what Matheus Pereira has earned since you began viewing his Bio.

Pereira is a believer who practices Christianity. In fact, he has strong links to an evangelical church known as the Igreja Evangelica Pentecostal.

When West Brom got promoted to the premier league, Pereira celebrated the promotion in a T-shirt that read, “I belong to God.”

The footballer has an overall rating of 76 points with a potential of 86 points. It is understood that the attacking midfielder hasn’t stayed long enough in a club to deserve high ratings.

His long-term contract with West Brom will most definitely help him surpass his current potential rating.

It is shocking to note that Pereira chose to represent Portugal instead of Brazil, the country of his birth. Explaining reasons behind his choice, the midfielder noted that:

“I BELIEVE MY ESSENCE IS BRAZILIAN BUT MY HEART BELONGS TO PORTUGAL.

IT WAS IN THE EUROPEAN COUNTRY THAT MY BEST MEMORIES HAVE THEIR ORIGINS.

PORTUGAL USED TO BE A MEDIUM NATIONAL TEAM, BUT THEY ARE NOW ONE OF THE BEST. TO PLAY FOR THEM? ONE HUNDRED PERCENT.”

We hope it has inspired you to believe that consistency conquers all, just like Pereira maintained his good run of form even while playing for relegation-threatened side FC Nürnberg.

Have you come across anything that doesn’t look right in this article? Let us know in the comment section.

We are grateful for reading our version of Matheus Pereira’s Biography and Childhood Story. At LifeBogger, we strive for accuracy and fairness in our quest to deliver you the Biography of Brazilian Footballers.

If you find something that doesn’t look right in Matheus Pereira’s Bio, please share it with us by commenting below. We’ll always value and respect your great ideas.