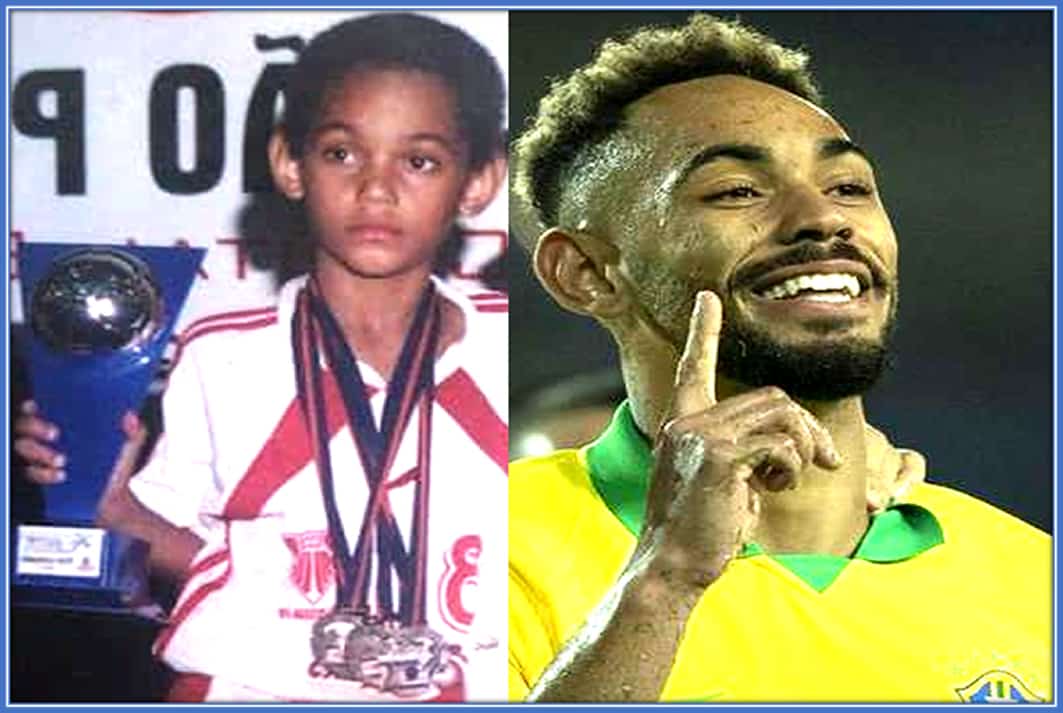 It is a concise presentation of Matheus Cunha’s life story from his early days, to when he became famous.

To give you a taste of the engaging nature of the bio, here is a pictorial summary of his life and career progression. Without a doubt, it perfectly introduces the Life journey and Story of the Brazilian striker.

Yes, everyone knows he is Hertha’s most auspicious player. However, few people have read his biography, which is quite engaging. Without further ado, let’s begin.

For starters of his Biography, his nickname is Mateo. Matheus Santos Carneiro da Cunha was born on the 27th day of May 1999 at João Pessoa in Brazil. He was born to his mother, Luziana Cunha, and to his father, Carmelo Cunha.

The son of Luziana and Carmelo is a full-blooded Brazilian. As a matter of fact, he has family roots established in the South American country, which is best known for its iconic carnival festival and talented soccer stars like Pelé and Ronaldo De Lima.

The João Pessoa native grew up in his birthplace, idolizing Ronaldinho and Podolski. Interestingly, he watched enough games for a lifetime as a kid and had a thing for playing Futsal.

Mateo’s parents were happy with his early football engagement. However, they ensured that it didn’t impede his development in other aspects of life.

The way the Cunha family figured it, an excellent education for Mateo and his sister Mariah were as important as development in soccer.

In addition, the middle-class family lived comfortably well and looked out for the best interests of Matheus Cunha and his sister. Indeed, the forward wasn’t lying when he noted that:

“I was a child who grew up with everything I needed, I lacked nothing.”

Contrary to widespread misinformation, the forward’s journey didn’t start at Coritiba. In fact, he began with the local club Cabo Branco.

Interestingly, It was a club his dad played for too! Thereafter, Cunha went to Recife-based club – CT Barão.

It wasn’t until the forward turned 14 that he joined Coritiba. Recalling how he arrived at the club, Cunha notes that:

“A businessman liked my football and together with my father, took me to Coritiba.”

While at the Parana-based club, Cunha spent four years rising through the ranks and lacing his boots in preparation for a career that would take him beyond the shores of Brazil.

Indeed, preparations paid off when representatives from the Swiss club, Sion took note of the forward’s talents and made contacts for his transfer.

“When my manager talked about the proposal and the possibility of starting my career in Europe, I didn’t think twice. in fact, I had a great desire to play in European football.”

Initially, settling down in a new continent was hard for the then 17-year-old. However, he was quick to adapt and began seeking stiffer competition.

In fact, Cunha spent just one year with Sion before joining Rb Leipzig in 2018.

Fortunately, Rb Leipzig has a philosophy of betting a lot on young people, and Mateo was no exception. They gave him a platform to prove himself, and he fared excellently well with beautiful goals to his credit.

In fact, his fantastic finish against Bayer Leverkusen in 2019 was the Bundesliga’s goal of the year 2020. Also, it was among the nominations for the FIFA Puskas award.

The beautiful year of 2020 also saw Matheus excelling with the Brazil U23 team. He, alongside Antony dos Santos, and Bruno Guimaraes, helped their country win the prestigious 2020 Summer Olympics.

At the time of writing this piece on Matheus Cunha’s childhood story and biography, the striker is with Hertha BSC where he continues his good run of form.

At the international scene, he succeeds for Brazil where strikers Firmino and Jesus have failed.

It goes without saying that he is an asset to club and country and would continue to work wonders. Whichever way things tilt for him, the rest, as they say, will be history.

Who is Matheus Cunha’s Girlfriend/Wife To be?

The striker is one of the few geniuses that win both on-field and outfield. He has a very beautiful girlfriend turned fiance. Her name is Gabriela Nogueira.

She is a native of Rio de Janeiro and works as a lawyer. Gabriela has been with Cunha as far as we can remember. In fact, she was one of those who helped him get settled when he arrived in Europe.

There are no questions about the realness of their love. They go everywhere and do virtually everything together.

They have a son – Levi born in 2020. Guess who got a marriage proposal for Christmas? Gabriela of course. It’s amazing that the striker plans to make her his wife.

The son of Luziana and Carmelo is no doubt loved for being an amazing footballer. However, there are just a few people who love him beyond what he does.

Carmelo Cunha is the name of the amazingly supportive dad. He hails from Paraíba. As was previously stated, he used to be a footballer. He also has a history of working as a teacher.

Cunha credits the amazing dad for always motivating and encouraging him. He is an ideal model of a father.

Luziana Cunha is the name of the striking maestro’s mom. She hails from Pernambuco in Brazil. In 2019, she was privileged to watch her son appear for the national team in Brazil.

Like every other member of Cunha’s family, she was happy to note that her son had a better rate among national team players. Cunha loves her very much, and they have wonderful memories together.

The striker has just one sister. She is his only sibling, and her name is Mariah. You must have seen her childhood photo with the striker above. They are very close and have each other best interests at heart.

Away from Mateo’s immediate family, not much is known about his extended family life. You must have spotted a photo of his grandmother and must be curious to know if she is his paternal or maternal grandmother. So are we.

In addition, we will love to have him tell us about his grandfathers, uncles, aunts, cousins, nephews, and nieces.

Who is Matheus Cunha away from the pitch? Does his life only revolve around playing on the shoulder of the last defender?

Sit back as we bring you facts about the forward to enable you to have a complete picture of him.

To begin with, Matheus Cunha is a merry-go-lucky chappy with just the right attitude. He has a positive outlook on every matter of life and radiates good vibes.

Also, the forward is not secretive. He is open to revealing facts about his personal and private life.

Like a ton of geniuses we’ve written about, Matheus loves swimming. He spends quality time at the beach and has made travelling his hobby.

You must have a mental picture of what is obtainable with such payments. It goes beyond having cars and houses in Germany and Brazil.

Cunha has all the aforementioned and must be at loss regarding what to do with all the money in his possession. Nonetheless, he understands life is meant to be enjoyed and doesn’t deny himself the pleasures of being alive.

We can’t help but admire photos of him sitting in private jets with his wife and kid as he shows them the world. He is evidently living the life of upper-class citizens, and we bear witness to all of it.

To wrap up this article on Mateo’s childhood story and biography, here are little-known or untold facts about him.

Since you started viewing Matheus Cunha’s Bio, this is what he has earned.

The forward is a Christian. Specifically, a practising Catholic. When asked if he had any Superstitions, Cunha replied that:

“Whenever I stepped into the pitch, I touch the grass and make the sign of the cross. Also, I kiss the tattoo of Mary, the mother of Jesus. They are all traces of my culture and religion.”

Cunha has an overall rating of 80 points with a potential of 87. While we might believe that it is an unfair rating, it is worthwhile to note that Roberto Firmino is 86/86.

At LifeBogger, we advise that there should be no comparisons between youngsters and superstars. However, we can’t help but admire the fact that Cunha is just a few points from equalizing his compatriot.

You must have observed that the forward nearly shares a resemblance with Neymar Jr in physique and skillsets. So have we. They are close pals, and we figure their relationship will grow stronger over the years.

When Cunha got his first call up to the senior national team, he was added to a WhatsApp group where he posted, “I’m happy to be here”. Neymar answered immediately, ‘Welcome!’ He will always feel welcome to play alongside the PSG superstar.

Thanks for reading this informative piece on Matheus Cunha’s childhood story and biography. We hope it has inspired you to believe that dreams and visions are achievable when backed with action.

Just like Cunha dreamt of playing in Europe and travelled several miles to achieve the dream.

It behoves us now to commend the forward’s parents for their support of his career in words and deeds.

At LifeBogger, we take pride in delivering childhood stories and biography facts with accuracy and fairness. If you see anything that doesn’t look right, do well to contact us or leave a message below.