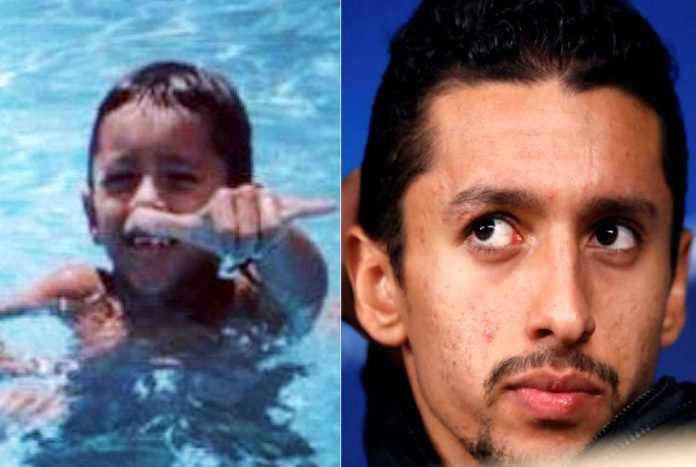 Lifebogger presents the Brazilian Full Story of a Football Genius, who is best known as “Marquinhos“.

Our Marquinhos Childhood Story plus Untold Biography Facts bring to you a full account of notable events from his childhood time to date.

Yes, everyone knows of his work rate and efficient one-on-one defending. However, only a few consider Marquinhos’ Biography, which is quite interesting. Now without further ado, let’s Begin.

For starters of his Biography, Marquinhos (christened Marcos Aoás Corrêa) was born on the 14th day of May 1994 at São Paulo, Brazil. He was born to his mother, Alina Aoás, and to his father, Marcos Barros Corrêa.

Young Marquinhos was raised in the municipal city of São Paulo which is best known as the capital of Brazilian soccer.

The sport has for decades established itself in the lifestyle of the city’s inhabitants including Marquinhos’ mum who watched matches at Arena Corinthians even while she was pregnant with the football prodigy.

It is, therefore, not surprising that Baby Marquinhos began playing football as soon as he could walk.

Growing up in a middle-class family alongside his elder brother Luan Aoás and sister Riama Aoás, Marquinhos was drawn to football.

The reason was not to necessarily meet his family’s future financial needs but fulfil what he recognized early as life’s purpose. Little wonder an established Marquinhos would decades later remark that:

Since I was young, I have always wanted to be a football player. I have worked hard to get to where I am today, I have defended great clubs and will give the best of myself, with strength and envy. The future has no limits; I will always go further.

While Marquinhos grew up in São Paulo, he had a famous cousin, Moreno Aoas Vidal who was at the time, a budding player with the youth systems of São Paulo’s major football team – Corinthians.

It was Moreno’s progress at Corinthians that inspired Marquinhos and his older brother Luna to also join the youth system of the club when the former was only aged 8.

It would be interesting to note that Marquinhos has not always been a defender.

The football genius started out by alternating between goalkeeping and serving in the capacity of a defender while studying at Salesian College of Santa Teresinha in São Paulo, before joining Corinthians in 2002.

“He was very fond of serving as a goalkeeper. He also played as a defender, but whenever he decided to serve as a goalkeeper, he was always chosen as the first choice for the job”.

More interesting is the fact that Marquinhos was considered by his parents and coach to be the least talented among the sporting brothers (Luna and cousin Moreno).

He, however, discovered and developed skills while building a career at the youth systems of Corinthians.

The Brazilian’s rise through the ranks of Corinthians reached greater heights beginning in 2011.

This was a time he was part and parcel of young Brazilian internationals that won the 2011 South American under-17 Football Championship. Also part of the team that qualified for the FIFA under 17 World Cup. 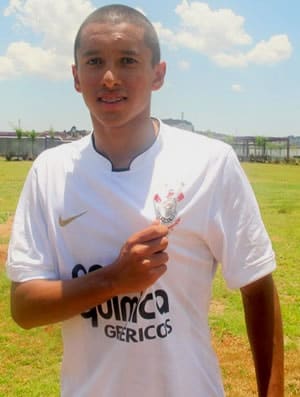 Subsequent engagements with Corinthians saw Marquinhos make his debut with the club’s first team on the 18th of February 2012 and thereafter, recorded a few appearances in Campeonato Brasileiro Série A and 2012 Copa Libertadores campaigns.

Credited with good track records for Corinthians and Brazil’s national teams, Marquinhos was in late 2012 sold to Roma where he had 26 Serie A actions with 4 Coppa Italia appearances before earning a move to Paris Saint Germain. 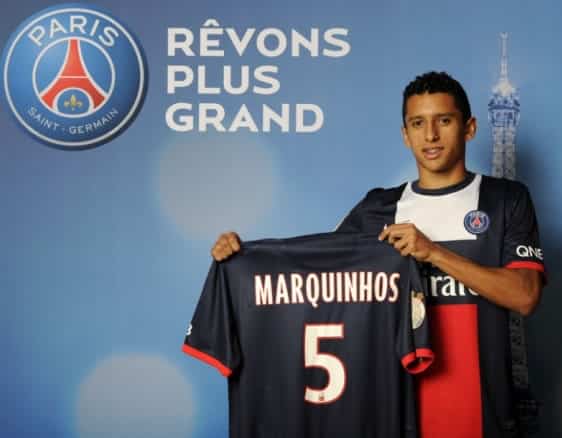 PSG offered a brave new world of opportunities to Marquinhos, who was seemingly destined to succeed, as he scored his first professional goal for the club on his official debut during PSG’s 4-1 victory over Olympiacos in September 2013.

A few days later, Marquinhos consolidated his early impressions by scoring his first league goal in a 3–0 Champions League group victory against Benfica. The rest, as they say, is history. 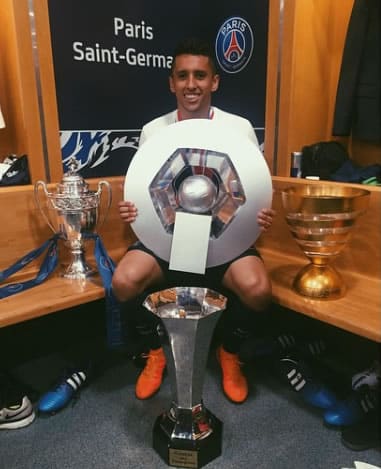 Marquinhos is a married man. This section of his Biography brings you factual details about his marital life, including how he met and married his wife Carol Cabrino.

To start with, Marquinhos’ wife Cabrino is not and wasn’t even a fan of football. She is rather a fitness enthusiast who pursued a career in singing and often recorded appearances at karaoke halls around Brazil.

It was during one of such pursuits that she appeared on a Brazilian version of X-Factor called Jovens Talentos in 2014. Her performance on the reality Tv show caught the attention of Marquinhos, who quickly added her on Facebook.

“He added me on Facebook; he wrote to me every day, he commented on my photos.”

She revealed to Canal +.

The duo began dating afterwards and got married on the 2nd of July 2016. The ceremony was held at a beach in Trancoso. 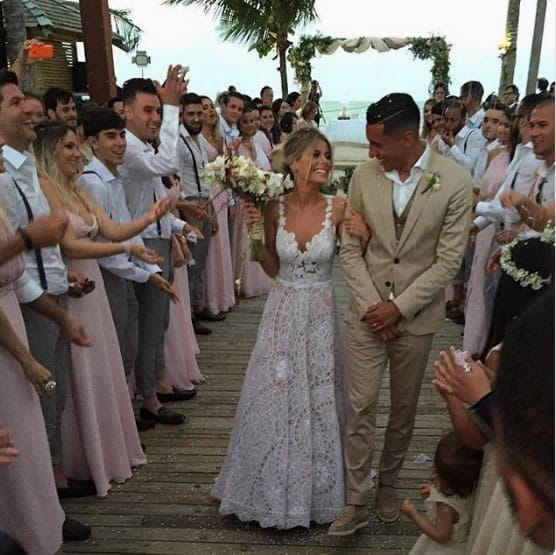 Their marriage is blessed with a daughter, Maria Eduarda Cabrino Correa, born on the 1st day of November 2018.

It is worthwhile to note that Cabrino went into labour for the birth of their daughter while she was at the Parc des Princes stadium in France to watch Marquinhos play a Champions League match against Anderlecht.

Marquinhos was born into a sports-loving family of 5. We bring you factual details about members of his family.

Marquinhos’ dad is no other person but Marcos Barros Corrêa. Marcos is everything to Marquinhos, who regards him as his hero, mentor, partner, friend, among other qualities of an excellent father figure.

Alina Aoás is the loving and caring mom whose beautiful praises are sung by Marquinhos in the following manner:

Your sensitive eyes harden when I need a lesson.

And your strength and love have led me through life and gave me the wings I needed to fly My queen”.

First of Marquinhos’ siblings is his older brother Luan Aoás. The duo grew up together, sharing common interests in football.

Fate, however, decided that Marquinhos would surpass his brother in the sport. Nonetheless, they are extremely close, with Marquinhos describing Luan as the best brother he could ever ask for.

Marquinhos’ only sister is the lovely Riama Aoás. A woman whom he treats like a princess after his queen mother.

What do the activities of an average day look like in the life of Marquinhos? A man who has been described by friends as focused with a very disciplined personality.

For starters, Marquinhos loves spending quality time with family whenever he gets an opportunity to do so, especially with his daughter, who is growing fast.

Away from spending time with family, Marquinhos loves playing video games and working out at gyms. The activities, combined, help him develop tactics and stamina, which makes up for what he lacks in height as a defender.

Moving on to lesser-known facts about Marquinhos, the football genius has a tattoo on his left foot.

The body art, which depicts two tightly clenched palms, is described as Eternal Brotherhood by Marquinhos. It reflects his appreciation for loyalty and support to family and friends.

Above all, Marquinhos is a religious Christian who believes that the most powerful force in the universe is Faith! 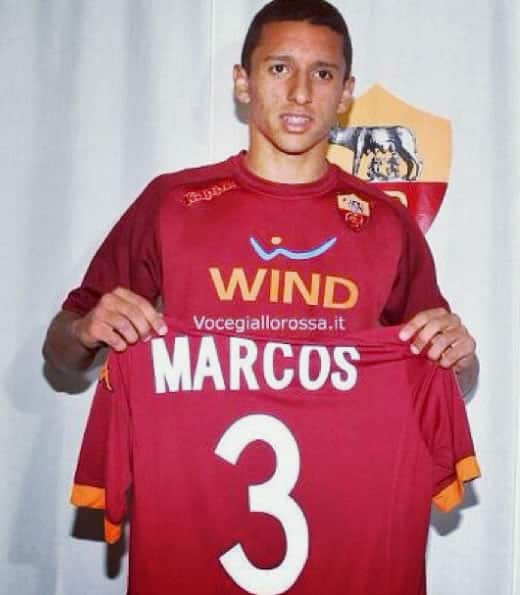 Analysis of his €31.4 million transfer fee to PSG got top media outlets confused as they dished out varying breakdowns.

BBC Sport claimed it was the highest transfer fee for a teenager at the time. While Sky Sports reported it as the fifth-highest of such transfer.

Similarly, France’s Le 10 Sport recorded it as the third-highest. While French news channel BFM TV described it as the fifth most expensive of all time for a defender.

Marquinhos enjoys a close relationship with Thiago Silva, whom he has often been compared with and, in some cases, referred to as a “little Thiago Silva”.

Beyond the comparisons, Marquinhos considers Thiago as his role model. And it is evident that they both enjoy a solid understanding at Paris Saint-Germain. 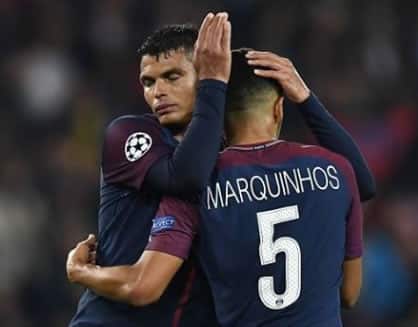 LifeBogger appreciates you taking the time to read our version of Marquinhos’ Biography.

We care about accuracy and fairness in our collective quest to deliver you South American Football Stories. Marquinhos’ Bio is a product of LifeBogger’s Brazilian football Story collection.

Please reach out to us (via comment) if you notice anything that doesn’t look right as you read Marquinhos’ History. Don’t forget to stay tuned for more Football Stories as they cut across LifeBogger categories.

The Childhood Stories of Anthony Contreras, Everton Soares and Alex Sandro would interest you. Finally, kindly give us your honest feedback about Marquinhos and his amazing Bio.

I love the article! Although there are some things that you missed out.

He also has 2 other younger sisters, Emily and Rai.

And now he has another son, Enrico, but I do understand that this was made before he was born so it’s fine that it’s not there.