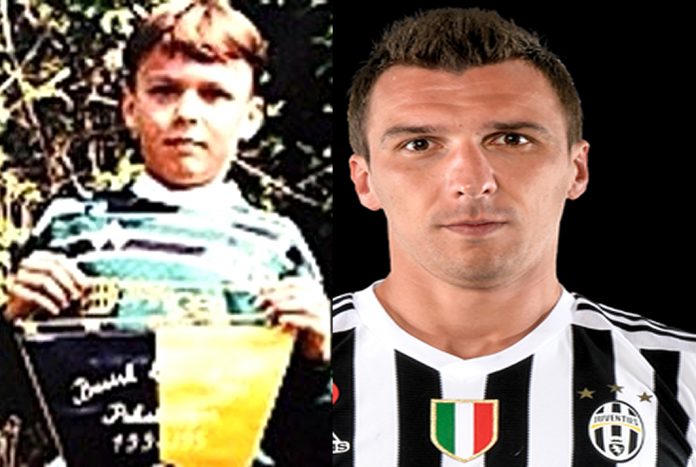 Lifebogger presents the Full Story of a Football Genius who is best known by the nickname; “Mandzu“.

Our Mario Mandzukic Childhood Story plus Untold Biography Facts brings to you a full account of notable events from his childhood time to date.

Yes, everyone knows his aerial prowess, physical strength and tactical intelligence in the field of play.

However, only a hand few fans know much about Mario Mandzukic’s Bio which is quite interesting. Now, without further ado, let’s Begin.

The Forward, Mario Mandžukić, was born on the 21st day of May 1986 to his mother, Jelica Mandžukić and father, Mato Mandžukić, in the Croatian city of Slavonski Brod, SFR Yugoslavia.

Mario Mandzukic’s childhood story is interesting, if not uncommon—it’s that of the troubled child who fled his war-torn country and later became blessed with extraordinary talent.

Mandzukic grew up spending lots of time with his sister, Ivana, and Nephew Marino Maslov. Growing up, what mattered to Mario’s family was the safety of their lives.

This was because his city of residence, Slavonski Brod lying directly on the border with Bosnia, came under immediate danger and attack after the outbreak of the Bosnian war in 1992.

This sad event prompted a decision from Mandzukic’s father, Mato, to flee the country with his family.

“The only thing that mattered to me was my family’s safety.

There were people being killed in outside our front door.

We couldn’t stay there any longer,”

After fleeing their country, Mario’s family ended up in Ditzingen, near Stuttgart (Germany).

It was in Germany Mario found enthusiasm and talent for football. His German school gave him the opportunity to play competitive football.

As seen in the photo below, the town of Ditzingen became a golden place for Mario, a place he found new friends, true happiness and, most importantly, solace away from the troubled reality of his war-torn country.

Mandzukic’s passion for football saw him enrol on the roster of a local youth team, TSF Ditzingen who gave him the stage to showcase his talents. Pictured below, he was 6 at that time.

As Mario joined local outfit TSF Ditzingen, so did his father, who was a defender by trade for the club’s senior team. However, Mario’s father had a brief spell at the club and career at large.

The Disappointment: In 1996, Mario’s family received a shocker. They were denied permission to extend their stay in Germany.

This made his family return to Yugoslavia, where hostilities had, fortunately, come to an end.

Mandzukic continued his footballing progression in his homeland at NK Marsonia where he grew above all youth footballing ranks.

This feat led to him moving to Croatia’s capital to play first for NK Zagreb and, subsequently the city’s powerhouse club Dinamo Zagreb.

After scoring 52 goals in 110 games for Dinamo, scouts from across Europe were interested in poaching the powerful striker. 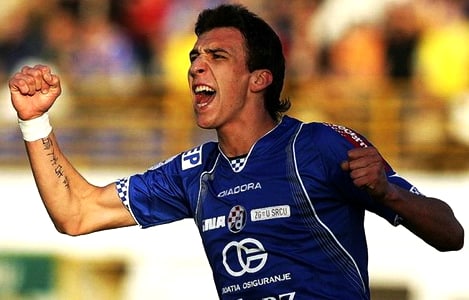 Germany remained his preferred destination. Having spent four years as a child in the country made Mandzukic feel especially settled in Germany.

Werder Bremen came close to sealing a deal, but it was VfL Wolfsburg that won the race for his signature in the summer of 2010. The rest, as they say, is now history.

This article is uniquely important to the dichotomy between the players’ personalities on the pitch and their real-life exploits.

Mandzukic leads a rather quiet life away from football, and knowing more about his relationship life will help you build a complete picture of him.

Away from the media spotlight, Mario spends lots of time with his girlfriend, Ivana.

Though the couple isn’t into taking pictures together, it’s believed they have been living together for a while.

Apparently, Ivana doesn’t have any type of social media account, and even when her man does have an active Twitter and Instagram account, she agrees not to be featured in it. Weird yes! but if Ivana doesn’t care, then why should we, right?

According to Story, Ivana was once a student in Polish University and has been dating Mario for years now.

Mandzukic is one of few footballers who has given a blatant display of public affection by getting two names meant for his girlfriend and a dog stitched into his boots.

Below is a photo of one of his boots showing Ivana, and Leni inscribed on it. 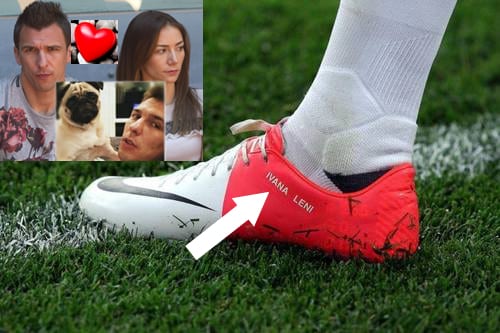 Leni, Mario’s dog, is as smart as a 2-year-old toddler and does have a sense of time. Leni could smell Mario’s feelings and misses him when he goes on football commitments. 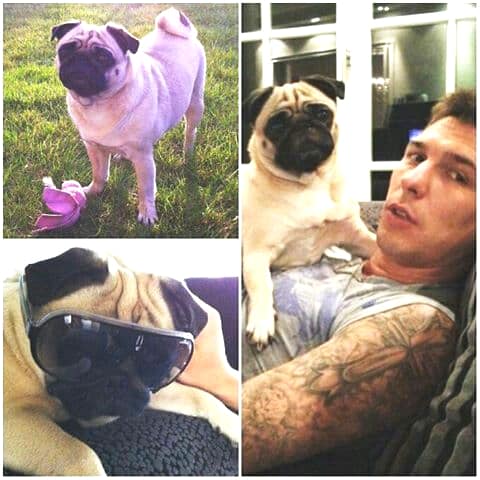 Mario once said he would rather stay at home with Leni than go to training. 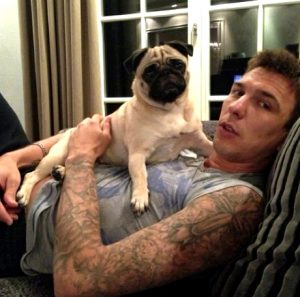 He sometimes leaves a piece of his clothing that smells like him with Leni if he has to go away. The scent of his cloth comforts Leni and it helps curb his separation anxiety.

The name ‘Ivana’ is not to be confused with Mario Mandzukic’s girlfriend, who bears the same name as his older sister.

Mario’s sister lives in Germany and often travels to watch her brother playback than when he played in the country.

Ivana works in a bakery store, and she is able to speak German thanks to finishing her studies in Germany. Being his only sister, Mario Mandzukic is very close to Ivana and her only child. 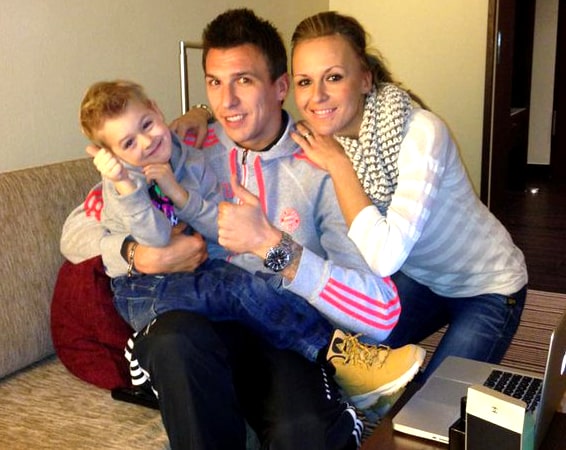 Speaking about Mario Mandzukic’s parents, Mato and Jelica keeps their private life extremely private. When asked for interviews, they don’t give details.

It is fair to say that Mario Mandzukic isn’t the most gregarious of characters. He is renowned for being a bit aloof and short-tempered. He is a spiky character who doesn’t show kindness to the Press who stalk him.

An incident once happened to the press surrounding his car after his training. In order to get one journalist off his back, he ironically invited him into his car, as if to say ‘You’re so close, you might as well get in’. 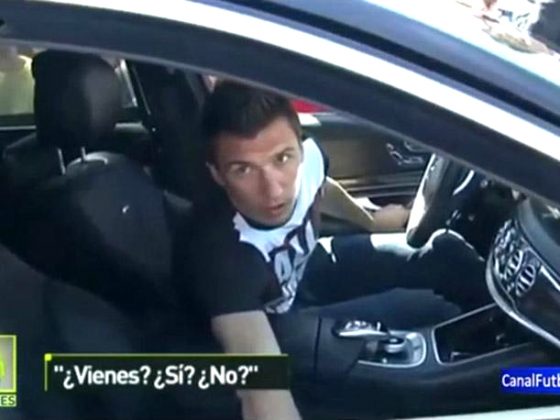 What happened? Mario Mandzukic was signing some autographs for fans when a journalist and his cameraman filmed from the other door of his luxurious car.

This act made him upset, thus lowering his window to invite to pass to unwillingly take themselves to the car. He did not do it once but repeatedly.

The journalists only looked at him and held their feelings and did not want to be provoked. They just continued filming everything.

The Baller claims what he does with his free time would bore everyone. In the real sense, he’s a trained ceramic tiler and a game freak. He also plays tennis. 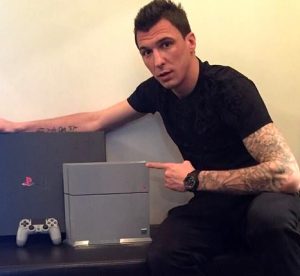 Mario’s clash with Pep Guardiola at Bayern was believed to be a major factor in his departure from the Bundesliga. 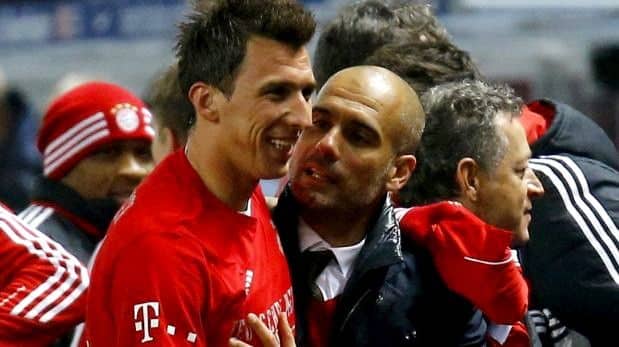 Pep accused him of disobedience and caring less about instructions given to him.

After leaving Pep, he went to play for Diego Simeone‘s side.

Unfortunately, Diego Simeone only allowed Mario to play 28 games at Atletico Madrid before allowing him to leave the club, claiming, “He behaviour annoys him easily”. 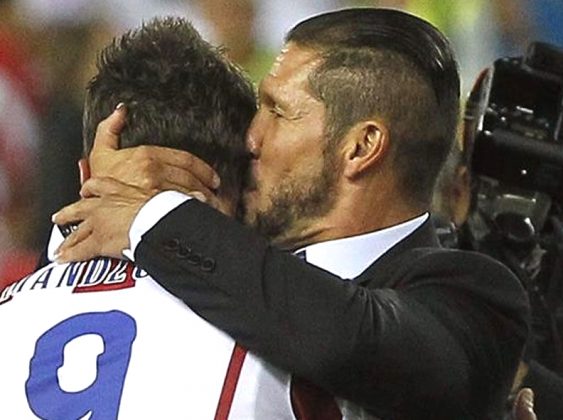 Mandzukic has won the Croatian Footballer of the Year award twice, in 2012 and 2013, seeing off competition from Luka Modric.

Thanks for reading our Mario Mandzukic Childhood Story, plus untold biography facts.

LifeBogger strives for accuracy and fairness in our quest to deliver Croatian Football Stories. The Life History of Josko Gvardiol and Nikola Vlasic will excite you.