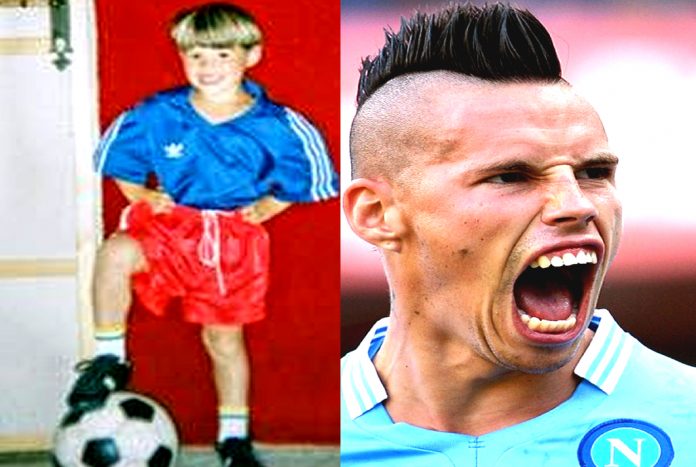 LifeBogger presents the Full Story of a Football Genius best known with the nickname “Marekiaro“.

Our Marek Hamsik Childhood Story plus Untold Biography Facts brings to you a full account of notable events from his childhood time to date.

Yes, everyone knows of his goal scoring and assist capabilities. And his loyalty to one club – similar to Claudio Marchisio, Sergio Busquets and Ciro Immobile.

However, only a few consider our Marek Hamsik’s Biography, which is quite interesting. Now without further ado, let’s Begin.

Starting off, Marek Hamsik was born on the 27th day of July 1987 at Banska Bystrica, Slovakia. He was born to his mother, Renata Hamsik, and to his father, Richard Hamsik. 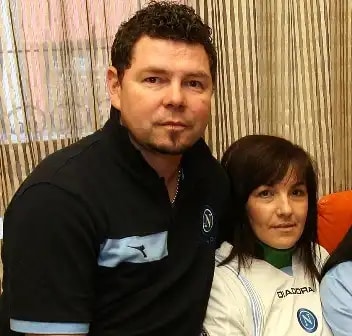 Growing up in Banska Bystrica (pictured below), a town is best known for its Mining significance and Historical edifices, young Oblak was surrounded with love from his sports-loving family who helped set him on his career path early in life. 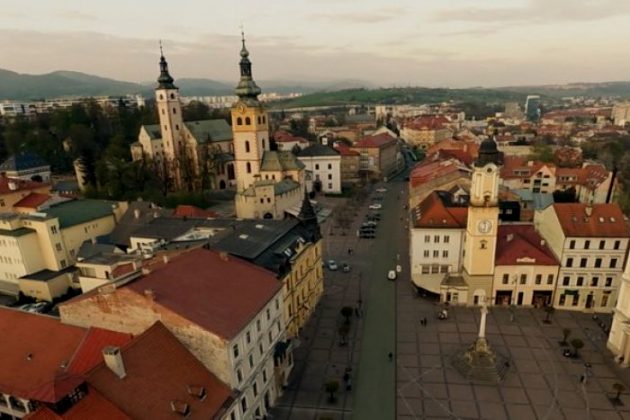 Hamsik’s Mother was a one-time handball player while his father was the captain of Slovakia’s five-a-side team at the time of the football genius birth.

To make the sporting family complete, Hamsik’s sister Michaela was a handball player who played for their hometown team, Banská Bystrica.

It was only natural for Hamsik who was much influenced by his father to consider a career in professional football.

Backed with the Technical Know-How of his father, Hamsik took his first big steps towards professionalism. In an unconventional way. By getting enrolled at a small youth team, Jupie Podlavice instead of starting off from his hometown’s local team, Dukla Banská Bystrica.

Notable among which was Slovan Bratislava, a club Hamsik progressed to in 2002 under sacrificial circumstances as he would recall years later:

‘I owe everything to my parents. Although we weren’t a rich family, my parents went at lengths to support me including selling the only car we had so that i could join Slovan Bratislava when i was aged 14.’ 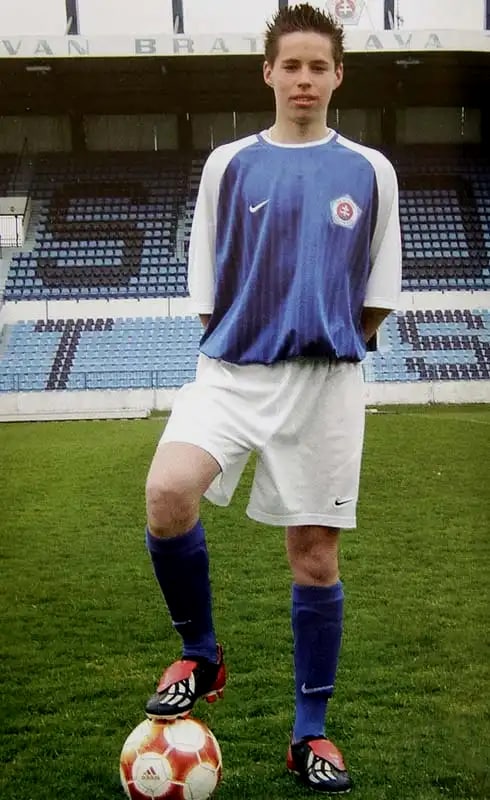 Hamsik was not one to make light of his parents’ sacrifices as he did all within his capacity to make the most out of his six times appearances for Slovan before his transfer to Italian Club Brescia in 2004.

Starting with the club’s under 19’s, Hamsik pulled off a meteoric rise. Through the ranks to make his Serie A debut in 2005. But gained little recognition as Brescia as Brescia failed to avoid relegation that year. 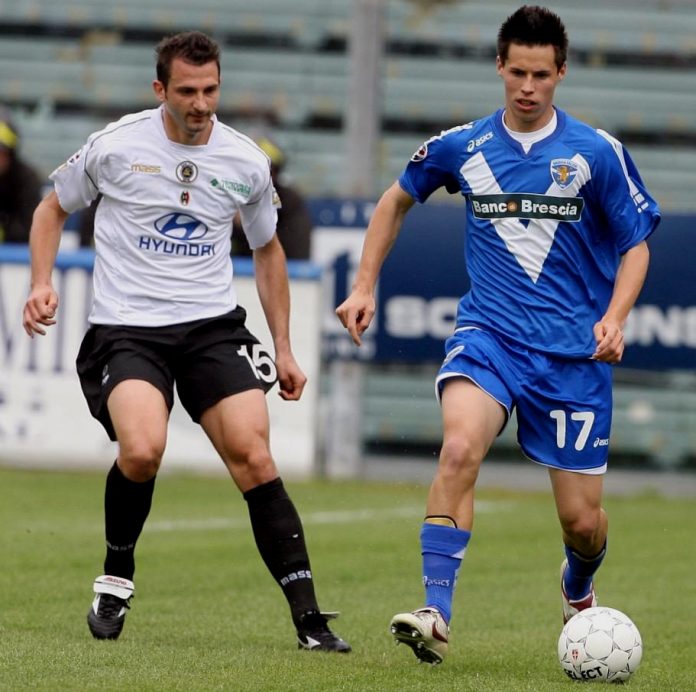 However, Hamsik continued with his Top form which saw Napoli bid for him after he recorded Ten goals in 40 Serie B appearances.

It was Napoli that Hamsik got deserved attention. Which started right after he scored on his debut against Cesena in the Coppa Italia. 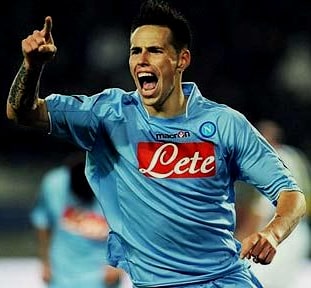 It wasn’t long before Hamsik received the best young player award in Serie A known as ‘Oscar del Calcio’ in January 2009.

The award was the first of its kind to be conferred on a player without Italian roots. The rest, as they say, is history. 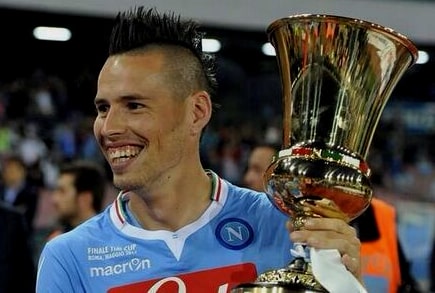 One who thinks of the repetitive patterns of career and relationship choices that run in a family would not be far from studying the life of Hamsik.

He trod the paths of his father (an ex-football captain). By dating and getting married to a handball player. Remember, this is the same sport that Hamsik’s mother was actively involved in.

Hamsik had been in a long-term relationship with his girlfriend or wag turned wife, Martina Franova. 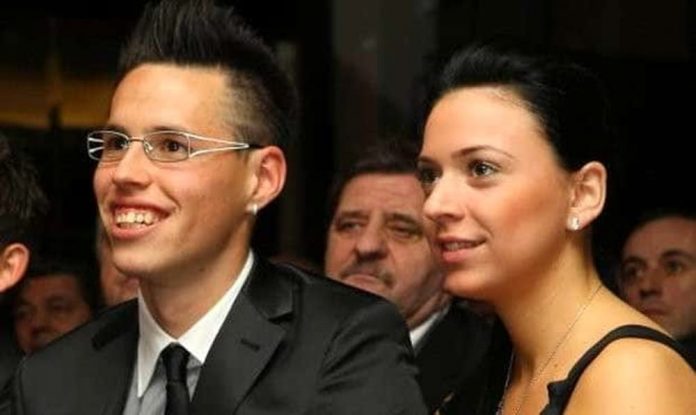 Martina Franova was a handball player who played for their hometown team, Banská Bystrica alongside Hamsik’s sister, Michaela.

The couple’s relationship sparked off while Hamsik was at Brescia and has blossomed ever since. 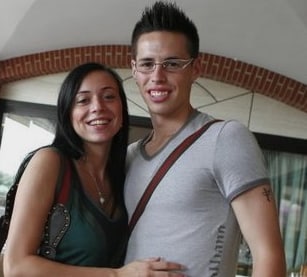 The couple dated for years before getting married on the 4th of July 2014. 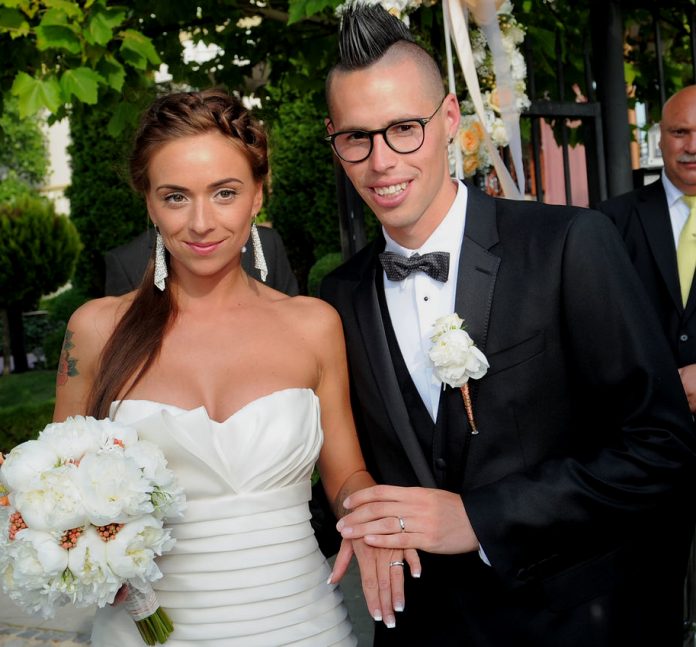 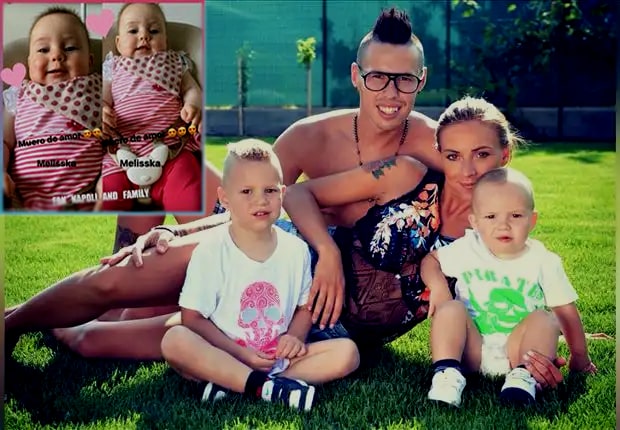 While The two sons have kick-started their career in football at an academy affiliated to Udinese, fans can’t wait to see if Melissa would maintain the sporting pattern of the family by playing handball.

In November 2011, Hamsik’s pregnant wife, Martina Franova, was robbed at gunpoint, dispossessed of her valuables and also left stranded in Naples after robbers left in the BMW she was riding. 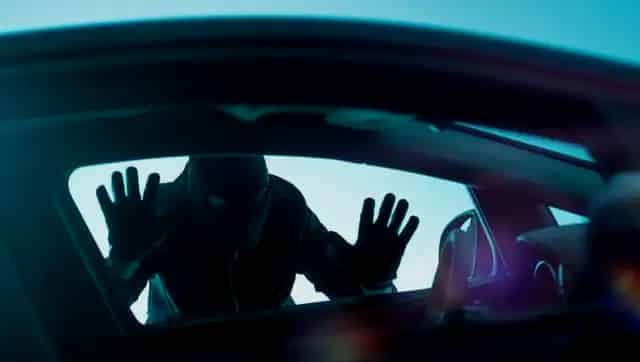 The incident which occurred hours before Napoli’s Champions League match against Manchester City did nothing to distract Hamsik, who played the match with full concentration.

Fast forward to 2013, Hamsik was robbed while driving in the aftermath of Napoli’s goalless draw against Sampdoria.

The robbers reportedly stopped and smashed the glass of Hamsik’s car before brandishing a gun in his face. 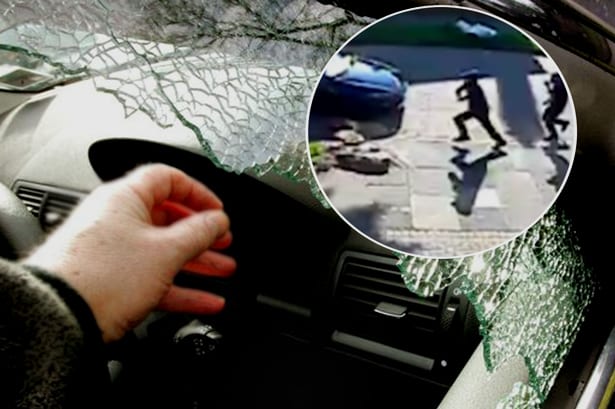 Hamsik was left with no choice but to oblige to their demands as they made away with his wristwatch among other valuables.

Hamsik decided to remain despite advances made by English clubs to sign him. And robberies incidents against him and his pregnant wife.

As a result, Hamsik is celebrated as a modern-born hero of Napoli just after Diego Maradona whose scoring records in Napoli have been surpassed by the loyal genius. 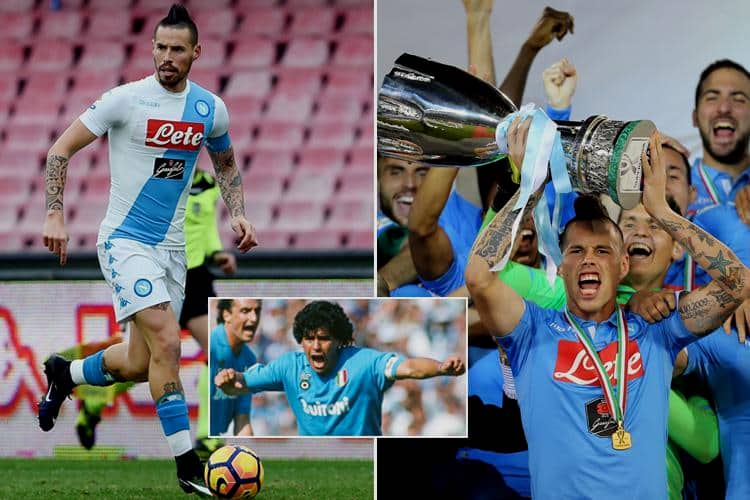 Not Just A Shirt Number:

The shirt number 17 has become a major Identity of Hamsik. Who appears donned in kits carrying the number during appearances for both Napoli and Slovakia’s National Team.

According to the skipper, the later figure of number 17 plays a recurrent role in his birth dates and time. A fact he revealed during an interview with newsmen. 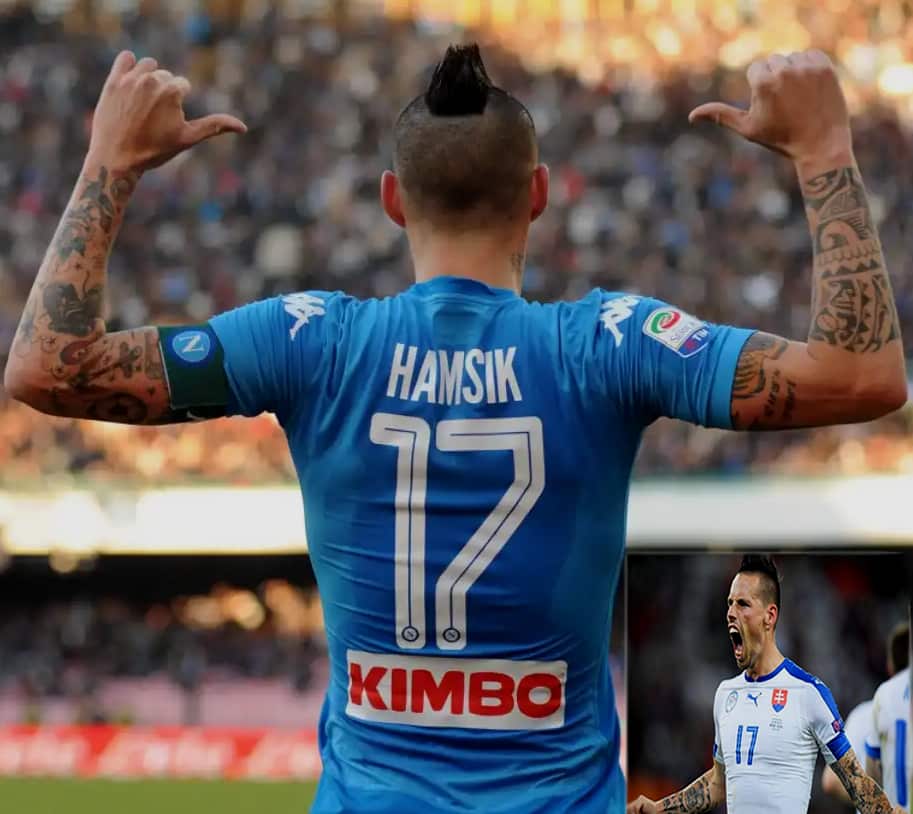 Hamsik’s Nickname, ‘Marekiaro’ is culled from part of his first name ‘Marke’. While the other word “kiaro” pays tribute to the clean sea waters surrounding Napoli which Neapolitans love so much.

On the field of play, he has been described to anything. Be it quick, energetic, hard-working, and tactically intelligent midfielder. A baler who is capable of playing in several offensive positions.

His energy, creativity and especially his leadership skills have seen him serve as the captain. A captain of his Italian club Napoli. As well as serving as the vice-captain of the Slovakia national team. 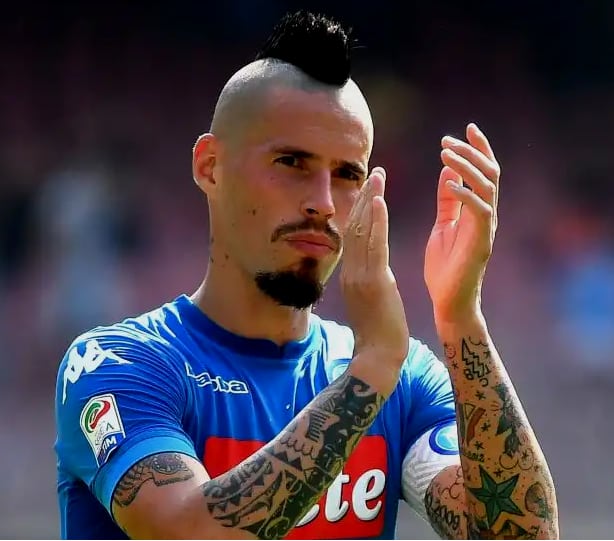 In addition, His emotional intelligence coupled with the aura of comic relief that accompanies him are traits that have made him stand out among other players and made him seem “irreplaceable” wherever he goes. 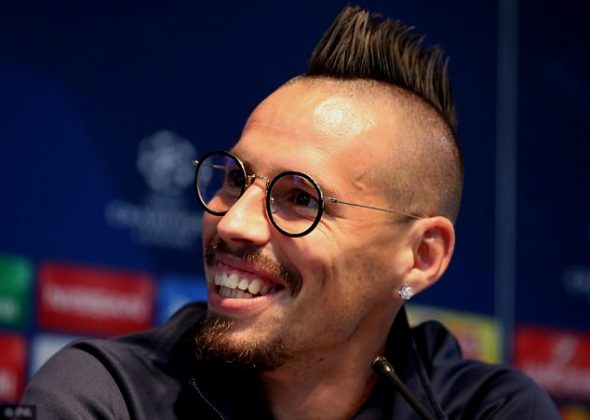 FACT CHECK: Thanks for reading our Marek Hamsík Childhood Story plus untold biography facts. At LifeBogger, we strive for accuracy and fairness. If you see something that doesn’t look right in this article, please place your comment or contact us!.

The nickname “Marekiaro” has to do with a small part of the city of Naples called Marechiaro. It is a little area by the water where one can view the whole city of Naples, including Mt. Vesuvius. It is beautiful and Marek Hamsik has been given the nickname “Marekiaro” because over the years he has been the symbol of our city and team. Such a nickname is a big compliment, and Hamsik knows that and admires it. For more information, research Marechiaro, Posillipo, Naples.