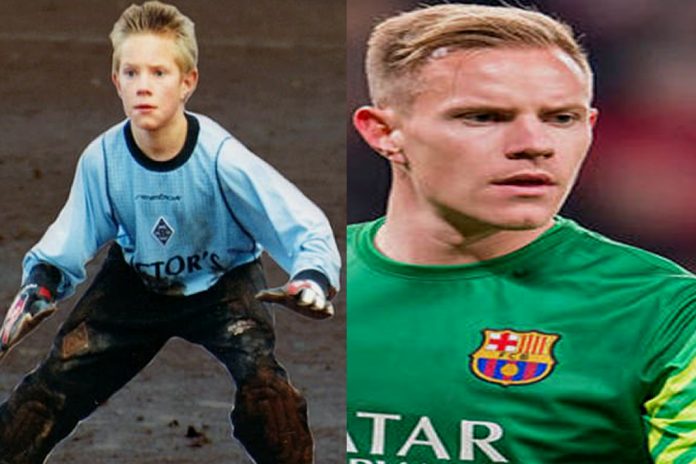 LB presents the Full Story of a Goal Keeper who is best known by the nickname; “Messi with gloves“.

Our Marc-Andre ter Stegen Childhood Story plus Untold Biography Facts brings to you a full account of notable events from his childhood time to date.

The analysis of the FC Barcelona Goalkeeping Legend involves his life story before fame, family life and many OFF-Pitch facts little known about him.

Yes, everyone knows about his quick reflexes. However, only a hand few fans know much about ter Stegen’s Bio which is quite interesting. Now without further adieu, let’s Begin.

Marc-André ter Stegen was born on the 30th day of April 1992 in Mönchengladbach (Germany). He was born in a Catholic home, to his mother, Renate Kausa and father, Erich Kaus.

His surname, ter Stegen, is these days not common in Germany but owes its origin to his Dutch ancestry. Ter Stegen grew up with his only brother, Jean-Marcel ter Stegen.

At the tender age of 2, Ter Stegen started playing football with his elder brother near their house between garages.

At the age of three, he has already learned early moves in the game. This new feat made his granddad accompanied by his parents to enrol him on the roster of a local youth team who gave him the stage to showcase his newly discovered talent.

As ter Stegen puts it;

“My Granddad was a lot, like my mother and father. They all took me to training; it didn’t matter if it rained or snowed. They never got into day-to-day football, because in the end, the coach decides if you play. They never pressured me and that helped me a lot.”

What motivated ter Stegen to be a goalkeeper 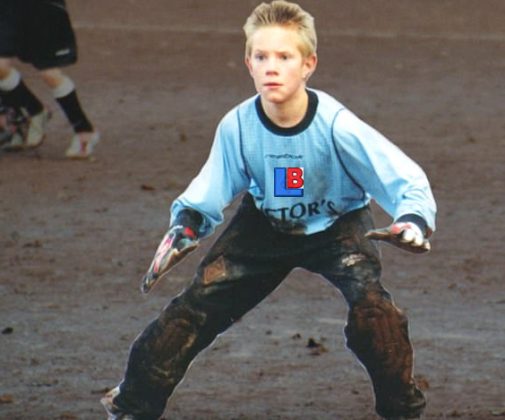 Back then, ter Stegen’s objectives were to score many goals until he changed his mind.

It is important to note that one of his coaches motivated him to volunteer for the goalkeeping position because he did not like the way ter Stegen ran while he played in the middle of the field.

“I started to like how everyone treated me as a goalkeeper. They always told me ‘you did pretty well.’ Since that moment, I never left the goal post. I’m happy with my journey.”

Marc-Andre ter Stegen left his local club at the age of 5 after his parents successfully enrolled him into Borussia Mönchengladbach’s youth academy which is located at the heart of his hometown.

Just like Marcus Rashford, Ter Stegen became very much loved by local Monchengladbach fans who saw him as one of their very own. 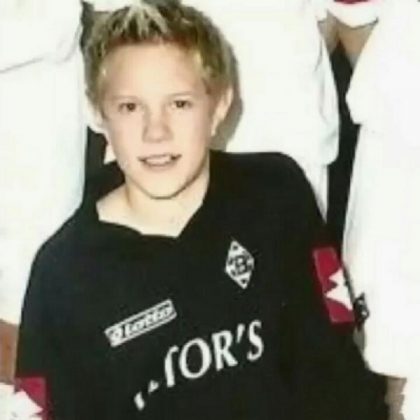 Ter Stegen spent a whopping 14 years (1996 to 2010) at the youth academy, outgrowing all goalkeeping ranks before being promoted to the club’s senior team. 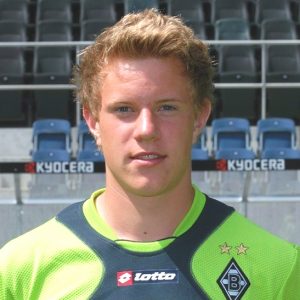 His senior career started in 2010 also at his hometown club, Borussia Mönchengladbach.

That same season, he established himself as the next best goal-keeper in line after his team’s first choice.

Whilst he was enjoying a relatively successful season, the same could not be said for his first-team colleagues who battled for regulation. 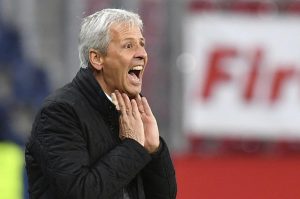 While the senior side was seemingly failing in their efforts to avoid relegation, their manager Michael Frontzeck was replaced by Lucien Favre who instilled more discipline to the team that saw result improved.

Despite result improvement, someone in the team had a nasty behavioural attitude which costs the team. It came from their first-choice goalkeeper Logan Bailly as he held the team back.

The fans of Mönchengladbach were quick to discredit the Belgian international, with some accusing him of putting more effort into his modelling career than his football. 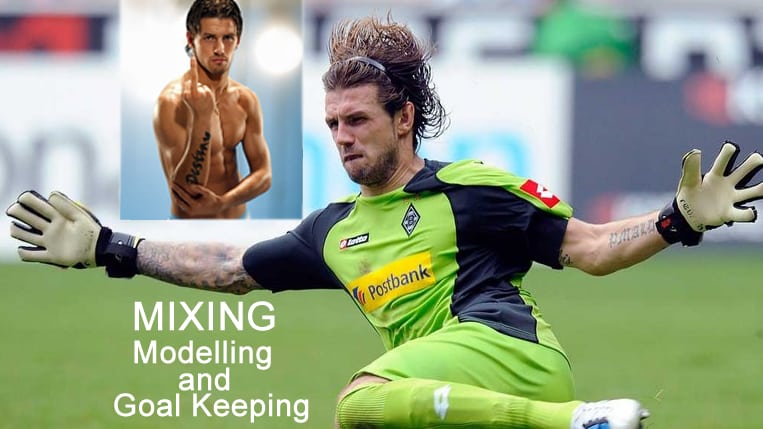 However, Ter Stegen’s progress for the reserve team had not gone unnoticed by the supporters. The new manager was pressured to start the young prodigy in the league.

Patience was totally lost with Bailly which saw him relegated to the bench in favour of ter Stegen.

The young German did not disappoint, he made the defence to be boasted with an unseen solidity. Keeping enough clean sheets, his team got saved from relegation. 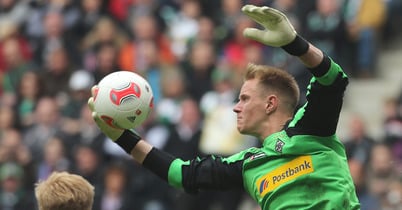 FC Barcelona scouts who were looking for a Victor Valdes replacement noticed his dominance after his continuous strings of world-class saves for his club.

On 19 May 2014, ter Stegen was announced as the new goalkeeper of Spanish club Barcelona, after the departures of Víctor Valdés and José Manuel Pinto.

At FC Barcelona, his displays earned him a reputation as one of Europe’s finest. The rest, as they say, is now history.

Behind every great man, there’s a great woman, or so the saying goes. And behind almost every German goalkeeper, there’s a glamorous wife or girlfriend.

Mar-Andre ter Stegen has a Love Life. Daniela Jehle is the former girlfriend and present wife of Ter Stegen.

Both started their relationship as teenagers which took them from best friend status to true love as pictured below. 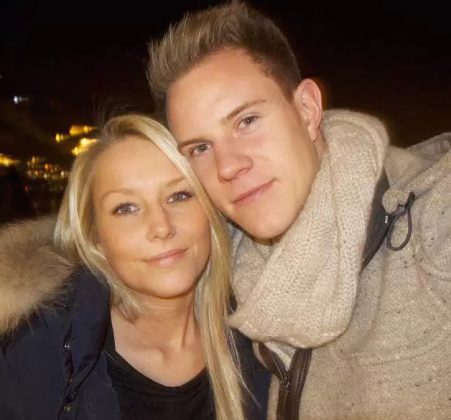 The Dutch beauty had her high school in San Diego, California. Because of her lover (Ter Stegen, she decided to continue her university education (architecture studies) in Barcelona. 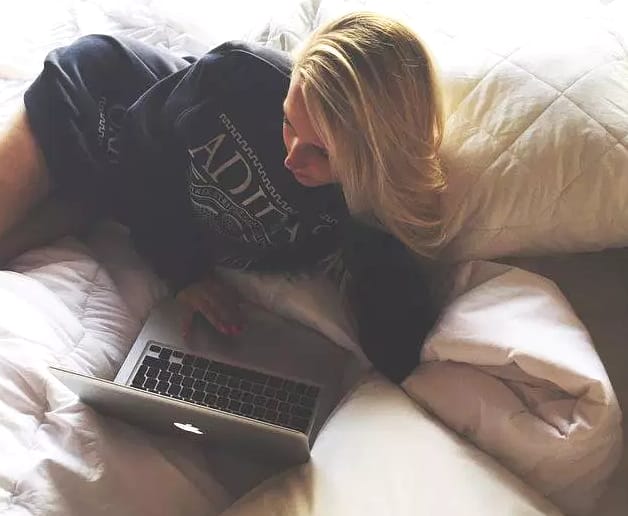 Marc-Andre ter Stegen and girlfriend Daniela Jehle in 2017 had a small wedding ceremony near Barcelona.

Shot-stopper ter Stegen proved he is a proper keeper by tying the knot after dating OR keeping the Dutch beauty for five years. 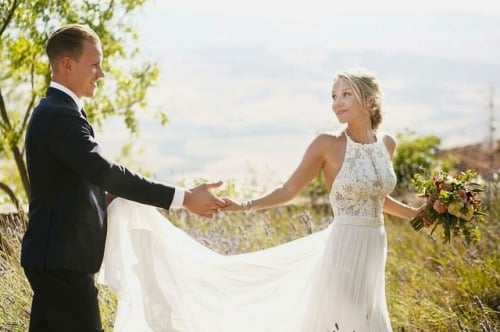 Jehle and ter Stegen have a dog named Bali who went missing on Christmas 2012 but was found. Bali keeps Daniela Jehle relaxed when her man is off for training or to play for his club. 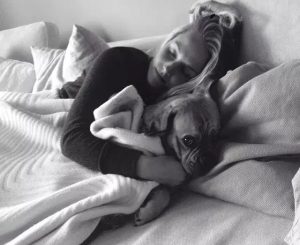 Q: Is it true that one of your coaches did not like the way you ran and that caused you to become a goalkeeper?

A: Ter Stegen smiles and responds;

“Yes, it seems strange, but it’s true. It was very hard for me to accept it at first, but it was the best decision I made in my life. He said he just didn’t like the way I ran. I just tried to focus on being good as a goalkeeper.”

Q: Valdés and Mascherano once said rather than enjoying football, they’ve been suffering. Do you ever have bad times?

“I enjoy what I do, 100%. Each person is different, but I love what I do on the field. I have companions that I get along with well and they allow me to easily play with them. That allows me to play as I like. That’s why I’m here; I love football. I have excellent teammates. For me, there’s no way you can’t enjoy football.”

Q: The GK is prone to making the most errors. What do you do to overcome mistakes and how do you manage them mentally?

“Making mistakes is something a human does, that’s why I treat it that way. In the end, we all fail. There are always things that can be improved. I always try to avoid failures. Mistakes are concepts. If mistakes are a concept of failure, it is different from a failure that comes because you have taken too many risks; you can avoid mistakes.”

Q: How do you cope with pressure?

“Each person has a different personality. For me, I like to talk to people. When I’m at home, I like to talk with my wife. She doesn’t really care about football, but she’s really close to me and that helps me a lot.”

Q: You always mention Oliver Kahn as one of your influences. Why? 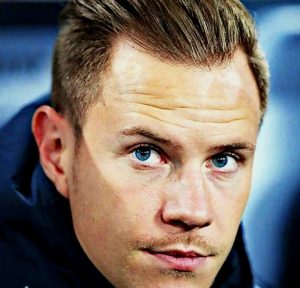 His supportive parents, Renate Kaus and Erich Kaus made Ter Stegen to benefit a lot from their support during his early career days.

With their support for his decisions, their son continued to grow and succeed in his goalkeeping trade thus making him the person he’s known to be today.

Both brothers started playing football near their house between garages. Before ter Stegen became a goalkeeper, Juan Marcel assisted him in learning how to shoot with both legs.

Marc-Andre ter Stegen once made a move to distance himself from comparisons to Lionel Messi despite being handed the nickname ‘Messi with gloves’. This came when the German stopper was overpraised for his passing ability and smart distribution.

After being compared in technical ability to Ballon d’or winning Messi, ter Stegen moved to separate himself from the flattering moniker.

FACT CHECK: Thanks for reading our Marc-André ter Stegen Childhood Story plus untold biography facts. At LifeBogger, we strive for accuracy and fairness. If you see something that doesn’t look right in this article, please place your comment or contact us!.