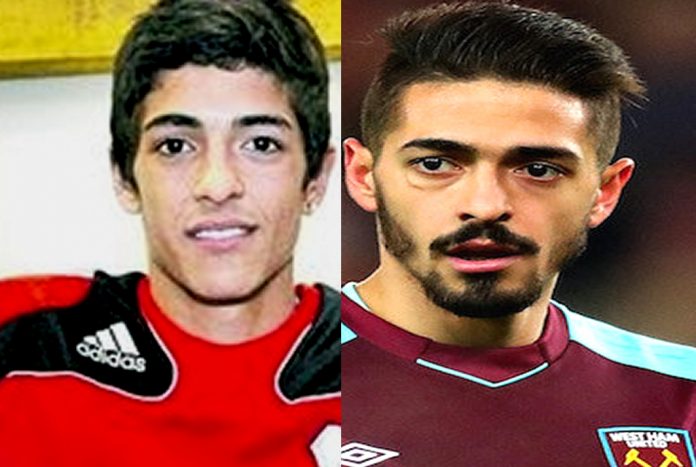 LifeBogger presents the Full Story of a Football Genius best known by the nickname “The Jewel“.

Our Manuel Lanzini Childhood Story plus Untold Biography Facts brings you a complete account of notable events from his childhood.

Yes, everyone knows of his dribbling skills, but only a few consider Manuel Lanzini’s Biography, which is quite interesting. Now without further ado, let’s Begin.

For Biography starters, Manuel Lanzini was born on the 15th day of February 1993 in Ituzaingo, Argentina. He was born to his Mother, Mariam Tajera (a housewife) and to his father, Hector Lanzini (a one-time professional footballer).

Growing up in the Argentine city of Ituzaingo, which is best known for its vibrant activities, young Lanzini was surrounded with love from his sport-loving and supportive family.

Lanzini’s parents were satisfied that he and his brother Tomaz (also a professional footballer and pictured below) have not only found a sport they would grow in but also showed prospects of becoming football maestros. 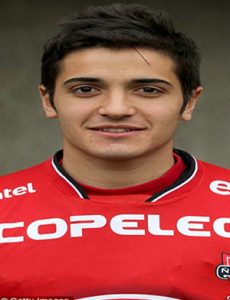 Their joy was more complete when Lanzini, despite playing street soccer, exhibited an early sense of purpose by buying tickets to watch River plate (his favourite club) in action.

It was only a matter of time before they got him enrolled in a neighbouring indoors club academy, Kaly de Ituzaingó where he first worked out his passion and set sails for professionalism.

While Lanzini was at Kaly de Ituzaingó, he put up an impressive display of skill and prospects that made many scouts sought to secure his services for different clubs.

Notable among the offers was one put forth by Ramon Maddoni, a renowned Argentine scout who wanted to take him to Boca Juniors for a test match.

Lanzini, however, turned down all offers as he was more concerned about playing for his childhood dream club River Plate. His dreams became a reality when he was invited to River plate in 2002.

He started off with the club’s junior team and exhibited top for performances despite his small stature.

On securing promotion to the club’s senior team in 2010, he made his debut for the club during River Plate’s 3-0 win over Central note when he was aged 17. 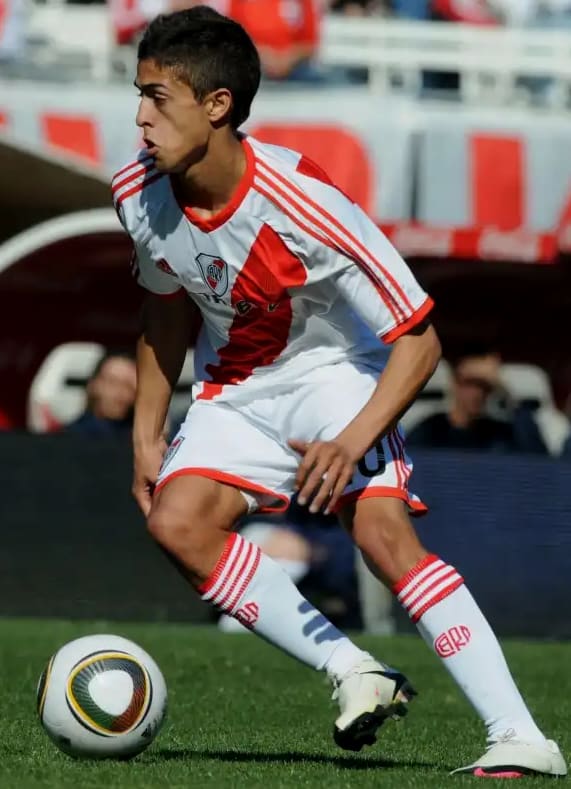 Lanzini never got the global attention he deserved while he was at River Plate until he was transferee to West Ham, where he got to play in the most-watched league in the world -the English premier league.

The season-long loan transfer saw Lanzini wear the Famous maroon and blue colours of West Ham in a contract that came with a clause of making his contract permanent. 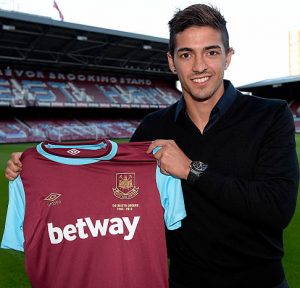 Lanzini was excellent in his first season with the hammers.

His impressive display caught the attention of Europe’s Elite teams but West Ham reacted swiftly by offering him a permanent contract, which he gladly accepted. 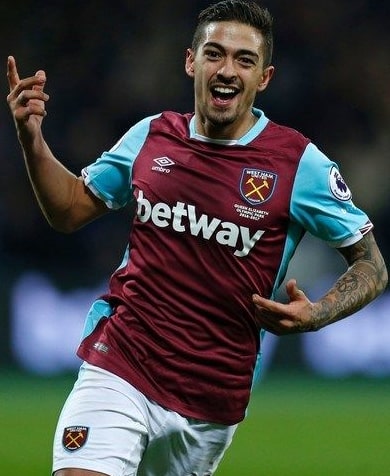 Behind every successful Argentine footballer, there is a glamorous wag or girlfriend, as seen in the person of Mer Lafuente.

Mer Lafuente is a fashion designer and a lawyer. A perfect example of beauty and brains who seems to be the perfect match for Lanzini. 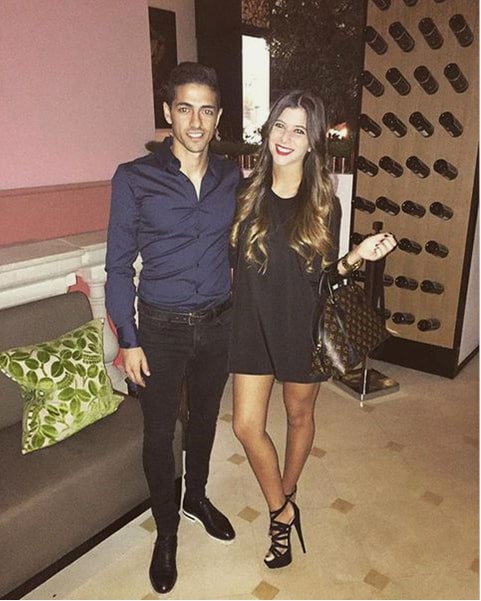 She is rarely active on social media. Although not yet married to Lanzini, they both have a child together named Benjamin. 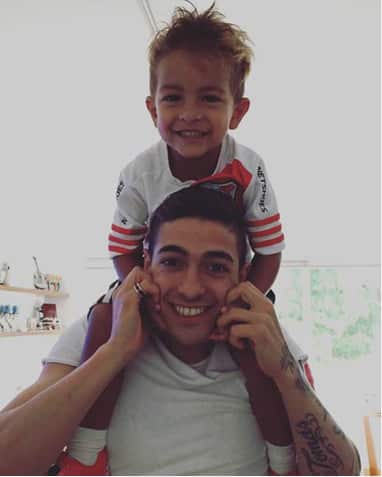 It is only a matter of time before wedding bells would start ringing for Manuel Lanzini and Mer Lafuente.

Most Football players are fond of wearing body arts that are quite incomprehensible, but Lanzini’s left arm tattoo is one that exhibits love and family unity.

He added the below photo of a tattoo on his left arm to his Instagram page with the caption”Never Let you walk alone”.

The tattoo shows Lanzini and his son wearing a River plate jerseys, strolling with an image of his face and that of his parents smiling from above. 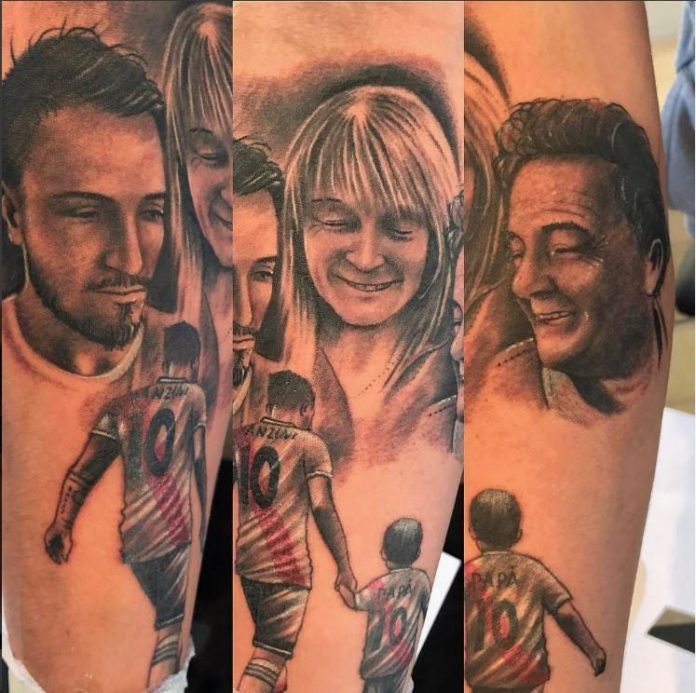 Most football greats have worn the number 10 jersey. Like Maradona, Zidane, Messi, Pele etc. The number carries a feeling of Prestige, Flair and respect.

As a kid, Lanzini (and other notable stars – like Alexis Mac Allister) crazily watched videos of Diego Maradona. But a certain Pablo Aimar is his role model.

And Lanzini gets the feeling of playing like the idols he looked up to as a kid whenever he wears the same number: 10 Jersey.

“Pablo Aimar is a legend, I idolize him. He controls the ball with ease, he’s very skilful and excellent passer of the ball. I want to play like him.”

Just as El classico (Barcelona vs Real Madrid) is to Spain. Manchester derby (Manchester United vs Manchester City) is to England. Old Firm derby (Celtic vs Rangers) is to Scotland. Argentina arguably holds one of the fiercest football rivalries in the world. Called the SuperClassico.

SuperClassico is a heated encounter between Boca Juniors and River Plate. 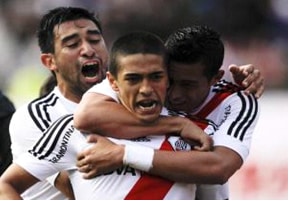 To date, Manuel Lanzini holds the fastest goal in the derby history, scoring just 43 seconds after kickoff. It is a record that could possibly take centuries to break.

Manuel Lanzini was nicknamed  “La Joya” which translates as “The Jewel” during his early days at West Ham in recognition of his immense contributions to the club, particularly his ability to dribble and get past defenders with incredible acceleration.

It is worthwhile to note that “The Jewel” represents Diamond, a precious stone that describes the way West Ham considered their resourceful acquisition

Lanzini is a determined player who would stop at nothing to prove himself as a valuable asset. This is evident in the manner in which he has been given nicknames that convey a sense of value. Above all, he loves being progressive and doesn’t believe in limitations. 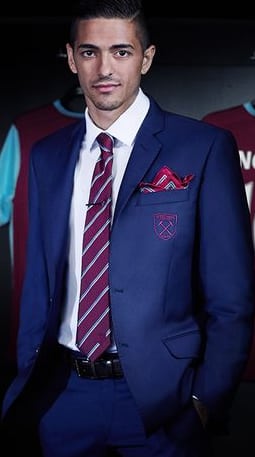 Thanks for reading our Manuel Lanzini Childhood Story, plus untold biography facts.

At LifeBogger, we strive for accuracy and fairness in our quest to deliver Argentine Football Stories. The Life History of Angel Correa and Gonzalo Montiel will excite you.