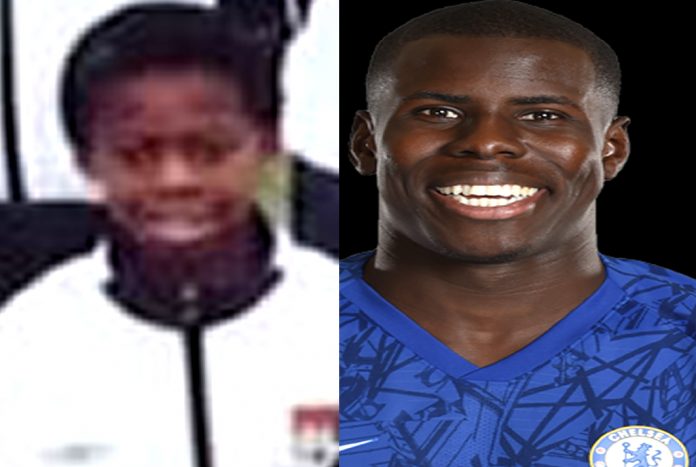 LB presents the Full Story of a French professional footballer with the nickname “LaZoumance“.

Our Kurt Zouma Childhood Story plus Untold Biography Facts bring to you a full account of notable events from his childhood time to date. The analysis involves his early life, family background, personal life, family facts, lifestyle and other little – known facts about him.

Yes, everyone knows of his strength, ability to read the game and aerial presence. However, only a few consider Kurt Zouma’s Biography which is quite interesting. Now without further ado, let’s begin.

Starting off, Kurt Happy Zouma was born on the 27th day of October 1994 at Lyon in France. He was one of 6 children born to a little known mother and to his father, Guy Zouma.

The French national of Black ethnicity with African roots was raised at his birthplace in Lyon, France where he grew up alongside an older brother identified as Lionel and 4 other siblings.

Growing up in Lyon, young Zouma was not initially interested in playing football. In fact, he preferred playing basketball. By the time Zouma was aged 9, he tried playing football at local Vaulx-en-Velin and realized that he was extremely good at it.

Not long after Zouma began playing for Vaulx-en-Velin, he made a promise to his parents that he would make it in the game. Thus, he worked hard to fare well in the sport considering the higher purpose of making his parents proud.

While at Vaulx-en-Velin, Zouma had a comprehensive education and career buildup in football that saw him try out several different positions before settling in as a defender. Upon six seasons of training, Zouma joined the Academy of Saint-Étienne as a 15-year-old in 2009.

It was at Vaulx-en-Velin that Zouma sharpened his defensive skills and recorded meteoric rise through the youth systems. His distinguished style of play soon caught the attention of club officials who sought to elevate him ahead of the 2011-12 season.

Zouma wishes to soar higher finally materialized in 2014 when he got signed to English side Chelsea FC on a five-and-a-half-year contract amounting to £12 million (€14.6 million).

However, the excited player’s move to the club and desire to make his debut for the blues was not as fast as he expected owing to the fact that Chelsea loaned him back to Saint-Étienne for the rest of the season.

The centre-back eventually got to make his euphoric debut for Chelsea in a pre-season friendly against Wycombe Wanderers. Clad with Jersey number 5, he pulled off impressive achievements in his first full campaign by helping Chelsea win the League cup and premier league in 2015.

Fast forward to date, Kurt Zouma is a distinguished first-team member of Chelsea FC and has been described as the “ultimate defender” for his speed, jump, passing, shooting and tackling skill. The rest, as they say, is history.

Kurt Zouma is married at the time of writing. We bring you facts about his dating history and marital life. To begin with, Zouma is not known to have had any girlfriend before he met his wife Sandra.

The better half is a French national and two years older than Zouma. Zouma was 19 years old when he got married to her in 2012. Their marriage is waxing stronger and blessed with two children  – a son and daughter – at the time of writing.

Kurt Zouma comes from a lower-class family background. We bring you facts about his family life.

Zouma’s father is identified by the name – Guy. He is a national of the Central African Republic who migrated to France in search of greener pastures many years before Zouma was born. While in France, Guy worked hard to provide for his family and often drove Zouma to training. Kurt credits the supportive dad for knowing when to be strict and lenient with his children.

Zouma has a little known mom who worked as a cleaner. She exercises great interests in Zouma’s games and was present when the centre-back signed his first professional contract with St. Etienne as a 16-year-old. Little wonder she couldn’t hold back tears of Joy when it was announced that Zouma had signed for Chelsea in 2014. The supportive mom always advises Zouma to be focused on his games and remains his biggest fan.

Kurt has 5 siblings that include a sister whom little is known about. Although Zouma shares a close bond with them, he is much closer to his elder brother Lionel who motivated him to play football. Lionel plays for Bourg-en-Bresse third tier at the time of writing. On his part, Zouma serves as a motivating influence to his younger brother Yoan who plays for Bolton Wanderers.

Away from Zouma’s immediate family, little is known about his paternal grandparents as well as maternal grandfather and grandmother. Similarly, not much is known about Zouma’s uncles, aunts, nephews and nieces while his cousins have not been identified in notable events of his early life to date.

What makes Kurt Zouma tick? Sit back as we bring you makings of his personality in order to help you get a complete picture of him. To start with, Zouma’s persona is a blend of Scorpio zodiac personality traits.

He is passionate, hardworking, intuitive and moderately reveals facts relating to his personal and private life. He has a few interests and hobbies that include playing video games,  watching animes, keeping up with basketball games, travelling and spending good time with friends and family.

Kurt Zouma has an estimated net worth of over $5 Million at the time of writing. The origin of his wealth stems from the salary he receives from his football endeavours as well as his endorsements deals.

As a result the centre back is given to spending big and has assets that speak well of such lifestyle like his mansion at Lyon in France as well as cruises in exotic cars that include a Porsche Panamera among other cars.

To round up our Kurt Zouma childhood story and biography, here are facts that are hardly included in his bio.

FACT CHECK: Thanks for reading our Kurt Zouma Childhood Story plus Untold Biography Facts. At LifeBogger, we strive for accuracy and fairness. If you find something that doesn’t look right, please share it with us by commenting below. We’ll always value and respect your ideas.