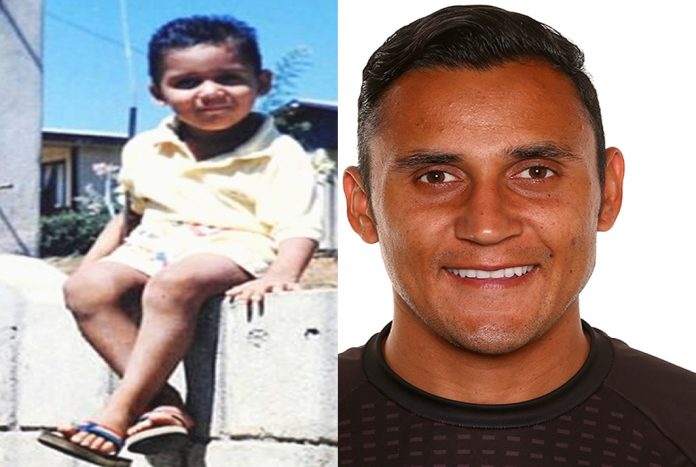 LifeBogger presents the Full Story of a Football Stopper who is best known by the nickname; “Mr Save“.

Our Keylor Navas Childhood Story plus Untold Biography Facts gives you a full account of notable events from his childhood.

Yes, everyone knows about his role with the Real Madrid team. However, only a few consider Keylor Navas’ Bio, which is quite interesting. Now without further ado, let’s Begin.

Keylor Navas was born into a poor family background stricken with poverty, which forced his parents to become migrants.

When Keylor was young, his parents, Sandra and Freddy, began a migrant journey to the American borders in other to cross into the country and seek opportunities in the land of dreams.

Because it was a dangerous journey filled with uncertainties, both Freddy and Sandra left behind poor Keylor (pictured below), who stayed alone with his grandmother and sister.

His parents once expressed their regret about the decision to leave their son and youngest child behind. In a later interview, Navas’ mother, Sandra, said the following;

It was a terrible decision to have to make to leave Navas and his sister, particularly as her son was just four years old.

The Big Decision: Before leaving for the borders of the United States, Kaylor Navas’ father made a decision that changed the destiny of his son and family.

Ideally, he took his time to instil the love of football in his son, advising him to get himself actively involved in soccer.

This saw little Keylor at the age of 5, playing soccer. His determination to become a professional goalkeeper wasn’t a passing fantasy.

Thanks to his father’s advice, Keylor Navas went to Pedregosso soccer school for seven years with monies saved by his parents before their departure.

Painfully, he could not get into the native town team because of some unfavourable characteristics.

Keylor Navas faced a series of rejections because he was seen as physically weak with an unsatisfactory height.

Luck finally came for Keylor in the year 1995 when he became accepted by his homeland club, Deportivo Saprissa. He played there for ten years, winning six league titles.

His form caught the eyes of scouts from the Spanish second division club, Albacete, who brought him to Europe.

Keylor after being loaned to Levante convinced the club who bought him for £100,000. This allowed him to play in La Liga in 2012.

It also marked the time Keylor was called upon to the Costa Rican national team as they prepared for the 2014 FIFA World Cup, which brought him to fame.

Keylor became one of the tournament’s best goalkeepers thanks to a string of stunning bird-style saves. 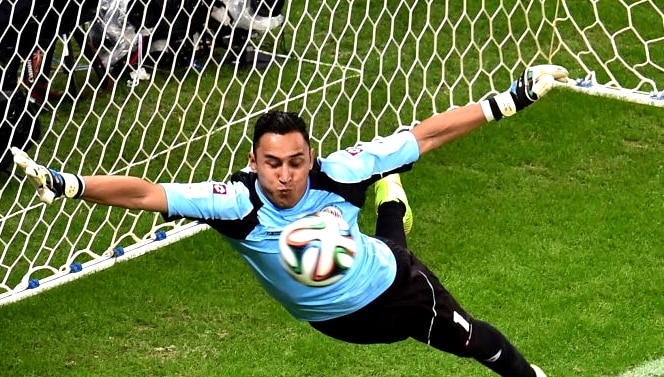 If you could remember, he was a vital part of the Costa Rica team that shocked Uruguay (Winning them 3 – 1) in their tournament’s opening group game.

Again, he made crucial saves in the penalty shootout against Greece, which saw Costa Rica reach their first-ever World Cup quarter-final.

Keylor’s world cup exploits led to Real Madrid calling for his services and triggering a €10 million buyout clause. As of 2022, the Costa Rican Goalkeeper, alongside the likes of Joel Campbell and Anthony Contreras hopes to make their country proud in the 2022 FIFA World Cup. The rest, as they say, is now history.

Navas met his future wife, Andrea Salas, thanks to his decision to attend church service two times a week. Both lovers were among mid-week worshippers at an evangelical church in Santa Ana in the year 2008.

Their eyes caught each other while in church service, prompting mutual feelings.

Both decided to take a photo shoot after church service, and this marked the beginning of their love story which has lasted to this date (as of the time of writing this Biography). 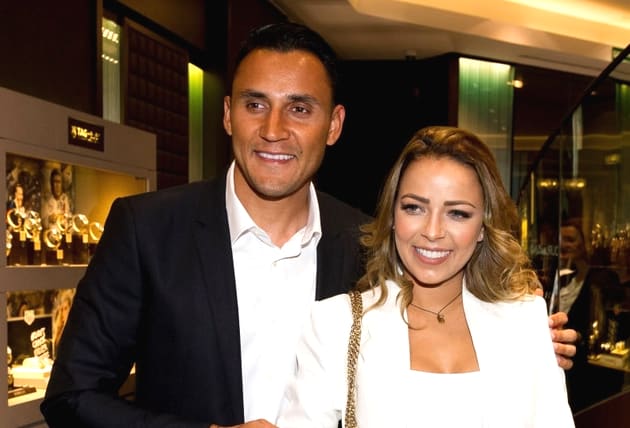 The couple got married a year after dating, precisely in December 2009. Navas and Salas now also have a son, Mateo. 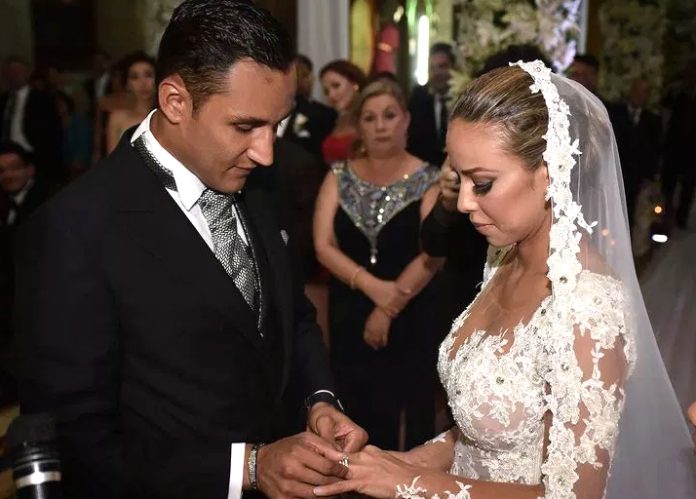 Andrea Salas is a beautiful former Costa Rica model. She decided to end her career when she married Navas.

It is important to note that Andrea was formerly married with kids before a divorce came which got the beauty single again. 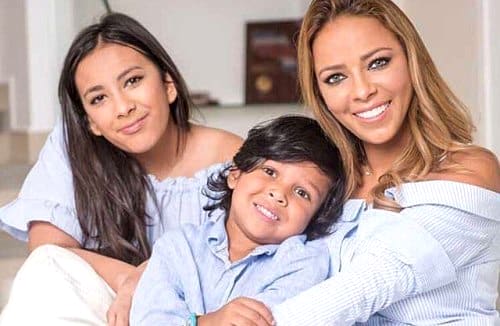 As seen in the photo below, her kids (Mateo Navas Salas and Daniela Navas Salas) from her former husband became a vital part of her wedding photo. 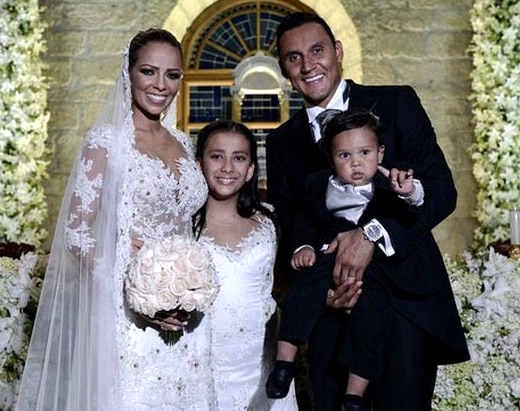 Andrea has never been a public person. She has no Instagram page, and there are only a few pictures of her on her husband’s page. Andrea has two younger brothers who go by their names, Walter and Bairon.

It was Football that changed Keylor Navas’ family background from poverty-stricken to riches. Keylor has two sisters, namely Keilyn and Kimberly.

Kimberly, pictured below, far right, is Kaylor’s younger sister, while Keilyn pictured far left is his elder sister who is a popular hairstylist in Costa Rica. 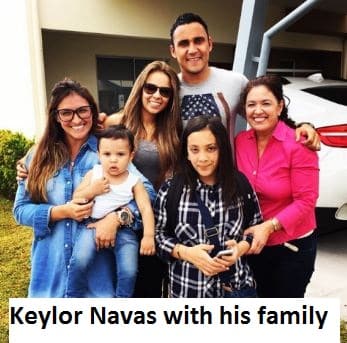 As of the time of writing, Keylor Navas’s grandparents are still alive.

Below is a photo of Elizabeth Guzmán, Keylor’s grandmother, Sandra Gamboa his mother and Juan Gamboa (his grandfather), talking about how difficult it was for Keylor at first. 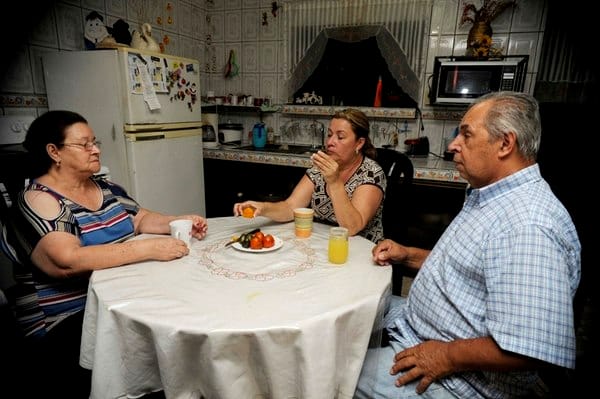 Navas’s mother, Sandra Gamboa have daughters who look very much like her as regards facial resemblance. Her grandchildren also have such looks as seen in the photo below.

Sandra spends a lot of time with her grandchildren Alonso and Bianka Rodriguez, in the San Andres neighbourhood, in Pérez Zeledón, Costa Rica.

The man himself, who made Keylor’s career possible is his dad, Freddy Navas. Pictured below is Freddy who is the major beneficiary of his son’s career. 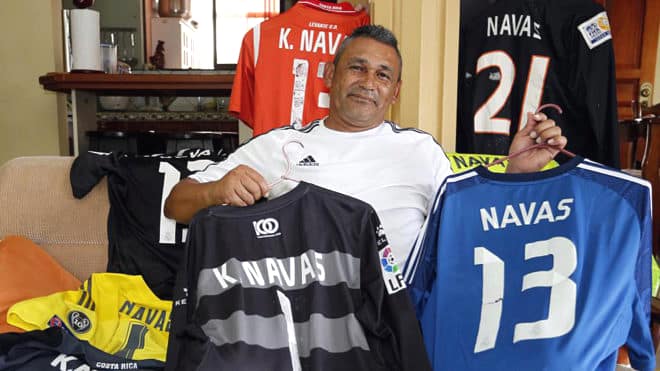 As seen in the photo above, Keylor Navas looks very much like his father, Freddy who manages his career. 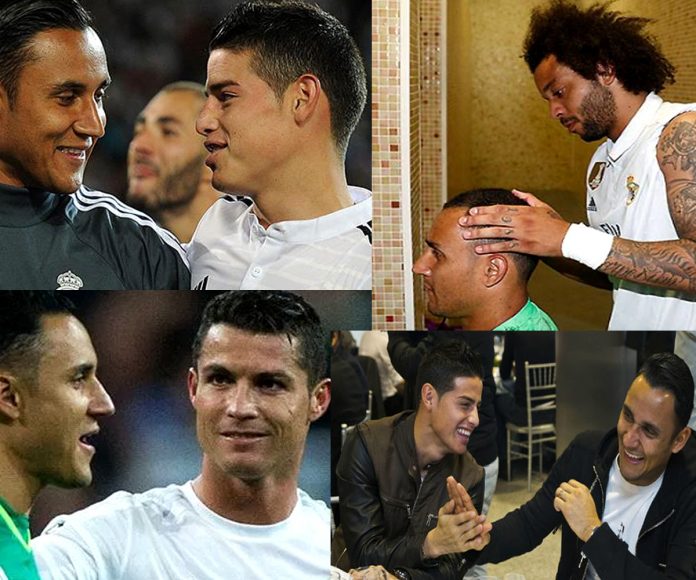 “I felt chills and tears in my eyes when I heard so many people sing my son’s name in Bernabéu. Keylor told me that all the players on the team love him very much. Marcelo, Cristiano, James and all the others, because he is very humble and calm.” 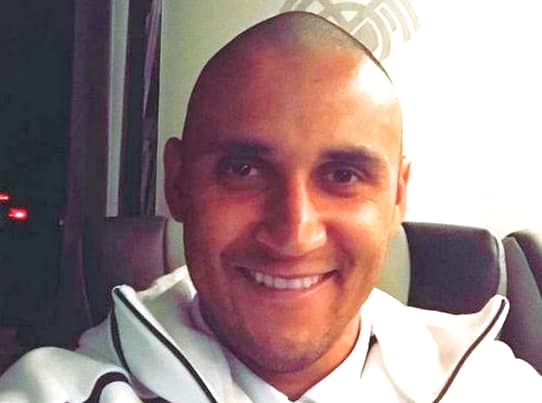 When Keylor Navas won La Liga in 2017, he celebrated by having his head shaved to support children all over the world with cancer. Marcelo was the one who shaved his hair.

Navas is a committed Christian. He spoke about his faith, saying, “God, for me, comes first. Before every game, I kneel, open my arms and pray … My favourite passage of the Bible is Galatians1:10 which says:

“If I were still trying to please man, I would not be a servant of Christ.”

FACT CHECK: Thanks for reading our Keylor Navas Childhood Story plus untold biography facts. At LifeBogger, we strive for accuracy and fairness.

I really Love this super star called keylor Navas. His life story is inspirational. He made me loved this page of the Bible too… Galatians 1:10 as a young upcoming footballer.