Our Robinho Childhood Story plus Untold Biography Facts brings to you a full account of notable events from his childhood time till date.

The analysis of the Ex-Man City and Brazilian Football Legend involves his life story before fame, family life and many little known facts about him.

Yes, everyone knows about his playmaking abilities but only a few fans consider Robinho biography story which is quite interesting. Now without further adieu, let us begin.

He started out playing football on the slum streets of Sao Vicente, a satellite town of Santos in the state of Sao Paulo, Brazil. He was the only kid in his neighbourhood that excelled much in the game. In one season, he scored an amazing 73 goals. He continued playing indoor samba football until he signed his first professional contract with Santos FC in 2002 at the age of 18.

Kaya sing kasebut sadurunge, Robinho teka saka latar kulawarga miskin. Gilvan de Souza pictured below is the father of Robinho. He was a former salesman who turned to an agent, all thanks to his son’s career.

He is someone who loves loyalty and often faults his son for not giving much loyalty to clubs he has played for.

His son, on the other hand, makes fun of everything he says about loyalty. According to Gulvan de Souza, “Ora ana sing pengin. Kontrak kudu dihormati. ”

MOTHER: Robinho’s mum, Marina da Silva Souza is a Caterer by profession. She is currently 56 years as at time of writing while her son, 33 (23 years gap). Both mother and son are very close. 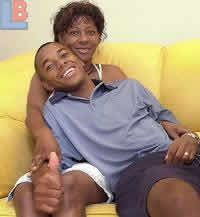 She was preparing a barbecue with friends in Praia Grande, a working-class area 45 miles from Sao Paulo when gunmen burst into the house and bundled her into the boot of her car.

Robinho upon hearing accepted the kidnapping threat as a hazard of his work. Friends said Robinho had been put on alert about the dangers of his high profile and had bodyguards. However, his mother had ignored advice about precautions.

At first, the kidnappers hesitated to contact. When they finally did, they demanded £86,000 pounds which was instantly paid.

Without a doubt, having a high profile and great wealth made Robinho’s family a target.

The Man City Legend has tasted love. In 2009, Robinho married Vivian Guglielminetti, his childhood sweetheart and Brazilian homemaker who he has dated since his childhood.

They saw each other for 12 years before eventually tying the knot.

Robinho Biography – Why he forced his wedding thru:

Robinho faced a difficult time with ladies in England which led him to force his wedding thru.

Before his wedding, he was once arrested after being accused of serious sexual assault over an alleged incident in a Leeds nightclub.

He also faced other notorious incident in Brazil when he, among other Brazil internationals, partied until five in the morning in Rio’s Catwalk Club, where he is said to have emerged to ask minders to pop to the chemists for a box of 40 contraceptives.

He forced himself to get married or risk losing his longtime girlfriend after observing he was risking his relationship.

Yes, for at least half of his life, it was actually a big deal for Neymar da Silva Santos Júnior to be in someone else’s photograph. In case if you are wondering, that is former Brazil star Robinho cheesing next to him. Oh, how times have changed.

Robinho Biography Facts – Once a Friend to Pele:

Pele was such a great friend and mentor to Robinho until the unfortunate happened between their friendship. (read below). The comments by Pele caused a sensation in Brazil. It left Robinho bemused and disappointed at someone he once referred to as a mentor.

Someone who seems to have forgotten the great idol he was. "Katon Pele must be reading sensationalist media, to come up with such wrongful statement,” Robinho ngandika.

Para penggemar bal-balan ndeleng reaksi Robinho marang Pele kang comments as gross disrespect. Robinho had made fame gotten over his head that he had forgotten the child he once was to Pele. Pengarepan Robinho kanggo pindhah menyang Chelsea was such that upon signing for Manchester City he accidentally stated,

“On the last day, Chelsea made a great proposal and I accepted.” To this comment, a reporter then replied, "Maksude Manchester, bener?" "Ya, Manchester, nuwun sewu!" wangsulane Robinho.

Ing Interview karo The Guardian, Robinho stated that Manchester City is a big club and the presence of Brazilian friends Jô and Elano were incentives for him to join the team.

Robinho Biography Facts – What he is remembered for:

Without a doubt, Robinho remains a football legend and a BONAFIDE MEMBER OF OUR LIST OF CLASSIC FOOTBALLERS.