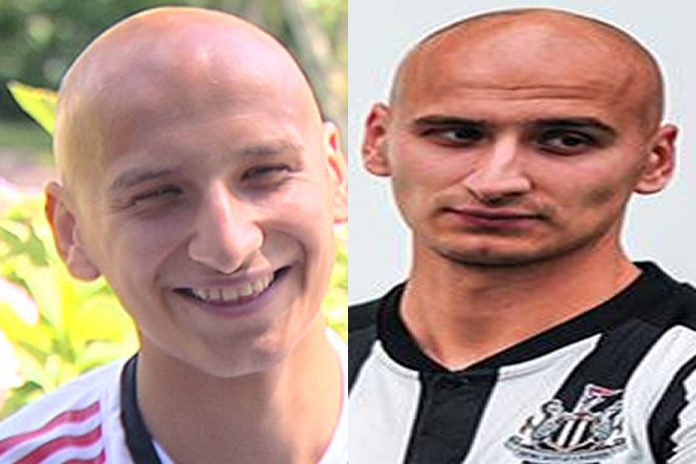 LB presents the Full Story of an Eagle-Eyed Footballer best known by the Nickname; ‘JJ’. Our Jonjo Shelvey Childhood Story plus Untold Biography Facts brings to you a full account of notable events from his childhood time till date. The analysis involves his life story before fame, family life and many OFF and ON-Pitch little-known facts about him.

Yes, everyone is aware of the fact that he has “Alopecia Totalis“ (a condition that leaves him completely bald) but few consider our Jonjo Shelvey’s Biography which is quite interesting. Now without further ado, let’s Begin.

Jonjo Shelvey was born on the 27th day of February 1992 in Romford, United Kingdom. He was born to his mother, Donna Shelvey and father, Ricky Shelvey. Jonjo has his part of his roots from Scotland.

He grew up in a council flat in Harold Hill which was rough and it still is now. Back then, his parents lived in a little council flat, next to the roadside shops, and there was always trouble, people getting stabbed. As Jonjo puts it,…“One Christmas I was in the pub with my dad and I looked across and there was a bullet hole in the television. I said: ‘Can we go, dad? Please I want to leave this neighbourhood’

Another point to note in Shelvey’s childhood life is the actual cause of his baldness and how it came about. The truth is, Shelvey’s baldness didn’t come naturally. It came as a result of an accident a few months after his birth. Shelvey was left unattended to as a kid which led him crawling towards the staircase and falling down. This resulted in a childhood trauma and skull fracture which caused the alopecia and hair loss. Upon treatment, Doctors prescribed a cream for his parents to apply on his head. His parents were also told to make him sleep in a woolly hat for a month in order to combat the baldness. Unfortunately, time passed and treatment wasn’t continued. His parents allow little Shelvey abandoned his treatment because of the discomfort it caused him. This by implication resulted in permanent baldness. 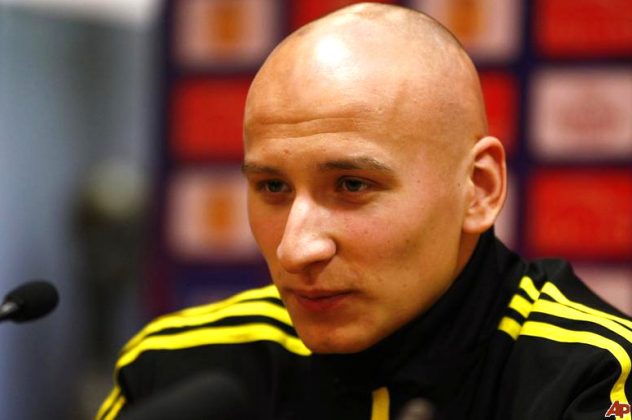 In Jonjo’s words…”I fell down the stairs when I was a baby and fractured my skull and I think that made it worse. I think I always stressed myself out as a kid, and alopecia cannot have it natural cure when there is stress. I tried things [to cure it] when I was younger but none worked for me. I tried this ointment that you used to rub into your head and I had to sleep in a woolly hat for three months. I got to about the fourth day and it was just roasting. I took the hat off and thought: ‘If you don’t like my Baldness, then don’t talk to me.’

FEAR: “When I was with Arsenal [as a nine-year-old] I used to go into training with a baseball cap on, because I was so scared of what people were thinking when I was growing up. I remember walking through Romford with my sister and I had my bald head and people would stare. My sister would get upset about it and ask people what they were looking at. Now, I’ve got to the stage that I don’t even bother shaving it some days. This is just the way I am, I suppose.”

Shelvey ever since he made it to top flight football has constantly supported youngsters who share his condition.

After seeing his elder brother fall in his career due to his rough life, Jonjo was motivated to start his youth career. He began in 2001/2002 with Arsenal. This was the same year Steven Gerrard busted into the scene. Young Jonjo was quick to make him his childhood idol and someone whose style of play he would look up to.

Shelvey was seen as a kid who had experience beyond his years. He burst onto the scene aged just 16 years and 59 days when he became the youngest ever player in Charlton Athletic’s history. 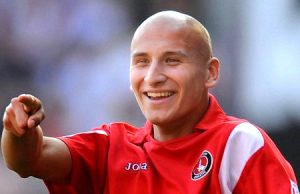 The Romford-born playmaker also became club’s youngest ever scorer, bagging his first goal 54 days before his 17th birthday. This led to Liverpool calling for his services. The rest, as they say, is now history.

Jonjo Shelvey’s eagle-eyed football is being complemented by a beautiful and wonderful lady. No other than British singer, Daisy Evans who is 3 years older than him (born on the 30th of November 1989). 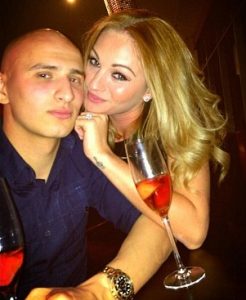 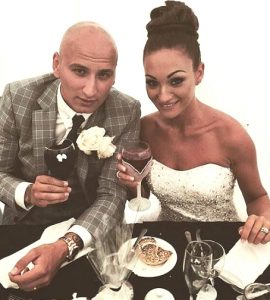 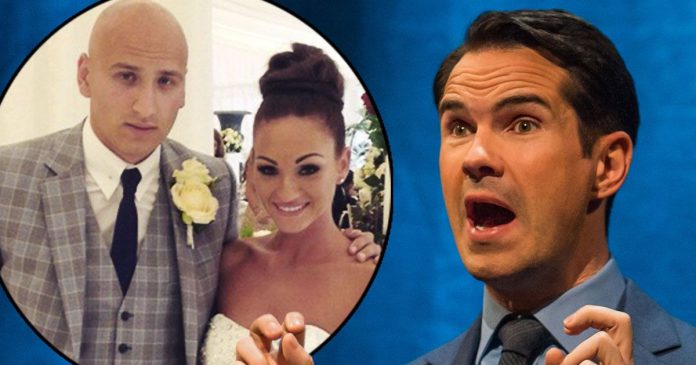 It is pertinent to note that the couple had a daughter (pictured below) who was born a year before their marriage. 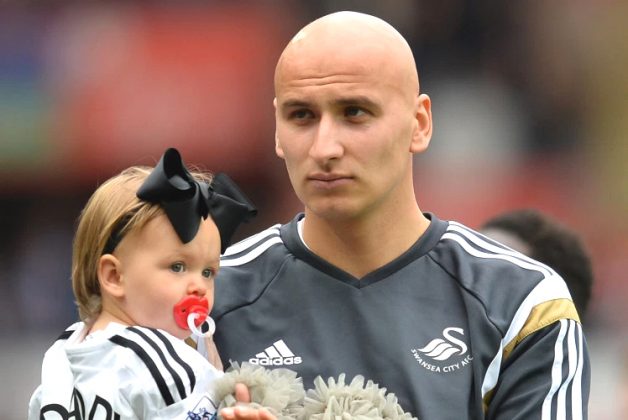 After his marriage, The midfield playmaker raised eyebrows when he posted an online advert looking for a personal chef to look after him, his wife and daughter offering a bumper £65,000 annual salary. Below is a photo of the advert. 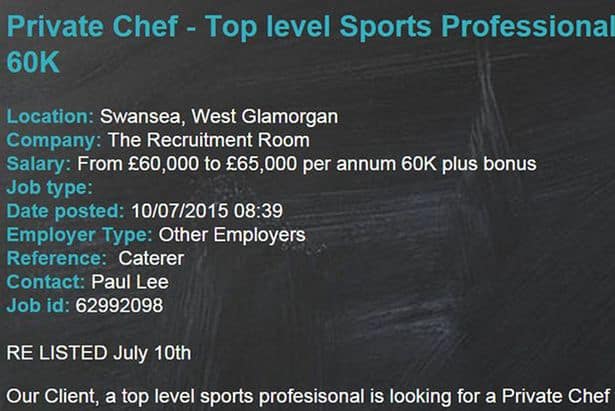 He stated that his family responsibilities and a new diet would improve his professional behaviour. However, the successful applicant will certainly have to earn their salary, cooking for Shelvey, his wife Daisy and young daughter Lola Fluer and being flexible around the Swans fixture schedule.

The advert reads: “Working on a rota basis over seven days, you must also have a large repertoire of different cuisines. As a private chef, you will also need experience and knowledge of sports nutrition, healthy, high-performance meals, sports nutrition and well-balanced meals to provide a varied diet. You must also have some previous private chef experience. The successful applicant will have had to work for their money though, with applicants expected to be on duty Monday to Sunday and be flexible with Jonjo’s fixture schedule with Swansea.” 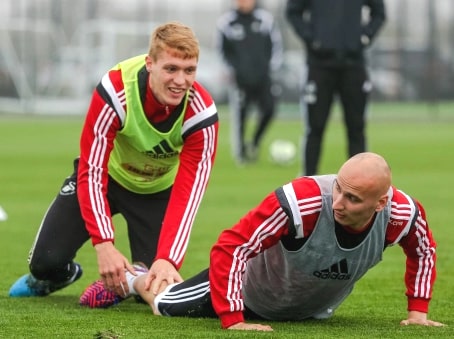 Shelvey justified the reasons for hiring a chef to assist the Premier League star and his family. In his words…‘I’ve been working with a personal trainer all summer in order to get myself fit for the season’, said the old Swansea midfielder. ‘I’ve always carried a bit of extra weight compared to other players but I’ve been working hard on that this summer. ‘I’ve also got a chef coming to stay with my family to cook for us, so I’ve looked at covering all bases.’

Jonjo once came from a middle-class family background operated by his dad, Ricky before football investment paid off. My dad, pictured below, still lives in the same troubled neighbourhood which he raised his two sons and daughter. 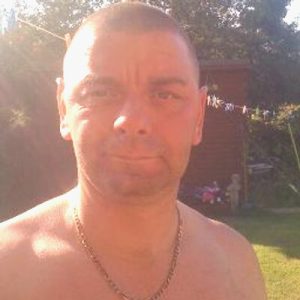 Mother and Sister: Jonjo’s mum and my sister live in Brentwood. Unlike her husband Ricky, and with the help of their footballing son (Jonjo), Donny took her daughter off Harold Hill after observing she had an unwanted pregnancy. As Jonjo Shelvey puts it; “My sister was pregnant and I didn’t want her baby growing up in the same area I grew up, so I bought her and my mum a house elsewhere.” Below is a photo of Donna Shelvey with her grandchild. 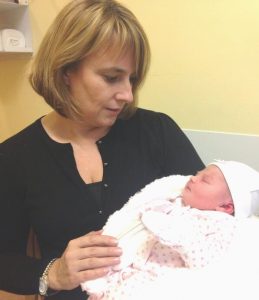 It is pertinent to note that Jonjo Shelvey has a Scottish grandmother.

Brother: Jonjo has an older brother named George Shelvey whose football career was ruined by drinking and partying. 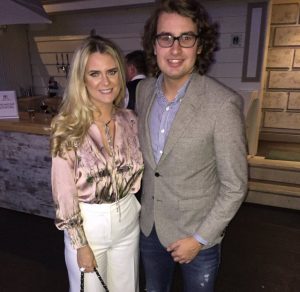 Jonjo Shelvey learned from the mistakes of his big brother George who was a one-time talented older brother. He and made sacrifices to help his football career. “George used to be better than me but he went down the path of girls, nightclubs and drink,” Shelvey says. “It would have been easy for me to take that route but I always had the desire to be dedicated. My mates would be out and I was sitting indoors watching DVDs of Steven Gerrard. I knew if I kept my head down that I had the ability to make something of my life which eventually came to pass”.

Shelvey famously mouthed off at former Manchester United boss Sir Alex Ferguson after being given his marching orders in a game between Liverpool and the Red Devils. 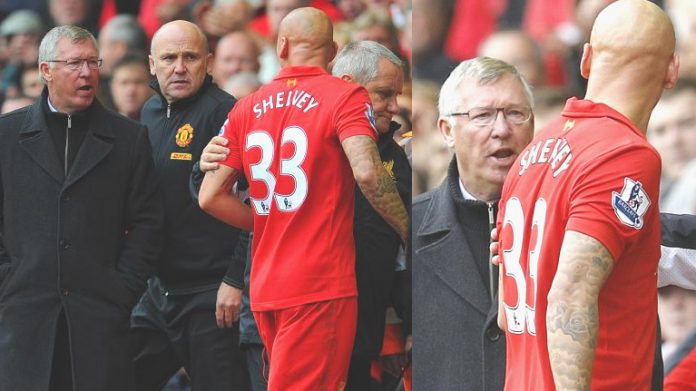 At the time, he accused the retired United boss of ‘grassing’ him up. Rejecting Shelvey’s apology, the most successful British manager of all time said: “No I like it. It shows you’ve got a bit of balls about you.” 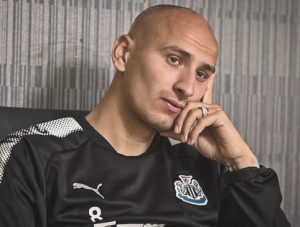 Jonjo’s Weaknesses: He could be fearful, overly trusting, sad and has the desire to escape reality.

What Jonjo dislikes: Know-it-all, being criticized, the past coming back to haunt him and cruelty of any kind.

FACT CHECK: Thanks for reading our Jonjo Shelvey Childhood Story plus Untold Biography facts. At LifeBogger, we strive for accuracy and fairness. If you see something that doesn’t look right in this article, please place your comment or contact us!.