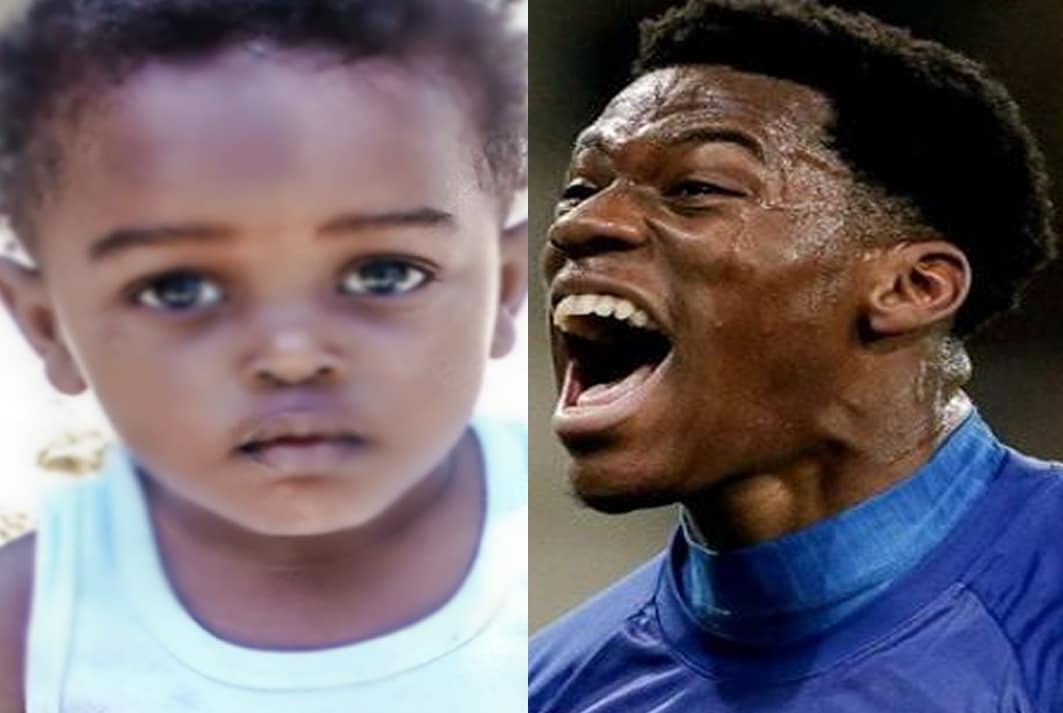 Yes, everyone knows the footballer is considered as “Europe’s Next Big-thing” as far as football (soccer) is concerned. More so, the fact that he is towing towards the lane of entering the list of becoming the Best Canadian Footballers of All Time.

However, very few football fans have considered reading Jonathan David’s Bio which we have prepared, and it’s quite interesting. Now without further ado, let’s begin.

First and foremost, his full names are Jonathan Christian David, and he is nicknamed “The Canadian Pearl.” Jonathan David was born on the first month of the new Millennium, 14th day of January 2000, in the Brooklyn borough of New York City, United States. The soccer payer was born as the first son out of two children to his parents.

As far as his date of birth is concerned, young David was one of those few babies born at a time of considerable uncertainty on planet earth. Truth is, the Canadian soccer player was a lucky child. The beginning of the new Millennium never witnessed any tech disruption or that Y2K, (the infamous millennium bug). Missiles never fire by accident and aeroplanes as predicted never fell of the sky.

According to Sports-Magazine Knack, Jonathan David’s parents were visiting family in New York just before his birth. His mum and dad agreed to have their son in the United States so the family would acquire citizenship through him.

Three months after David was born, both his parents felt they no longer have to need to stay in the States. The family left for Port-au-Prince, Haiti.

Being born in New York and playing for the Canadian national team does not imply he has a North American family origin. Jonathan David’s family have their roots from Haiti, the Caribbean country.

If you’re sharp in history, you’ll probably remember the Caribbean country for a sad reason. It’s no other than the country’s disastrous earthquake of January 12th 2010 that claimed the lives of around 316,000 persons.

Thankfully, while little David age of 6 (just 3 years before the earthquake), his parents decided to emigrate to Canada. Having family roots from a poor country, giving birth to their son in New York, then knowing what’s best for him at the right time meant two things.

First, Jonathan David is likely to have come from a wealthy family background. Secondly, they were lucky to have left Haiti 3 years before the disastrous 2010 earthquake.

Jonathan David’s family settled in Ottawa (Canada’s capital city) upon emigrating from Haiti. Growing up in Silicon Valley North was a bit boring for the young kid. Lively moments only came when he was with family and/or school.

As regards his education, Jonathan David’s parents had him enrolled at a Francophone public school named Louis Riel, where he developed his love for football (soccer).

According to ICI-Radio Canada, the footballer cited this school as the reason for his early football success. He became addicted to playing football at Louis Riel.

Jonathan David early childhood life was very football-centric. Even in his middle ages, the footballer never saw his professional football dreams as a passing fantasy. At school, the earnest student began an informal career with its soccer team.

Back then, David had a strong determination to play professionally in Europe. Right from the onset, he had no desire to play in North America neither was he interested in watching Canadian football or the US Major League soccer. For a patient lad, it didn’t matter how locally he started as long as he never stopped dreaming.

When the time was right, the young footballer began a humble career locally with Gloucester Dragons. He then proceeded to Ottawa Gloucester Hornets and then, Ottawa Internationals between the years 2011 to 2018.

After so many failed trial attempts, joy came at last for the David’s household. The joy of his parents and family members knew no bounds at a time their son got invited for trials by a host of some Europe teams.

For every aspiring footballer, it is extremely difficult to leave both parents and family members behind to pursue football dream in another continent.

Did you know? The Canadian soccer player first tasted disappointment in Europe. David failed his earlier trials for both Red Bull Salzburg and Stuttgart before passing that for K.A.A. Gent (a Belgian football club).

Starting life with De Buffalo (K.A.A. Gent’s nickname) wasn’t easy as well. During the first training, David (age 16) was told to train with Gent’s U21. Speaking about the tough experience, he once said:

“I felt I had done so badly that Ghent could not help but release me. One afternoon, there was a second training and luckily I was able to recover.

My confidence got a boost when the coach came to tell me that I had something special.”

Comparing Gent to be in the ranks of the biggest club in Europe doesn’t make sense. In order to get noticed, young David (age 19) decided a strategy of scoring lots of goals for both club and his national side.

The gods of football blessed the Canadian soccer star with a debut scoring streak (scoring 5 in his first 5 matches), a feat that led Gent to extend his contract to 2022.

Asides scoring 30 goals in the Belgian League (within a short period), the rising star fulfilled his dreams by raining goals while on national duty.

Did you know?… David grabbed three individual honours in the year 2019 (at the age of 19) all thanks to his goal-scoring prowess that knew no bounds. These accolades include: 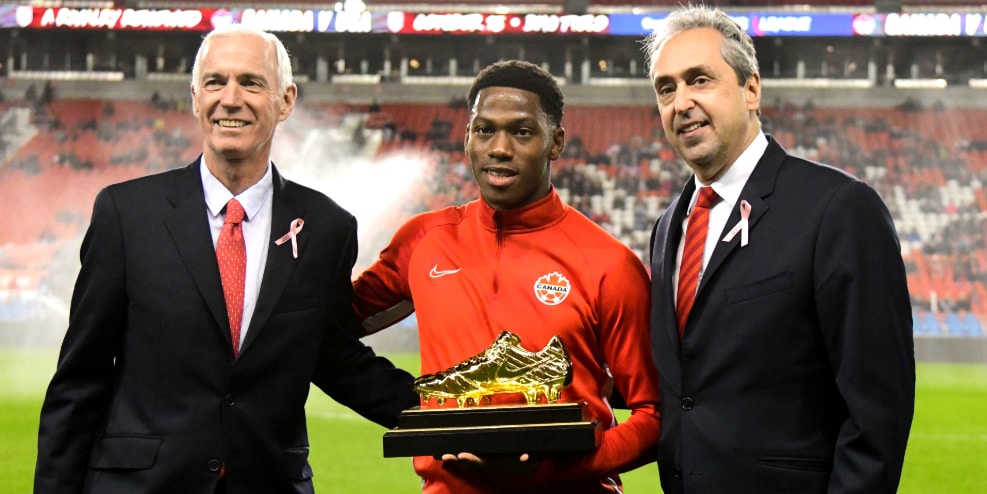 The Transfer Speculation that marked his Rise

Gent’s chairman Ivan de Witte decided to extend his contract again (to 2023) as soon as they noticed big clubs circling around him like sharks.

Even the COVID-19 pandemic wasn’t enough to stop scouts from chasing his signature. Until the Coronavirus stopped the Belgian league, a blazing David had accumulated 18 goals and 8 assists for the 2019/2020 season.

In Belgium, there is currently no teenager who has had such an impact on his team as Jonathan David. Since after the discovery of Alphonso Davies, the Canadian footballer has proven to be the next beautiful promise of the country’s soccer generation. The rest, as we say, is history.

Sadly, the Canadian football forward only makes news for his impressive goal-scoring abilities. Recently, there’s been an earnest desire to know if Jonathan David has a girlfriend or ascertaining if he is married- with a secret wife and kids.

After much digging around the web, we’ve come to the conclusion that Jonathan David (at the time of writing) has made a conscious effort on not revealing details of his relationship life. Perhaps his parents and advisers might deem it as too early for his career.

Who is Jonathan David?, the Canadian Soccer Player

Getting to know Jonathan David’s personal life off the pitch would help you understand him better. First, the footballer believes it’s not just about scoring goals but having soft feelings on matters that affect his heart.

Truth is, the Canadian is deeply connected to Haiti family traditions. More so, Jonathan David is capable of remembering every single event (good or bad) from his childhood.

Since his youth, the Canadian footballer has carried Haiti in his heart ever since the country suffered the disastrous earthquake of 2010. David Jonathan has vowed to use his football monies to help needy families in the Pearl of the Antilles.

More on his Personal Life:

The Canadian footballer possesses an inner state of independence, one that enables significant progress in his personal and career life. The youngster has the ability to lead the way, making realistic plans for his life.

Finally, David is someone who does not feel the need to represent his dad, mum or sister with body arts (tattoos). From a religious point of view, he is a devoted Christian who doesn’t hesitate to praise God when he scores.

For the young footballer, his family has been the support he never had to pay for. Come rain or shine, they have been there to support him in every step of his way up.

In this section, we’ll bring you more facts about Jonathan David’s parents and family members.

Sadly, the mother of the football flavour passed away in the early days of December 2019. David travelled to Canada at the time he received the sad news that his mother’s health was rapidly deteriorating.

Just as he approached a break in a journey (the London stopover), he was told his mum had tragically died. Jonathan David’s mum’s funeral was made on December 14, 2019, with his uncles, aunties, sister, dad and other relatives in attendance.

The footballer’s dad presently lives a lonely life after losing his beloved wife around December 2019. David’s road to stardom wouldn’t have been as palatable as it is without the help of dad who he sees as his first point of contact whenever things go wrong.

The Canadian footballer has a sister who happens to be his one and only sibling. It appears Jonathan David’s parents must have had his sister in Haiti or Canada owing to the fact he spent most of his childhood years in these countries.

The Canadian Pearl lives an organized life in the city of Ghent, East Flanders (Belgium). Jonathan David lives a humble lifestyle, one that is devoid of irrational spending.

Just like other young footballers, namely; Ibrahima Konate, Eberechi Eze, etc., the footballer holds on to practical needs that don’t cost much.

Net Worth and Salary

Considering he is a young footballer with a decent wage of €13K per week, it is fair to say David Jonathan’s net worth could be around $1 Million. According to SoFIFA stats, the Canadian footballer receives an annual salary of €676,000.

In this section, we’ll tell you some things we bet you never knew about the Canadian goal-scoring machine.

Fact #1: What SOFIFA says about him

At the age of 20, Jonathan David is already blazing on FIFA. With his potential rating, there is a possibility of him being ranked among the 10 best strikers in the world.

During his teenage childhood years, David witnessed a period when addiction to PlayStation nearly ruined him. This came at a time he needed to concentrate on meeting his goals- playing European football.

It took the efforts of a godsent trainer to bring him to order. Thanks to his self-control infused him, David shunned his addiction habits.

Fact #3: Whom he worships as his Football Idol

All over the world, many young football players look up to the very best as their idols- this includes the likes of Christiano Ronaldo, Lionel Messi etc. As a growing footballer, it wasn’t it difficult for David to find a role model or soccer idol.

As regards his football idol, you might think of the likes of the superstars mentioned earlier. However, it will surprise you that the only name that comes Jonathan David’s ming is Dwayne De Rosario, Canada’s top goal scorer.

Did you know? The Canadian (at the young age of 20) has a speed that reaches 33 kilometres per hour. Judging, by the way, he is taking up his speed trade, we’re sure Jonathan David would in no time be ranked among the top 5 fastest players in the world.

The video below would provide you reasons why many top European clubs have begged for his signature.

Thanks for reading this article on Jonathan David. LifeBogger strives for accuracy and fairness in our daily routine- writing childhood stories and biography facts. See something that doesn’t look right in this article, please place your comment or contact us.