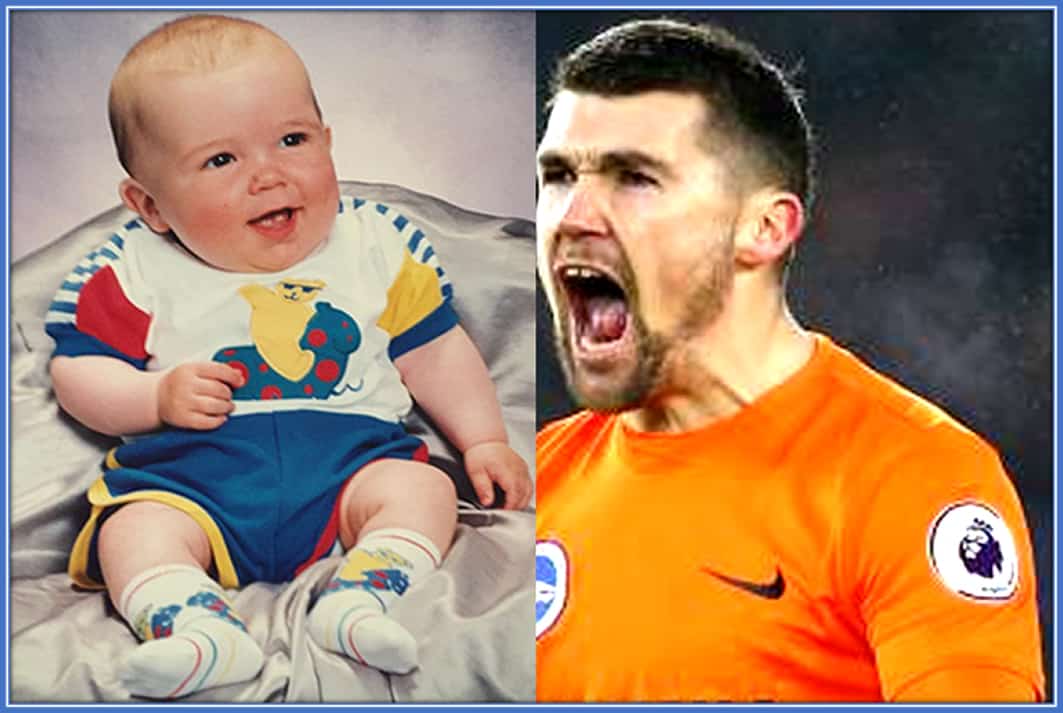 The Australian goalkeeper came to the world as the first child and son out of two children – Mathew (himself) and Megan, born of the union between his parents.

We have here, a good old pic of the Premier League Goalie and his Mum (Carol Ryan) who could be in her late 50s – at the time they took the photo.

The former Brighton Goalkeeper once told his Instagram fans – that he spent his earliest days as a super joyous kid. We found out it is true.

As a little baby, Maty had no single worry about his world. He misses those good old days, which he cannot revert.

Spending childhood in a happy middle-class household is like experiencing an earlier version of heaven. This is typical of Mathew Ryan. The Ex-Brighton goalkeeper comes from a humble family background.

Research has it that every member of his household – Mum, Grandparents, sister – is humble, well behaved, respectful, and very educated.

Interestingly, where he comes from – Plumpton – is located so far away from Europe and the UK. Plumpton is 46 kilometers west of Australia’s Sydney central business district.

According to Wikipedia, Mat holds the honor as the most successful footballer from this small town.

The quest to become a Shot-Stopper started as early as the age of four. During that time, Ryan featured for many amateur teams.

At age of ten, he began applying for trials at nearby academies. Marconi Stallions, a small academy –  40 minutes’ drive from his family home first accepted him after a successful trial.

Approaching the age of sixteen, Mat felt the desire to move to a bigger academy. His number one mission was to secure smooth academy graduation and get European football opportunities.

In the year 2008, Maty left his childhood club Marconi Stallions for another – Blacktown City – where he stayed for a year.

Facing a lack of the first-team opportunity, he moved back to his old club – Blacktown City where he became their first-team goalkeeper. With the club, Mat had the best start to his professional life.

During the 2010–11 Australian A-League season, Mathew Ryan got his long-awaited opportunity to make his name on the team’s first sheet.

Following the injury, Ryan got the call to prove himself as the Number 1 goalkeeper. He did that, with lots of confidence in his gameplay.

After a series of impressive performances, our boy became more important than the club’s first-choice Goalkeeper, Jess Vanstrattan. That elevated Ryan into the team’s starting eleven.

Ryan continued his impressive performance, even beating the competition posed by newly signed goalkeepers who tried to displace him.

Keeping his spot in the starting lineup, he helped his team win the A-League Premiership (Australia’s highest football league trophy).

During his winning celebration, Mat could not escape the huge charge of love from his fans.

As a rising star, he earned many awards including two-time player of the year honors. His records with Australia’s Mariners led to national recognition.

To the joy of his family, he also got a national team call-up.

After becoming central to the club’s second A-League trophy, the rising Goalkeeper finally got Europe’s attention.

Club Brugge (a Belgian professional football club based in Bruges in Belgium) signed Ryan on the 30th of May 2013. For the first time, he left home, his parents and sibling to another continent.

Luck followed him at Belgium as he became a crowd favorite thanks to series of clean sheets and wonderful displays.

He won the Belgium Pro League Goalkeeper of the Year – two seasons in a row. Behold one of his best memories at the Jupiler pro-league, during the 2014/2015 Belgian Cup celebrations. 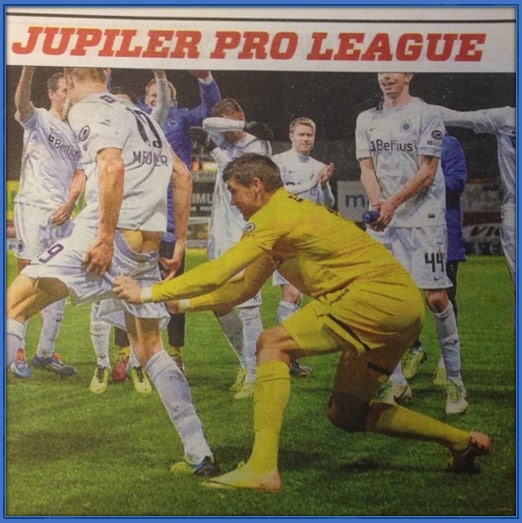 A hụrụ Maty n'anya nke ukwuu, dị ka ndị ama ama ama ama Australia Mile Jedinak. Whatever the future turns out to be for him, Lifebogger surely wishes him the best. The rest, as we say of his Biography, is now history.

Many of us love household pets, and Mathew Ryan isn’t an exception. The Goalie has a Dog who is so playful and fun to watch.

The video below explains the relationship Ryan has with his best friend and fellow family member. His Dog is a female, and she goes by the name Millie.

During off-football seasons, he prefers going to fishing holiday destinations. From what it seems, catching big fish is also a trademark moment. Here is Mathew Ryan with an 88kg monster bluefin tuna – probably the biggest he has caught.

Apparently, he considers the deep love for his household as life’s greatest blessing. No amount of football monies can take the place of time he has with his adorable nuclear family.

Here, Lifebogger goes deeper into facts about his parents, sister, and grandparents.

Carol, his mum, brought so much happiness to his childhood. For this reason, the Goalie never stops celebrating her.

Mathew Ryan is the type who loves having adventures and spending time together with his Mum. We have a video where he showed fans his own way of celebrating Mother’s Day.

His name is David Ryan and unfortunately, he appears not to exist in his son’s life. There is a lack of documentation about Mathew Ryan’s Dad.

His Father’s pic doesn’t exist on his social media account, which has many family members represented. It leaves us to the fact that he could be late or no longer married to Carol Ryan.

Megan, Maty, and Carol both have one thing in common. It is their love for watching LIVE tennis matches. They enjoy watching the game together at the Wimbledon center court. We see the Trio here enjoying a Federer and Djokovic match.

They remain his career’s biggest supports, one whom the Goalkeeper can’t thank enough. His Grannies have done a lot for him and his immediate family.

Despite the huge time difference between Australia and the UK, both stay awake to watch most of their grandson’s matches. Here, Grandmum and Pa joyfully see him off the airport. 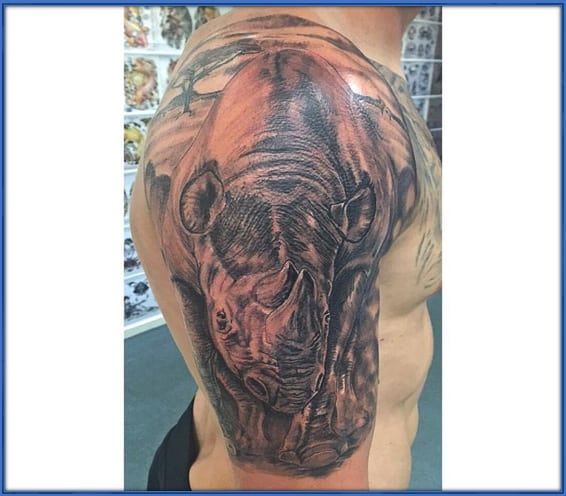 Regarding his hobbies, Ryan loves to practice water aerobics. The act of goalkeeping on the water is one of his best cardio routines. It is his own way of losing weight and creating resistance to his body. Here is a video. 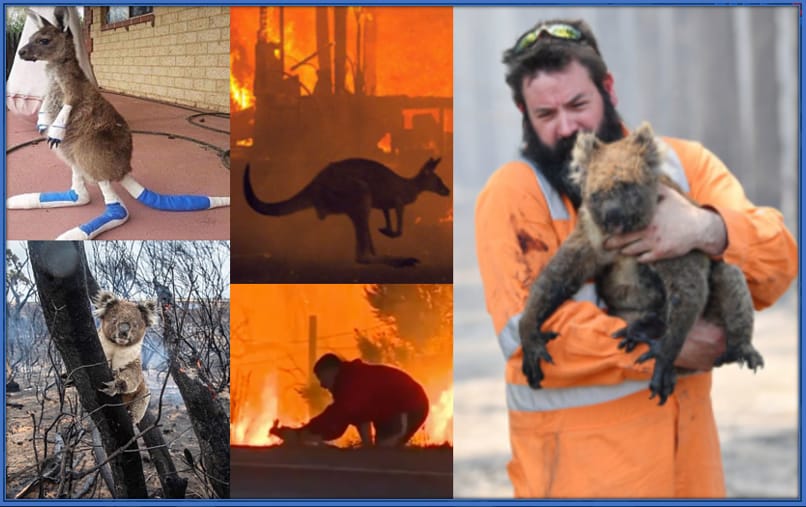 The Australian goalkeeper has got over 10 years of working experience spanning from 2009 to 2021. Mathew Ryan’s agent is Beckster SPRL – a company that has Lucas Digne as their biggest client.

With them, the Goalie has pocketed millions of salaries and sponsorship deals over this time. Lifebogger estimate Mathew Ryan’s net worth (2021) to be around 6 million pounds.

Mat Ryan Goalkeeper’s attributes on the EA video game series are shockingly bad. A score of 78 and 80 potential seems unfair for a man labeled as one of the best Goalkeepers in the premier league. 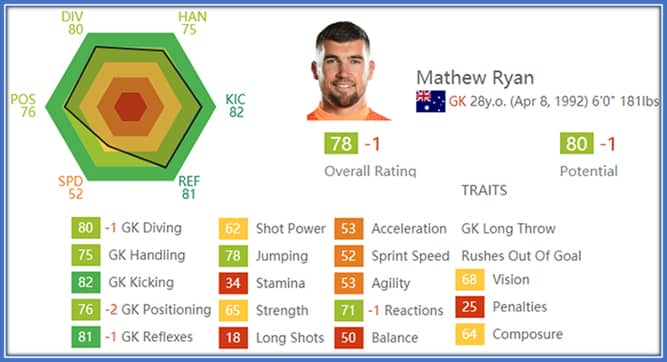 The Goalkeeper is among the 52% of Australians who practice Christianity. Also, judging from the fact that his first and middle names are Mathew and David, there is high certainty that Mathew Ryan’s parents raised him a Christian.

Mathew Ryan’s story began in Plumpton, a little suburb in the heart of western Sydney. This was where he decided, that sport would be a major part of his future.

With the support of his family (mother -Carol, sister – Megan, and grandparents), he achieved his Life Goals.

The Biography of Mathew Ryan makes us understand the true essence of having healthy competition in sports. By competing against his fellow goalkeepers, Mathew became a better version of himself. Australians hold him in high regards like Tim Cahil, Mark Viduka, na Harry Kewell.