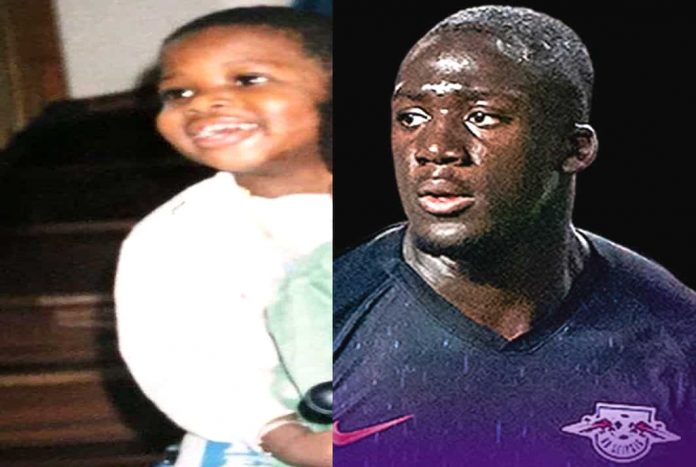 More so, Konate’s Lifestyle and other notable events right from when he was a child to when he became popular.

To whet your autobiography appetite on how engaging Ibrahima Konate’s biography would be, we’ve gone ahead to prepare you his Early Life and Rise Gallery. Behold, a perfect introduction to Ibrahima’s Story.

Yes, everyone knows the defender is easily recognizable with his amazing (6 feet and 4 inches) height. More so, the fact that he is one of the most underrated centre-back in the world.

However, only a hand few of football lovers have read Ibrahima Konate’s Biography, which we’ve prepared and is quite interesting. Now, without further ado, let’s begin.

For Biography starters, Ibrahima Konaté was born on the 25th day of May 1999 in the city of Paris, France. The 6 foot 4 defender was born into a large family, more so, he is one of the youngest sons born to his parents.

Although not being the last child, little Ibrahima enjoyed a near-perfect world with his cute little brother who goes by the name Moriba Konate.

For Ibrahima, the greatest childhood memory was that spent with his little brother Moriba.

The two brothers have developed so much love for each other since childhood, a feat that has made both friendships inseparable to date.

Judging from his dark looks, you can probably guess that the defender’s parents possibly have African ancestry. Well, you’re right. Truth is, Ibrahima Konate’s family have their origin from Mali.

In case you didn’t know, Mali is a landlocked country, the biggest country (by size) in West Africa. The West African country is roughly twice the size of Texas, the second-largest American state.

Did you know?… Ibrahima Konate has a similar Malian family origin with fellow notable French footballers. These footballers include the likes of Moussa Sissoko, Moussa Dembele, N’Golo Kanté and Djibril Sidibé.

Every dad and mum wants to raise a calm child and luckily, Ibrahima Konate’s parents got that quality in their son.

Truth is, the 6′ 4″ defender has always been calm since his childhood days. As a little boy, Konate had this vision of knowing what he wanted in life.

With the help of family members, he could envisage his future. In addition, set his path in the right direction of becoming one thing- a footballer. While some children grew into crime, Konate lived a peaceful and foresighted childhood life.

The young lad played lots of football during his childhood days. Strengthening his football skills on a daily basis was Konate’s own way of educating himself.

Of course, playing football went through his parents’ approval. Both his mum and dad saw football as a means for social good in order to minimize risk factors related to crime, violence and drug use.

Understanding their boy’s desire to play football for a living, Konate’s parents did all they could to support his aspirations.

At the age of 10, the young lad enrolled into the academy roaster of Paris FC after a successful trial.

Paris FC is a French professional football club based in Paris. It was the most preferred academy because of its proximity to Konate’s family home.

At the age of 14, Ibrahima Konate’s parents felt the need for their son to play his football elsewhere.

Thanks to his qualities, the youngster saw himself in great demand by several academies who begged for his signature.

While being a little hesitant to Rennais and Caen, young Ibrahima decided to sign for Sochaux because they were the first to come forward. More so, the club, unlike others, showed the most desire to recruit him.

Despite the agreement, Konate’s parents (notably his mum) were still hesitant. She made the decision to visit the club in order to see its facilities for themselves. Speaking about the experience, Konate once said.

“I went to visit the academy’s facilities with my mother. she saw that at the school level, they were SERIOUS. so I joined them.”

Coping with moving away from parents and family members for the first time, is one of the hardest things in the life of any young footballer.

At Sochaux, Ibrahima knew in order to make it, he had to make his new place feel Like home. After some time, he began to integrate with his teammates- especially his best friend, Bryan Lasme (fellow French footballer).

Konate’s footballing maturation at Sochaux was more of an adventure. Each year, he progressed, taking diligently his footballing responsibilities.

However, not everything was served on a platter. Now let bring you a piece of Konate’s biography you probably never knew about.

Did you know?… Poor health was the only thing that limited his progress at academy level. Truth is, his health failed him just at the time he needed it to scale through academy graduation.

Thankfully, Ibrahima Konate’s parents and club interveined, comforting him as he recovered in no time. Speaking about the experience, the defender once said.

I had an operation which slowed me down a bit, but it allowed me to come back stronger.

Frankly, I have no regrets as i successfully graduated from the academy.

The French football told FranceBleu in an interview.

After academy graduation, Young Ibrahima got shipped to the club’s reserve team B (Sochaux B).

Yet again, things took a sad note when as he saw his club struggling and finding it hard to absorb him into their senior squad.

Like most frustrated young footballers, Konate took matters into his own hands. The resultant effect has to-date been the most vital piece of his biography, one he won’t forget in a hurry.

“I decided to quit because the owner was almost never there and I was in the fog.

During this time of uncertainty, clubs that sought to recruit me became increasingly insistent. Among them was RB Leipzig.

For the first time in his life, Ibrahima Konate had to leave his family and country behind for greener pastures abroad (precisely in Germany).

At RB Leipzig, he became a beast of a defender. Truth is, his towering 6 feet 4 inches height was able to make all opponents shiver at his mercy.

Here are two big secrets to Konate’s rise. The first is Julian Nagelsmann, the young RB Leipzig manager who recruited and showed lots of faith in him. Just like Ethan Ampadu, Nagelsmann used Ibrahima and never looked at his age.

Secondly, the French defender got inspired by fellow teammate Dayot Upamecano whom he considers an elder brother.

Both defenders (at a combined age of just 40) formed a formidable defensive partnership, a feat that pleased both coach and fans.

Almost unknown in France, Ibrahima Konate, despite his early age, is showing prospects that he could become the future “world best defender”.

Like other bright prospects have shown- talking about the likes of Mason Holgate and Matthijs de Ligt, Ibrahima has also proven that age is just a number. The rest, as we say, his now history.

The rocky defender doesn’t only make news for his 6 ft 4 height and impressive football performances.

Recently, there has been an earnest desire by both fans and the press to know whether Ibrahima Konate has a girlfriend. More so, whether he is single, or if he is married (with a secret wife) and has kid(s).

After hours of intensive research, we’ve come to the realization that Konate (at the time of writing) has not made his relationship official.

As I write this Biography, his social media account does not reflect any relationship or clue of a girlfriend, wife or WAG.

Asides from watching him on the pitch, and in a bid to know him more, fans have often asked- Who is Ibrahima Konate?. Now getting to know his personal life off-the-pitch would help you understand him better.

Starting off, it is It’s quite common to see our favourite footballers walking around town with their girlfriends or WAG.

Konate, however, prefers to walk with Dagouss his precious rabbit. Truth is, the 6foot 4 defender is a longtime rabbit advocate.

His success story wouldn’t have been as palatable as it has become without family members. In this section, we’ll provide you with facts about Ibrahima Konate’s family members starting with his parents.

First and foremost, he is of Malian origin by virtue of his birth. Thou, information about him is less documented. However, we sure know that Konate’s dad lives a comfortable life in France where he monitors his son’s progress.

We call her the protective mum. Konate’s mum is one who takes extraordinary steps to protect, nurture and raise their children.

She was glued to him at all times during his youth career. Do not forget that it was Konate’s mum who gave a final go for him to join Sochaux academy.

Moriba Konate, the beloved little brother of Ibrahima Konate, is all grown up. Pictured below, both brothers look very much alike. Try to distinguish both brothers if you can!.

This, however, doesn’t transform into a glamorous lifestyle. Why?… its because Ibrahima Konate prefers not to use his hard-earned wages to showcase expensive cars, mansions, girlfriends, buzz, etc.

Instead, the French footballer uses his monies on holiday trips to the Dubai desert. Sometimes, he prefers to spend time away from everything all in the name of restoring his energies.

If it’s not taking desert trips, Konate would rather choose to spend quality time at popular seaside destinations. Truth is, the defender doesn’t take his sea and desert life’s pleasures for granted.

Ibrahima Konate’s Childhood story and biography facts would be incomplete without revealing to you some untold facts. In this section, we’ll provide you with some factual knowledge you never knew about the defender.

Breaking Down his Salary:

Upon his transfer to RB Leipzig, Julian Nagelsmann tendered Konate a contract, one that saw him earning a whooping salary of 1 Million Euro (860,000 Pound) per year. Crunching his salary into numbers, we have the following.

This is what IBRAHIMA KONATE has earned since you began viewing this Page.

Did you know?… The average man in Germany who earns around €3,770 a month would need to work for at least 1.8 years to earn €83,333. This is Ibrahima Konate’s wages for a month base on the above salary structure.

The Frenchman is only 20 at the time of putting up this piece. Yet, his overall rating reads 79.

Now, what does this tell you?…. For us, we believe Konate has a great prospect, one which could see him getting a transfer to one of the biggest clubs in world football.

More so, the potential of being labelled among the “Greatest Defenders in the world“.

As a sign of- his strong religious beliefs, Ibrahima adheres to all the rules of Islam thanks to his parents, who brought him up in adherence to their Islamic family culture.

You might guess it’s “Ibra”, however, it’s not. Ibrahima Konate’s nickname is actually “Ibu”. This name was given to him by teammates while in the dressing room. Sometimes, they also call him “Ibuprofen”.

FACT CHECK: Thanks for reading one of our numerous Childhood Stories Plus Untold Biography Facts.

At LifeBogger, we strive for accuracy and fairness. Asides from Ibrahima Konate’s Bio, we have other biography stories for your reading pleasure. The Life History of Wissam Ben Yedder, Houssem Aouar and Allan Saint-Maximin will interest you

if you find something that doesn’t look right, please share it with us immediately by placing your comments.