Our Son Heung-min Biography tells you Facts about his Childhood Story, Early Life, Parents, Family, Girlfriend/Wife to be, Lifestyle, Net Worth and Personal Life.

In the nutshell, this is a Life Story of Son Heung-min. Lifebogger begin from his boyhood days, to when he became famous.

To whet your autobiography appetite, we’ve made his childhood to adult gallery — a perfect summary of Son Heung-min’s Bio.

Yes, fans know of the winger’s versatility and ability to use both feet equally well. However, only a few individuals have read Son Heung-min’s biography, which gives a complete picture of him. Without further ado, let’s begin.

Starting off, Son Heung-min was born on the 8th day of July 1992 at Chuncheon, the capital city of Gangwon in South Korea. He is the second of two children born to his mother, Eun Ja Kil and to his father, Son Woong-Jung.

Young Son grew up at his birthplace in Chuncheon. It was at the city that he had a sporty childhood and a productive teenage alongside his only sibling & older brother – Heung-Yun Son.

Growing up at Chuncheon, young son began playing football as soon as he learnt how to walk. Thanks to the sport, Son had no interests in playing computer games or having toys around him.

At some point in the football prodigy’s childhood, his dad – Son Woong-Jung did ask whether he really had sights set on having a career in football. Son’s reply was “yes” and his dad was glad to train him.

Training the youngster was not hard for Son Woong-Jung. This was largely due to the fact that he was a one-time professional footballer.

As such, he drew on his past experiences in training Son alongside his older brother. On her part, Son’s mom was happy to watch and take care of her boys after each tiring training session. Speak of the tiring training sessions, did you know that Son and his older brother were diligently made to practice the basics of football for no fewer than 6 hours on every day of the week?

In addition, the youngsters were given 4 hours of non-stop Keepy Uppies (also known as Juggling).

In fact, they often saw three-balls through tired red bloodshot eyes after about three hours of the activity. Apparently, Son Heung-min’s dad (an athlete) was the brain behind pushing his children. By the time Son was 14 years, his dad gave him the freedom to begin playing matches.

In other words, Son was not free to play competitive games until he was 14 years because his dad had the belief that the activity does ruin the potential of young athletes by over-working their muscles. 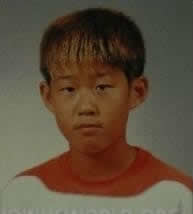 Thanks to being a fast learner – in addition to having a good foundation of football basics, Son had no problems fitting into the youth systems of Hamburger SV’s youth academy after joining the German side in November 2009.

Thereafter, Son’s career began recording progress in leaps and bounds especially after Hamburger SV gave him his first professional contract on the day of his birthday in July 2010.

The ambitious lad went on to spend two more years with Hamburger before clinching a record move to Bayer Leverkusen in 2013. It was at the club that Son left eye-catching marks just within two years.

This drew interests from many clubs including Tottenham Hotspur which Son lent his signature to.

When Son officially set foot on good old White Hart Lane in September 2015, he had just one famous feat to his credit.

It was none other than for being the most expensive Asian player in football history at the time.

Riding on the wave of fans expectation and personal ambition, the winger put up an excellent run that did help him make a good impression in his first two seasons for the English Side.

Son went on to become the top Asian goalscorer in Premier League history in his third season.

Not long after, he became the highest-scoring Asian player in the history of the Champions League during his fourth season.

Fast forward to the time of writing this Sonny’s Biography, he is seen as one of Tottenham’s valuable assets as well as the greatest South Korean to have played the game in Europe. Whichever way fortune tilts for him, the rest, as they say, would always be history.

Records made available to LB as of May 2020 shows that Son is single at the time of writing but has two women in his dating history.

They include Korean pop stars Bang Min-ah and Yoo So-young. Although it is certain that the winger and Bang Min-ah are history.

The same cannot be said of his relationship with Yoo So-young because the duo are masters of the art of keeping their relationship private.

Above all, it would take a while before Son makes a wife out of any of his known or unknown love interests. Son did once reveal that he is following his dad’s advice to fulfil his football dreams.

According to Son, his dad did advise him to focus entirely on his career and avoid having a wife or kids because they would not be in his best interest until retirement.

Son Heung-min childhood story would always be of great inspiration to aspiring footballers, all thanks to his family who made it possible. We bring you facts about Son Heung-min’s family members beginning with his parents.

Son Woong-Jung is a father, coach friend to the football genius. He was born on the 10th of June 1962.

The father of two had a significant career playing professional football in South Korean before his career was cut short by an injury when he was only 28.

He has ever since taught aspiring football players in eastern Gangwon Province and has what it takes to join Tottenham football club coaching staff in the nearest future.

Eun Ja Kil is the parent from whom Son got 75% of his cute looks. Like most supportive mom, Eun Ja Kil has always been there for her children.

She is proud of how far Son has come in professional football and wish him the very best in his endeavours.

Son has no sisters but an older brother who goes by the name Heung-Yun Son. Like Son, Heung-Yun had an extensive career build up on the basics of football under the tutelage of his dad before he began featuring in competitive games.

He was last known to be at the German side – SV Halstenbek in 2013. Since then, not much is known about his less illustrious career in football.

Moving on to Son Heung-min’s ancestry and family roots, there aren’t records of his grandparents. Similarly, details of his ethnicity are quite sketchy.

In addition, the winger’s uncles, aunts and cousins are not known while he is yet to reveal his nieces and nephews. Away from Son Heung-min’s family life and his on-pitch persona for tormenting opposition defences, opinions and facts regarding Son’s off-pitch persona paint him as a likeable individual who is caring, resilient, ambitious, emotionally intelligent and ambitious.

The versatile winger whose Zodiac Sign is Cancer does regularly engage in a number of activities that many have come to regard as his interest and hobbies.

They include travelling, working out, playing video games, watching movies and spending a good time with his family and friends.

Regarding how Son Heung-min makes and spends his money, do you know that he has an estimated net worth of $20 million as of 2020?

It is general knowledge that the most of Son’s wealth have origins in the salaries, wages and bonuses that he receives for playing first-team football.

However, not many know that Son does earn significant bucks from endorsements. As such, he has much money that he can spend on acquiring assets like cars and houses.

Although Son chose to live with his parents in a three-bed apartment at Hampstead, there is ignoring the fact that the garage of the apartment has numerous exotic ride that he uses to navigate the streets of London.

To wrap up our Son Heung-min childhood story and biography here are little known or lesser-known facts about him.

Sonny’s contract with Spurs sees him earning a whooping salary of £140,000 per week. Breaking that into smaller numbers, we have the following.

Since you started viewing Son Heung-min‘s Bio, this is what he has earned.

Did you know?… The average South Korean citizen who earns around 9,800,000 KRW would need to work for about seven years and eight months to make what Son Heung-min earns in a month.

Son was able to earn an exemption from participating in South Korea’s compulsory 21 months of military service by leading South Korea to win gold at the Asian Games in 2018.

However, he did complete a mandatory basic 4-week military training in May 2020. The short basic service is meant for young Koreans who have been able to earn an exemption from the near two-year service.

Photo of Son Heung Min on completion of his Military training.

Son’s rise to prominence has done well to inspire the rise of a number of South Korean football talents to compete professionally in European Football. Notable among them is Lee Kang-in who plies his trade as a midfielder for Valencia.

The big names we know in football have excellent ratings that justify why they are seen as big. Son is not an exception with his excellent overall FIFA rating of 87 points.

However, fans do believe that he deserves an extra point to level up with Raheem Sterling who boasts of 88 points.

Thanks a lot for reading this edifying write-up about Son Heung-min’s Biography. At Lifebogger, we desire to ensure accuracy and fairness in our day to day routine of delivering biography facts and childhood stories.

Have you seen anything that looks odd in this article? Please contact us. Otherwise, take a moment to comment on what you think about our writeup and the South Korean footballer.