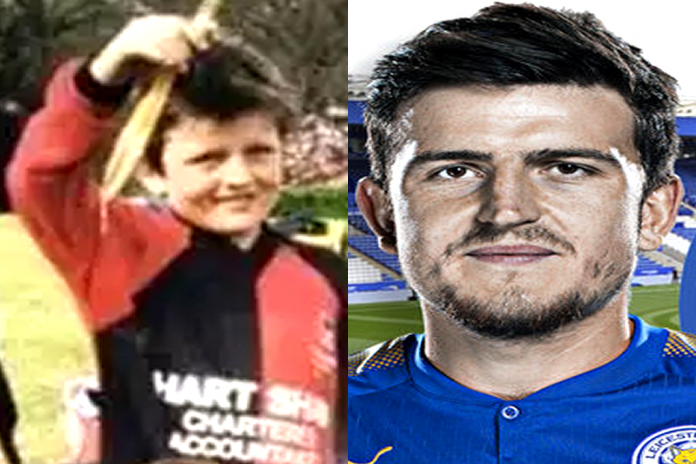 LifeBogger presents the Full Story of a Football Genius who is best known by the Nickname; “Hefty Hard Man”.

Our Harry Maguire Childhood Story, including his Untold Biography, brings to you a full account of notable events from his childhood time to the moment he became famous.

Yes, everyone knows about his long legs and immense 6′ 4″ stature, but not many fans have read Harry Maguire’s Biography, which is quite interesting. Now, without further ado, let’s Begin.

For Biography starters, Jacob Harry Maguire was born on the 5th day of March 1993, in Sheffield, the United Kingdom, into a Roman Catholic family.

Harry Maguire’s childhood story is interesting, if not uncommon – We give you a story of a young dreamer who became blessed with extraordinary talent, one who never gave up his hopes of becoming a footballer.

He possessed a steely determination to make his dreams come true, and his ambitions were not just a passing fancy.

Casting back to the late 90s, Maguire would often come home with his elastic tie and grey school trousers covered in mud.

Instead of getting cleaned up, he’d go straight in the garden or the ‘greenfield’ outside his childhood home in Chapel Street in Mosborough with a ball at his feet for a football tournament called “May Day”.

The school playground, greenfield area and the ‘May Day’ tournaments in which his brother Joe (a year older and semi-professional with Buxton at the time of writing) played alongside him, still hold a special place in his heart.

Above is a photo of Harry (back row second from the left) with brother Joe during one of Immaculate Conception Catholic Primary School May Day football tournaments.

A quick stint at Brunsmeer Athletic led him to Barnsley and then Sheffield United.

During his youth club days, Harry was fortunate enough to play a lot of games with players like Kyle Walker, John Stones, and Jake Livermore.

He was a young boy who made his way through the division’s ranks. It is pertinent to state that his 6-foot 4-inch centre-half came through the youth ranks. This was coupled with fantastic maturity for his age.

As a boy, Harry was level-headed. He took everything in his stride, and nothing fazed him.

In his words…“The reason why I am comfortable on the ball is that when I was a young boy I played centre midfield until I was 16-18, which marked the time I had my 6′ 4″ height.

This was a time I ended up playing centre-back all because I was always the biggest, chubbiest and tallest on the pitch.”

More so, Harry looked up to John Terry and Rio Ferdinand. They were very comfortable on the ball and could bring the ball out from the back.

As Harry puts it; “They were the best partnership around when I was growing up.”

Maguire fulfilled his childhood dream growing up in Sheffield and coming through the youth system at Sheffield United before graduating to the first team.

Maguire went on to win Player of the Season at Bramall Lane in 2012/13 and 2013/14. He was also included in the PFA League One Team of the Year for three seasons running.

This led to a £2.5 million move to Hull City. His hopes of getting an England call-up came when he signed for Premier League club Leicester City. The rest, as they say, is now history.

The big centre-back, 25, is in a long-term relationship with fellow Sheffield native, who goes by the name Fern Hawkins – pictured below.

Fern and Harry have been together for almost seven years since writing his Bio. Harry has been a big financial helper to her academics, which proved fruitful as she graduated in honours. 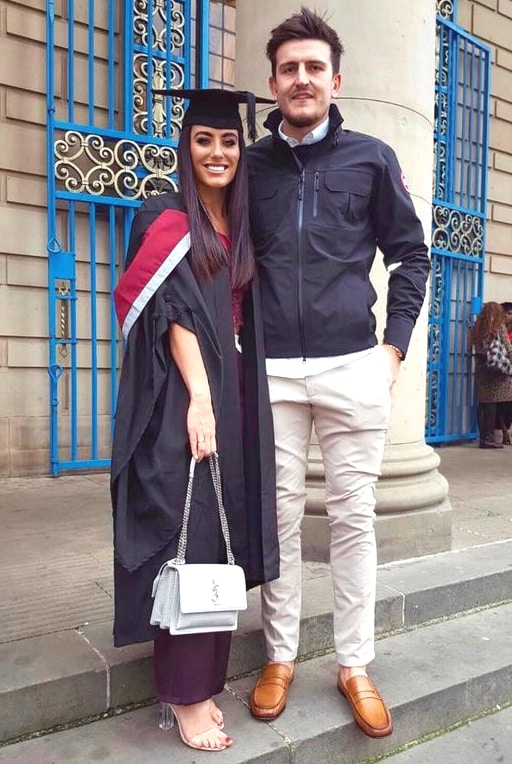 Fern regularly posts pictures on Instagram showing the pair together.

Harry comes from a humble beginning, with a middle-class family background. Little is known about his dad, unlike his mum, who many believe is a disciplinarian.

Harry Maguire’s father is a former footballer and the reason why Harry played at Brunsmeer, which happens to be his dad’s old club.

As Harry puts it…“That’s the reason my brother and I came here. We both played in the same age group”

Harry Maguire landed in hot water with his mother over how he turned up for his first senior England get-together.

In an era where many top players use designer luggage, England’s national team new boy Maguire went viral by arriving at the national team’s Park lair carrying some of his gear in a bizarre bin-bag!

He was left at the mercy of Social media comedians who joked that he looked more like a student turning up at his university halls during Freshers’ Week. 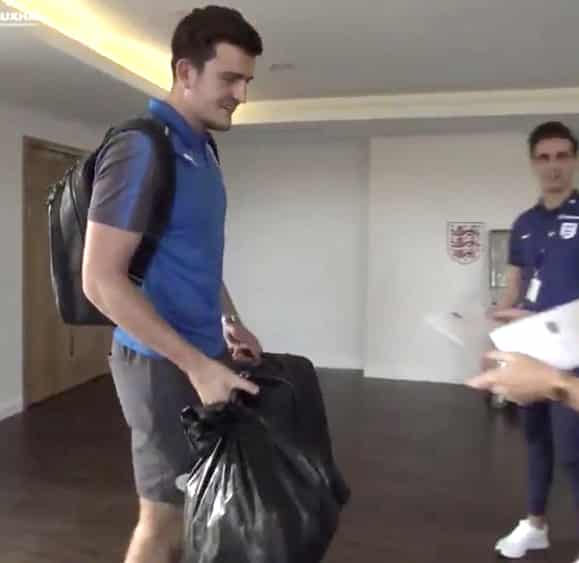 In his defence, Harry Maguire first sorted out things with his mum by saying…

“There were about 10 of us who walked in with a bin bag. It’s just that I was the one who got caught on camera, and everyone else got off lightly because I happen to be the new lad”

Reports had it that it was Jamie Vardy who first used a bin bag to bring his boots and shin guards.

“I asked Vards (Jamie Vardy) what he brought his boots and shin in, and he was the one who said a bin bag, so I took his word.”…

Maguire, on his next match with the national team, corrected his bin-bag impression.

After correcting himself, The down-to-earth defender responded by saying…

“The bin bags were filled with my boots, shin pads and dirty stuff, which I’ll give the kit person.

What is more important is me trying my best to keep my feet on the floor, staying humble and letting my ability and not bin bags do the talking.”

Joe, 27 as at the time of writing (two years older than Harry) plays in the non-league (Boston United). Harry is incredibly close and his siblings, mum and dad.

As far as mismatches go, this is definitely up there. Theo Walcott is a lithe, athletic slip of a man with hardly anything to him.

Hull City’s Harry Maguire is built like two brick shithouses cemented together. It’s not a fair fight in anyone’s book. 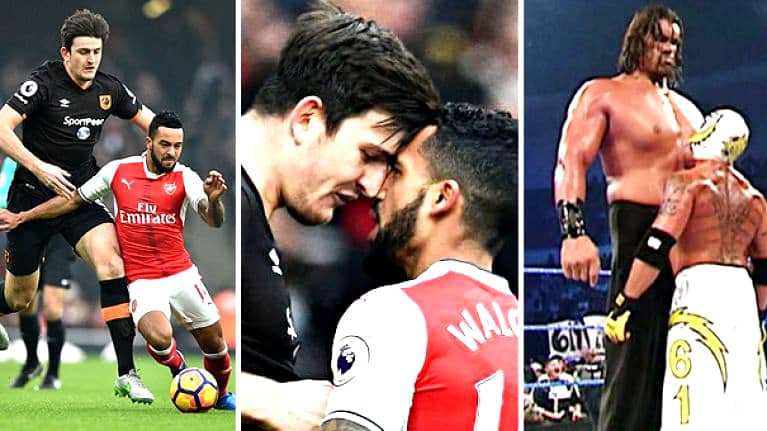 But that didn’t stop a very  Walcott from playing the hard man and going toe to toe with the hefty central defender.

It was actually Theo who started it when he pushed Maguire and then took exception when the big man pushed back.

Thankfully, Walcott’s immediate safety was saved as the referee stepped in to avoid a fatal TKO. 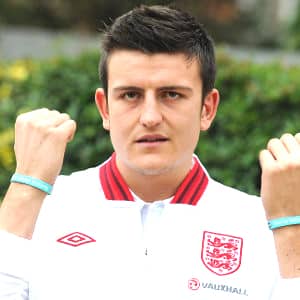 Weaknesses: Maguire could be fearful despite his giant looks. More so, he could be overly trusting, sad and has the desire to escape reality.

Maguire likes: He likes to sleep.

What Maguire dislikes: People who claim they know-it-all-all, being criticized, the past coming back to haunt and cruelty of any kind.

In summary, Harry Maguire is very friendly. He finds himself in the company of very different people.

Harry is selfless and always willing to help others without hoping to get anything back.

Thanks for reading our Harry Maguire Biography. At LifeBogger, we strive for accuracy and fairness in our quest to deliver English Football Stories. Kindly stay tuned for more. The Life History of Harry Kane and John Stones will excite you.