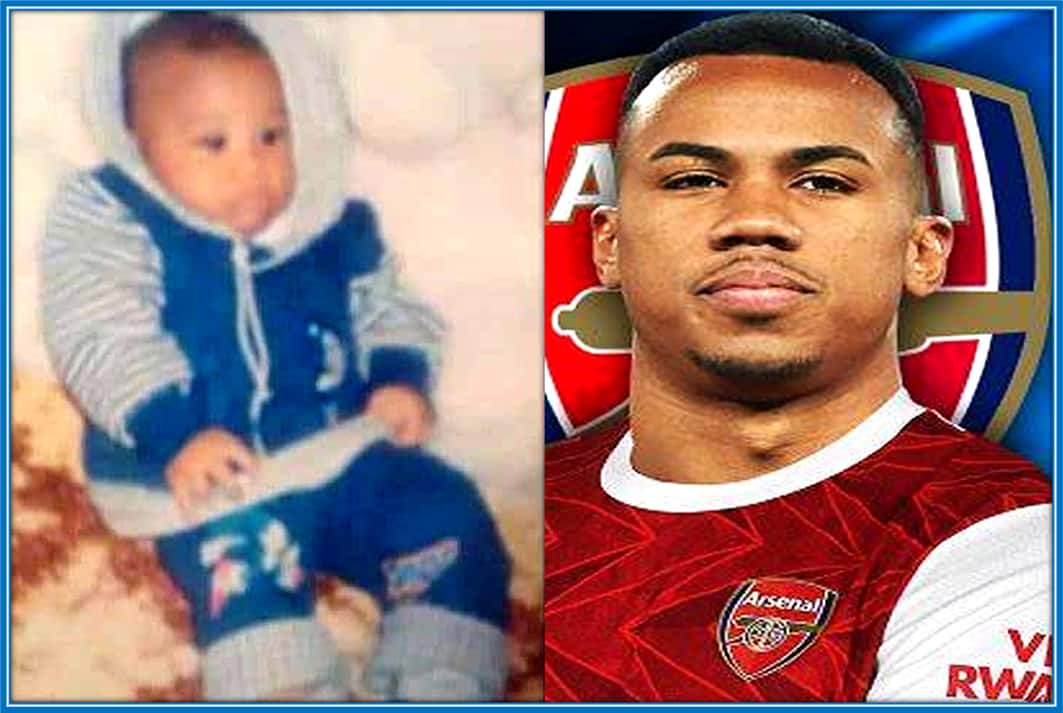 In clear terms, this Bio is a complete analysis of the Personal Life Story of the Brazilian footballer right from his Early Days, to when he became Famous. To whet your appetite, find below his childhood to adult progression, a gallery that summarizes his Life History.

The year 2020, without doubt, unravelled lots of unexpected circumstances in Arsenal’s football. Interestingly, Mikel Arteta way of appeasing the fans was making happen the grand arrival of the iconic defender.

Now having heard a lot about his transfer, it is likely that Football Fans haven’t read much about Gabriel Magalhaes’s Biography. Hence, we’ve put up this great article and without further ado, let’s begin.

For starters, his full name are Gabriel Dos Santos Magalhaes. The Brazilian Footballer was born on the 19th day of December 1997 to his parents, Mr and Mrs Marcelo Magalhaes in the Pirituba District of São Paulo, Brazil. Little Gabriel (pictured below) is one amongst many children born out of the union between his father, Marcelo and a little known mother.

Yes, you and I know that everyone is born with a unique gift. However, the time taken to discover and use one’s gift depends on the owner. Fortunately, Gabriel Magalhaes found out about his football talent at a very young age which his mum and dad supported.

While reminiscing on his Childhood days, Gabriel recounts playing football with his friends each time he gets back from school. Truth is, words can’t explain the joy and fulfilment that grips him whenever he plays football. It was like soccer became the greatest force that pivoted the dealings of Gabriel’s Childhood.

Fortunately, the entire household of the future Arsenal Player did not turn a blind eye to the exceptional skills that he was showcasing. The good news is that Gabriel Magalhaes’ parents took his love for football like the family’s future depends on it. Hence, they sought for an opportunity to help their son advance into professional football. We give you more gist on this later in his Bio.

As it is always done, we’ll discuss the ethnicity of the Brazilian from his paternal heritage. Judging by his place of birth, Gabriel Magalhaes Family roots originate from Sao Paulo. In case you didn’t know, this is where the City is situated in Brazil.

Gabriel like most of his family members is fluent in speaking São Paulo’s indigenous dialect – Portuguese. However, footballing endeavors have made it compulsory for the Brazilian to learn French. In a nutshell, Gabriel can communicate in both Portuguese and French.

For the Youngster, growing up in the streets of Pirituba- a district located Northwestern side of São Paulo was full of childhood sporting memories.

Back then, he often tags himself along with friends to play football. Seeing the possibility of a football career, neighbours had to advise Gabriel Magalhaes’ parents to enrol their son in a football academy. Fortunately, his father yielded to public advice and registered young Gabriel in a football school.

Do you know?… After spending only two weeks in the soccer school, an opportunity for a football trial opened up for the young lad. Gabriel and his father travelled over 400 miles to meet up with his trial at Florianopolis based club, Avai. You won’t believe the fact that the Brazilian football prodigy put up an impressive performance and gained a permanent place in Avai Academy.

Interestingly, the young Brazilian left home for Avai Football Academy at 13. It was his first time away from family members. Truth is, the feeling he had whenever he thinks of his household was unbearable. Sadly, Gabriel couldn’t let go of his dad, mum and siblings for football. Hence, he gave up on football and went back to his abode.

On reaching home, everything seemed bizarre for young Gabriel. First, he had to recruit himself to solitude and pondered on his decision. Thankfully, Gabriel’s father gave him a handful of advice. Adhering to his dad’s words of encouragement, the young Brazilian set out to return to Avai Academy. Thus began the genesis of his football career.

Upon his return at Avai, the Young Lad began to focus on the game like how other Brazilian Gabriels had done- the like of Barbosa and Martinelli. Truth is, defending wasn’t his first role. He began playing in the front like most of his mates had done- the likes of Vinicius Junior and David Neres.

Unfortunately, Gabriel’s performance during training did not reflect the character of a great attacker. Hence, his coach had to convert him to the left-back position all because he was left-footed and more suited for defensive roles. Thankfully, Gabriel’s hard work and consistent training yielded fruit. By the time he was 18, Gabriel debuted for the club.

A few years after playing for Avaí, Gabriel this time, left his family for a faraway country- France. He signed into the League 1 team – LOSC Lille.

Upon his arrival in France, Gabriel was fascinated and shocked by the cold weather and language – French – of the society. Hence, it took him time to adapt to the climatic condition of the environment. Besides that, Gabriel also took up private lessons to learn French.

Following his return from the loan in June 2018, the Youngster got the opportunity to put up an impressive performance. As a matter of fact, Gabriel scored his first goal for Lille in a match against the prestigious Paris Saint-Germain team in April 2019- one of those he wont forget in a hurry.

Rising through the ranks of Lille’s first eleven, the Brazilian Icon soon got enough playtime. His improvement became undisputed. Did you know?… He played with the likes of Victor Osimhen who has been the talk of the town in 2020.

Rising up to the level of Marquinhos, Gabriel began to attract the interest of influential clubs like Manchester United FC and Arsenal FC during the 2020 transfer market openings. It was Arsenal’s Mikel Arteta that seal the deal of signing him for a long-term contract in September 2020. The rest, as they say, is history.

Since his Rise to Fame, the Brazilian shine has allowed fans and bloggers to inquire about his love life. Judging by his fresh cute looks and style of play, there is no denying the fact that ladies wouldn’t want to queue up to take positions of potential girlfriends and wife and mother of his kids or children. 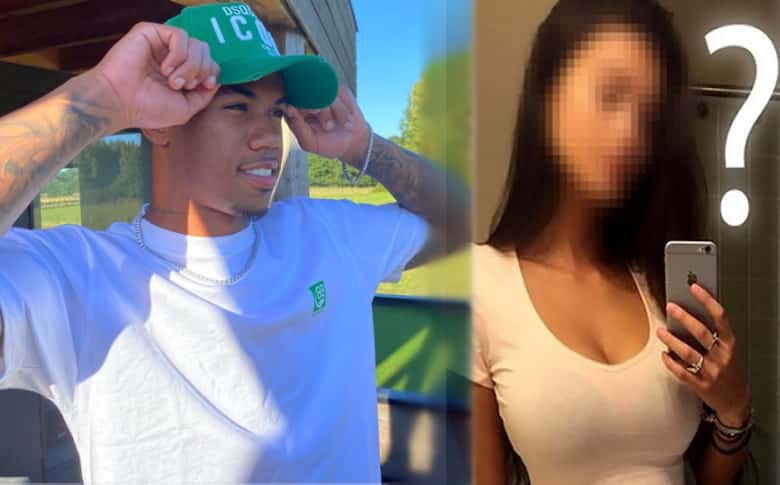 Truth is, Gab has kept his relationship life personal. The dedicated football player is aware of the fact that he has to work an extra mile to record a grand career achievement. This, of course, should come before revealing his girlfriend. For now, he tries as much as possible to avoid any form of relationship distraction.

Judging all the interviews undertaken by Gabriel, he has never expressed an interest in marriage or raising a family. He probably feels it’s too early for him to commit himself to a marital relationship.

Yes, most Arsenal fans have been singing the praise of the iconic player. Honestly, you wouldn’t have known him if not for the support from his family members- especially his parents. Let’s tell you more about them!

Again, another unrivalled figure in the life of the Brazilian is his mum. The first to we observed about her was the shy approach to media. Although she is not a fan of taking snapshots, Gabriel’s mom has always wished him success. This motherly care has in recent time, brought its dividends as seen below.

Just like every responsible mum would do, Mrs Marcelo Magalhaes has often counselled her child about several sensitive issues in his life.

Truth is, he wasn’t born alone in his household. Gabriel Magalhaes has siblings- a brother, Vinicius and sister named Mayara. An unfathomable relationship exists between them. We got to know after a look at the Footballer’s Instagram- a page which shows Gabriel’s siblings as his most loyal fans.

To elaborate more, Gabriel Magalhaes’ brother, Vinicius (Not Real Madrid’s V-Junior), and sister, Mayara immediately followed Arsenal’s Instagram page the moment he sealed a transfer deal with the club. Surely, the Footballer is well cherished and as the Family breadwinner, he leads by example.

Because of his discrete personality, there has been no valid information about Gabriel’s maternal and paternal grandparents. Similarly, the newly acquired Arsenal player has not seen the need to talk about his Uncles and Aunts as well as his Nephews and Nieces.

Just like Neymar and many other fashioned players, the Defender is a fashionista. His outfit and appearance outside the football pitch is a complete testimony of Gabriel’s love for fashion. Who knows?… maybe the Defender may have considered delving into modelling if football hadn’t worked out.

Funny enough, Gabriel Magalhaes has shown interest in other non-soccer related activities. Once upon a time, he disclosed that his hobbies include playing video games and travelling. It is also fascinating that the football player has developed an interest in watching basketball games. The picture below gives an overview of Gabriel’s love for video games and basketball.

Although Gabriel is yet to reach the prime of his career, he has made a reasonable amount of financial proceedings through football. Gabriel’s earning can give him a balanced life, even though his salary can not measure up to the likes of Lionel Messi, C. Ronaldo, and Neymar.

Gabriel Magalhaes Salary and Net Worth:

It is just a matter of time before he would experience an improvement in his wages and salary. At the time of putting up this Bio, Gabriel Magalhaes has an estimated Net Worth of €17.50 million.

As of 2020, the Brazilian Footballer has amassed different luxurious Autos worth an estimated sum of $500 million. As observed below, he owns a good number of exotic cars as part of his assets.

To wrap up our Memoir, here are a few truths that would help you get a full understanding of the 6 ft 3 in Man.

To show how rich the Footballer has become, we’ve done an analysis of Gabriel Magalhaes’s Arsenal salary- to show what he has earned since you came here.

This is what Gabriel Magalhaes has earned since you began viewing this Page.

Surely, he is not left out when it comes to caring for pets. Gabriel has a small dog that doesn’t look much intimidating. He doesn’t just love and cherishes it but usually tag it along with him each time he takes a walk.

The Arsenal Defender is Big at displaying his considerable number of body inks. Even after wearing his football jerseys, the glamour of his left-hand inking can be clearly seen by everyone.

Unlike many defenders such as Sergio Ramos, Djibril Cisse, and Marcos Rojo, Gabriel is only interested in light tattoos. That is why he has only tattooed his left arm compared to the aforementioned defenders who have tattooed almost all parts of their body.

On the pitch, the young Player has displayed quite a good football prowess that has earned him a fair rating on FIFA. As you can see from the picture below, Gabriel has the potential of stepping up his skills and becoming a much more valuable player.

To get quick facts, here is a summary of Gabriel Magalhaes’ profile for your perusal.

Our Biography of Gabriel Magalhaes teaches us that we should face adversities and challenges no matter how they come. Because Gabriel Magalhaes parents intervened during his trials, his young career was saved. Truth is, only a few persons do get second chances like the Brazilian.

The entire team of LifeBogger thank you for reading Gabriel Magalhaes Childhood Story. We would appreciate if we see some feedback about your perception of the Footballer in the comment section.

Every footballer has a childhood story. LifeBogger captures the most gripping, surprising and fascinating stories about football stars from their childhood times till date. We are the world's best digital source for Childhood Stories Plus Untold Biography Facts of footballers around the world.
Contact us: lifebogger@gmail.com
© Copyright ©2016-2020
error:
wpDiscuz
0
0
Would love your thoughts, please comment.x
()
x
| Reply
MORE STORIES