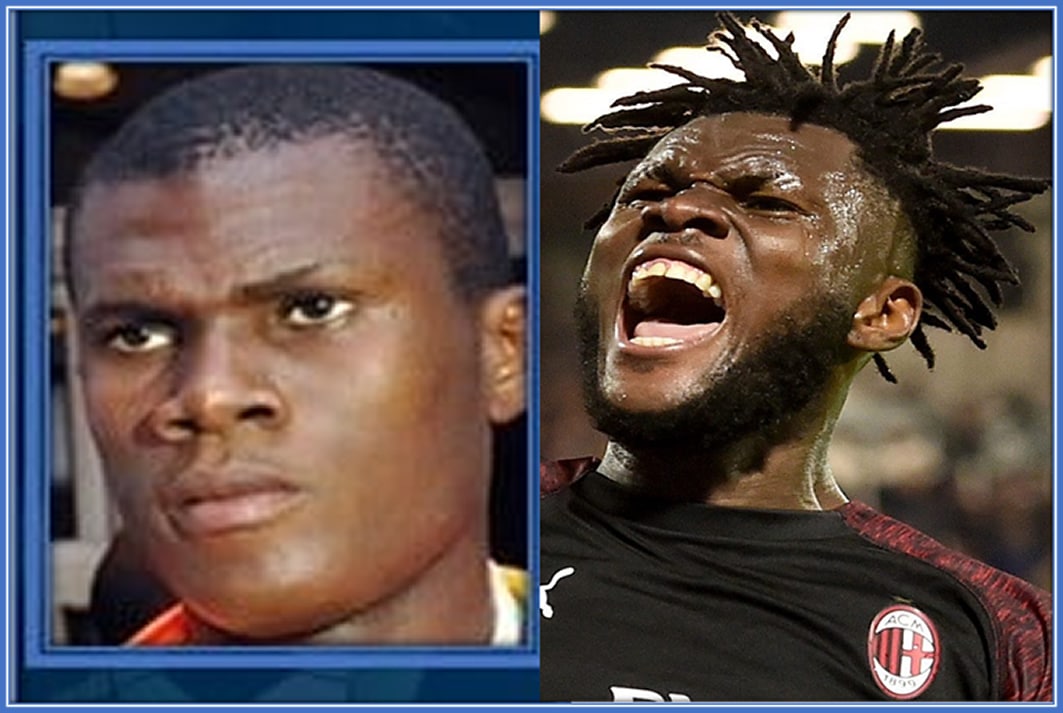 It is a concise life story of an Ivorian who is extremely good in the midfield. Our biography of him begins from his early days, to when he became famous.

To give you a taste of the engaging nature of the bio, here is a pictorial summary of his life and career progression.

Yes, everyone knows of his ability to shut downplay in the midfield and put pressure on the opposition.

However, only a few football fans have read Franck Kessie’s Biography, which is quite engaging. Without further ado, let’s begin.

For bio starters, his nickname is Franky. Franck Yannick Kessié was born on the 19th day of December 1996 in the town of Ouragahio in the South Central Ivory Coast. He was born to his parents, Mr and Mrs Kessie.

The player is an Ivorian national of black ethnicity. In fact, His family roots are deeply established in the West African country, which is home to the legendary Didier Drogba.

Also, are you aware that he shares the same birthplace as Serge Aurier and David Datro Fofana? Now you do!

Are you aware that Kessie spent most of his childhood at his birth town in Ouragahio?

Interestingly, he had childhood dreams of becoming a professional footballer and spent quality time on the streets and fields with a ball at his feet.

The player was born into a middle-class family. Thus, he had a fair chance at succeeding at any endeavour he wanted to pursue. Fortunately, he chose soccer, and the sport chose him too.

Contrary to misinformation making rounds on the internet, Franky was not a later starter in soccer. As a matter of fact, he spent years playing on clay pitches of local selections, including Zady FC.

However, there weren’t opportunities for career advancement. Therefore, he moved to Abidjan, where he joined the Stella Club Adjamè. This club was one of the strongest Ivorian teams at the time.

Only a few people know that Franky began his career with Stella as a central defender. In fact, scouts from Atlanta took notice of him when they were on the lookout for a defender, not a midfielder.

Upon arriving in Atlanta, Kessie was assigned to the club’s Primavera squad, where he was impressed. At about the same period, Franky was also doing great for his country’s team.

Although the young talent was called up to Nerazzurri’s first team, he never got an opportunity to make his professional debut.

Fortunately, the club had him loaned out to Serie-B side Cesena, where he not only became a cornerstone of the team but adapted to a new playing position as a midfielder.

On completion of his glorious spell at Casena, Franky returned to his parent club and got a deserved professional debut. He established himself with the club before moving to AC Milan in 2017.

Since his arrival at the Black and Red, Kessie has proven to be worth every penny that the club paid to acquire him.

As a bonus, he acts like a leader at AC Milan where he is president of the dressing room and official penalty kicker. Whichever way things turn out for him in his subsequent career, the rest, as they say, will be history.

Franky is no stranger to matters of love and dating. In fact, he has had many adventures with beautiful ladies before he tied the knot.

The name of his wife is Joëlle. We gathered that she also grew up in the town of Yopougon.

Interestingly, the soccer star has been keeping their marriage secret. Kessie’s union with Joelle is blessed with a child.

A bunch of Fans and admirers only knew Franky after he became famous. However, there are a few people who have known him since he was born.

They are family. We bring you facts about Franck Kessie’s parents. We will also provide details of his siblings and relatives here.

Franky’s dad used to be a footballer before he became a soldier. Sadly, he died of an illness when Kessie was only 11 years old.

Therefore, Franky performs a military-style salute whenever he scores to honour the memory of his late dad.

On the other hand, there isn’t information about his mom. Nonetheless, we believe she was a supportive person. In fact, you need not stare long at Kessie to understand that he enjoyed the protective care of a mother.

Away from his parents, Franky has not mentioned having a brother or sister.

Neither has Kessie given his fans a peek into his extended family life, especially as it relates to his maternal and paternal grandparents.

Also, we are eager to know about his uncles, aunts, and cousins. In addition, it would be kind of him to volunteer information about his nephews and nieces (if he has siblings).

There are two words that can describe Franky’s persona. Rocky and tender. By rocky, we mean he is a core professional when it is demanded of him.

This explains why he didn’t lose his calm when he was racially abused by Inter fans during the Milan derby defeat.

He is also tender, emotionally intelligent, and jovial. In fact, it is safe to describe the free-spirited soccer star as a man of all weather.

However, it is important we note that Kessie guards his personal and private life. His love for spending time outdoors and hanging out with friends/colleagues should not make you confused for an absolute free-spirited individual.

It is amazing to note that Franky is a great young achiever. It’s not hype but fact. Especially when you realize that his annual salary amounts to €2.2m.

It is said that wealthy football stars don’t go about proving that they are filthy rich. The saying definitely holds sway for Kessie as he is not big on flaunting his exotic cars.

Neither has he revealed the luxurious nature of the house/apartment that he lives in.

To wrap up this article on the midfielder’s childhood story and biography, here are little-known or Untold facts about him.

Since you started viewing Franck Kessie’s Bio, this is what he has earned.

In time past, we would have easily written 78/82 rating as fair. However, we can’t help but admit that such a rating is unfair to Kessie.

How would we inform the future generation of soccer enthusiasts that a genius like Kessie had such a rating to his name in 2021? We hope the deserved upward review of his rating comes sooner than expected.

The African footballer is a Christian. However, he has no issues celebrating with Muslims during Islamic festivities.

In fact, Kessie once posed alongside teammate Hakan Çalhanoğlu to congratulate his Muslim fans on the occasion of EidMubarak.

Significance of No 11 Jersey:

The number 11 is significant to Kessie. To start with, he was born on the 11th, his dad died on the 11th. Also, it was on the 11th day of a certain month that Kessie arrived in Europe after signing for Atlanta.

Thanks for reading this informative piece on Franck Kessie’s childhood story and biography. We hope that Franky’s exciting journey from west Africa to Europe has convinced you that anyone can achieve his childhood dream.

Just like Franck Kessie, who fantasized about playing for AC Milan during the days of George Weah. He has fulfilled the dream such that wearing an AC Milan shirt feels like a second skin.

It behoves us now to commend Franck Kessie’s parents for his excellent upbringing.

At LifeBogger, we take pride in delivering childhood stories and biography facts with accuracy and fairness.

If you see anything that doesn’t look right, do well to contact us or leave a message below.