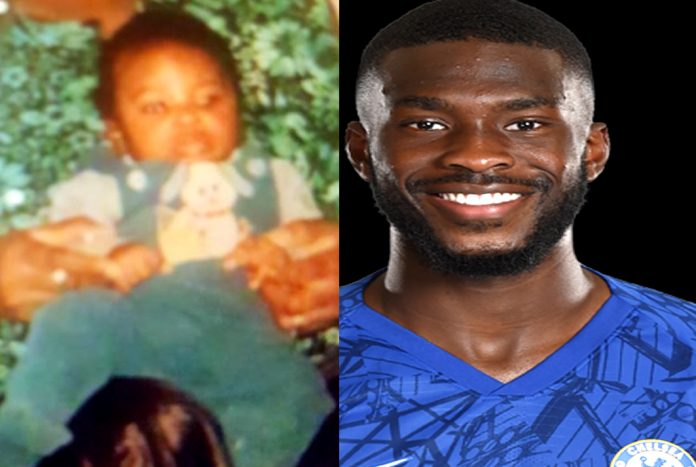 Our Fikayo Tomori Biography tells you Facts about his Childhood Story, Early Life, Parents, Family, Girlfriend/Wife to be, Lifestyle, Personal Life and Net Worth.

In a nutshell, we give you the full history of Fikayo Tomori, the Canadian-born footballer of Nigerian family origin.

Lifebogger tells you the story of his early days, to when he became famous in the game. To give you a taste of the engaging nature of Fikayo Tomori’s Bio, here is a pictorial summary of his life.

Yes, everyone sees him as that full-back who hardly makes mistakes and with whom Frank Lampard and AC Milan are well pleased.

However, only a few consider Fikayo Tomori’s Biography, which is quite interesting. Now, without further ado, let’s begin.

For Biography starters, he bears the nickname “Fik“, and his full names are Oluwafikayomi Oluwadamilola Fikayo Tomori. He was born on the 19th day of December 1997 in the city of Calgary, Canada.

Below is a photo of little Fik and his beautiful mother when he was just a baby. According to a Chelsea fan, the photo is too Nigerian.

Fikayo Tomori was born as the first child and the only son of his lovely parents, Mr and Mrs Oluwadamilola Tomori, who have their family origin from Osogbo, Osun State, southwest Nigeria.

Before his birth, Tomori’s parents first resided in Lagos, Nigeria, before moving to Canada, where they had him. Both parents seem to be in their late 40s as at the time of writing.

The Baller of Naija origin hails from the rich or upper-class or rich family background. One whose wealth is tied not just to football but to his extended family, whose members have strong political domination in Southwest Nigeria.

Did you know?… one member of the Tomori extended household by name; Otunba (Mrs.) Grace Titilayo Laoye-Tomori, MPA, BA, P.G.D.E was the former Deputy Governor of the state of Osun, Nigeria.

Back to his early life! After spending seven years in Canada, Fikayo Tomori’s parents felt the need to be exposed to a new culture and change of environment. His parents relocated with their son from Calgary to London, United Kingdom.

While in London in the year 2004, Fikayo Tomori attended a school that offered him the opportunity to passionately play competitive football during sports periods. This led to his interest in picking up a career.

The year 2004 also saw a rejuvenated Chelsea FC dominating English football thanks to The Special One, who favoured Africans like Didier Drogba.

Every member of his household supported the club, and Tomori himself had his own plan. He made up his mind on wanting to become a member of the London club’s academy.

For him, the most effective way of getting scouted for a trial at Chelsea FC Academy was to join a Chelsea Soccer School.

While there, scouts selected him among young players. Next, they were invited for trials at the Chelsea FC development centre.

Fikayo Tomori Joined Chelsea FC academy in the year 2001 as a seven-year-old kid. Upon joining, he was deployed to the club’s under-8 level.

Tomori successfully navigated his way through Chelsea’s youth setup, moving up the ranks very quickly throughout his career.

Did you know?… Fikayo Tomori, during his early years with Chelsea academy, began to bond with fellow academy player, Tammy Abraham, who happened to be his best friend. Below is a photo of both friends during their childhood years with Chelsea FC academy.

How time flies! Their friendship progressed to their teenage years, as reflected in their shirt numbers.

Both early on held their dreams of reaching the very top of their career, the senior team. Their friendship can be compared to that of Mason Mount and Declan Rice.

The year 2015 and 2016 became the turning point in the youth career of Tomori. He helped the Chelsea youth team in recording back-to-back triumphs in both the UEFA Youth League and the FA Youth Cup.

To show how good he was, Tomori scored in both finals and was named the 2016 Chelsea FC academy player of the year.

Tomori’s youth success story didn’t end there as success continued. In 2017, He helped his England U20 team in winning the FIFA U-20 World Cup for the first time in their history in the event that took place in South Korea.

Again, another youth success followed the next year, 2018. This time, he helped his England U21 side to win the Toulon Tournament. Despite all these achievements, they were still fears in the mind of Tomori. Now let’s tell you why.

Why Fear?: It’s been well-documented that Chelsea FC is fond of the loan system for her academy graduate and is reluctant to play them in the first team.

This is a reason why fear grips the mind of all academy stars at the moment they are considered ripe for the first team.

As a graduating academy player, Tomori’s fears came hunting him. He, together with his best friend Tammy Abraham, didn’t get enough game time.

They were shipped off to other clubs so they could gain experience. Tomori became a new member of the Chelsea FC loan army despite being one of the best in his academy years.

In an attempt to get game time and experience, Tomori got acquired on Loan by Frank Lampard who at then was on the mission to raid Chelsea loan armies after his appointment as Derby County boss. Lampard acquired Tomori on loan base on trust.

Fikayo Tomori finally earned a breakthrough into the Derby County first team. He hit the ground running as soon as he arrived at Pride Park, helping them to reach the ​play-off final of the Championship.

Did you know?… Tomori’s outstanding season didn’t go unrecognized. He was named The Derby’s Player of the Year at the end of his first season with the club.

This earned him a club record of becoming the first loan player to win this award. He achieved this under the guidance of Chelsea FC Legend Frank Lampard.

The relationship between Lampard and Tomori didn’t stop there. Both player and manager reunited at Stamford Bridge after their time at Derby. This happened after Lampard replaced Sarri for the Chelsea job.

Judging from the 2019/2020 season, it is clear that the Lampard holds Tomori, Mason Mount, and Tammy Abraham in very high regard.

It’s only a matter of time before Tomori becomes the fan’s and manager’s preferred centre-back choice for the London club. His broken dream has now been set to be fulfilled, and the rest, as they say, is now history.

Who is Fikayo Tomori’s Girlfriend and Wife to be?

With his rise to fame, it is certain that most Chelsea fans would have made inquiries on whom Fikayo Tomori’s girlfriend might be.

Yes! There is no denying the fact that his dark-handsome looks coupled with his style of play wouldn’t make him a darling vine to ladies.

Based on information available on Tomori’s social media handles, it appears he has preferred to focus on his career (as at the time of writing).

This fact makes it difficult for us to collect any info regarding his relationship life or dating history. However, according to TheSun, it is alleged that the footballer is dating Love Island winner Amber Gill.

Getting to know Fikayo Tomori Personal Life away from his football career would help you get a better and complete view of his innate personality.

Starting off, Fikayo Tomori is someone who is away from career activities, and tries to spend time alone and away from everything in a search for the true meaning of life.

Tomori is able to transform his thoughts into concrete actions, one of which he puts up on the pitch of play.

From a philosophical point of view, Tomori, during non-career moments, loves to get in touch with the world in a bid to experience it as much as possible.

When it comes to family, Fikayo Tomori is dedicated and willing to do almost anything humanly possible to make his dad, mum, and very pretty baby sister happy.

His immediate, as observed below, family lives a very happy life in London thanks to the success of their own.

All family members are proud of their first-class Nigerian roots and are never shy to display them. This is evident as both dad, mum, and baby sister all want Fik to play for the Nigerian national team.

Fikayo Tomori’s mum and baby sister live a low-key life. His dad loves to involve himself in his son’s career progression.

The Excitement to watch his Son: Did you know?… While at Derby County, Tomori helped his team win Manchester United in a dramatic elimination from the Carabao Cup via penalty shootouts.

Nobody was more elated than his dad, who jumped up and down in excitement thanks to his son’s monumental victory. See the video below.

Tomori, after the match, posted a video to social media of his Dad jumping and dancing across one of the family’s living rooms.

Tomori, at the time of writing, has a market value of 30 million pounds, which is meant to increase.

Getting valued this much does not in any way translate into a glamorous lifestyle, one that is easily noticeable by a handful of exotic cars, mansions, and heavy swaggers.

For Tomori, there is always enough money to live a normal life. Again, to let you know, we do not tie his financial success to his performance as a footballer, judging that he comes from a rich family.

1997, the Year Tomori was born, did saw the release of the Drama/Disaster movie. This movie is titled “Titanic”. It still remains one of the most fascinating stories in history.

That year 1997 also marked the death of the people’s princess whom the world referred to as “Dynasty Di“. Late Princess Diana was killed in Paris. In a car crash while being followed by paparazzi.

Honours and Awards: Tomori is one of those youth footballers who have excelled in almost every team he played for, racking up several trophies and individual honours as observed below at the time of writing.

FACT CHECK: Thanks for reading our Fikayo Tomori Childhood Story plus Untold Biography Facts. At LifeBogger, we strive for accuracy and fairness.